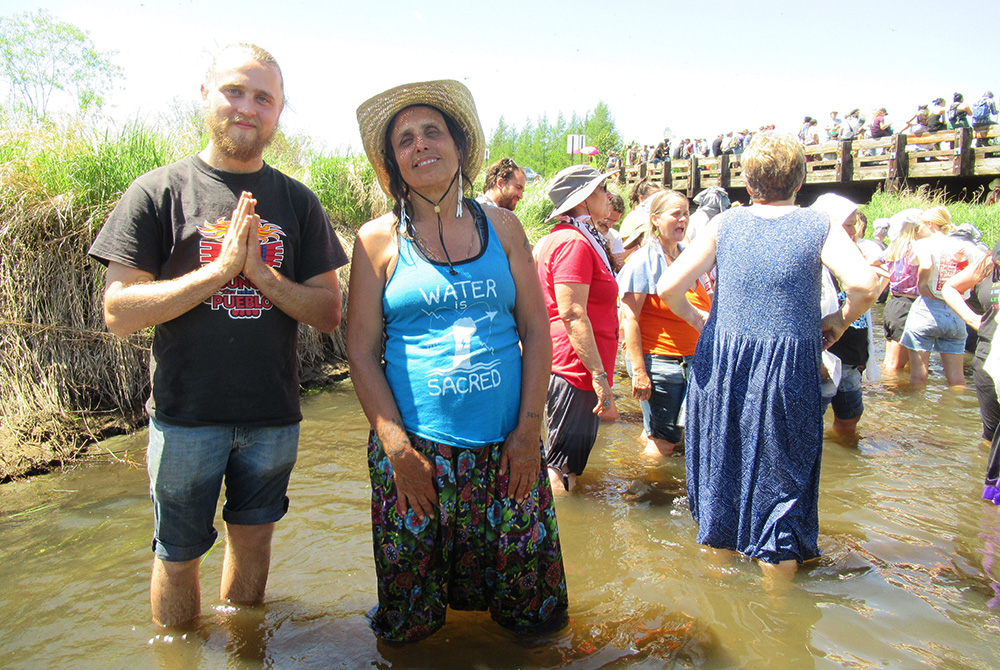 Indigenous activist and writer Winona LaDuke cools off with other protesters in the Mississippi River headwaters. (Claire Schaeffer-Duffy)

The Mississippi River begins her 2,340-mile journey to the Gulf of Mexico as a clear stream spilling off a small glacial lake in northern Minnesota, then zigzags north before looping like a question mark ending at the city of St. Paul. South of the state capital, the river carves, cleanses and widens, fed by tributaries that together drain 1.2 million square miles of land in 31 states — about one-eighth of North America.

In the summer of 2020, I traveled to the lower Mississippi to report on a local fight to stop construction of a huge plastics manufacturing complex planned for a Black majority district of a Louisiana parish north of New Orleans.

In southern Louisiana, the river serves industry's purpose. More than 140 oil refineries and petrochemical facilities crowd an 80-mile stretch of waterway between New Orleans and Baton Rouge. Communities adjacent to the plants suffer from high rates of cancer, respiratory ailments and mysterious rashes. The ecosystems have not fared so well either. Driving out of New Orleans each morning, I passed exhausted estuaries full of leafless trees.

Activists in the river communities, many of them women, have been fighting industry's hazardous incursions for years. They face a formidable foe: environmental racism, compounded by Louisiana's history of granting exploitative multinationals hefty tax exemptions and the willingness of locals to sacrifice their health for the benefits of high-paying work.

A priest who grew up along the lower Mississippi and doesn't want to live anywhere else told me he always presumed cancer would be an inevitability in his life. The women activists I met were not so acquiescing. I found an animating hope in their insistence on a different kind of vitality, one that considered the well-being of human bodies, estuaries, fisheries and the river itself.

Women at the forefront

Having observed the southern struggle, I headed north in early June to the Mississippi headwaters, to briefly join hundreds of people who have been fighting to stop construction of the tar sands oil pipeline known as Line 3. Pure Bliss Ranch, a camping and outdoor event center on the White Earth Reservation, was the weekend meeting site for the Treaty People Gathering, a mass nonviolent protest against Line 3 held June 5-8.

Owned by the Canadian energy company Enbridge, Line 3 is part of a six-pipeline corridor that crosses northern Minnesota, daily transporting some 3 million gallons of tar sands oil from Alberta, Canada, to a terminal in Superior, Wisconsin.

The decades-old pipelines are showing signs of wear, and Enbridge wants to build a replacement for Line 3. Its route twice crosses the Mississippi and traverses 200 bodies of water, 75 miles of wetlands and territories that are under treaty obligations with the Anishinaabe, Minnesota's largest Indigenous group.

The project has faced vigorous opposition ever since Enbridge proposed the new line in 2014. Opponents include climate activists eager to end reliance on fossil fuels and tribes eager to assert their sovereignty and protect their watersheds and wild rice tributaries from pipeline oil spills like those that fouled the Prairie and Kalamazoo Rivers in 1991 and 2010.

As in Louisiana, women are at the forefront of this struggle. Here the leaders are Indigenous women. Among them is Winona LaDuke, a well-known Ojibwe author, economist and environmentalist.

Related: Stopping the last tar sands pipeline will take all of us

"This is Minnesota's Standing Rock," she added, referring to the Native American reservation in the Dakotas that became a site of protests against the controversial Dakota Access Pipeline.

Thousands of Minnesotans commented at public hearings on Line 3 that began in 2017. There were lawsuits challenging the PUC's certification, rallies at the Statehouse and, when pipeline construction began, sporadic protests at work sites. Then in May, the Indigenous women leaders of the Stop Pipeline 3 movement put out a national call for people to come to the June Treaty People Gathering. 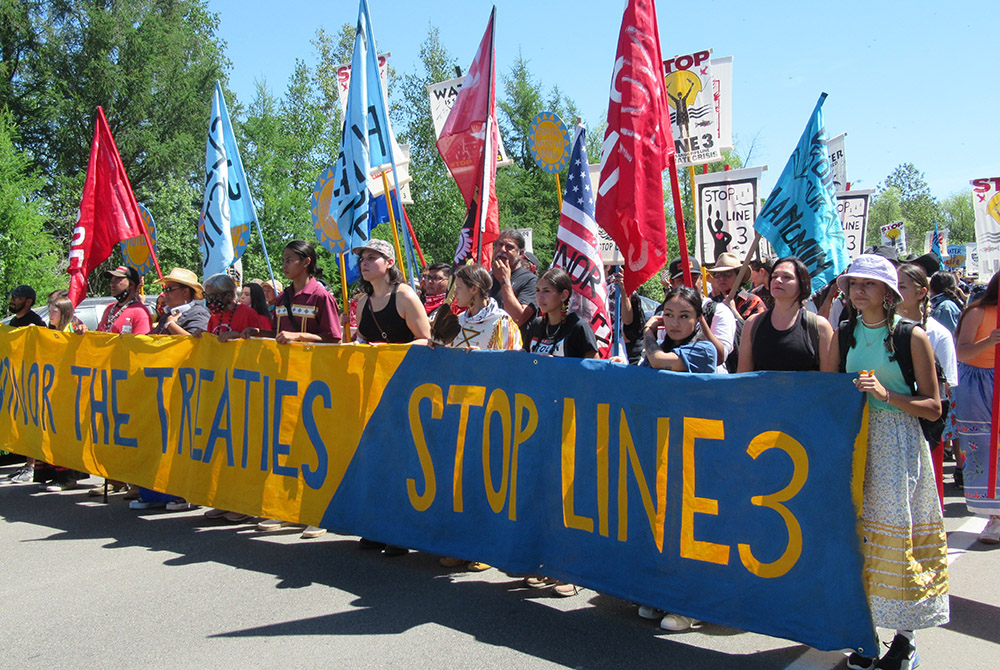 During a protest against the Enbridge Line 3 pipeline June 7, demonstrators march along a highway to call for treaty rights to be honored. (Claire Schaeffer-Duffy)

The drive from St. Paul to Pure Bliss passes through lonely, big sky country. It's north on Highway 59 into the reservation, then miles down a remote, unpaved road. Upon arriving, I find the ranch abuzz with people. Small pop-up tents circle an open field dominated by a large stage and two enormous white tents, where several hundred people sit on folding chairs. Others, including families with small children, are camped in nearby groves of trees.

The Treaty People Gathering marks the biggest convergence of people to date in the multi-year struggle against Line 3. Activists have been staging protests from small encampments for years with little national attention. The long-timers assumed few would show up for the gathering, a Unitarian minister later told me, but when they heard more than 1,000 people had registered via Facebook, they rushed to get ready.

An orientation session for newcomers includes a presentation on strategies for nonviolent direct action. "We are fighting a multinational company, which is no joke, right?" one trainer says.

At the arts workshop, a Mexican American woman with shining black braids teaches songs for the next day's march. After the first song, she asks for a prayer, then the singing resumes: "If you love the water/Miss-i-ssippi/Then have the courage/to stop Line 3." People clap. A woman with short, white hair stretches her arms heavenward and waves them from side to side. 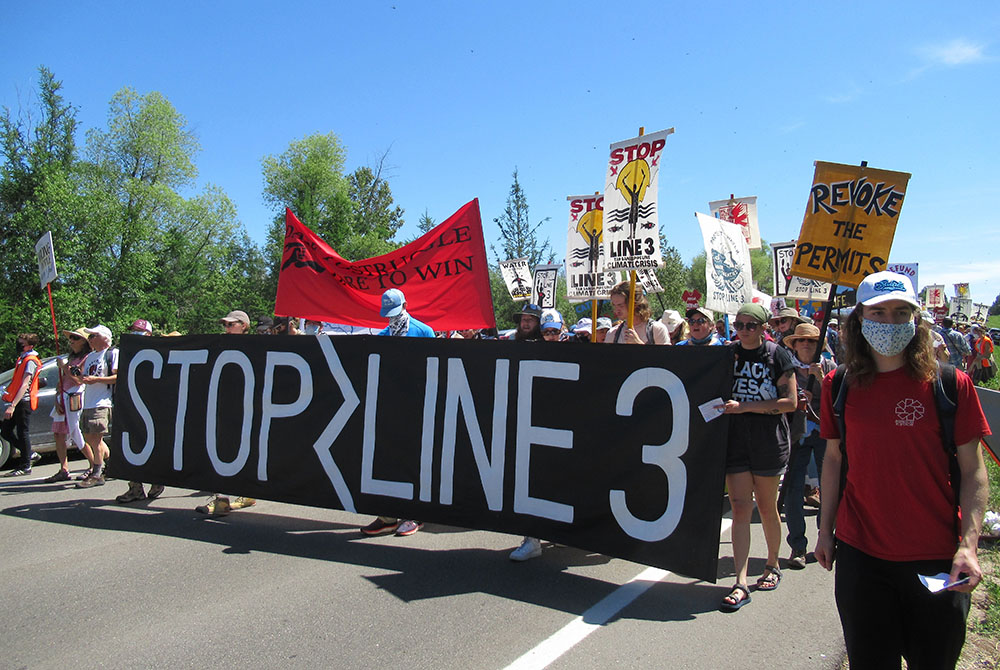 During a protest against the Enbridge Line 3 pipeline June 7, demonstrators march along a highway to call for treaty rights to be honored. (Claire Schaeffer-Duffy)

The scene is that of an old-timey revival, distinctly American, the gathered believers possessing diverse histories yet praying together with uninhibited fervor on a dusty hillside beneath a white summer sky.

The June 7 demonstration begins with a multifaith prayer service by the waters of Lake LaSalle. From there, hundreds of us walk, singing and chanting, up the hot highway toward a bridge over the Mississippi, where street artists from New York chalk in giant letters an appeal to President Joe Biden to stop Line 3. Fifty or more people head down to the river to block a drill site and stop construction for the day.

At this late stage in the fight, an executive order from Biden seems to be one of the few hopes for pausing the line's construction. Enbridge says replacing the duct is greener than pumping oil through an aging, leaky pipeline. 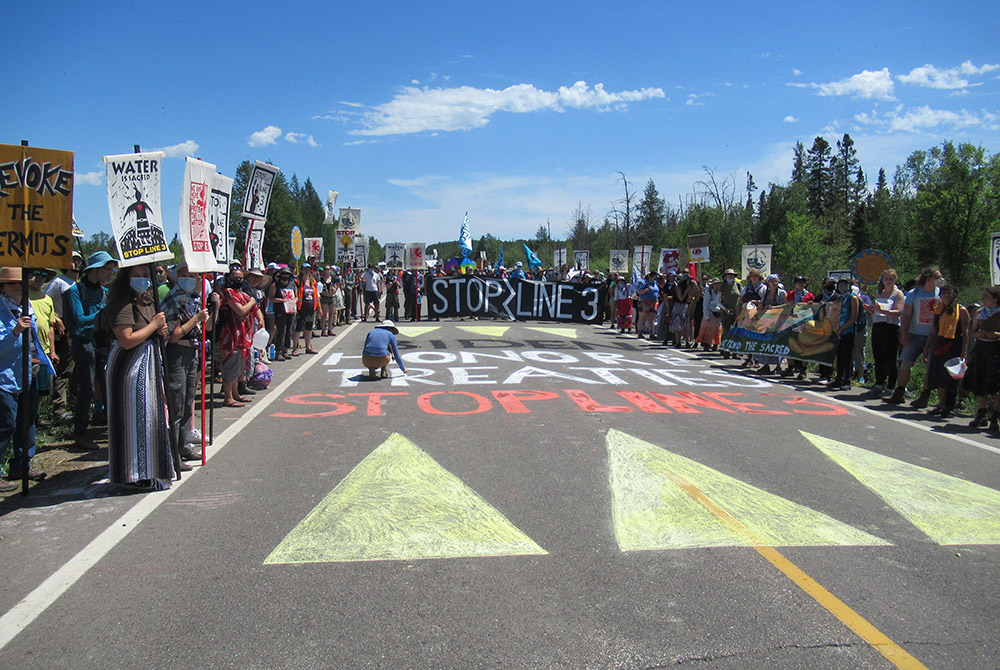 A man chalks an enormous message to President Joe Biden during a protest June 7 against the Enbridge Line 3 pipeline. (Claire Schaeffer-Duffy)

But a 2020 report by more than a dozen environmental organizations called the Line 3 expansion "a giant step backward" in Minnesota's efforts to mitigate climate change. Its annual greenhouse emissions would exceed the state's total for 2016 and be the equivalent of adding 50 new coal-fired plants or 38 million gasoline-powered vehicles, the report says.

Although he initially opposed Line 3, Minnesota Gov. Tim Walz, like the Louisiana priest with the prospect of cancer, now regards its construction as an inevitability. Will Biden, who ran on a platform of mitigating climate change, also acquiesce?

We only save what we love

En route to the bridge, the marchers stop for a prayer ceremony led by Ojibwe elder and spiritual leader Great Grandmother Mary Lyons. Like the civil rights struggle in the American South, the pipeline fight is a praying movement. The women frequently smudge sage and call on the Creator to protect the river from the pipeline's intrusion, which LaDuke has likened to rape.

The Mississippi at this point is shallow and muddy, no wider than a creek. The merciless afternoon heat drives a few of us to her cooling waters. Soon whole groups of people are rolling up pants and tying up skirts for a spontaneous communal baptism.

Fathers carry their small children, who squeal with delight at the chance to get their clothes wet. Elderly women and middle-aged ministers wearing clerical collars step cautiously down the grassy bank. Refreshed from the immersion, a Black pastor from California recites Langston Hughes' poem, "The Negro Speaks of Rivers." And there is LaDuke, standing knee-deep in the water amid a trio of young pipeline protesters. 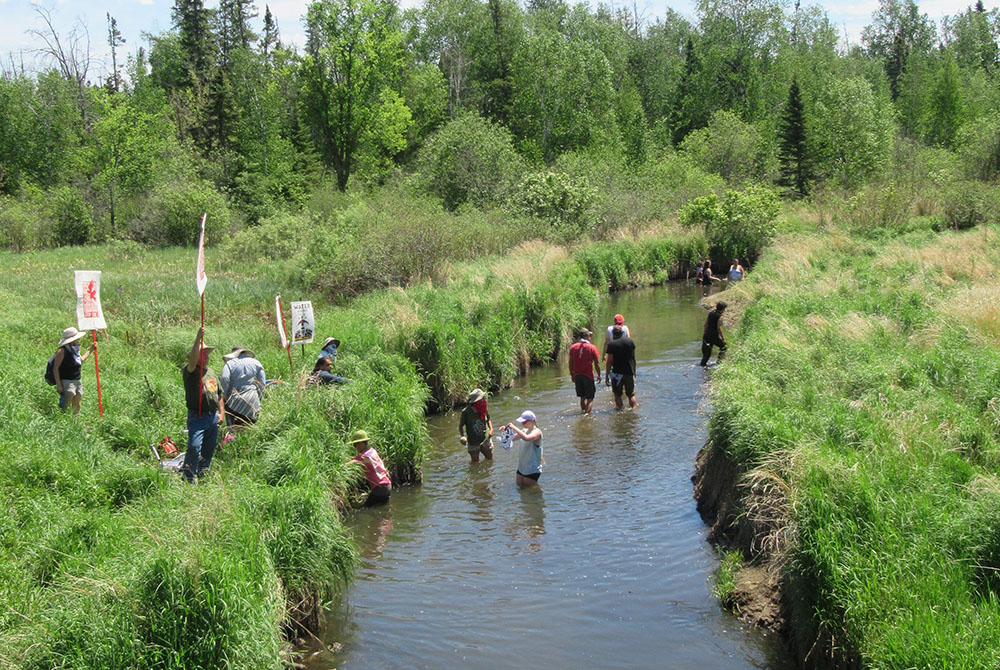 Demonstrators participating in the gathering against the Enbridge Line 3 pipeline June 7 take a break from the heat in the headwaters of the Mississippi River. (Claire Schaeffer-Duffy)

No one was arrested at the demonstration along Highway 40 that day. At the site of a second protest, police detained over 200 people who blocked the access road to an Enbridge pump station using an old fishing boat named "Good Trouble," debris from the woods and their bodies.

The activists came in waves, arm in arm. Some locked themselves to construction equipment. Among them was a great-grandmother of 11 who told a young reporter, "We had a chance to live. What right do we have to deny that to the children?"

Enbridge has completed about 80% of Line 3, advancing during a summer of drought, heat domes and burning forests. Even the saguaro cacti sweat. From small encampments along the line, people continue to disrupt the construction. The detentions also continue.

Like the activists in Louisiana, they post on social media videos of their actions and the industrial accidents that have occurred during construction. Drill fluid has leaked multiple times into wetlands. Enbridge has won a permit change that will allow it to pump out 5 billion gallons of groundwater for its operations, almost 10 times the amount it originally requested.

We only save what we love. The denial, grief and fury that many of us feel in the face of breathtaking climate catastrophes are not enough to propel the transition required for this urgent time. We have to fall in love with the places we inhabit — their landscapes and waterways, their diverse and quirky people.

"Isn't it amazing?" Fabian, a 28-year-old Black documentarian from Paris said to me that afternoon of the Mississippi baptism. "People of different ages, different cultures, different histories have come to the Treaty People Gathering. We understand the situation with our hearts, not our heads."

Delighted to find ourselves standing in the middle of the Mississippi at that moment in time, the two of us waded upstream toward the drill site.