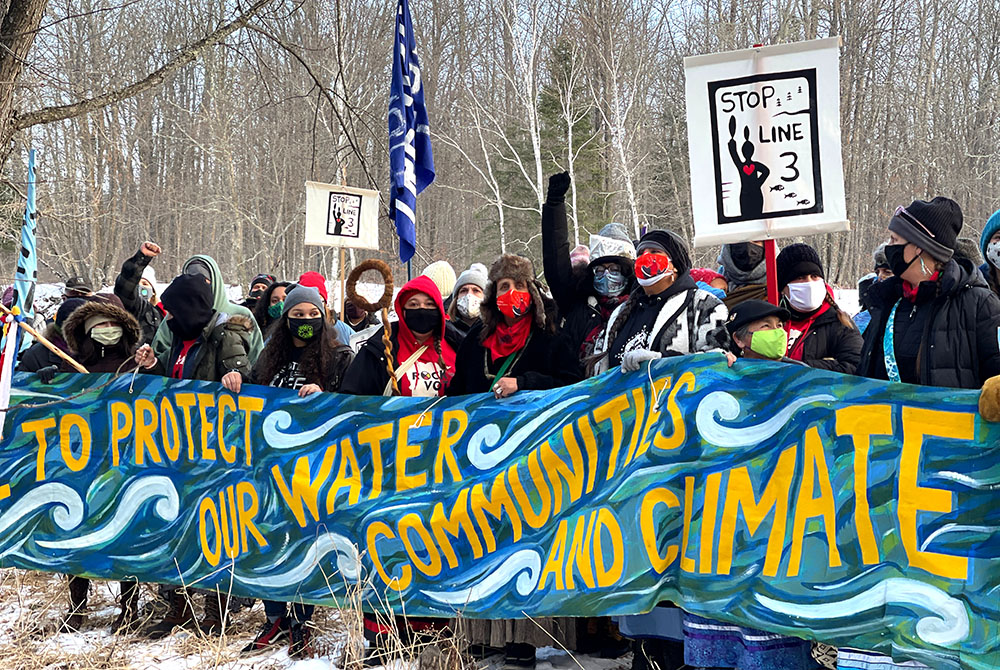 Protesters demonstrate against the Enbridge Line 3 Pipeline in northwestern Minnesota on Dec. 17, 2020. (Sarah LittleRedfeather/Honor the Earth)

Native tribes and faith leaders are together calling on President Joe Biden to intervene in the ongoing construction of the long-contested Line 3 pipeline in northern Minnesota.

Nearly 3,800 people have signed a petition organized by Interfaith Power & Light. The petition, along with a separate letter signed by 345 faith leaders and organizations, asks that the president use executive actions to stop the $2.6 billion Enbridge Energy project — a 1,097-mile replacement pipeline that, once complete, would transport daily 915,000 barrels of Canadian tar sands oil, which produces larger quantities of greenhouse gas emissions than typical crude oil.

Opponents of the Line 3 pipeline say it will exacerbate climate change — estimating its emissions will be the equivalent of pollution from 50 coal-fired power plants — and is unnecessary at a time when infrastructure investments should shift toward clean energy. Indigenous tribes, led by the White Earth Band of Ojibwe and the Red Lake Band of Chippewa Indians, add that Line 3, which would span 337 miles in Minnesota, violates their land rights under treaties and endangers wetlands where wild rice grows, and other places they consider sacred.

Appealing to Biden's Catholic faith, the petition quotes Pope Francis' 2015 encyclical "Laudato Si', on Care for Our Common Home," where he wrote that the Earth "now cries out to us because of the harm we have inflicted" through irresponsible use of the planet's resources.

"In your inaugural address, you said 'a cry for survival comes from the planet itself.' We hear that cry," the interfaith petition reads, "it is being sung by our Indigenous siblings standing in the cold Minnesota winter against this destruction of the sacred. Join their prayer and stand against Line 3."

The petition and letter are part of an ongoing campaign that has united the faith community with Indigenous tribes and environmentalists against the oil pipeline. In the six years since the fight against Line 3 began, faith groups and clergy have been present at prayer circles, public hearings and demonstrations where some have been arrested. 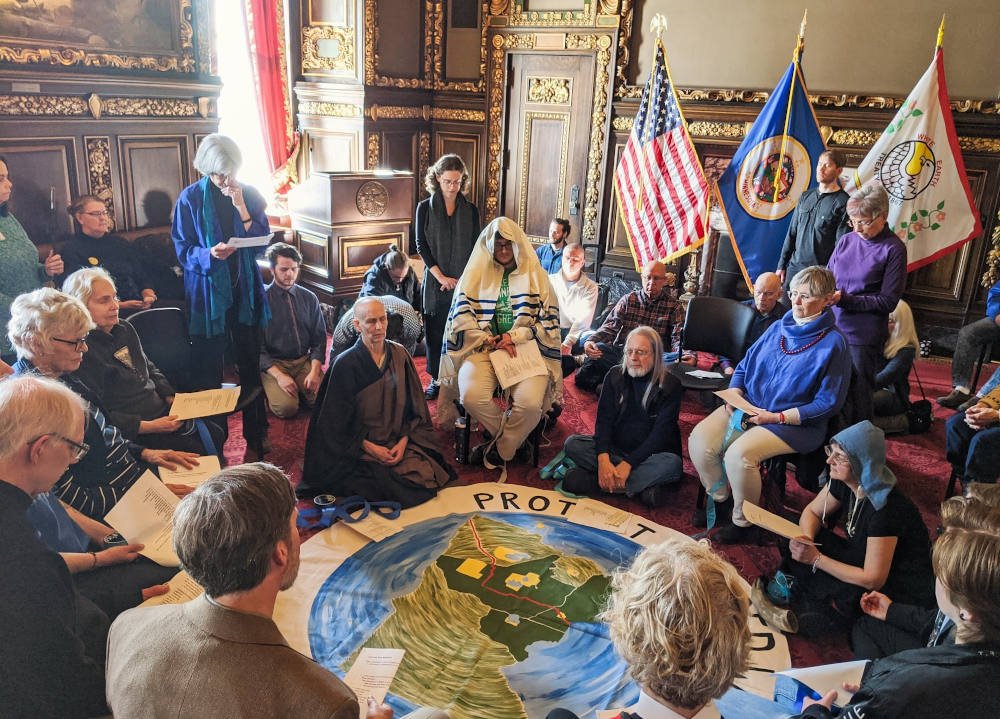 Faith leaders form a prayer circle inside the office of Minnesota Gov. Tim Walz as part of an action opposing the Enbridge Line 3 pipeline in February 2020. (Minnesota Interfaith Power & Light)

During a Feb. 10 digital rally, Tara Houska, who is Ojibwe from Couchiching First Nation and a tribal attorney, said it was "really powerful" to see people of faith come together with Indigenous communities in this stand.

Speaking from the Welcome Water Protectors Camp in Palisade, one of the frontline camps along the bank of the Mississippi River, roughly 200 yards from one of the Enbridge construction sites, Houska said they are fighting to protect the wild rice and, with it, the culture of their people.

The pipeline, she added, represents a mentality where "we're taught that we must extract to live, rather than to live in balance and to live in a way that respects all life."

"That's what this fight is really about. It's not just the expansion of the tar sands and climate crisis and fossil fuels and emissions and all those things. … Water is life. We can't live without it," Houska said.

Construction of the replacement pipeline began in early December, after Enbridge received final permits from state agencies, including the Minnesota Public Utilities Commission, which denied tribal requests to place a stay on construction until the appeals process plays out.

Tribal leaders and their allies say that Enbridge is rushing to complete construction before they have their day in court.

On Feb. 2, the Minnesota Court of Appeals also denied a request by the Red Lake and White Earth bands to halt the work until the court rules on the case. A separate case is before a federal court, and decisions in both are not expected for months.

The suit in U.S. District Court seeks to overturn key water-crossing permits issued by the U.S. Army Corps of Engineers in November. The planned Line 3 route spans more than 200 water bodies, including 22 river crossings — among them two at the headwaters of the Mississippi River that have become focal centers of the standoff. The tribes argue that while a state environmental impact statement was completed, one at the federal level was not.

"That's what this fight is really about. It's not just the expansion of the tar sands and climate crisis and fossil fuels and emissions and all those things. … Water is life. We can't live without it."
—Tara Houska

While legal challenges have not stopped construction, Mother Nature has, at least momentarily. Enbridge is barred from drilling under the Mississippi and other rivers in northern Minnesota, where temperatures are regularly below zero, while their waters are frozen.

Along with petitioning Biden, Interfaith Power & Light is planning to request a meeting with Gina McCarthy, head of the newly created White House domestic climate office. Line 3 opponents view McCarthy as a potential ally, who in her prior position as head of the nonprofit Natural Resources Defense Council had signed onto a letter urging the Minnesota governor to stop the pipeline. U.S. Rep. Ilhan Omar of Minnesota is among the local politicians who have visited the camps and asked Biden to cancel the pipeline.

Alberta, Canada-based Enbridge, one of the world's largest pipeline companies, has said the pipeline renovation is essential to safer transportation of the tar sands oil. The project is expected to employ 4,000 workers and to substantially increase pipeline capacity.

But opponents argue that transporting the oil at all poses a danger by extending reliance on fossil fuels. They add that construction will damage the ecosystem and tribal lands, in addition to the he possibility of destructive oil spills. They have also raised safety questions, after one worker died in an accident in late December, and another last week was trapped in a piece of machinery that fell into a wetland. 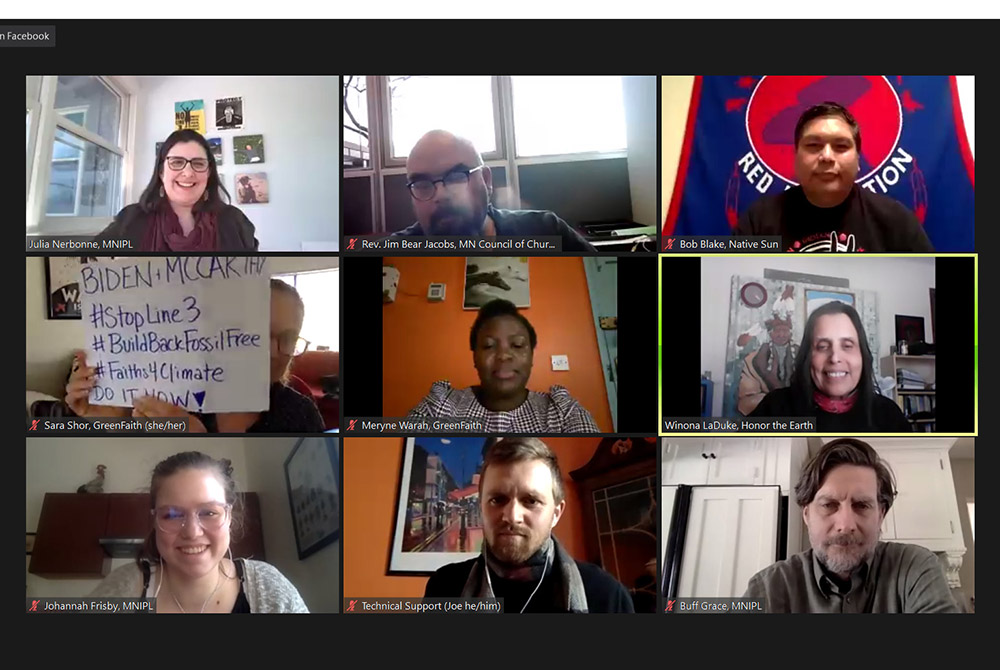 Winona LaDuke, a member of the White Earth Band of Ojibwe and executive director of Honor the Earth, speaks during a digital rally Feb. 10. LaDuke and other tribal and faith leaders spoke about their efforts to end the long-contested Line 3 pipeline in northern Minnesota. (EarthBeat screenshot)

Enbridge did not respond to a request for comment. In past press statements, the company has said it passed years of regulatory reviews and has 70 public comment meetings. It has called safety "a top priority," and in response to concerns the project would become a COVID-19 super-spreader event, it conducts regular testing and is following public health guidelines.

Demonstrations against the pipeline have been occurring almost daily, and pipeline opponents say there is an increasing police presence. On Feb. 10, two "water protectors" were arrested after locking themselves to construction equipment near Fond du Lac. Another six people were also arrested.

During the Feb. 10 interfaith webinar, numerous tribal and faith leaders spoke about the efforts to end Line 3.

"This is about water or oil," said Winona LaDuke, a member of the White Earth Band of Ojibwe and executive director of Honor the Earth.

Describing the solar project under way in Red Lake Nation that will give the tribe energy sovereignty, and her hemp farm, where she grows a variety of crops, she called both signs that "there's a much better way" beyond fossil fuels.

"We know that that is possible, to live in a different world. So there's no need for this pipeline. There never was a need for more dirty tar sands oil," LaDuke said.

Related: Stopping the last tar sands pipeline will take all of us

The Rev. William Barber, co-chair of the Poor People's Campaign, drew a connection between the destruction of ecosystems and systemic racism, saying that the forces tribes face in Minnesota, as they battle the pipeline, are the same ones facing poor white communities in West Virginia that grapple with mountaintop-removal coal mining.

More than 100 faith organizations in Minnesota are involved in the pipeline fight. It follows past alliances among faith and tribal leaders, as hundreds of clergy joined the Standing Rock Sioux Nation in protesting the Dakota Access Pipeline, which continues to be contested in federal court. Groups like Interfaith Power & Light and GreenFaith have also organized efforts to block both the Keystone XL pipeline and Atlantic Coast Pipeline.

But solidarity in opposing a pipeline has not erased old wounds of the past between tribes and the religious community. Joe Meinholz, outreach coordinator with Minnesota Interfaith Power & Light, said the roads leading to the protest sites pass Christian boarding schools that once took Native children from their families.

"And that's in the recent memory of these Indigenous women leading the fight. It's their parents and their grandparents who were in the boarding schools that received this direct harm from Christian institutions," he told EarthBeat.

A group called Minnesota Healing Stories has led some dialogues to grapple with past pains and tensions, including addressing the Catholic Church's Doctrine of Discovery, which justified European seizure of Indigenous lands. Meinholz said he sees standing with tribes against destruction of the land as a form of repentance.

Michele Naar-Obed, a member of the Hildegard House Catholic Worker in Duluth, Minnesota, has been making regular trips to the Palisade camp since late December. Two years ago, she was one of four Catholic Workers arrested and charged with property damage after they broke into a valve site and attempted to shut down two pipelines. Their trial, delayed by the coronavirus pandemic, is scheduled for May.

Like other faith leaders who have joined the opposition, she fills whatever role is needed in the camps, where several dozen people are staying — cooking, washing dishes and feeding the fires in the frigid temperatures, as well as partaking in prayer and direct actions.

Naar-Obed told EarthBeat from the Palisade camp that she became involved in the opposition to Line 3 as a way of recognizing the sacredness of all creation. She sees it as a way of living out the corporal work of mercy to visit and comfort the sick.

"It became really clear to me that our Earth, our Mother Earth, is a living, breathing entity that has sacredness, in and of itself, and she is very sick, and we have helped make her sick as human beings," she said.

Naar-Obed was hesitant when asked if she's optimistic the president will intervene, believing Biden "will have his hands full" trying to undo many of the environmental rollbacks of the Trump administration.

Editor's note: This story has been updated to clarify that Interfaith Power & Light is planning to request a meeting with Gina McCarthy, but that request has not yet been made.