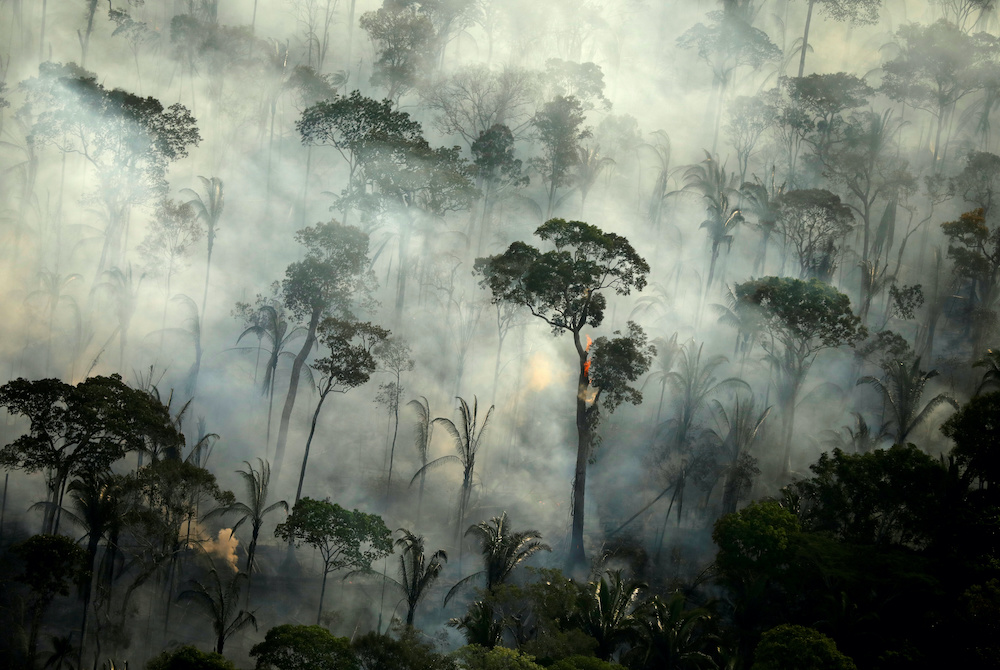 A file photo shows smoke billowing from a fire in an area of the Amazon rainforest near Porto Velho, Brazil. (CNS/Reuters/Bruno Kelly)

Catholic groups and bishops in the Amazon have teamed with actors, academics and indigenous communities to call for attention, as well as action, to the growing threats to life in the region, as they say illegal mining and land grabbing have only intensified with the coronavirus pandemic.

A new campaign, called "Amazoniza-te," or "Amazonize yourself," seeks to raise awareness of the many ways that COVID-19, the disease caused by the novel coronavirus, endangers communities and forests in the globally critical biome. It brings together a coalition of Catholic groups, indigenous peoples, scientists, researchers, actors and artists in defense of the Amazon.

The goal of the campaign, Fr. Dário Bossi of Pan-Amazonian Ecclesial Network (REPAM) Brazil told EarthBeat, is to sensitize the public, both in the Amazon and internationally, to the present reality in the Amazon — a place threatened both by the surging pandemic and continued rises in industrial activity and government deregulation.

"We are facing a situation where deforestation and land grabbing, fires, legal and illegal mining are being intensified, becoming agents of proliferation of coronavirus in the Amazon region communities," organizers said in a press release.

Archbishop Walmor Oliveira de Azevedo, president of the National Conference of Bishops of Brazil, said the campaign is an opportunity for people worldwide to express solidarity with the rainforest and its peoples at a crucial moment.

"In this invitation to 'Amazonize,' we want to overcome the systematic violation of environmental protection legislation and the dismantling of public bodies by government action to deregulate and illegally expand the activities of mining companies, agribusiness, loggers and ranchers in the region," the archbishop of Brazil's Belo Horizonte Diocese said in a statement.

The campaign is the latest initiative by the Amazon church to act on the special synod on the Amazon, held in October 2019 at the Vatican. The synod, called by Pope Francis, drew worldwide attention to the plights facing the people and natural resources of the Amazon Basin. 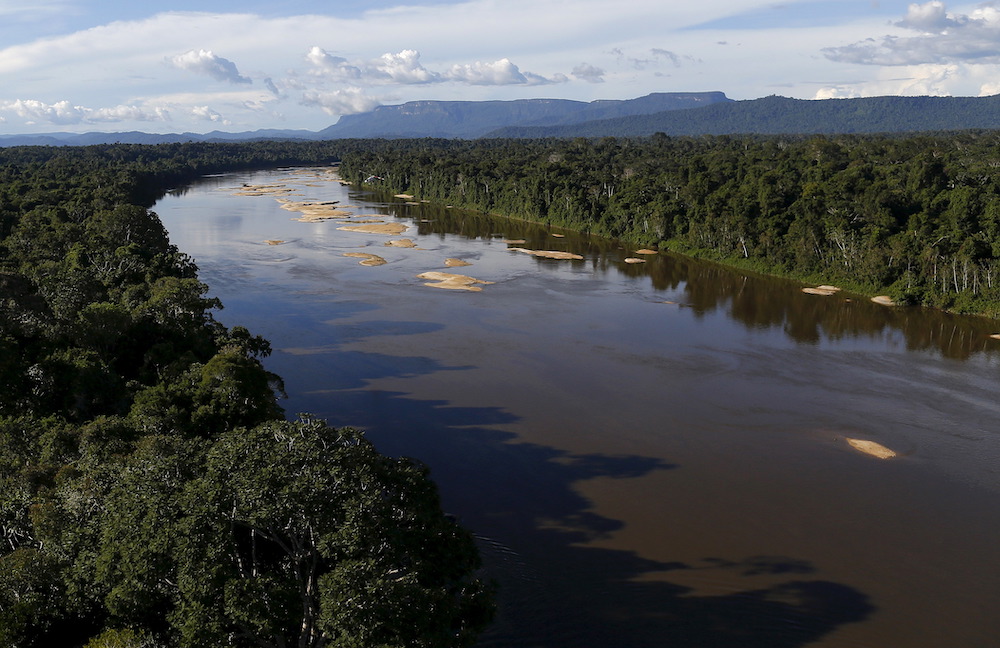 The Uraricoera River is seen during a Brazilian government operation against illegal gold mining on indigenous land in the heart of the Amazon rainforest April 26, 2016. (CNS/Reuters/Bruno Kelly)

The Amazon has become an epicenter of the pandemic in South America.

Across the nine-country region, there have been more than 27,500 confirmed cases of COVID-19 among their indigenous populations, and 1,108 people have died, according to data from official sources compiled by REPAM. Many believe the actual figures are much higher, as testing has been insufficient and people with symptoms of the virus die at home rather than a hospital.

In a May 4 letter, more than 60 Brazilian bishops, including Cardinal Cláudio Hummes, expressed their "immense concern" with the spread of the virus and the responses from the federal and state governments. The prelates said limited access to hospitals and the lack of intensive care unit beds has made COVID-19 more deadly to indigenous peoples — already more vulnerable from lower immunity to infections, especially within intentionally isolated tribes. Reports have also linked government health workers with inadvertently spreading the virus among indigenous populations in Brazil, as has transportation along the Amazon River itself.

The pandemic's spread in the Amazon puts at risk the rainforest as well, as indigenous people have long served as its primary protectors and conservationists. Organizers with the "Amazonize-te" campaign say that the increased presence in the region of miners, loggers, ranchers and farmers has also contributed to the coronavirus' spread.

"The coronavirus has exacerbated the existing socio-environmental crisis, meaning we are now starting to see an immense humanitarian tragedy caused by a structural collapse. With the Amazon being more and more deforested each day, successive pandemics even worse than this one may come," the bishops said in their letter.

Related: Brazil's Indigenous communities are being devastated by COVID-19

Although the bishops did not name specific government officials, Brazilian president Jair Bolsonaro has been the target of national and international criticism for his downplaying of the pandemic. In early July, Bolsonaro tested positive for COVID-19.

In a separate letter, leaked to Brazilian media July 26, almost one third of the country's 450-plus bishops criticized Bolsonaro and his government's "inaction and omission" in responding to the pandemic, along with their handling of the rash of crises facing its citizens and lands.

As the coronavirus has spread, Bolsonaro has continued steps to block indigenous people from their traditional lands and has loosened environmental and economic regulations in the Amazon. Critics have accused the Brazilian government of using the pandemic as cover for development encroaching farther onto indigenous lands, including recent efforts to sidestep required consultations with local communities to build electrical lines through the rainforest to power mining operations.

"At a time when governments should be looking to protect the most vulnerable, the Brazilian leadership is using it as an excuse to bulldoze through actions which will have a devastating impact on people and the planet," Moises Gonzalez with the U.K.-based Christian Aid said in a statement July 16.

In their letter, the bishops called for the Brazilian government to strengthen public health policies, restrict entry into indigenous territories, provide increased protective equipment and conduct wider testing among people living in the Amazon. They also urged political leaders to toughen inspection measures against deforestation and mining on traditional and environmentally protected lands, guarantee local participation in decision-making and reject a number of proposed and enacted measures that allow for exploitation of indigenous lands.

"After a rich process of listening during the Amazon Synod, the Church in the region is attentive to the situation and its demands. We echo the cry of the Poor and the cry of the Earth," the bishops said. "We want to ensure urgent measures are taken to stop harmful activities and, at the same time, investments are made into alternative models of progress and development in the region. The model we currently have has failed: it continues to destroy the Amazon and put the lives of its people at risk."

Related: 'We will live and die with you,' cardinal tells virtual Amazon assembly

The "Amazonize yourself" campaign launched July 27 with a webinar that included Bishop Emeritus Erwin Krautler of Brazil's Xingú prelature (now also a diocese), and vice president of REPAM Brazil. It is led by the Episcopal Conference for the Amazon of the National Conference of Bishops of Brazil. Partnering organizations include the Indigenous Missionary Council, the Pastoral Land Commission and REPAM. In addition, representatives from the arts, like acclaimed Brazilian actress Dira Paes, are also involved.

The campaign website features video testimonies from Amazon communities, along with studies and political statements for protecting the Amazon. Organizers are asking people to commit to the campaign along three dimensions: support, through solidarity with the most vulnerable communities and plans to help them cope with the pandemic; struggle, by way of mobilization and boycott campaigns of companies harming the region; and denunciation, in combating deforestation and legislation that enables mining on indigenous lands and logging in areas where it was previously illegal. The campaign has designated Aug. 14 as a day to combat increasing fires — a year after record blazes, many set intentionally to clear new farmland, burned through the rainforest. The number of fires in July outpaced last year by 28%. In addition, Sept. 22 has been designated a global mobilization day for the Amazon.

The campaign "proposes the active participation of all people in defense of the Amazon." It asks them to consider how indigenous peoples are especially vulnerable to the coronavirus, and how increasing deforestation, fires, mining and industrial projects accelerate the destruction of the Amazon biome while government deregulation dismantles the rights of the people and the land.

The term "Amazonize" dates back to a 1986 pastoral letter from Brazilian bishop Moacyr Grechi. It has come to denote the defense of the Amazon, and gained popularity during the Amazon synod. The campaign is among the latest responses to the synod. Last month, church leaders in the region formed the Ecclesial Conference of the Amazon to implement proposals made in the synod's final document.

Chiara Martinelli, CIDSE's senior advisor on climate justice, said their network is focused on raising awareness in the church within Europe and at the international level, "to give visibility to the terrible situation in the region right now." She said it was important for Catholics outside the Amazon to recognize how actions of corporations in their own countries contribute to environmental degradation and destruction of indigenous communities' ways of life.

"COVID-19 is, I would say, simply aggravating and perpetrating something that is already about an injust structure," Martinelli told EarthBeat.

She added that the "Amazonize yourself" slogan is not just an invitation to become more aware of the situation in the Amazon, but also to learn from communities in the Amazon how to people and nature can live more in harmony — a lesson all the more critical as nations explore how to rebuild economies after the pandemic. 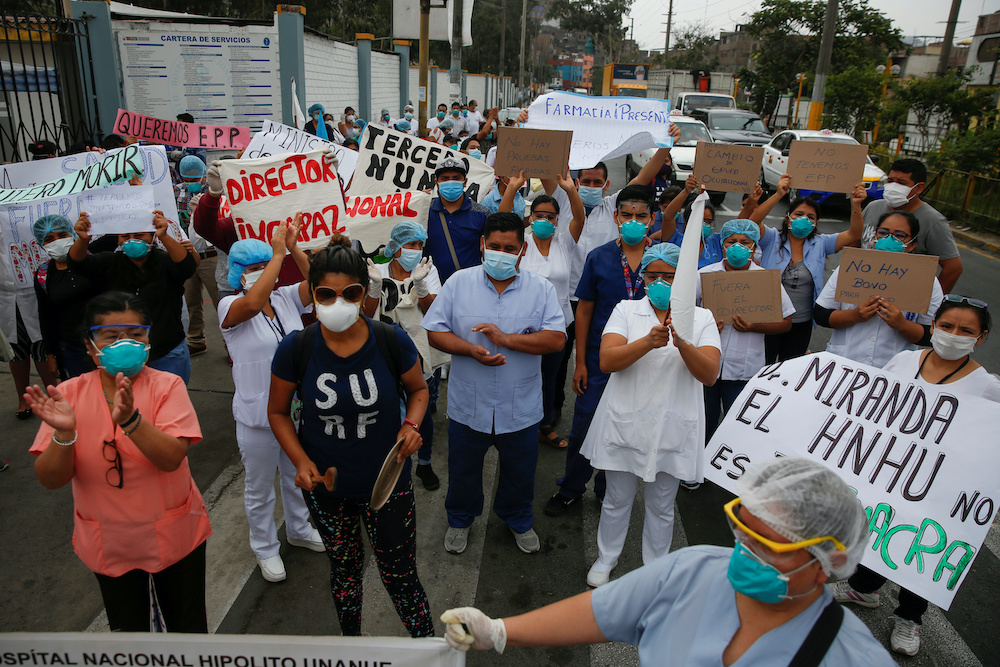