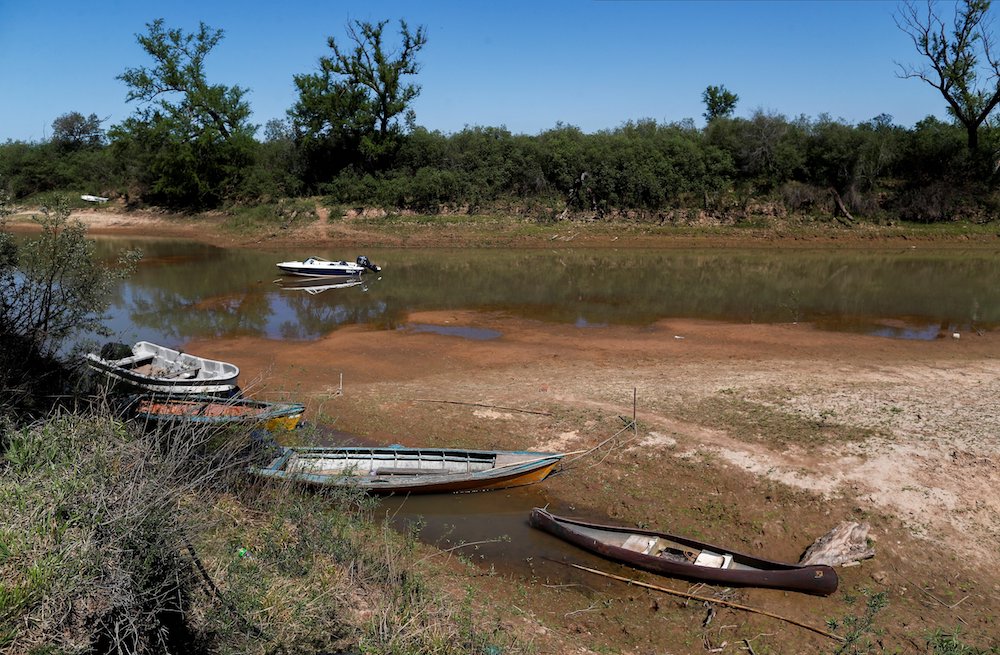 Stranded boats are seen on the waters of a dried branch of the Paraná River at the delta islands near Rosario, Argentina, in September. The lack of water in the Paraná is forcing fishing communities to move, while deforestation in the Amazon is disrupting lives and livelihoods of Indigenous communities across eight countries. (CNS photo/Agustin Marcarian, Reuters)

The Paraná River, which courses through Argentina, Brazil and Uruguay, is running dry. The Amazon, the world's largest tropical forest, is losing tree cover at an accelerated pace. And glaciers in the Andes, from Ecuador to the tip of Chile, are melting.

The lack of water in the Paraná is forcing fishing communities to move, while deforestation in the Amazon is disrupting lives and livelihoods of Indigenous communities across eight countries. The loss of glaciers threatens the water and power supply for tens of millions of urban residents.

These and many other events caused by climate change are rapidly modifying the environment across Latin America and the Caribbean, creating new challenges for the region's 660 million people.

Environmental issues will have a central role when Catholic leaders gather Nov. 21-28 in Mexico City for the Sixth Ecclesial Assembly of Latin America and the Caribbean. The assembly will come on the heels of the U.N. Climate Change Conference in Glasgow, Scotland, and focus more attention on trends under way since Pope Francis released his encyclical "Laudato Si', on Care for Our Common Home" in 2015.

"The assembly will build on what the church put forward leading up to Glasgow. The church has expressed its concern and must be present, accompanying people," said Bishop Alfredo Vizcarra of Jaén, Peru. 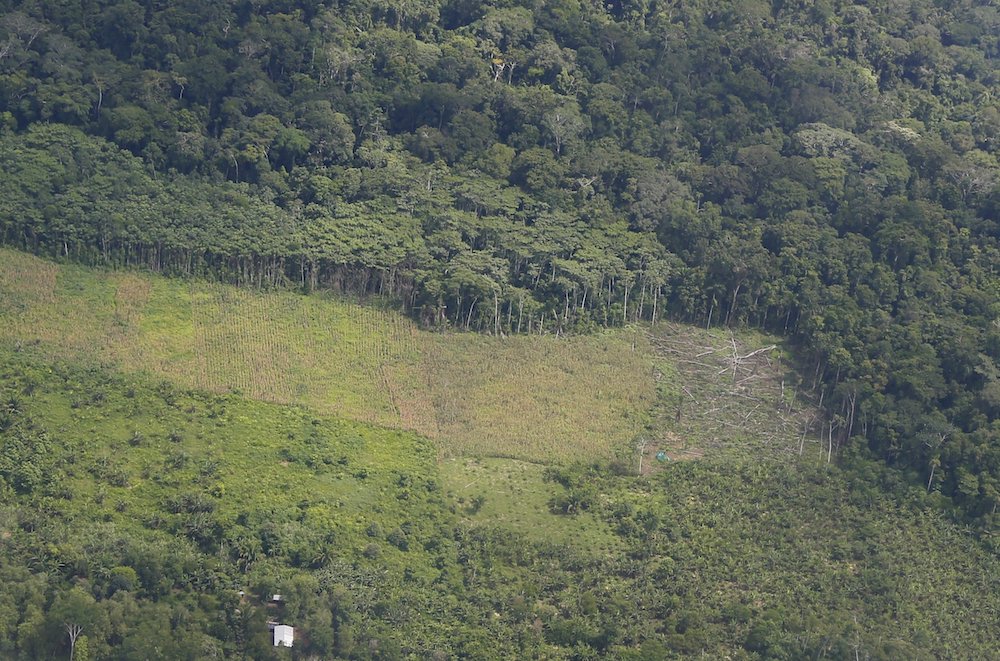 A deforested area is seen in this aerial view of Puerto Maldonado, Peru. Environmental issues will have a central role when Catholic leaders gather Nov. 21-28, 2021 in Mexico City for the Sixth Ecclesial Assembly of Latin America and the Caribbean. (CNS photo/Paul Haring)

Vizcarra, a Jesuit who is also head of the church-run Amazonian Center for Anthropology and Practical Application, said the church needs to advocate for "policies that are environmentally and interculturally sound and focus on guaranteeing basic conditions for human development."

The upcoming assembly of countries that form the Latin American bishops' council, or CELAM, has used a "listening process" to gather opinions on critical issues facing the church and the region. It is modeled on a process that was used in preparation for the Synod of Bishops for the Amazon in 2019, which included bishops and lay representatives from Bolivia, Brazil, Colombia, Ecuador, French Guiana, Guyana, Peru, Suriname and Venezuela.

The preparatory documents for the assembly in Mexico said the listening process was "the basis of our discernment, and will enlighten us to guide the future."

Vizcarra said the listening process was essential to the 2019 synod and the upcoming meeting in Mexico. He said it is also the cornerstone of the upcoming synod on synodality. The process lets the church clearly see what is happening around it.

In his part of the Amazon basin, this means environmental degradation from extractive industries, including illegal mining and illegal logging, as well forests being cleared for crops, including coca, from which cocaine is made. 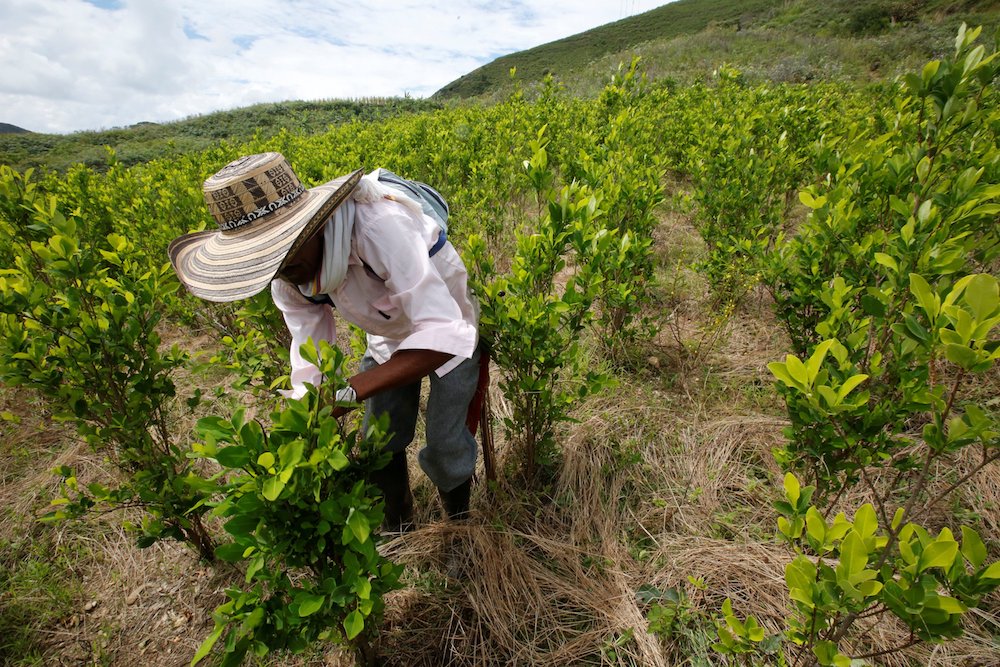 A farmer harvests a coca crop in Cauca, Colombia. Forests in Colombia, Peru and Bolivia are often are cleared for growing crops, including coca, from which cocaine is made. (CNS photo/Jaime Saldarriaga, Reuters)

Peru lost a record 502,296 acres of tropical forest in 2020, but it was not alone. Deforestation in Colombia was 424,243 acres, and in Brazil it reached 2.7 million acres — an area larger than Delaware and Rhode Island combined and the highest loss in more than a decade.

Approximately 22% of the Amazon has been deforested or degraded, according to the Amazon Geo-Referenced Socio-Environmental Information Network, or RAISG, a consortium of organizations in the Amazonian countries.

Deacon Alirio Cáceres Aguirre, an eco-theologian in Colombia, said the common threat throughout the Americas is a conflict over territory.

"Territory is seen as a resource, which makes it the root of conflicts. Territorial conflicts are what concern communities, and they have to be central on the church's agenda," he said.

Cáceres said the assembly in Mexico is part of a "tapestry" that has been evolving under Francis and has to do with territory and synodality. The experience that began in the Amazon, he added, is reshaping the church.

"The Amazon synod was a pilot experience that was successful, and the church is now using it as a model for all the 'Amazons' of the world," he said.

The church has been responding in different ways, including the formation of ecclesial environmental associations that are part of the Ecclesial Network Alliance for Integral Ecology. The groundbreaking effort in the region was the Pan-Amazonian Church Network, known as REPAM, and others have been formed in Mesoamerica, the Congo Basin, Asia and Oceania and the Gran Chaco region of Paraguay and Argentina.

Three other pieces are also shaping the process, including the Laudato Si' Action Platform, Economy of Francesco movement and Global Compact for Education. Cáceres said the different pieces "are acting in concert to create an ecological citizenry." 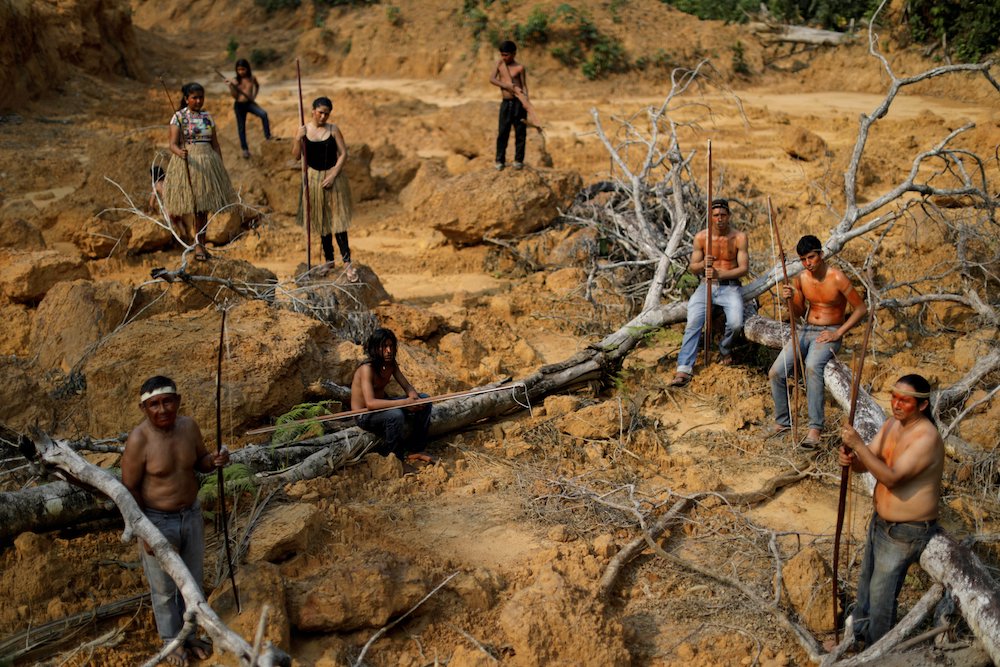 The Vatican describes the Laudato Si' Action Platform as a response to the call "for healing our relationships with God, our neighbors, and the earth itself," while the Economy of Francesco is "a different economy, one that helps people live and does not kill, that includes and does not exclude, that humanizes rather than dehumanizes, that takes care of creation and does not plunder it."

Vizcarra said the assembly in Mexico needs to stress the impact environmental degradation is having across the region, especially on Indigenous and other vulnerable communities, and the need for change now.

"We have the responsibility to care for our common home and the future of life on Earth. We need to change our paradigm and the system that is putting our existence at risk," he said.