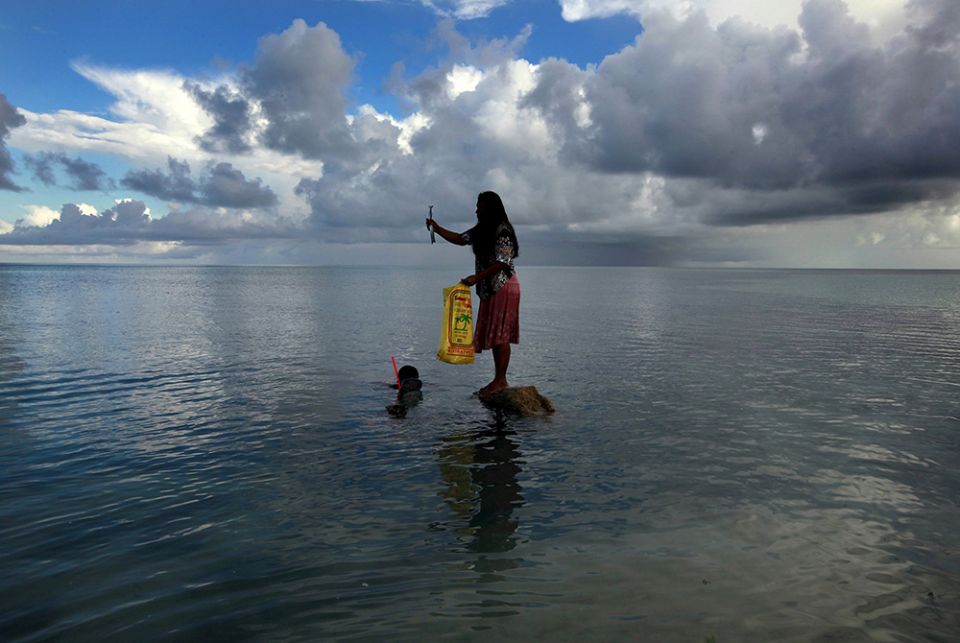 In this May 25, 2013, file photo, a woman holds a fish caught by her husband off South Tarawa in the central Pacific island nation of Kiribati. (CNS/David Gray, Reuters)

The countries of Asia and the Pacific cover a vast and varied area, from Australia, with its desert interior, to the rainforests of Indonesia and the Philippines, to tiny island nations like Vanuatu. What ties them together, says Jesuit Fr. Pedro Walpole, are the moisture-bearing winds — a "river above" — that bring monsoon rains and sometimes fierce typhoons.

"A third of the world is the Pacific Ocean," Walpole, who lives on Mindanao, in the Philippines, told EarthBeat. "If Asia wants a sustainable biome, it must pay attention to the Pacific Ocean. All of our weather is determined by the temperatures in the Pacific."

The rain that feeds the rivers and gives life to the region's tropical forests depends on those weather patterns.

"All of it is kept alive by this river above," Walpole said. "It's beautiful. It's so integral. If you want a picture of how to live, it's all there in this river above. That's what gives life to the whole of Asia."

Now a new church network is calling attention to the relationship of the region's people with the ocean, forests and rivers, and the climate on which they all depend.

The River Above Asia and Oceania Ecclesial Network launched officially in late November. It seeks to foster dialogue among the church, Indigenous and traditional communities, and youth and other faith groups, said Walpole, who is coordinator of the network.

The new network joins similar efforts in the Amazon basin, Mesoamerica and Africa. The best-known group is the Pan-Amazonian Ecclesial Network, or REPAM, which played a leading role in preparation for the Synod of Bishops for the Amazon, held at the Vatican in October 2019.

But the network in Asia and Oceania covers a geographic area — at more than 20 million square miles, and accounting for one-third of Earth's surface land — far larger than any of the others. The region includes two federations of bishops' conferences, as well as grassroots environmental networks like the Pacific Climate Warriors, which won Pax Christi International's annual peace prize in December. 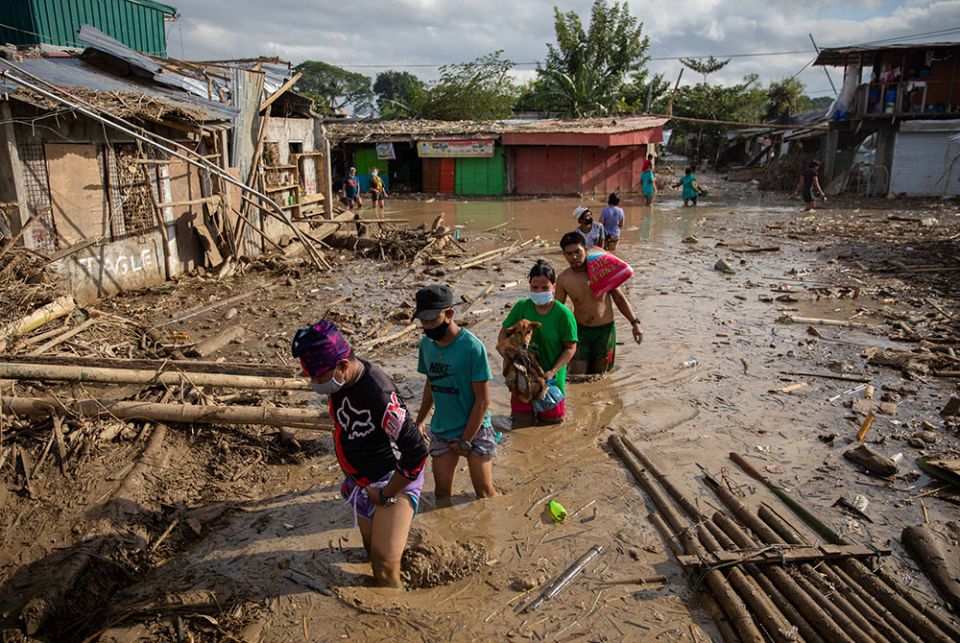 Residents walk through mud in Manila, Philippines, Nov. 14, 2020, after flooding caused by Typhoon Vamco. Five tropical storms or typhoons hit the Philippines in a three-week period, including the strongest typhoon since 2013 and the biggest floods since 2009. (CNS/Eloisa Lopez, Reuters)

The increasing threat of climate change looms over the region. Small island nations are already feeling the effects of rising sea levels, and punishing typhoons are striking with increasing frequency and force.

Indigenous and traditional communities also suffer the consequences of extractive activities like gravel and stone quarrying, black sand mining on seashores, dredging of coral reefs, mining and razing of forests for palm plantations, said Archbishop Peter Loy Chong of Fiji, president of the Federation of Catholic Bishops' Conferences of Oceania, during the virtual launch of the new network on Nov. 24.

Those activities have "a double destructive force, on the ecology and the social environment," by displacing or sowing discord among local communities, Chong said. "It damages the environment, but also damages the connectivity of family, tribe, clan that has been formed over many years."

Those who object face threats or risk assassination. Attacks on environmental defenders in the Philippines have been increasing since 2018, and 43 were murdered in 2019, according to the non-profit watchdog group Global Witness. 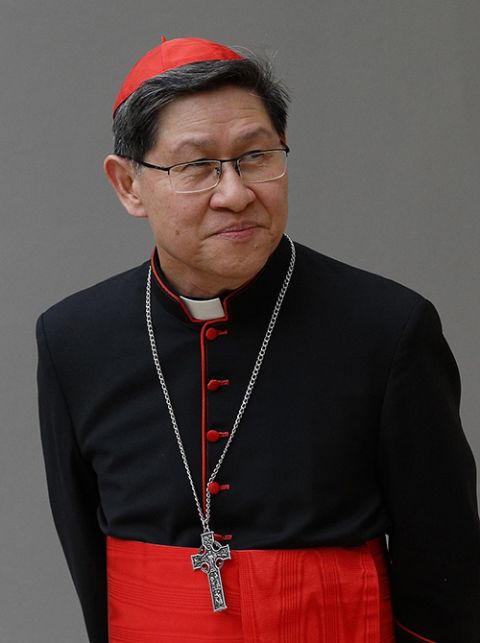 Cardinal Luis Antonio Tagle, prefect of the Congregation for the Evangelization of Peoples, is pictured in a 2018 file photo. (CNS/Paul Haring)

Cardinal Luis Antonio Tagle of the Philippines, who heads the Vatican's Congregation for the Evangelization of Peoples, called the new network "a sign of solidarity."

"Asia and Oceania have had a lot of experiences related to natural disasters, made worse by human political economic systems that do not only destroy the common home, but imperil the lives, especially, of the poor," he said during the launch event.

"Maybe we could gather such experiences to be shared with the rest of the church," Tagle added, noting that there is greater global awareness of people who have been displaced by conflict than by weather- and climate-related disasters.

The region's bishops have thrown their support behind the network, attending virtual meetings across multiple time zones during the planning process, Walpole said.

"What's amazed me is the number of bishops that will meet at any hour of the day and night," he said. "I've been very humbled by the process, because I didn't think I'd hear from many bishops. But they've shown they're committed."

At first, he said, the network's main task will be to learn about the lives and dreams of the region's residents, especially traditional and Indigenous people.

"This for me is a listening process. I've learned to listen to the trees for most of my life, so now I have to listen to people. I'm not in a hurry. I want to hear people's stories," said Walpole, a native of Ireland who was trained as a forest hydrologist.

Walpole spoke with EarthBeat from a room in his open-sided wooden house, which overlooks an expanse of forest. Behind him was a blackboard, with a machete hanging on one side and a large bunch of bananas on the other. Youths carrying farm tools occasionally passed by in the background.

The house is on land that was degraded by farming, where Walpole runs a cultural and environmental education center called Apu Palamguwan, which means "the one who dreamed." In working to restore the land, local youths deepen their understanding of their traditional culture and their relationship with the earth as they practice sustainable farming methods.

The center's name reflects the importance of dreams for Indigenous people. "Not a rational analysis, but a dream," Walpole said. "That's where everything gets integrated."

Pope Francis also opened Querida Amazonia, the papal exhortation that followed the 2019 Synod for the Amazon, by describing his dream of a region that fights for the poor and original peoples and preserves its cultural and natural riches, and where Christian communities give the church an Amazonian face.

Although the River Above Network grew out of discussions that predated the Amazon synod, Walpole said the event helped serve as a catalyst, and Querida Amazonia called the church to listen.

While the church networks around the world may lead to other synods, the Jesuit priest believes they will be more participatory "and much more listening, experiential, because it's through people who live on the land and on the ocean that we also hear the story of creation again and again."