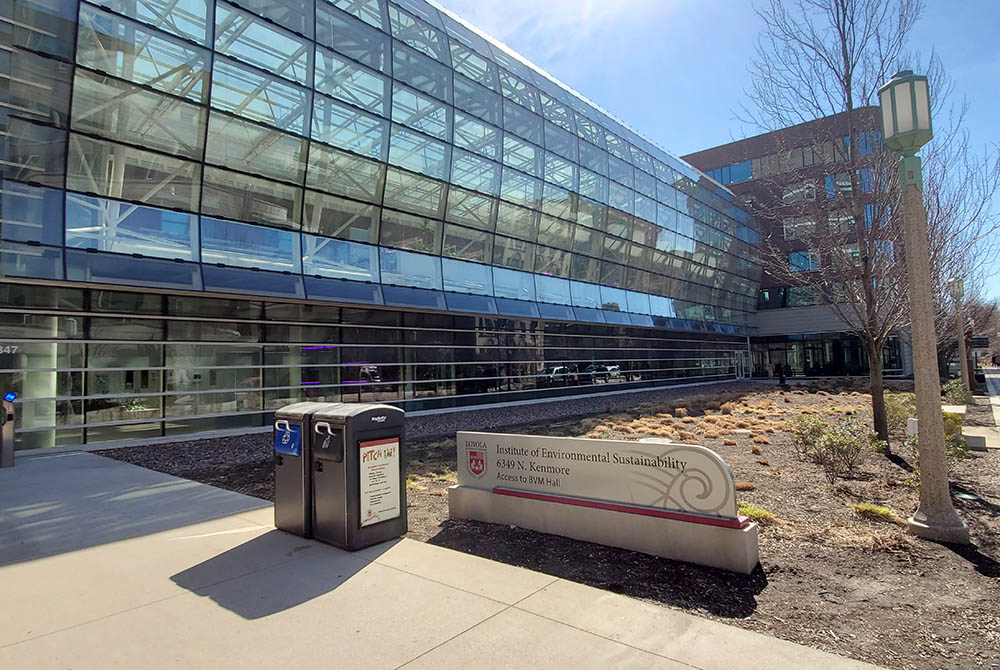 Until September, the School of Environmental Sustainability at Loyola University Chicago was known by another name. That month, the board approved a plan to elevate it from an institute into a full academic school, the first of its kind within the global Jesuit university network. (NCR photo/Brian Roewe)

Loyola University Chicago boosted its commitment to addressing environmental and climate change issues with the unveiling Dec. 14 of its new School of Environmental Sustainability.

The school, Loyola's 11th, upgrades the status of its seven-year-old Institute for Environmental Sustainability, which already was one of only a handful of such programs at U.S. Catholic colleges. It is the first environmental sustainability school in the global Jesuit academic network.

In remarks at the virtual grand opening, Loyola Chicago president Jo Ann Rooney said the School of Environmental Sustainability "reflects the centrality of caring for our planet to our Jesuit mission." She added that it "reflects the urgency of our deepened commitment to address climate change in all of its aspects: scientific, economic, social and cultural."

Nancy Tuchman, founding dean of the institute-now-school, called the launch "a milestone accomplishment in the university's 16-year sustainability initiative."

Although the institute has always had its own faculty and granted degrees, Tuchman told EarthBeat before the event that the change in status raises its stature within the university, which is marking its 150th anniversary. The school plans to add new research labs and double its faculty and staff. It also has set a goal of tripling its undergraduate and graduate enrollment.

The school has played a leading role in Loyola's own sustainability plans, continuing efforts headed by the institute, including progress toward the university's goal of eliminating its carbon dioxide emissions — which have been halved since 2008 — by 2025.

Its two teaching labs and other programs have transformed the university in other ways — running a local farmers market, hosting an annual climate conference, converting food waste into fuel for its shuttlebuses and even producing hand sanitizer during the coronavirus pandemic. 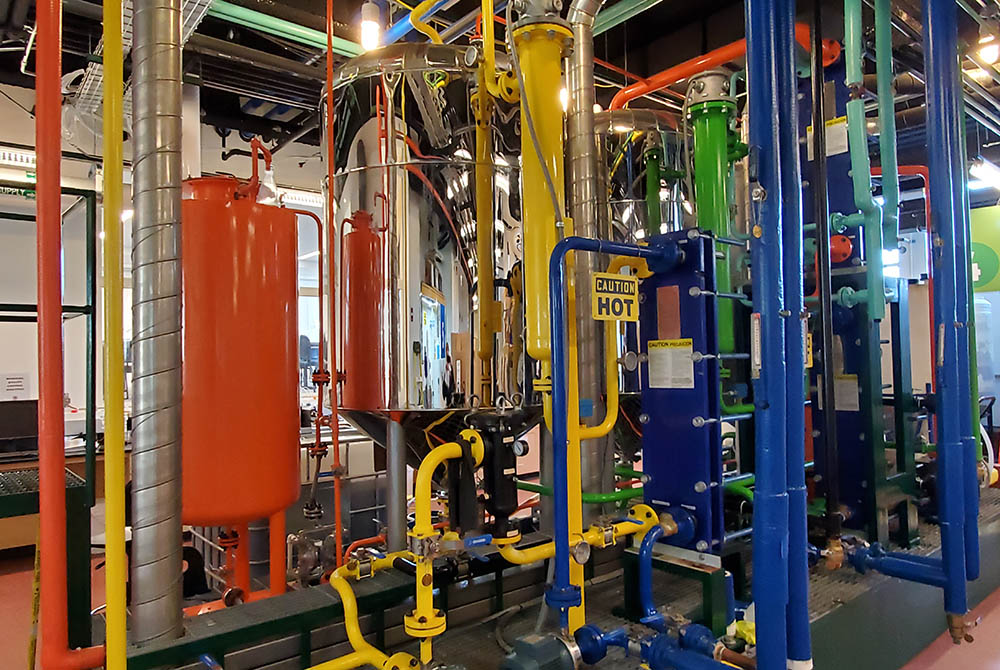 The opening event featured a panel discussion that included Bill McKibben, environmental writer and co-founder of the grassroots activist organization 350.org, and Kimberly Wasserman, a Chicago-area environmental activist who received the 2013 Goldman Prize after leading a successful campaign to shut down two coal-fired power plants on the city's South Side.

Salesian Fr. Joshtrom Kureethadam delivered a message and prayer on behalf of the Vatican's Dicastery for Promoting Integral Human Development. He called Loyola Chicago "leaders in the area of environmental care" and said he hoped the school would take it "to greater heights."

Tuchman said the decision, approved unanimously by the board of trustees in September, reflects the urgency of addressing problems like climate change and environmental degradation. Such concerns, she added, are central to the mission of the Society of Jesus — which last year made protecting creation one of its four apostolic priorities — and were articulated by Pope Francis in his 2015 encyclical "Laudato Si', on Care for Our Common Home."

"The pope has really made a beautiful road map for the work of Catholic colleges, universities, schools — all Catholic organizations if they care to take it up — and we certainly are highly motivated to take up the pope's road map to an integral ecology," she said.

Loyola's green reputation is a draw for students. A survey of incoming freshmen found that 52% cited the school's environmental commitment as important or very important in their enrollment decision.

"We know that people know about our green campus and our commitment to environment before they even get onto campus. And that's an important reason why they even apply here and want to be a part of this," Tuchman told EarthBeat in a March interview.

Loyola Chicago ranked 27th in the Sierra Club's 2020 Cool Schools list of environmentally sustainable colleges. It has also earned a gold rating from the Association for the Advancement of Sustainability in Higher Education, and was named a Green Ribbon School in 2019 by the U.S. Department of Education.

Under Tuchman's leadership, the Institute of Environmental Sustainability established six undergraduate degree programs and two graduate tracks. The new school will continue the institute's leading role in modeling the principles it teaches, especially in the greening of campus infrastructure.

Eight of the buildings on Loyola's three campuses have green roofs, and the School of Environmental Sustainability is housed in one of seven LEED-certified buildings on campus, meeting standards for energy efficiency and environmental design set by the U.S. Green Building Council.

Those efforts have helped slash the campus carbon footprint by more than half since 2008, and the university has committed to achieving LEED certification with all new construction, as well as with renovations, where possible. 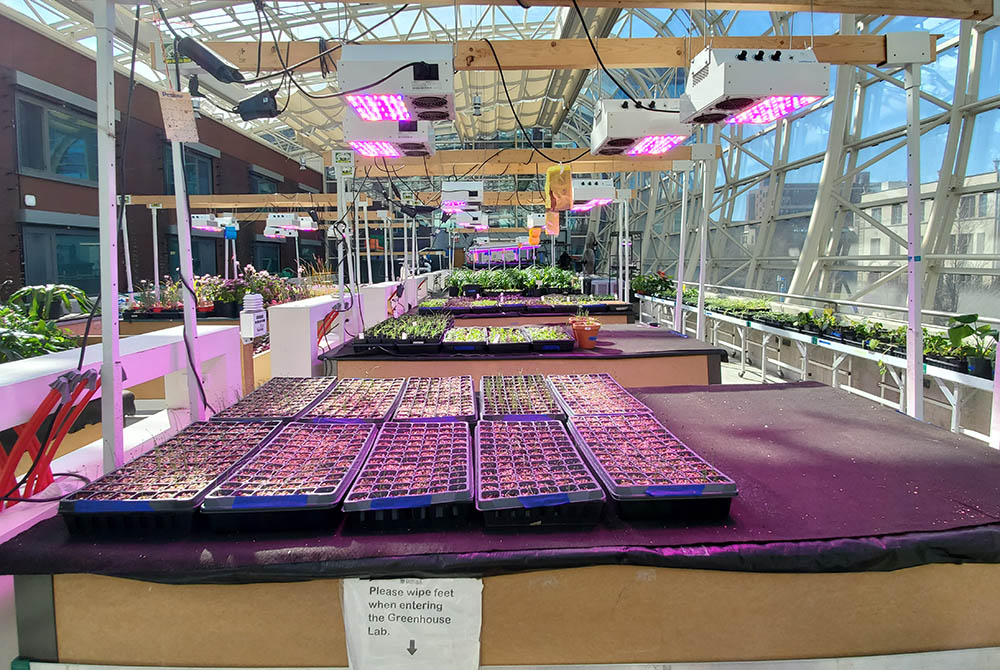 The new school's 3,100-foot "ecodome" greenhouse serves as a learning environment for students, while its sloped roof collects rainwater for reuse, after ultraviolet disinfection, in the greenhouse and for flushing toilets.

The School of Environmental Sustainability and adjacent San Francisco residence hall are also heated and cooled by the Chicago region's largest geothermal energy system, which circulates water through pipes from 91 wells — each 500 feet underground, where temperatures remain around 57 degrees Fahrenheit year-round.

The water draws heat from the surrounding soil in the winter to warm the buildings, while the soil cools the water in the summer.

"So the earth is acting almost like a battery where it holds that heat energy for us. And we need it in the winter, but we pack it back in, we recharge it again all summer long," Tuchman said.

Glass panels on the ground level allow students and visitors to see the geothermal system in action, as digital thermometers trace the temperature of the water during its journey. 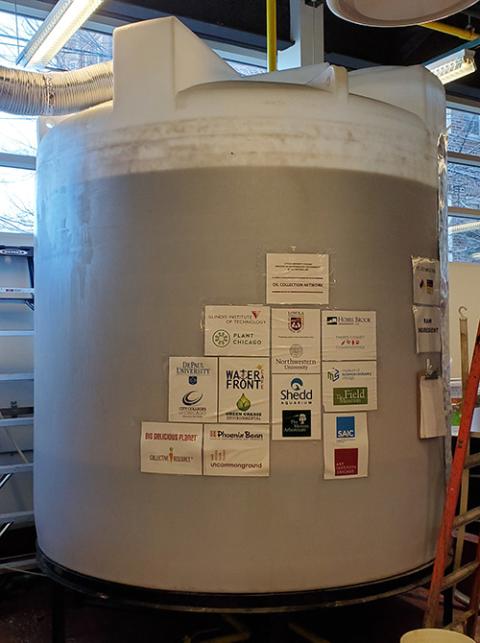 Along with its own cafeterias, the biodiesel lab at Loyola University Chicago collects waste vegetable oil from other institutions around Chicago, such as the Field Museum and Shedd Aquarium. (NCR photo/Brian Roewe)

The system was a good fit for Chicago's climate and more feasible than solar panels on an urban campus with limited space. It is projected to cut heating and cooling costs by 30%, and to pay off startup costs within the next six years, about four years earlier than initially expected.

The school's research reflects its efforts to model sustainability by reducing the amount of inputs — such as food, water, paper and other materials — entering the campus, while decreasing outputs like emissions, trash and wastewater.

In the biodiesel lab, students collect 100,000 gallons of used vegetable oil each year from cafeterias on campus and at other institutions and turn it into fuel, which they sell to the bus company that shuttles students between campuses. Loyola is the only university in the U.S. licensed to sell its recycled biodiesel. Glycerin, a byproduct from that process, is used to make soap for dispensers in campus bathrooms.

After the COVID-19 outbreak in the U.S. shut down the campus, the lab's manager, Zach Waickman, pivoted to creating hand sanitizer to stock its three main campuses.

"It's using and reusing. So we don't bring soap in, we don't bring fossil fuel-based diesel, but instead we're using waste products to run the campus," Tuchman said.

And the lessons are resonating.

When students overseeing the school's aquaponics system found that plant leaves were yellowing because of a lack of iron in the water, they elected to try dropping discarded iron bolts from the facilities department into the water instead of ordering iron from a chemical supply house. Sure enough, the iron levels rose and the leaves turned green again. 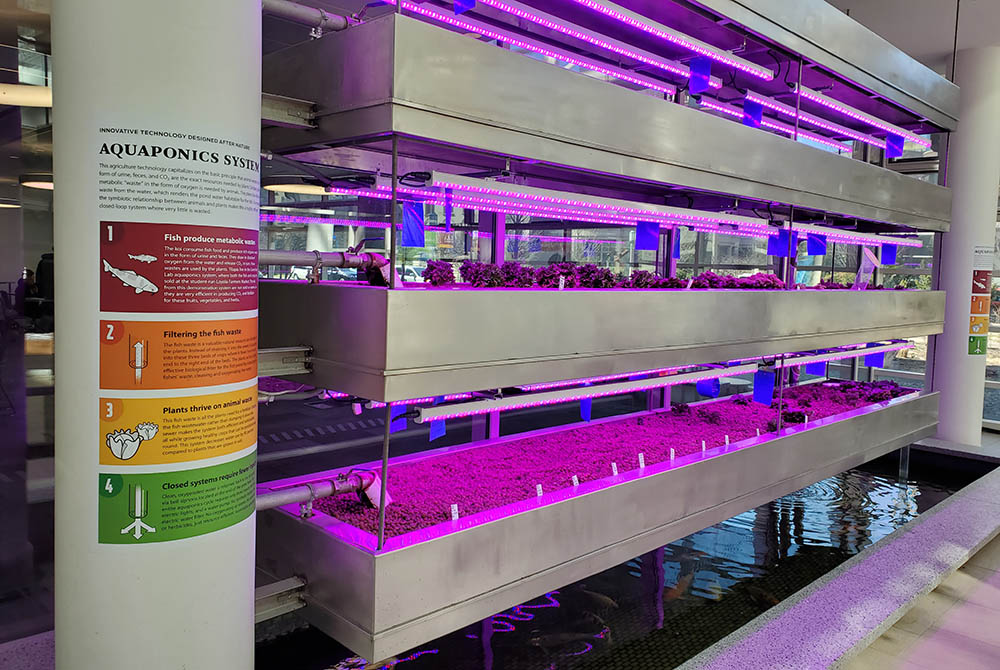 The School of Environmental Sustainability will also continue the institute's commitment to the sustainability principles of reduce, reuse and recycle.

Students have worked with vendors at athletic events to achieve zero landfill waste with steps like eliminating single bags of chips. The school competes in a national "zero waste" competition for colleges and holds its own "WasteWeek." When students leave for the summer, the school collects used clothing and unopened food and toiletries for donation to local charities and schools. It also tracks and analyzes Chicago's air and water quality.

Plans for the future include new research labs focusing on biodiversity, ecological restoration and environmental health, as well as greater interdisciplinary collaboration. There are already dual degree programs with the Parkinson School of Health Sciences and Public Health and the Quinlan School of Business, including a sustainable business MBA.

The new school is also working with the Vatican's Dicastery for Promoting Integral Human Development to develop evaluation criteria for schools taking part in its Laudato Si' Action Platform, which encourages Catholic institutions to make seven-year plans to achieve "total sustainability" by meeting a set of benchmarks across seven goals inspired by the encyclical.

Since 2015, the school has hosted an annual climate change conference, with keynote speakers including former EPA administrator Gina McCarthy, former Irish President Mary Robinson and author and activist Naomi Klein. Its 2020 conference, focusing on youth climate activists, was postponed because of the coronavirus pandemic and instead will take place virtually in March.

Despite tighter budgets because of COVID-19, the pandemic has not derailed the university's sustainability commitment, Tuchman said.

"It's a significant investment. And to me that means a lot," she said of the new school. "Especially during COVID-19, the university is still willing to and excited about investing in a future where we can meet the big challenges of the environment much more robustly."