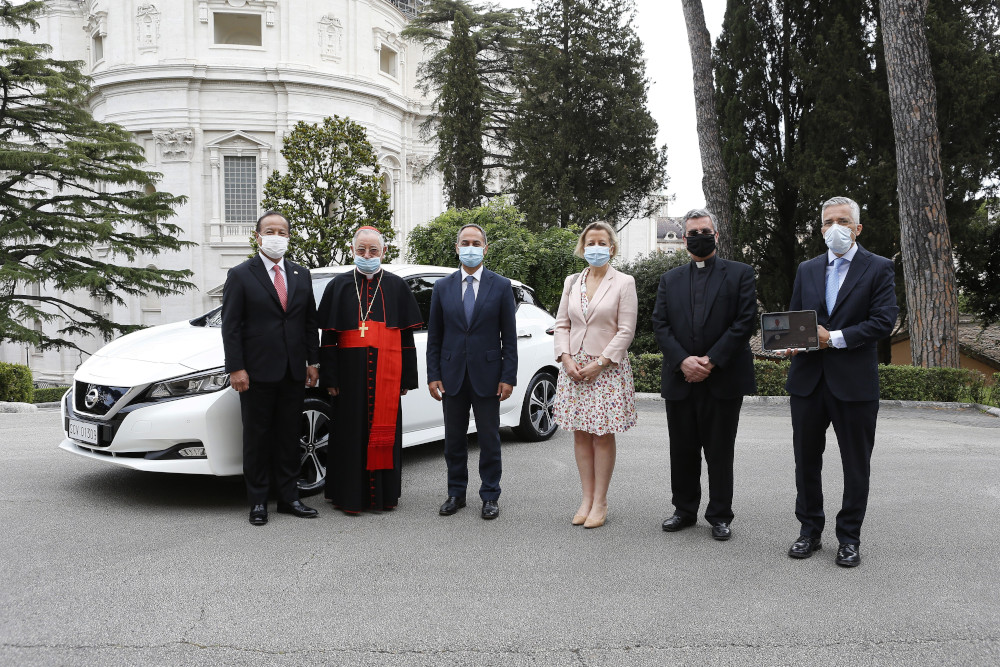 A Nissan Leaf electric car is seen during a ceremony for its presentation as a gift from Nissan to the Vatican June 5, 2021. Pictured from left are: Seiji Okada, Japanese ambassador to the Holy See; Cardinal Giuseppe Bertello, president of the commission governing Vatican City State; Marco Toro, president and CEO of Nissan Italy; Sally Axworthy, British ambassador to the Holy See; Fr. Rafael García de la Serrana Villalobos, director of infrastructure and services for Vatican City State; and Paolo Matteucci, director of electric vehicles for Nissan Italy. (CNS/courtesy Nissan Italy)

As Pope Francis continues to urge the world to turn over a new leaf in its response to climate change, he now has the ideal car to drive that message home.

Japanese automaker Nissan presented the Vatican with its all-electric Leaf sedan at a ceremony on June 5, World Environment Day.

The gift aimed to help the Vatican in its goal to gradually replace its fleet of service vehicles with electric alternatives. It has also pledged to increase the number of electric charging stations, including around several of the major basilicas in Rome.

By transitioning to electric vehicles, the Vatican is "setting an example for all other countries in the world" in responding to climate change, Okada said.

"Global decarbonization cannot be achieved through the efforts of one country alone, it is a challenge that requires the whole international community to act in one," the ambassador said.

Japan and the United Kingdom are among the nations that have set goals to reduce greenhouse gas emissions to net zero by midcentury. The U.K. has also pledged to end the sale of new gasoline-powered cars by 2030.

The car given to the Vatican was produced in Sunderland in northeastern England, home to the largest automotive plant in the U.K. and part of a region historically tied to coal mining, shipbuilding and steel production. In November, the U.K. will host the next United Nations climate summit, COP26, in Glasgow, Scotland.

The Vatican shift toward electric cars is part of the 110-acre city state's efforts to become carbon neutral by 2050, a goal Francis announced in December as part of the U.N. Climate Ambition Summit.

"There is an urgent need to develop policies so that, in the next few years, the emission of carbon dioxide and other highly polluting gases can be drastically reduced, for example, substituting for fossil fuels and developing sources of renewable energy," Francis wrote in his 2015 encyclical "Laudato Si', on Care for Our Common Home." 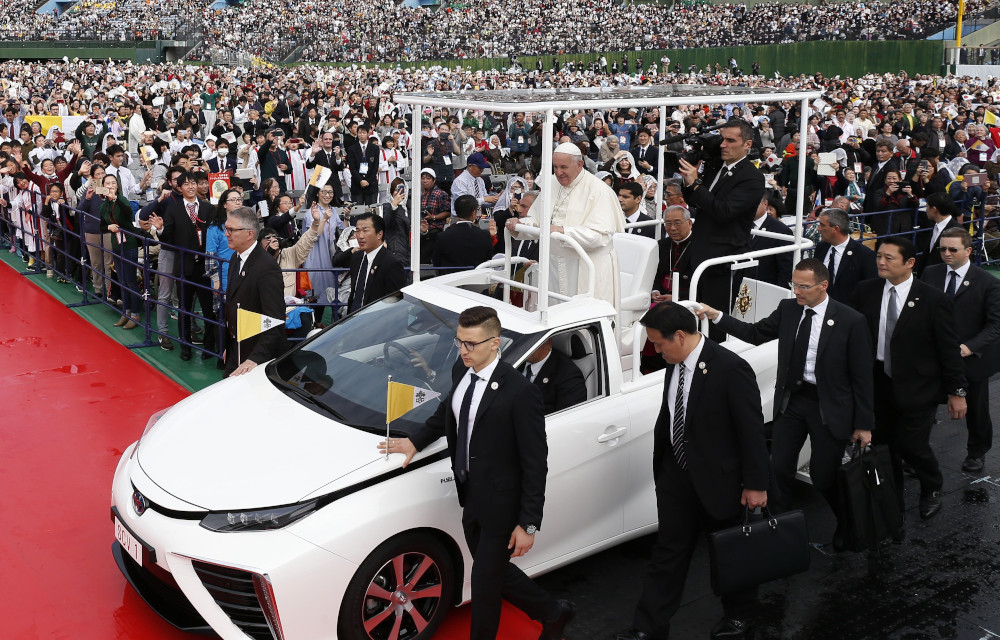 Pope Francis rides in a hydrogen-powered Toyota vehicle as he greets the crowd before celebrating Mass at the baseball stadium in Nagasaki, Japan, Nov. 24, 2019. (CNS/Paul Haring)

The Leaf is not the first electric car gifted to Vatican or Francis, who is known to travel through Rome in a Ford Focus. It's not even the first extended to the pope this year.

In May, California-based electric car startup Fisker met with Francis and provided renderings of an all-electric popemobile, based on the carmaker's Ocean sport utility vehicle, complete with a solar roof and carpets made of recycled plastic bottles. According to NBC News, Fisker expects to deliver the battery-powered popemobile sometime in 2022.

Francis received a hydrogen-powered popemobile from the Japanese bishops' conference in the fall. The Toyota-built vehicle, which emits only water vapor, was first used during the pope's trip to Japan in 2019. According to NBC News, the vehicle received little use in other travels because the fuel source is not always readily available.

For decades, most popemobiles have been produced by German auto giant Mercedes-Benz. The company at one point was developing its own energy-saving version for Pope Benedict XVI, who was responsible for installing solar panels on the roof of the Paul VI Audience Hall.

Francis has also received a Nissan Leaf before. In December 2016, Wermuth Asset Management, a German investment firm focused on sustainability, gave the pope a Leaf as a birthday present, along with a pledge to produce a series of sustainability studies for the Vatican.

Months later, the German-based car manufacturer, Opel, presented to Francis its all-electric Ampera-e model, another effort by an automaker to help the Vatican go carbon-free.