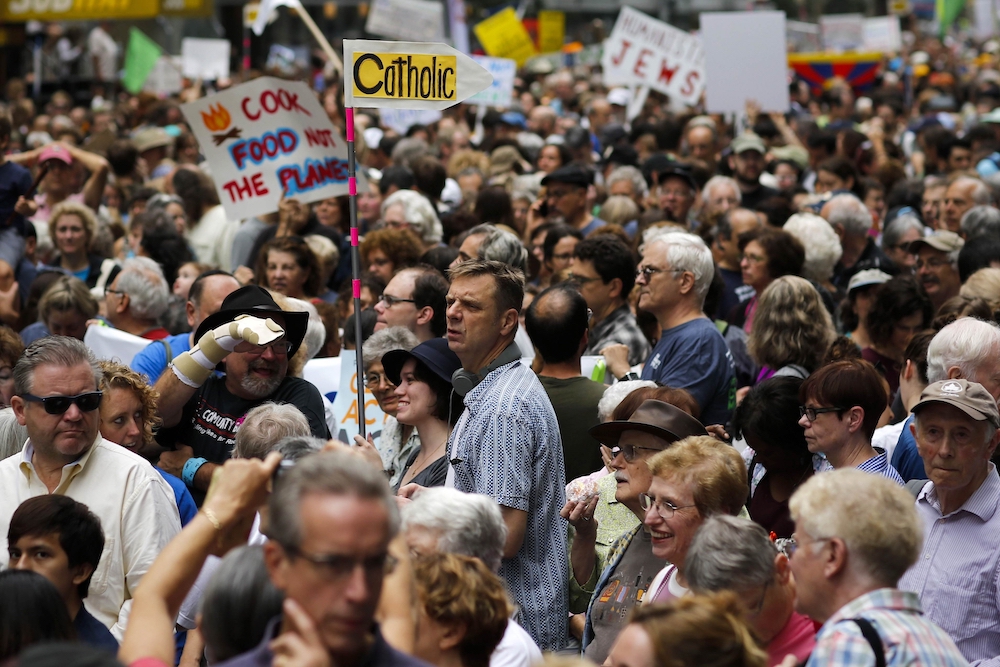 Catholics are among others attending a rally to urge global action on climate change in New York Sept. 21, 2014. (CNS/Reuters/Eduardo Munoz)

Pope Francis committed the Vatican to net-zero greenhouse gas emissions by 2050 during a virtual U.N. conference on Dec. 12, the fifth anniversary of the signing of the Paris Agreement on climate change.

In a brief recorded speech to the Climate Ambition Summit, Francis said the Vatican would meet that goal by "intensifying environmental management efforts that have been under way for some years, which make possible the rational use of natural resources such as water and energy, energy efficiency, sustainable transportation, reforestation and also the circular economy in waste management."

The pope also said the Holy See would commit to promoting education for integral ecology, a principle he developed extensively in the 2015 encyclical "Laudato Si', on Care for Our Common Home," which was issued in May 2015, ahead of the Paris climate summit.

Read all the articles about the fifth anniversary of Ladauto Si'

He noted steps the Vatican has already taken in that direction, including launching the Global Compact on Education for Catholic schools and universities serving more than 70 million students around the world. And in November, the Vatican sponsored the Economy of Francesco, a virtual conference that brought together young economists, finance experts and entrepreneurs to explore new economic models.

Vatican officials have started to reduce the city-state's ecological footprint, too. Under Pope Benedict XVI, solar panels were installed on the roof of the Paul VI hall, the main audience building. The Vatican also invested in a reforestation project to offset carbon emissions, but those trees were never planted. Officials are also replacing the Vatican's service vehicles with an electric fleet.

In separate comments a few days before the virtual summit, Cardinal Peter Turkson, prefect of the Vatican’s Dicastery for the Promotion of Integral Human Development, warned that stronger commitments were urgent, and Cardinal Pietro Parolin, Vatican secretary of state, said the world faces an “uphill” journey in implementing the Paris Agreement.This year's climate summit, the COP 26, was to have been a key moment for countries to present more ambitious commitments to reducing greenhouse gas emissions. That summit was postponed until 2021 because of the coronavirus pandemic, and the virtual event featured recorded messages in which heads of state presented their commitments.

In his remarks, Francis said the coronavirus pandemic and climate change are not only environmental problems, but are also ethical, social, economic and political issues that "affect, above all, the lives of those who are poorest and most fragile."

He called for a collective commitment to "a culture of care, which places human dignity and the common good at the center."

"The time has come to change course," the pope said. "Let's not rob the new generations of hope for a better future."

Editor's note: This story has been updated to indicate that the forest that was intended to offset Vatican emissions was never planted.