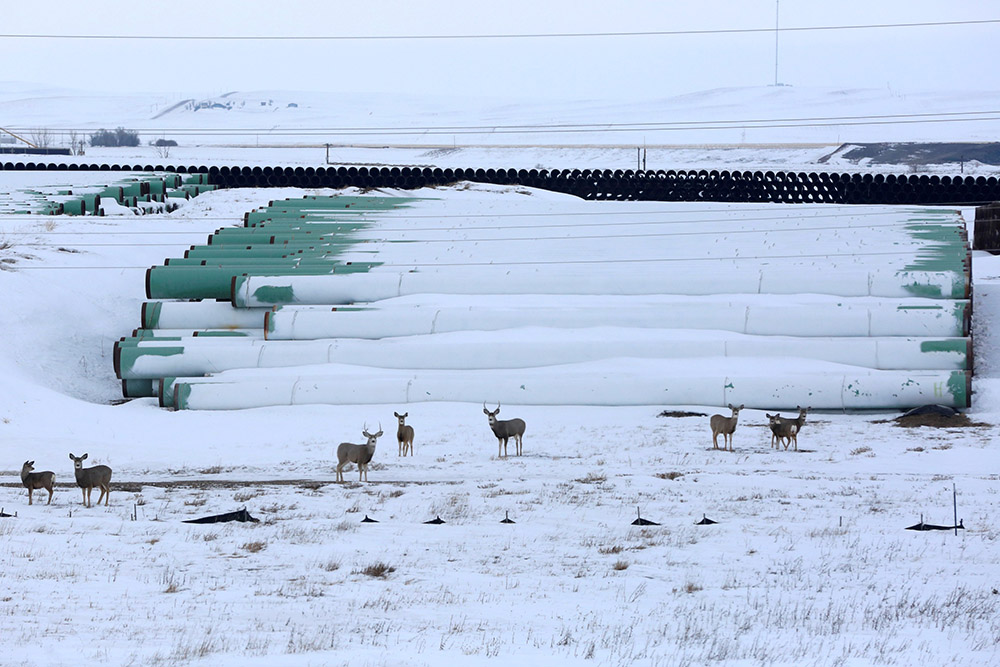 The U.S. Conference of Catholic Bishops is reviewing its socially responsible investment guidelines, a process that could result in the first update in nearly 20 years. The current document, which informs the investment decisions of many dioceses, colleges and church organizations, offers little direction about fossil fuel divestment.

The conference confirmed to EarthBeat in mid-May that the review is underway. Among those involved is the budget and finance committee, led by Bishop Gregory Parkes of St. Petersburg, Florida, bishops' conference treasurer. Before entering the priesthood, Parkes worked in the banking industry in Tampa and holds a degree in finance.

A source familiar with the conference's process said it remains in progress and no deadline has been set, but that updated guidelines, first issued in 1991 and updated in 2003, could be presented at the bishops' November assembly.

The review comes as the Vatican has issued its most direct guidance to Catholics on how to consider environmental matters in investments, including fossil fuel stocks.

In June 2020, an ecology working group of multiple Vatican dicasteries issued guidelines for Catholic institutions and individuals on implementation of Pope Francis' 2015 encyclical, "Laudato Si', on Care for Our Common Home."

A chapter dedicated to finance proposes 14 actions to consider. They include applying "ethical, responsible and integral criteria for investment decision making," specifically dissuading support for companies that harm people, such as those engaged in abortion or the arms trade, or that harm the environment, "for example through the use of fossil fuels."

The Laudato Si' guidelines also recommend that Catholics "speed up investments in sustainable infrastructures" and "promote responsible investments in social and environmental sectors, for example by evaluating progressive disinvestment from the fossil fuel sector." 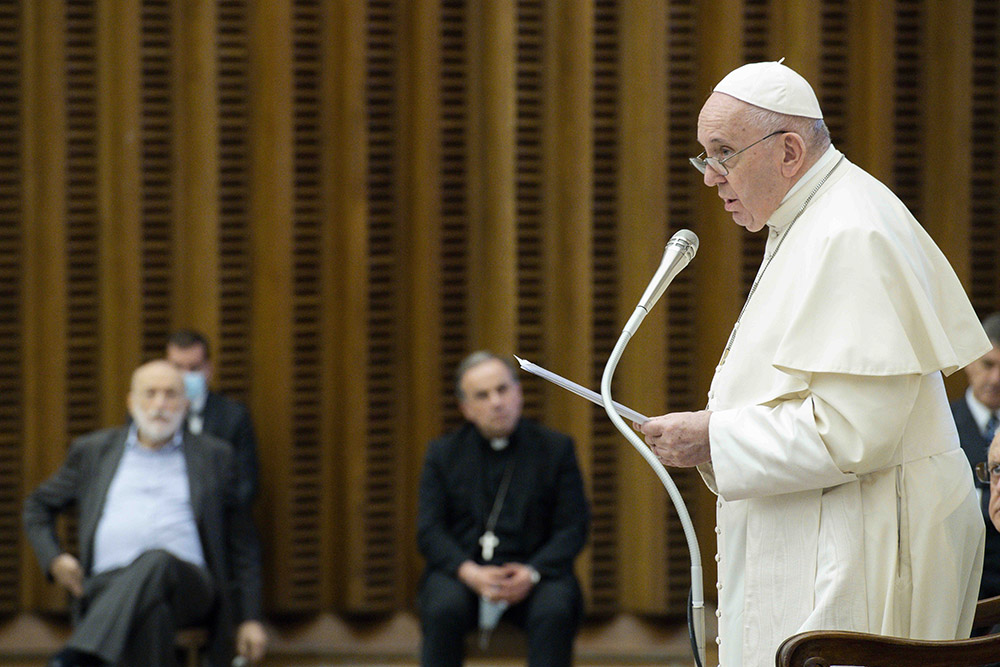 Pope Francis speaks during a Sept. 12, 2020, meeting with members of the Laudato Si' Communities in the Paul VI audience hall at the Vatican. (CNS/Vatican Media)

It is unclear to what degree the conference's investment guideline review is considering the Vatican's Laudato Si' implementation document or the final document of the October 2019 special Synod of Bishops for the Amazon, which called for supporting divestment from extractive industries.

Despite a growing movement in the Catholic Church to divest from fossil fuels, encouraged by clearer messages from the Vatican, the issue has been mostly on mute in the United States church, especially among hierarchy.

No U.S. diocese has publicly announced it has divested from fossil fuels, and, with a handful of exceptions, bishops have generally said little about the pope's ecological encyclical. In 2019, a pastoral statement on Laudato Si' from the California bishops hinted at a discussion of fossil fuel divestment, but so far no conversation has occurred.

In the U.S. church, most divestment action has involved religious orders, which represent the bulk of commitments, and universities. Along with the Marianist-run University of Dayton, three Jesuit schools have also divested: Creighton University, Seattle University and Georgetown University.

According to people engaged in church finances, Catholic groups have often used the U.S. bishops' socially responsible investment guidelines as a shield against discussion of fossil fuel divestment. In its current form, the document offers little guidance on environmentally related investments.

The document's fifth policy recommendation, its shortest, suggests that Catholic organizations "actively promote and support shareholder resolutions" to protect the planet's ecosystems and assist impoverished nations. They should also encourage businesses to "undertake reasonable and effective initiatives for energy conservation," including development of clean energy and incentivizing corporations to reduce greenhouse gas emissions.

Overall, the bishops' guidelines endorse shareholder engagement. They couch divestment in terms of companies whose products or policies run counter to Catholic values.

"The decision to divest, or to refuse to invest, would be based on the principle of cooperation and the avoidance of scandal," the document states, adding that divestment may not be required except in cases of "significant" investments, listing examples such as military weapons manufacturers or gambling.

Catholic officials following the process expressed skepticism that the bishops would advocate divestment from fossil fuels.

But if they did, "it would be a huge impact," said John O'Shaughnessy, chief financial officer for the St. Louis-based Franciscan Sisters of Mary, which divested in 2014, and founder of the Catholic Impact Investing Collaborative.

"If they follow what's come out with those guidelines from the Vatican, that's going to make an enormous difference. Because as I say, people are very comfortable saying we're following the guidance that the USCCB puts out," he said.

Bishops' conferences in other parts of the world have already opted to divest, and if the U.S. bishops follow suit, the impact could encourage others to do the same.

Erin Lothes, a theologian who studies energy ethics and who recently joined the Global Catholic Climate Movement, which has been campaigning for church institutions to divest, said energy decisions are ultimately ethical decisions because energy systems directly impact communities in the U.S. and around the world. At the synod for the Amazon, Indigenous participants spoke about the environmental, social and health impacts of oil drilling and hydroelectric dams on their communities.

"The connections may seem diffuse here, but there are moral links connecting what we invest in, what kind of energy systems run our society, and what impacts those energy systems have on our environment, our climate and people's health," Lothes said. 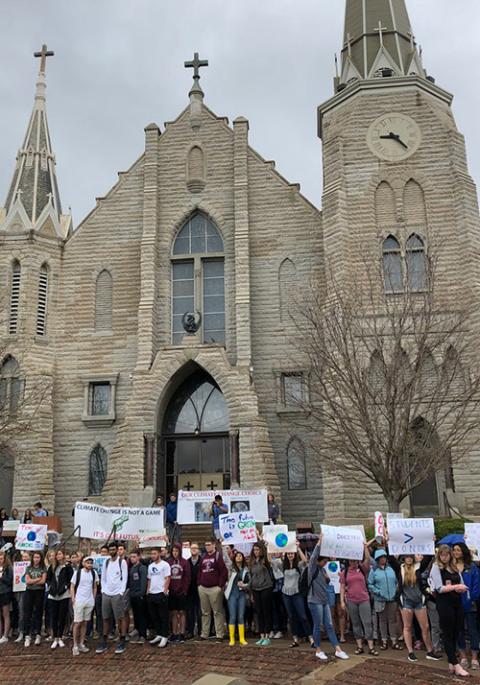 The lack of emphasis on Laudato Si' by the bishops and in parishes has led Catholic organizations in the U.S. to pay little attention to the relationship between their finances and fossil fuels, O'Shaughnessy said.

"It's a disregarded topic. And so there isn't much pressure on institutions to take a serious look at how they invest this way," he said.

That includes Catholic colleges, where there are student-led divestment campaigns on more than a dozen campuses. Many have coordinated through the Catholic Divestment Network, where students share resources, strategies, successes and setbacks.

Through the network, formed in the mid-2010s among students at Jesuit schools, students have also issued joint letters, said Kyle Rosenthal, a senior at Boston College and coordinator of Catholic Divestment Network.

Those missives " show we're not just Climate Justice at [Boston College], we're not just Fossil Free Creighton. We're students from around the country, around the world, calling for the same thing, and have the same expectations of Catholic universities," he said.

Though there have been few so far, the students consider any divestment a success. Rosenthal said he senses the most momentum at Marquette University, where students voted for divestment in a recent referendum, and Loyola University Chicago.

At Boston College, students are at a stalemate with administration officials, which led a group of alumni and area climate groups to ask the Massachusetts attorney general to investigate the school for violations of its fiduciary duties and Catholic mission. Filers of the novel petition met with members of the attorney general's office in early May.

Bill McKibben, co-founder of the grassroots climate group 350.org and its Go Fossil Free campaign, told EarthBeat that religious voices, including Francis', have been critical to providing a moral understanding of the push for fossil fuel divestment.

When faith groups state publicly their refusal to invest in coal, oil and natural gas, it is not just a symbolic act but one that diminishes the legitimacy of the industry, he added. In that sense, for religious groups, divestment is an even more practical step than putting solar panels on a sanctuary, McKibben said.

"The single biggest obstacle to progress on climate change remains the political power of the fossil fuel industry. And so anything that weakens that, that calls it into question, becomes just crucial," he said.

Read this next: Inside the campaign to divest the Catholic Church from fossil fuels
A version of this story appeared in the June 11-24, 2021 print issue under the headline: Review of US bishops' investment guidelines is underway.