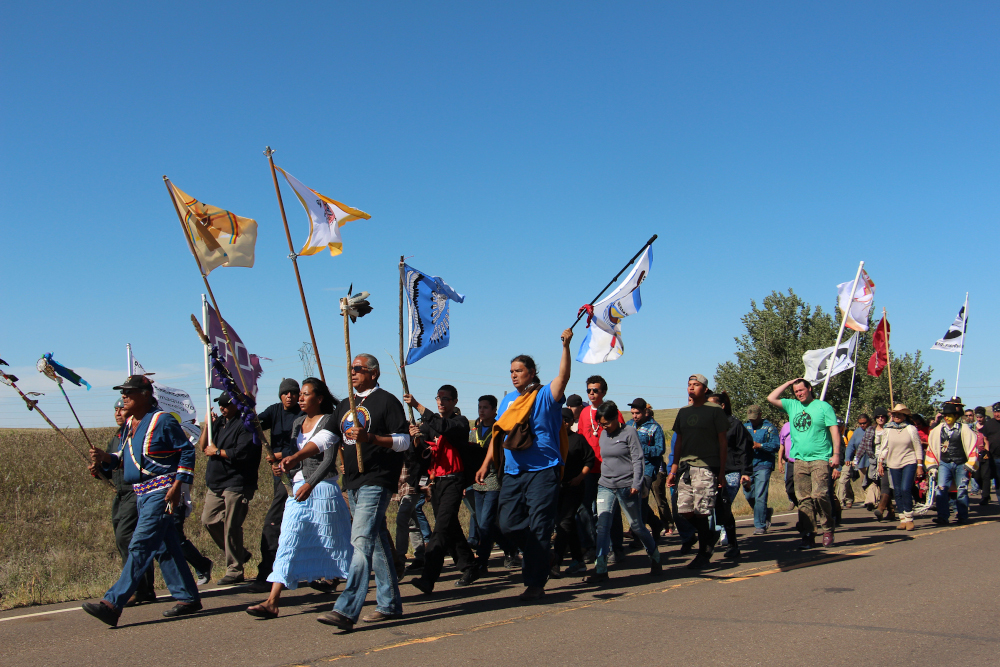 Several hundred people took part in a prayer walk on Sept. 14, 2016, from the Oceti Sakowin camp near Standing Rock Reservation in North Dakota to the site up the road where Dakota Access began digging over Labor Day weekend for construction on a nearly 1,200-mile pipeline project. Construction temporarily has been halted. (AP/RNS/Emily McFarlan Miller)

A federal judge has ordered a new environmental review for the Dakota Access Pipeline in what the Standing Rock Sioux Tribe is celebrating as a “significant legal win.”

In his ruling last week, Judge James E. Boasberg agreed with the Standing Rock Sioux that “too many questions remain unanswered” regarding the impact of the pipeline, which runs from North Dakota to Illinois.

Most notably, it runs beneath Lake Oahe near the Standing Rock Sioux Reservation in North Dakota, where, from 2016 to 2017, thousands of people gathered in prayer camps to stop its construction.

In a written statement released by Earthjustice, which is representing the Standing Rock Sioux Tribe, tribal chairman Mike Faith celebrated the ruling as an inspiration for climate advocacy.

“It’s humbling to see how actions we took four years ago to defend our ancestral homeland continue to inspire national conversations about how our choices ultimately affect this planet. Perhaps in the wake of this court ruling the federal government will begin to catch on, too, starting by actually listening to us when we voice our concerns,” Faith said.

The Standing Rock Sioux Tribe and other Native American nations with reservations in the area have not just objected to the pipeline for environmental reasons, but also for religious reasons.

“The Tribes now rely on the waters of Lake Oahe in myriad ways, including for drinking, agriculture, industry, and sacred religious and medicinal practices,” according to the ruling.

They have fought its construction not just in court, but also spiritually.

Along the way, they have gotten support from several Protestant Christian denominations, including the  United Methodist Church,  United Church of Christ,  Episcopal Church,  Presbyterian Church (U.S.A.)  and  Evangelical Lutheran Church in America.

Oil has been flowing through the Dakota Access Pipeline since 2017.

After President Donald Trump signed a memorandum expediting approval of the pipeline, the Army Corps of Engineers concluded an environmental impact statement wasn’t necessary to grant an easement for the Missouri River crossing at Lake Oahe.

The ruling does not affect the operation of the pipeline, according to Earthjustice, although Boasberg has asked for briefings on whether to shut it down in the meantime.