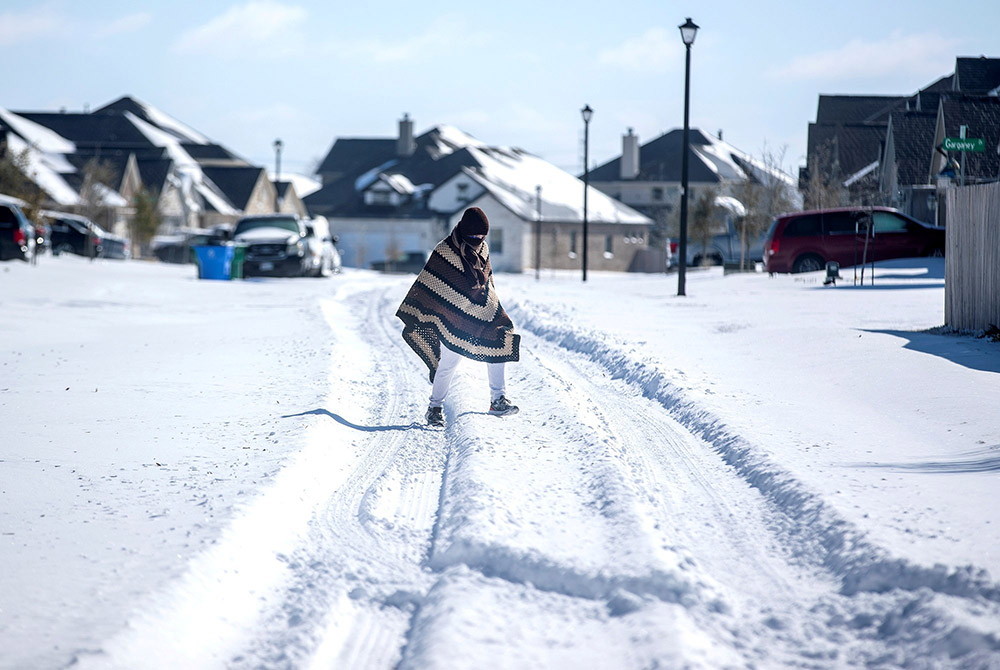 A man in Pflugerville, Texas, walks to his friend's house Feb. 15 in a neighborhood that had no electricity. (CNS/USA Today Network via Reuters/Austin American-Statesman/Bronte Wittpenn)

On Thursday morning, Bob Fleming put out a call to his network of faith-based organizations, asking how people in the Houston area were coping with the record-breaking winter storm that has gripped much of Texas this week.

"For those asking, it's four days later and I still don't have power. I've been looking for a hotel since day two. We got power for maybe 20 minutes yesterday and then it went back out. It's devastating for me and my two children," said one woman.

"Still no power, 84 hours and still counting. I am now without water. My husband and I are exhausted. Everybody stay safe and warm," replied another.

While state officials announced later in the day that power had stabilized and forced shutoffs were no longer needed, more than 300,000 households remained without power.

Since the winter storm and subfreezing temperatures set in Sunday, millions of people at some point were without power, water or both. In South Houston alone, 85% of residents were without power at one point. A boil order was in effect for 13 million people.

As of Thursday evening, at least 40 people had died across the country because of the Arctic conditions, according to a count by The Washington Post.

Texas was especially hard hit because most of its power grid is isolated from the interconnected networks serving the eastern and western parts of the U.S. That made it difficult to import energy from other states when frozen pipes shut down generating station.

The Electric Reliability Council of Texas (ERCOT), which manages 90% of the state's electricity, took other stations offline on Feb. 15 to avoid overloads that could have caused fires and triggered a major outage that could have lasted months. The intention was to start rolling blackouts, but in fact millions of Texans were left in the dark and without heat for days.

The failure of Texas' electric grid led faith leaders across the state on Thursday to call out Gov. Greg Abbott for a lack of leadership and preparation. They urged him to request assistance from the Federal Emergency Management Administration and dip into the state's $10 billion "rainy-day" fund to help Texans cover expensive home repairs and energy bills.

They also called on state leaders to act on a 2012 plan to modernize and weatherize the electric grid. They pointed to cities like El Paso in the west and Beaumont in the east, both of which receive electricity from out-of-state grids and did not face the same level of outages.

At a press conference later in the day, Abbott called on lawmakers to require that generators and power plants be winterized. He said generating capacity had returned to levels able to power the state's homes.

"We are calling for Gov. Abbott to first take responsibility for this gross negligence and stop finger-pointing. This is a gross act of negligence that has caused harm to the whole state of Texas, and it's time to put people over profits," the Rev. John Ogletree of the First Metropolitan Church of Houston said at a virtual press conference Thursday. The event was organized by the Network of Texas IAF Organizations, a nonpartisan coalition of 10 mostly faith-based organizations statewide that represents more than 1 million people.

"The state leadership has known that this needed to change, and they have done nothing," Elizabeth Valdez, director of Texas IAF, told EarthBeat.

"The storm may have been an act of nature, but the devastation of the electrical grid shutdown is an act of sheer negligence," Auxiliary Bishop Greg Kelly of the Dallas Diocese added in a statement.

Kelly and other faith leaders who spoke during the press conference and with EarthBeat described the struggles facing their state's people because of the freeze: Temperatures in homes hovering at 30 degrees. Elderly people unable to use dialysis machines. A 76-year-old woman sleeping in her car for warmth.

Churches that would typically offer shelter could not because they too lacked power and water. Divine Providence Sr. Jane Ann Slater, chancellor of the San Antonio Archdiocese and a leader with Communities Organized for Public Service and the Metro Alliance, called it "a real devastating situation." 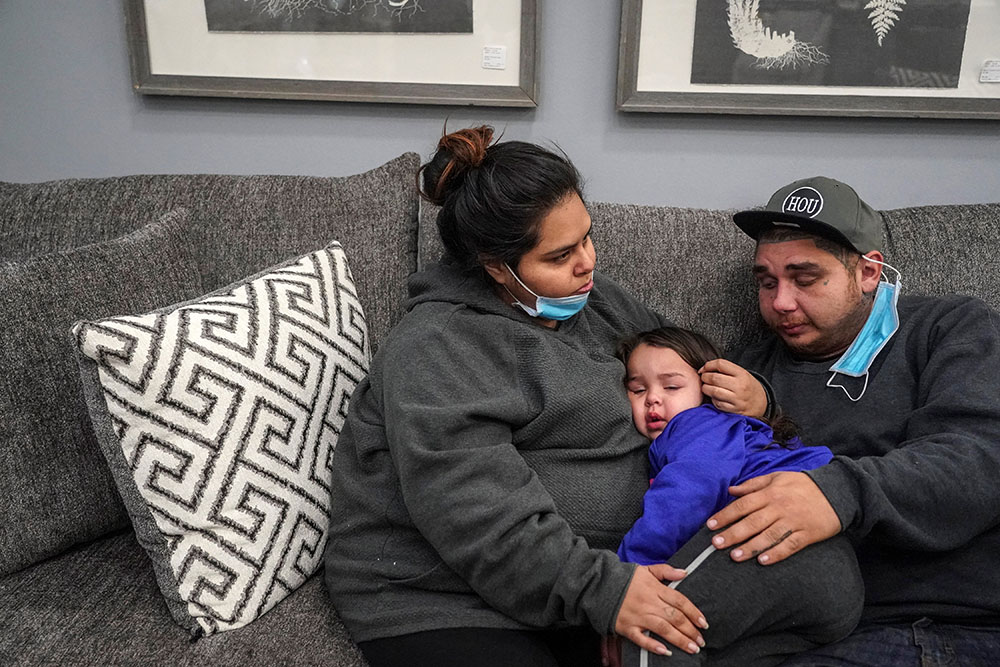 Patrick Youngblood and his wife, Marisol, comfort their daughter Audrey at Gallery Furniture store in Houston, which opened its doors as a warming station Feb. 17 after winter weather caused electricity blackouts throughout the state. (CNS/Reuters/Go Nakamura)

The power outages have been widespread. Even Cardinal Daniel DiNardo of Galveston-Houston had to vacate his residence Thursday after it lost power and water service. As of Thursday, the state was operating 331 warming centers.

But faith advocates stressed that although much of the state has experienced outages, they have hit low-income communities hardest. Along with the danger posed by lack of heat in frigid temperatures, burst pipes and other home repairs will drive up costs for people already struggling to get by.

The winter storm that struck Texas and other parts of the central U.S., while atypical, was not unexpected.

On Feb. 8, ERCOT warned that extreme cold temperatures in the coming week could bring "record-breaking demand" for electricity as people turned up the heat to stay warm.

Climate scientists say that warming in the Arctic region, where temperatures have risen by more than the global average, could be destabilizing circulation patterns in the atmosphere, pushing colder air south.

While the winter storm shut off power, it also reignited debates over Texas' use of renewable energy, as a number of the state's top conservative politicians took to shouting at the wind. They included the governor and U.S. Sen. John Cornyn, who both used the storm to argue against renewable energy, pointing to the freezing temperatures that forced roughly half the state's wind turbines to shut down.

But the deep freeze also hit natural gas infrastructure, freezing lines and wellheads and disrupting pressure levels. Natural gas provides roughly half of Texas' electricity, while wind accounts for about 25%. 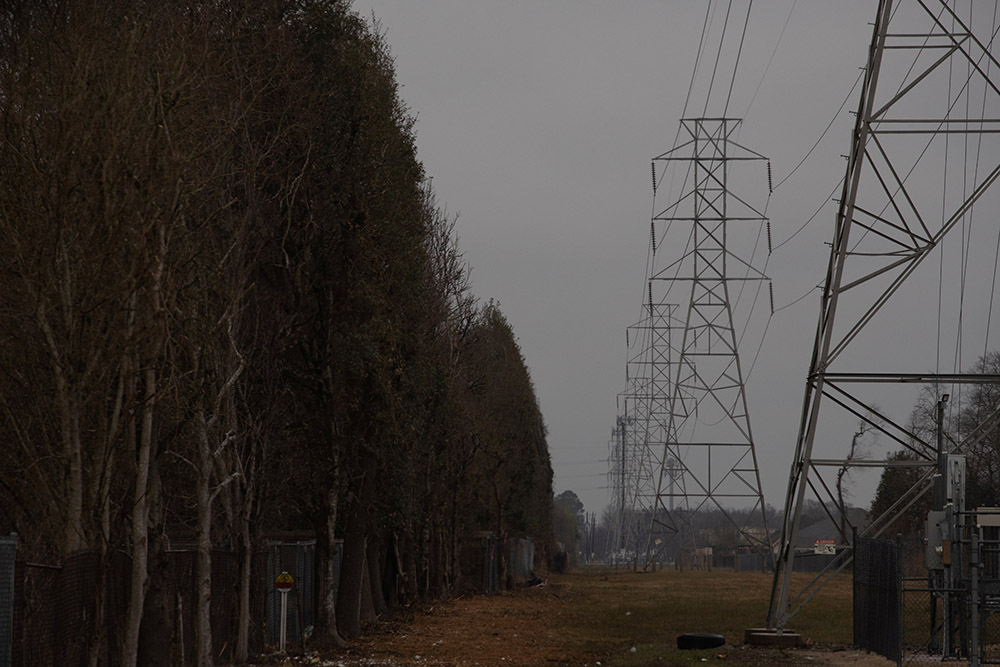 Critics of the attacks on wind energy pointed out that the entire grid lacks weatherization, as the cold also crippled natural gas-, coal- and nuclear-powered plants. They noted that wind turbines operate regularly in colder climates elsewhere in the U.S., like Iowa, and in Scandinavian countries and even Antarctica.

Erin Lothes, a theologian who studies energy ethics at St. Elizabeth University in Morristown, New Jersey, said the attempts to scapegoat renewable energy show "the pervasiveness of climate denial." That attitude can have serious real-world consequences, she added, when people reject not only science, but solutions for mitigating and adapting to climate change, as well.

"This denial is deadly," she said.

Faith leaders worry that the storm's death toll could balloon in coming days.

Bee Moorhead, executive director of Texas Interfaith Power & Light, said the situation is particularly dire for migrants at the border who are living in tents or at detention centers. A group that monitors the detention centers, Angry Tias & Abuelas of the Rio Grande Valley, has made urgent requests for donations to provide water, blankets and pajamas.

Affiliates of the state Interfaith Power & Light are also collecting personal stories of how the winter storm and power outages have impacted Texans to bring to lawmakers as they develop responses to address problems and prevent them from recurring. Moorhead said that after past disasters, the public has moved on quickly, and no solutions were implemented to lessen the risk of destruction, something they hope to avoid this time.

A version of this story appeared in the March 5-18, 2021 print issue under the headline: Texas faith leaders call out 'sheer negligence' behind power outages.