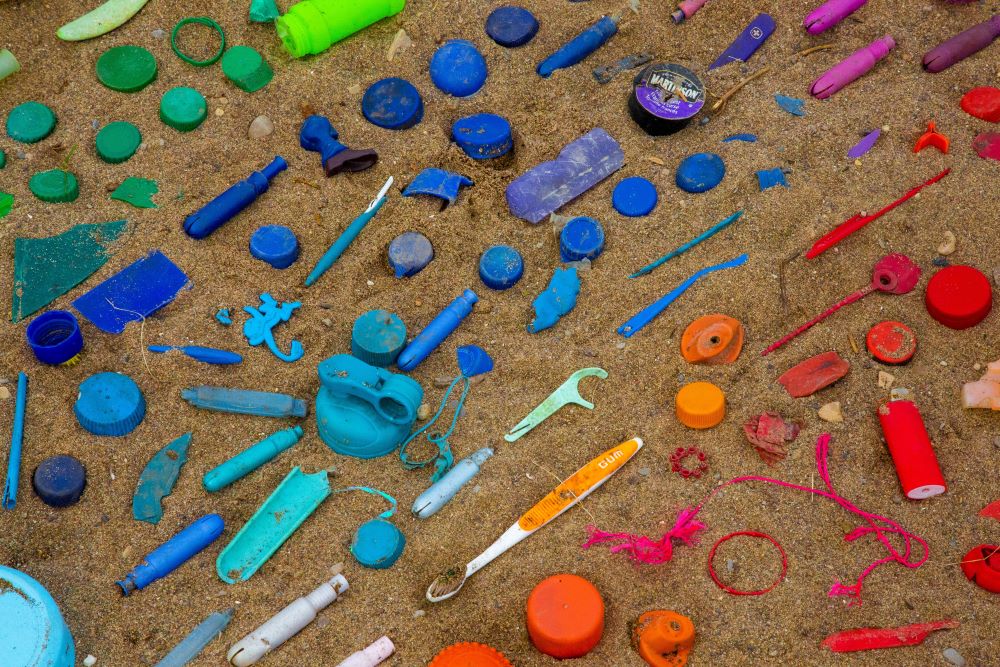 This plastic was collected during a 2019 harbor cleanup in Hamilton, Ontario. A World Economic Forum study found that plastics in the ocean could outweigh fish by 2050. (Unsplash/Jasmin Sessler)

Our "human ability to transform reality," Pope Francis underscores in Laudato Sí', “must proceed in line with God’s original gift of all that is” (LS 5). My previous commentary on Pope Francis' call for degrowth, or radical abundance without economic growth, emphasized how global economic structures and a monoculture oriented to capitalist “growthism” — insistence on unabated economic growth— destroys the planet.

This commentary suggests five public policy areas to facilitate a shift from a destructive growth economy toward a "circular" economy that regenerates cycles of nature and the Earth by eliminating waste and pollution, and reusing, repairing and recycling products and materials.

As the ecologist Vandana Shiva explains, capitalist growthism does not count the Earth's natural life cycles, such as its powerful hydrological water cycles, as valuable until a corporation like Coca-Cola extracts water from the Earth and creates a bottle of water or soda. The obscenity of this anti-life system is that water extraction counts as "growth," even as the bottling process destroys Earth's hydrological cycles and impoverishes local economies.

The Global North's fossil fuel-based economy is overshooting Earth's limits so much that ice-sheet collapse, massive forest loss (including the Amazon), abrupt changes in ocean circulation and biodiversity loss are likely irreparable according to the Sixth Assessment Report by the scientific working group of the U.N. Intergovernmental Panel on Climate Change, released in early August.

As the ecological anthropologist Jason Hickel explains in his primer Less is More, degrowth is not primarily about reducing GDP; more importantly, "it is about reducing the material and energy throughput of the economy and bring it back into balance with the living world, while distributing income and resources more fairly, liberating people from needless work, and investing in public goods people need to thrive."

"Throughput" is energy and resource flows in and out of the economy and nature. The problem of growthism, especially in the Global North, is that its throughputs mean more air pollution, mineral extraction, habitat destruction, carbon emissions and more climate breakdown, more ocean acidification, more water pollution and an ocean in which there may be more plastic than fish by 2050.

Here are five public policy areas that can be developed to facilitate a post-growth, regenerative economy:

End planned obsolescence. If we are going to live in balance with the living world, we can begin by ending "planned obsolescence," the practice of "deliberately shortening a product's useful life by a manufacturer to increase consumption." The American industrial designer Brooks Stevens popularized the term in the 1950s, describing how "our whole economy is based on planned obsolescence."

Instead, we need to conscientiously control which resources we use and how. Hickel recommends a "right to repair," rendering it illegal for companies to produce things that can't be repaired. The World Business Council for Sustainable Development suggests an additional option, shifting to leasing arrangements where companies provide products and maintain them in order to ensure long lifespans and shared use. Finally, we can require that any new product meet ethical ecological standards that facilitate regeneration of Earth's natural cycles.

Cut advertising. According to a recent study, advertising plays a key, albeit indirect role, in climate and ecological degradation by encouraging "materialistic values and goals, the consumption-driven work and spend cycle," that are in "conflict with prioritizing the transcendent, 'larger-than-self' aims involved in caring about the environment."

Scientists warn that advertising and economic affluence compound the problems of a consumption-driven economy by exacerbating social and economic inequalities and driving higher material, energy, water and land use. For example, Hickel explains in Less is More that clothing retailers now design clothes to be discarded so that consumers buy new to keep up with the latest fashions. The problem for the planet is that the clothing "industry's material use has skyrocketed to over 100 million tons per year, and energy, water and land use have soared right along with it."

Scientists warn that advertising and economic affluence compound the problems of a consumption-driven economy by exacerbating social and economic inequalities and driving higher material, energy, water and land use.

São Paulo and Paris demonstrate how reducing outdoor ads or completely banning ads in the vicinity of schools promotes human and environmental health. Other cities, like London, England and Grenoble, France, have replaced advertisements with trees, public art, and community notices.

Shift from ownership to usership. Shifting from ownership to usership of products and services is a critical way to move toward a circular economy in harmony with the Earth's life cycles. If 10 neighbors share one lawnmower, for example, that reduces demand for lawnmowers by a factor of 10, while saving time and money for all neighbors. Localities that expand shared use can also significantly reduce landfill and waste. Scaling down the total number of cars through shared usership and expanding public transit offer the most efficient ways to reduce materials and energy necessary to move around. Creating a bicycling infrastructure and culture also improves health and mitigates climate change.

End food waste. Project Drawdown, whose mission is to reach "the point in the future when levels of greenhouse gases in the atmosphere stop climbing and start to steadily decline … as quickly, safely, and equitably as possible," finds that the "global economic, environmental, and social cost of food wastage is estimated at US$2.6 trillion" and "generates unnecessary greenhouse gas emissions and wastes both water and land, negatively impacting natural ecosystems." The U.N. Food and Agriculture Organization offers 15 tips to help people "make not wasting food a way of life."

Scale down ecologically destructive industries. The World Resources Institute found that cattle raising is the single largest industry contributing to global deforestation. As Hickel puts it, "the Amazon is literally being burned for the sale of beef" yet "beef accounts for only 2% of calories humans consume." Other ecologically destructive industries that should be scaled down include armaments, private jets, single-use plastics, SUVs, building "McMansions" (house sizes in U.S. have doubled since 1970s) and commercial airlines.

This cluster of policies offers the possibility of living "in line with God's original gift" of life and love (Laudato Si'). Hope for life and its regeneration is in our hands.