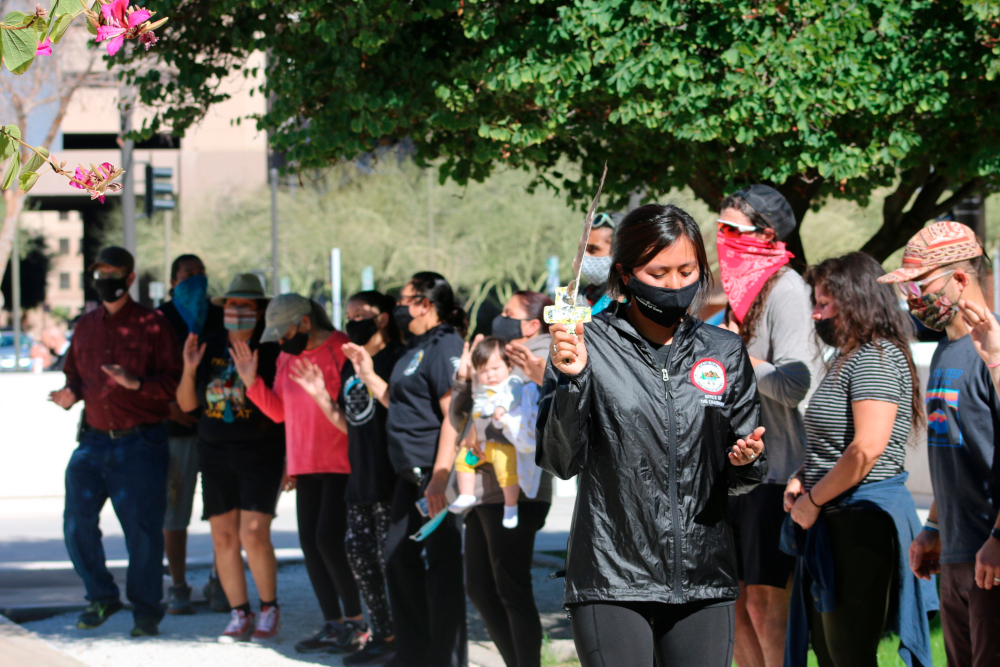 Naelyn Pike, who is Chiricahua Apache, leads a prayer outside the federal courthouse in Phoenix, Tuesday, Feb. 2, 2021. She's part of the group Apache Stronghold that is asking a federal judge to keep the U.S. Forest Service from turning over a parcel of land that Apaches hold sacred to a copper mining company. (AP/Cheyanne Mumphrey)

The Biden administration is pulling back an environmental review that had cleared the way for a parcel of federal land held sacred by Apaches to be turned over for a massive copper mine in eastern Arizona.

The U.S. Department of Agriculture said Mar. 1 that it likely will take several months to further consult with Native American tribes and others about their concerns over Oak Flat and determine whether the environmental review fully complies with the law.

The agency cited President Joe Biden's recent memo on strengthening relationships with tribal nations, and regularly consulting with them in a meaningful way.

The USDA and the U.S. Forest Service acknowledged they can only do so much. Congress mandated that the land be transferred to Resolution Copper no later than 60 days after the final environmental review was published. The document was released in the last days of Donald Trump's administration.

Michael Nixon, an attorney for the Apache Stronghold group that filed tthe first of three lawsuits seeking to stop the land exchange, said the USDA's decision is welcome but doesn't have much impact without intervention from the courts or Congress.

"Oak Flat is still on death row," he said. "Essentially, they're just changing the execution date."

Dan Blondeau, a spokesman for Resolution Copper, said the company is evaluating the decision.

The parcel of land in the Tonto National Forest east of Phoenix was set to be transferred to Resolution Copper by mid-March for one of the largest copper mines in the U.S. At least three pending lawsuits have raised concerns over religious freedom rights, land ownership and violations of federal law.

Apaches call Oak Flat "Chi'chil Bildagoteel." The land near Superior has ancient oak groves, traditional plants and living beings that tribal members say are essential to their religion and culture. Those things exist elsewhere, but Apache Stronghold said they have unique power within Oak Flat.

The effort to protect Oak Flat has the backing of the Poor People's Campaign, environmental groups, religious liberty scholars, the National Congress of American Indians and others. Democratic U.S. Rep. Raul Grijalva said Mar. 1 he would again introduce a bill to reverse the land transfer "to make sure this needless controversy is settled on the side of justice once and for all."

Gov. Doug Ducey and other Republicans have touted the jobs the mine could bring to Arizona. He said Mar. 1 he's "extremely disappointed" in the decision to slow progress on the mine.

"An effective and predictable regulatory environment is a critical factor in Arizona's booming economy," he said in a statement. "In Arizona, we follow what works. Undoing lengthy, comprehensive and already completed federal environmental studies on a whim with the changing of federal administrations doesn't work."

The land transfer was included as a last-minute provision in a must-pass defense bill in 2014 after it failed for years as stand-alone legislation. Resolution Copper would get 3.75 square miles (9.71 square kilometers) of national forest land in exchange for eight parcels it owns elsewhere in Arizona.

Resolution Copper, a joint venture of global mining companies Rio Tinto and BHP, said it has invested $2 billion so far on the project but actual mining wouldn't start for at least 10 years after the land transfer. Eventually, the mine will swallow Oak Flat.

Resolution Copper said last week that it hired a company partly owned by members of the San Carlos Apache Tribe to run a campground at Oak Flat and ensure access to trails after the land is exchanged and until it's safe for people to be there.

"We will continue to consult and seek community input as we refine and shape the Resolution Copper project over the coming years, to minimize any impacts on Oak Flat," project director Andrew Lye said.