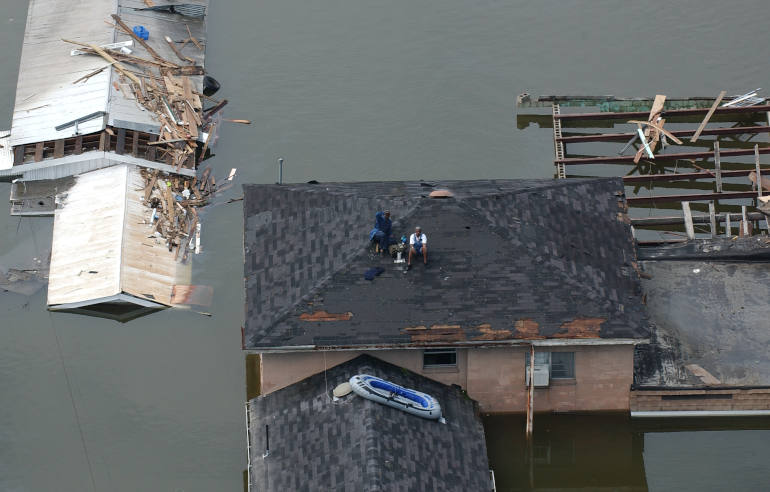 People sit on a roof waiting to be rescued after Hurricane Katrina struk New Orleans in August 2005. (Wikimedia Commons/Jocelyn Augustino/FEMA)

If you have followed the debates among Democratic presidential hopefuls, you likely have heard the term "environmental justice" mentioned more than a few times.

But what does that actually mean?

That's the focus of this week's Burning Question, which comes to us from Franciscan Sr. Joan Brown, executive director of New Mexico Interfaith Power and Light. (Brown is a member of the EarthBeat advisory panel.) She asks "What is environmental justice and why is it important to integrate it into our work on climate change and what does it look like?"

What exactly is environmental justice?

A good starting point is the definition offered by Robert Bullard, considered the "father of environmental justice," who put it this way to The Guardian: "It's the principle that all people are entitled to equal environmental protection regardless of race, color or national origin. It's the right to live and work and play in a clean environment."

Similarly, the U.S. Environmental Protection Agency describes environmental justice as "the fair treatment and meaningful involvement of all people regardless of race, color, national origin, or income, with respect to the development, implementation, and enforcement of environmental laws, regulations, and policies."

Poor air quality due to a nearby oil drill site. Poisoned drinking water from a chemical plant in the area. Low-income housing located in a floodplain. These are examples of what people reference when talking about environmental justice.

In many cases, it's minority communities, the poor and people on the margins of society disproportionately exposed to these threats to a safe and healthy life. Environmental racism is a term that emerged from environmental justice.

Bullard, who is the distinguished professor of urban planning and environmental policy at Texas Southern University, says that four of the major priorities of the environmental justice are "reducing environmental, health, economic and racial disparities."

While Pope Francis never uses the phrase "environmental justice" in his 2015 encyclical "Laudato Si', on Care for Our Common Home," he makes references to cases that fit it: health hazards to the poor from exposure to atmospheric pollutants; developed countries exporting solid waste and toxic chemicals to developing countries; multinational companies employing less stringent environmental standards than in their home countries.

Where did it originate?

The roots of the environmental justice movement in the U.S. extend back to the civil rights movement and the 1968 Memphis Sanitation Strike, which protested unsafe working conditions and drew the support of Dr. Martin Luther King Jr.

The issue gained more attention in the 1980s, when civil rights activists and environmentalists staged a sit-in in Warren County, North Carolina against toxic waste being dumped in a nearby landfill. That demonstration, which ultimately failed, is viewed as one of the first major moments of the environmental justice movement.

Later in the decade, two reports, one from the U.S. General Accounting Office and another by the United Church of Christ's racial justice commission, highlighted the disproportionate proximity of toxic waste facilities near communities of color.

In 1991, the National People of Color Environmental Leadership Summit drafted 17 principles of environmental justice. Among them:

One way to look at this question is in reverse: that is, what does the absence of environmental justice look like?

The 2014 water crisis in Flint, and the response to it, exposed a number of problems related to environmental justice, as a cost-saving decision to switch the city's water source to the Flint River resulted in lead-contaminated water flowing from the faucets in a largely African American community.

Environmental injustice also looks like the aftermath in Puerto Rico following Hurricane Maria and in New Orleans following Hurricane Katrina. The Standing Rock Sioux opposition to a pipeline crossing their sacred lands, and the Mauna Kea standoff against a telescope on a sacred Hawaiian mountain. The legal crusade waged by West Virginian farmers and local communities against chemical dumping, as recently depicted in the film "Dark Waters."

And those are just in the U.S.

Earlier this month, Grist published a list of environmental justice stories to watch in 2020. Among them: residents in South Carolina revitalizing former industrial sites into green space for renewable energy, real-time air quality monitoring in Texas; a court battle to force the EPA to investigate civil rights complaints; and efforts by environmental organizations to build "bigger, deeper coalitions."

"To address ongoing environmental justice issues, it was absolutely critical that those impacted daily have a seat at the table," Gov. Gretchen Whitmer said. "We must ensure that the implementation and enforcement of environmental protections, regulations, and policies in Michigan will be fair and meaningful to all Michiganders, regardless of geography, race, color, origin, or income."

How does environmental justice relate to climate change?

This line from Laudato Si' has become a central tenet in Catholics' approach to environmental issues, and specifically climate change. That environmental destruction, including those that accompany warming global temperatures, impacts poor and marginalized communities often first and more acutely. Or as stated in the final document of the Vatican synod on the Amazon, "Ecology and social justice are intrinsically united."

In the encyclical, Francis states the impact of global warming, fueled by development and consumption in developed countries, "has repercussions on the poorest areas of the world, especially Africa, where a rise in temperature, to­gether with drought, has proved devastating for farming."

Poor communities are more likely to live in floodplains, which are vulnerable to sea level rise, or near fossil-fuel burning power plants, or areas with less reliable water supplies.

Another term related to environmental justice and climate change — and specifically climate solutions — is "just transition." It's the principle that as the world phases out fossil fuels, it doesn't leave behind those communities economically dependent on the industry, and that such a shift doesn't contribute to economic or social inequality.

Groups like Climate Justice Alliance and the Sunrise Movement, which has pushed for a Green New Deal, have stressed a just transition as a central piece of any climate solutions.

Last week, the 100% Network — an association of organizations representing frontline communities, indigenous people and people of color — released a 92-page policy outlining an equitable and just approach to transitioning to a clean energy future.

Climate change has also raised the idea of intergenerational justice, that future generations are among those disproportionately impacted by the consequences of a warming planet driven by decisions and actions of prior generations. This idea has been emphasized by Pope Francis and faith groups alike as they have stressed the urgency to address climate change now.

How are faith communities involved in this?

As noted above, religious leaders have been involved in the environmental justice movement since its beginnings, whether Dr. King and the Southern Christian Leadership Conference supporting the Memphis sanitation strike, or the United Church of Christ study into the connection between toxic waste sites and racism.

Today, the revived Poor People's Campaign, led by the Rev. William Barber and the Rev. Liz Theoharris, has made addressing ecological destruction a core tenant of its moral agenda, and has highlighted access to clean water and water for low-income populations in its demonstrations.

Among Catholics, work on environmental justice can be seen in much of the work of religious congregations, many involved in the rebuilding efforts after weather-related disasters, including in Haiti in the wake of hurricanes and earthquakes, but also in stands with indigenous communities against industrial projects that threaten their way of life and access to resources. Since 2005, Catholic Charities of the Stockton, California, Diocese has operated its Environmental Justice Project to address air quality, climate change and sustainable growth in the San Joaquin Valley.

Catholics have also been on the other side of environmental justice issues, too, such as a Los Angeles neighborhood protesting air pollution traced back to a nearby oil drilling facility on land owned by the Los Angeles Archdiocese.

The U.S. Conference of Catholic Bishops has an environmental justice program within its Department of Justice, Peace and Human Development. In the past year, it has expressed concern with a proposed rule by the Trump administration to lift regulations on mercury and other air pollutants from power plants, saying such a move "could ultimately cause great harm to human health and the environment."

USCCB is one of four major religious organizations within the National Religious Partnership for the Environment, whose work includes pursuing environmental justice. A symposium on the issue was held in April at the Catholic University of America.

In 2016, the African Methodist Episcopal Church passed its first-ever climate change resolution that in part highlighted the disproportionate impact of climate change, especially in terms of health, on black and low-income communities in the U.S. and abroad.

Within the American Baptist Churches USA is a Creation Justice Network, while the Unitarian Universalist has its own Ministry for Earth based in environmental justice.

The United Church of Christ employs a minister for environmental justice (currently Brooks Berndt), and its blog The Pollinator keeps church members up to speed on environmental issues. A December post explained why people of faith should care about a carcinogen linked to the production of antifreeze and medical sterilizers.

The Quaker Peace and Social Witness, a committee of the Quakers in Britain, recently created a resource on climate justice, writing in part that “climate breakdown is a result of our unjust global economic system” and that “the wealth of the UK and other industrialised countries is built on the violent and racist exploitation of people and the earth.”

Where can I learn more?

Below are some resources for more information about environmental justice and organizations working toward it:

The NAACP environmental and climate justice program: The environmental justice arm of the National Association for the Advancement of Colored People.

The Center for Race, Poverty and the Environment: a national organization based in the San Juaquin Valley, an area in central California that is one of the nation's poorest regions and home to the worst air pollution in the country

This story appears in the Burning Questions feature series. View the full series.
A version of this story appeared in the April 3-16, 2020 print issue under the headline: What is environmental justice?.