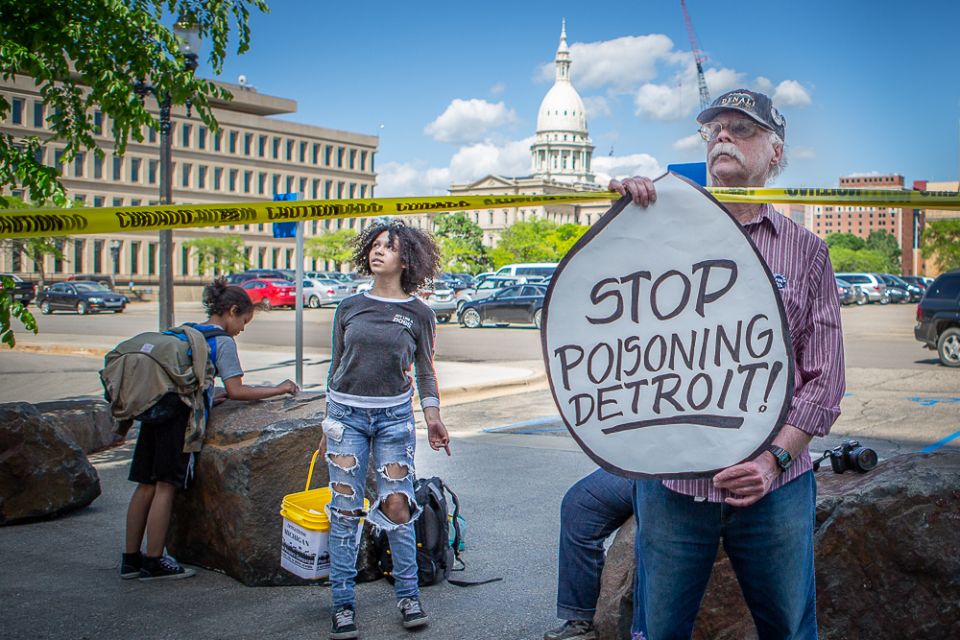 The Poor People's Campaign, A National Call for Moral Revival lead hundreds of poor people, clergy and advocates in protest at the Michigan State Capitol and blocked the entrances to the Michigan Department of Environmental Quality, to highlight the state’s ongoing water crisis. (Newscom/ZUMA Press/Michael Nigro)

Entering its fourth week, the Poor People's Campaign turned its attention Monday to health care and the health of the earth as 40 days of nonviolent civil disobedience continued its pursuit of changing the moral conversation in America.

In Michigan, that meant water.

More than 30 people were arrested June 4 after they blocked parking garage exits at the Lansing headquarters of the Michigan Department of Environmental Quality — a target of anger for many of the state's citizens following the Flint water crisis. Earlier, the activists wrapped the building in crime scene tape and obstructed its entrances.

"Literally, we shut the building down," said Mercy Sr. Mary Ellen Howard, who was among those arrested and charged with obstruction and resisting an officer.

Howard said she became engaged in the state's water issues after seeing the threat it posed to public health, particularly in Detroit where she lives. For 20 years she ran the St. Frances Cabrini Clinic there, which provides free services for uninsured people.

"We need water to live, and the best way to protect the spread of infection is to wash your hands. And if you haven't got water, you're not washing your hands and infection will spread. And it is spreading in Detroit," she told NCR.

Howard criticized a city policy in Detroit, its 39 percent poverty rate among the nation's highest, that in 2014 began shutting off water service for residents with unpaid water bills. The Detroit Free Press reported in March that more than 17,000 people are at risk of shutoffs this year; two years ago, approximately 28,000 people faced losing water access.

The demonstration and preceding rally, drawing 450 people, also admonished the water crisis in Flint, where a cost-cutting switch in water sources four years ago, from Lake Huron to the Flint River, resulted in unsafe lead levels in drinking water, and subsequently, numerous health maladies, including a higher rate of fetal deaths. Despite the state declaring the water is now safe to drink, residents remain skeptical.

In addition to protesting the state environmental authority for its role in Flint, the local Poor People's Campaign questioned the department's decision last month to approve a request from Nestle Waters North America to increase its water withdrawal from Michigan's groundwater table, despite more than 80,000 public comments opposing the permit, compared to 75 in favor.

Howard said the issues highlighted by the Poor People's Campaign are "moral issues." A participant in each of the demonstrations so far, the Mercy sister said the campaign is "building a grassroots community of people who are outraged" over how they have gone overlooked or unaddressed by their governments at every level.

"If you know the truth, you have an obligation to speak it, I think. And you need to get people to listen, and sometimes that requires that you create a scene and get arrested," Howard said. 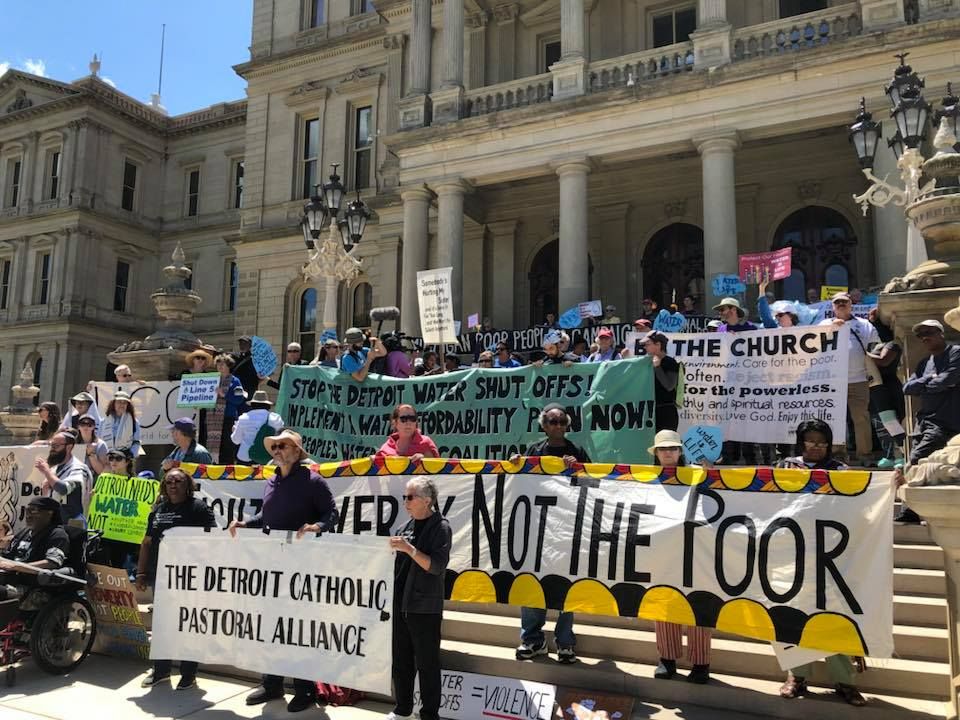 Protestors lined the steps of the capitol in Lansing, Michigan. (Courtesy of Michigan Poor People's Campaign)

God requires only a remnant

Similar acts of nonviolent civil disobedience took place in more than 30 states during the fourth week of the Poor People's Campaign, A National Call for Moral Revival. The campaign, a rebirth of the Rev. Martin Luther King Jr.'s final project held 50 years ago, has sought to reclaim the moral narrative in America through 40 days of actions directed at addressing the issues of systemic racism, poverty, ecological devastation and militarism.

While fellow co-founder Rev. Liz Theoharris was among those arrested in Lansing, Barber and other demonstrators in the Kentucky capital were blocked from entering the Capitol building en masse, the Associated Press reported. After activists stayed in the Capitol overnight several weeks ago, state police enacted a policy requiring demonstrators to enter two at a time, with no one else allowed inside the building until the prior two exited the building.

"That's not America," Barber said as activists attempted to enter, according to the Associated Press. "People who want health care, who are dying because they don't have it ... have a right to redress their government. This is a public building."

At the rally beforehand on the steps outside the capitol, speakers addressed the state's recent push to add work requirements to Medicaid access and the public and environmental health hazards caused by chemical facilities and coal mines. A father of five described his inability to obtain health coverage while working two jobs; a miner of 40 years told of the fight to hold coal companies to financial commitments for black lung disease treatment for their workers.

Eboni Cochran of REACT Louisville, a local environmental justice group, detailed the hazards on nearby communities from chemical facilities outside Louisville in a region called "Rubber Town." She said while companies often complain about the economic costs of making environmental and health improvements to their facilities, "there is very little consideration of how these chemical facilities affect the economies of the families living at the fence line."

"When an asthmatic child is sick at school, this affects their education, which could affect their future earning power. When a parent has to miss work to care for their child, this affects their income and job stability. When parents have to purchase medication for a child, this is money coming out of the family budget. You get the picture," she told an energetic crowd.

Barber, a Protestant pastor who founded the Moral Mondays movement in North Carolina, quoted the Book of Amos where God requires only a remnant, or small group, to go in the streets and cry out about injustice for the Lord to hear them and intervene.

Sacrificed on the altar of greed

In Washington, D.C., the rally outside the Capitol Building brought a casket to represent all those who have died from a lack of healthcare and from disregard for the environment. The casket was later removed after organizers were told such symbols are not permitted on the Capitol grounds.

The Rev. Damaris Whittaker, a United Church of Christ minister from New York City, addressed a recent Harvard University report that estimated 4,645 Puerto Ricans died as a result of last September's Hurricane Maria — more than 70 times the number than the U.S. government total of 64, and two and half times more than those who died as a result of Hurricane Katrina. The researchers cited a lack of access to medical services as a large factor for the immense death toll.

"I ask the citizens of this country, what is the value of a Puerto Rican life?" Whittaker said, reminding the crowd that Puerto Ricans are American citizens.

Whittaker, who said she visited some of the most impacted towns on the Caribbean island, called for "sustainable and green reconstruction" of Puerto Rico and an audit of its debts to allow for its people to recover from the storm.

"When we all come together, what a day of justice it's going to be."

"While Wall Street continues to profit from the Puerto Rico debt, Puerto Ricans are dying. And it is time that we call it by its name: It is sin. It is evil. It is unjustifiable," she said.

Marianne Comfort, justice coordinator for Earth, anti-racism and women for the Sisters of Mercy of the Americas, and Patrick Carolan, executive director of Franciscan Action Network, were among the demonstrators arrested in the U.S. Capitol Rotunda.

Outside arrests, roughly 1,200 members of the Franciscan community supported the Poor People's Campaign June 4 through a fast coordinated by Franciscan Action Network. The fast focused on the campaign's themes of heath care and ecological devastation, with an emphasis on the steps individuals can take to reduce their own personal carbon footprint toward combatting climate change.

The Franciscans Sisters of Allegheny, in New York, invited their entire community, spread across four countries, to partake in the fast. Sr. Margaret Magee, the congregation's associate minister and president of the Franciscan Action Network board, said interconnectedness of issues emphasized by the Poor People's Campaign fits part and parcel with the Franciscan mission for justice, peace and the integrity of creation.

"This is part of our Franciscan DNA," she said. "… A person's right to health and the care for our planet is all of one piece." 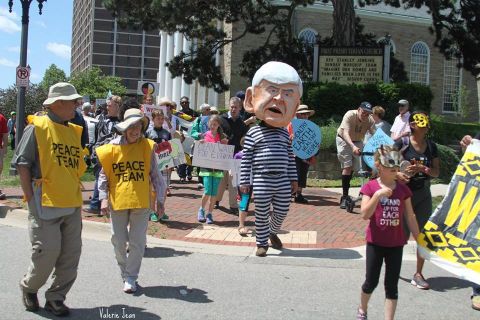 One protestor in Lansing wore a prison uniform and an effigy of Michigan Gov. Rick Synder. (Courtesy of Michigan Poor People's Campaign)

Greater hope in the people themselves

As part of the Lansing action, demonstrators staged a mock trial of Michigan Gov. Rick Snyder in the streets connecting his office with the capitol, with one protestor wearing a black-and-white striped prision uniform and a papier-mâché effigy of the governor's head.

Howard, the Mercy sister, said the governor is not listening to the people's concerns, and that he and the Michigan Department of Environmental Quality have failed in protecting their citizens and the state's resources, pointing to a mineral oil spill in April in the Straits of Mackinac that critics of the pipelines beneath the Great Lakes called predictable and a warning sign.

"We have a treasure surrounding Michigan, which we understand what a treasure it is. And it has to be protected, and right now it's not being protected by our elected officials. They have totally failed us in many ways regarding the water," she said.

As he has in past weeks, Barber highlighted the 170-plus electoral votes situated in the 13 former slave states of the South. "And if blacks and whites and brown people and others come together, we can fundamentally change the South," he said. "The South will rise again. It will not rise in racism; it will rise in justice, it will rise in equality."

The North Carolina minister pushed against what he called two lies of the region: that the problems of poor white people are because of poor people of color, and that the agenda advocated by Christian nationalism is God's agenda. At one point, a disability advocate who uses a tablet to speak got up from her wheelchair and, through a statement read for her, said the country is "in a serious crossroads of danger" and that "we ordinary folks have to make our voices heard, with our vote."

"When we all come together, what a day of justice it's going to be," Barber told the Frankfurt crowd.

Howard held doubts the midterm elections in November would have a significant impact in addressing the issues of the Poor People's Campaign. She has greater hope in the people themselves, through education of the issues and exerting public pressure to do something about them.

"Maybe over time we can get some good people in office and change things, but right now that just ain't happening," she said.