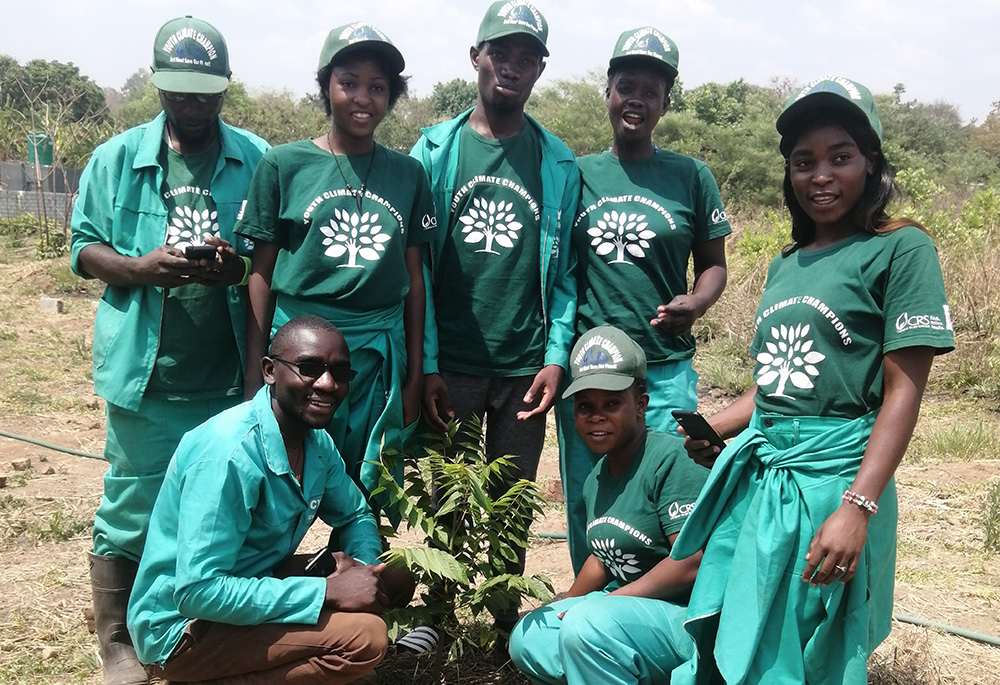 Youth Climate Champions, supported by Catholic Relief Services, plant trees and advocate for a move away from charcoal burning, which is worsening deforestation in Zambia. (Tawanda Karombo)

Grappling with poverty and his family's inability to provide for him and his siblings, 32-year-old Chrispen Mwene was just 13 when he started cutting down and burning trees to make charcoal in Zambia's Katoba district, about 120 kilometers outside the capital, Lusaka.

Now he is a member of the Youth Climate Champions, teaching community members about the hazards of the charcoal industry and advocating for alternative economic and energy options.

For many Zambians, the charcoal business provides an easy way out of poverty. Demand is always high for charcoal, especially in the rainy season, says Mwene, and there are always customers willing to pay on the spot for the energy commodity.

"I started cutting down trees to make charcoal at the age of 13 years. I was looking for a source of income as my family was unable to fend for us so there was no other option but to join others in the charcoal business," Mwene told Earthbeat.

Charcoal has become a major source of energy across southern Africa, where countries such as Zimbabwe and South Africa struggle with inadequate generation and supply of electricity, most of which is coal fired.

Zimbabwe and Zambia also partially rely on hydroelectricity from the Kariba Dam, which in the past three years has suffered drastically low water levels owing to prolonged droughts.

Apart from the inadequate supply of electricity, the cost of power is also beyond the reach of many Zambian users. Zambian finance minister Situmbeko Musokotwane warned in September that electricity prices for the southern African nation will be further increased gradually over the next five years.

This is part of economic policy reforms agreed upon with the International Monetary Fund that have paved the way for the removal of subsidies on fuel and electricity, creating problems for Zambian citizens who rely on the subsidies to afford this energy.

A charcoal trader in Zambia earns about $400 each month, a hefty payout for the country’s unemployed populace. Across major marketplaces and trading centers in the country, sacks of charcoal are traded daily. And on Zambia's roads, large trucks ferrying the commodity relentlessly make their way to local and regional marketplaces.

However, charcoal production comes at a big cost for Zambia as vast stretches of forestry are lost and mountain ranges lose vegetation cover, making the country one of Africa's most deforested. 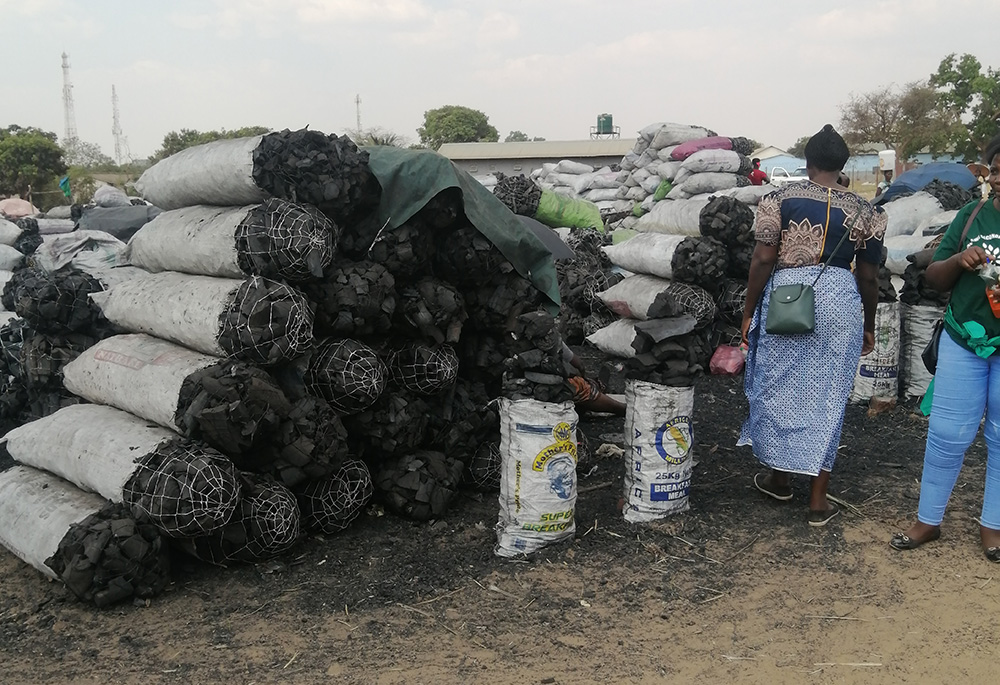 Traders peddle charcoal at Chongwe market in Zambia. Charcoal business is brisk business in Zambia, despite its destruction of forests and contribution to climate change. (Tawanda Karombo)

Counting the cost of charcoal

The Nature journal, quoting Erin Matson, a climate change consultant, reported in October that many governments have not introduced reforms such as protected-area regulations or fiscal incentives to encourage the private sector to safeguard forests.

Zambia is one such country that lacks regulations prohibiting deforestation and tree burning for charcoal. Yet a report from the World Resources Institute has been clear that deforestation of key forest cover in Africa and around the world contributes to alterations in weather patterns and climatic trends.

Deforestation in the Congo Basin "would likely lead not only to decreases in evapotranspiration but also to changes in monsoon circulation patterns" across the region.

Any "forest loss could also lead to modification of precipitation in other areas of Africa such as the Sahel region," adds the report. And based on simulations of complete deforestation of the Congo forest, regional rainfall is projected to be reduced by 8-40%.

These are the stark realities that confront African countries such as the Democratic Republic of Congo and Zambia that are losing forest cover at high rates. Efforts to slow or stop this trend require strong funding and commitment from global players.

The study estimates that forest conservation efforts require as much as $460 billion per year to enable nations to meet the 2030 goal of effective reduction of deforestation. Worse still, current commitments to this goal average below 1% of what is required. 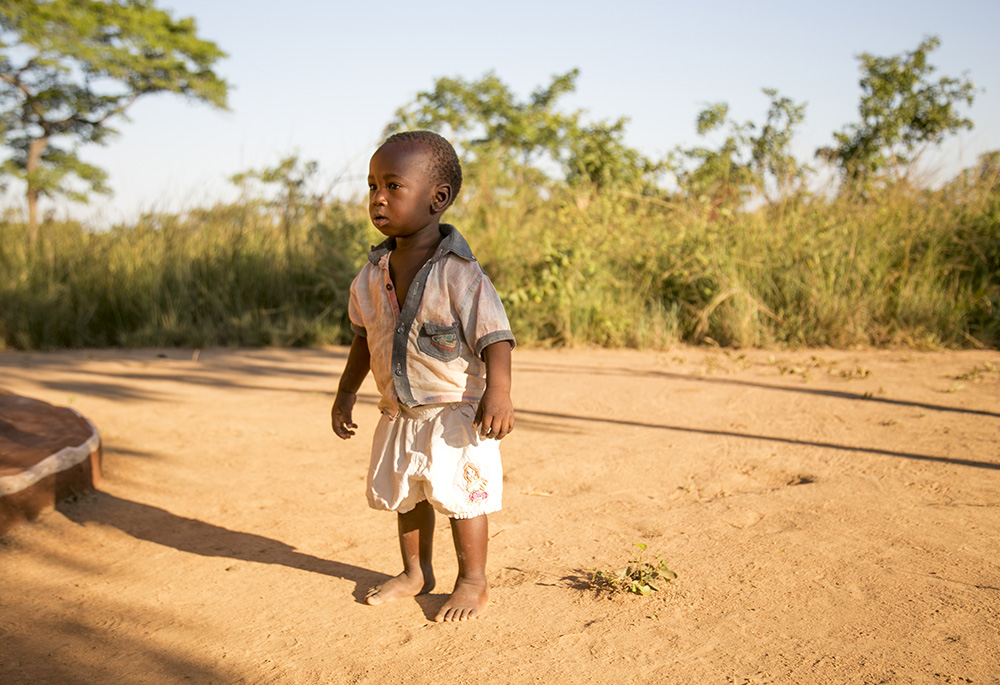 A Zambian child stands outside his home June 26, 2019, in the village of Ndombi in Zambia. (CNS/CRS/Michael Stulman)

In just one month, Samson Mwakawere, a 29-year-old villager from Katoba, cut down 35 big trees for charcoal making.

“I was targeting the big trees,” Mwakawere, now a team leader for Youth Climate Champions, a group of Zambian youth fighting for climate change mitigation in Zambia, told EarthBeat.

Amidst the seemingly neverending wave of deforestation that is fast reducing Zambia into a charred landscape with billowing smoke as trees burn for charcoal, Catholic and other agencies are stepping in.

Catholic Relief Services, or CRS, is capacitating youth with climate-smart, income-generating projects such as selling and distributing solar products to wean them off relying on deforestation and charcoal burning for income.

They campaign against deforestation and charcoal burning in Zambian communities, engaging those burning charcoal and encouraging them to step away from the practice.

"Many Zambian youths are cutting down trees for deforestation and we have to look at the situation in a holistic approach. They are burning trees for charcoal because there is demand for it so there is need to address both the push and pull factors," Dickson Matulula, the green initiatives project manager for CRS Zambia, told EarthBeat.

Unemployment is among the factors pushing many Zambians into deforestation and charcoal burning. However, there is demand for charcoal inside Zambia because of challenges with access to and cost of electricity, which makes charcoal a cheaper alternative for many households.

"There is demand for charcoal in the urban areas because of low access to electricity as well as high costs of electricity. If everyone has access to affordable electricity it means that no one will be using charcoal," Matulula explained.

In October, the Zambian government said it was formulating a national climate change adaptation and mitigation plan. The blueprint is aimed at entrenching mitigation programs and resilience against climate change impacts, said the minister of green economy and environment, Collins Nzovu.

According to Xinhua, he said the plan "will set out priority adaptation actions thereby directing investments into the building of the resilience of our people and the economy to the adverse impacts of climate change."

CRS' program is geared to change the mindsets of communities heavily involved in deforestation, advocating for awareness of the dangers related to the practices.

The program also engages community members to plant trees as part of a reforestation program supported by various organizations and corporations in the country. Limited alternative employment opportunities to eradicate the push factors for deforestation is a major problem there. 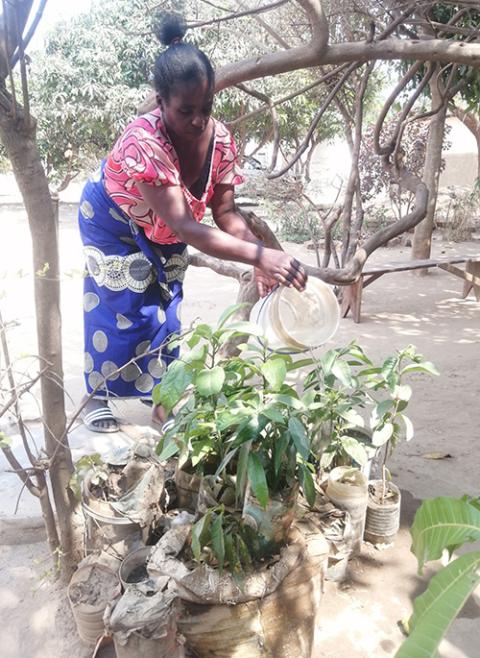 Grace Tembo has been educated about the dangers of using charcoal, and is preparing tree seedlings for planting at her homestead in Chongwe, Zambia. (Tawanda Karombo)

Fifty-four-year-old Grace Tembo is one of the community members in Chongwe, about 120 kilometers from Lusaka, that has been educated by the Youth Climate Champions on the dangers of activities that contribute to climate change, including deforestation and charcoal burning.

"The youths come out and teach us about the dangers that charcoal is posing to our environment through deforestation. They teach us to use cook stoves that are energy efficient and require twigs rather than charcoal or firewood for cooking," she told Earthbeat at her homestead in Chongwe.

Tembo has witnessed firsthand the impacts of climate change in Zambia at her small farming plot in the countryside. Yields for the staple maize and other crops have been falling over the past few years as dry spells and now frequent droughts affect farming with little to no rains.

This sharply contrasts with what she witnessed growing up when rainy seasons were predictable. She also said she cannot afford electricity for cooking, while hunger now affects many in her community because of the reduced yields.

Save the Children UK said this year that "farming families in Zambia are experiencing a slow and silent climate crisis that has driven about 13% of the population into severe food shortages."

"Farming families producing maize, the country's principal food crop, are being significantly affected by changes in weather patterns with the rainy season coming later each year, and the share of time spent in dry season or drought becoming progressively longer," the agency said.

For Zambia, other funding partners are stepping in to prop up climate change resilience, with the Global Environment Facility committing more than $6 million to a program earmarked for climate change adaptation projects in the Lukanga and Bangweulu areas.

But despite this importance, "wetland and forest ecosystems in Zambia are currently experiencing large-scale deforestation and degradation," added Kapata. 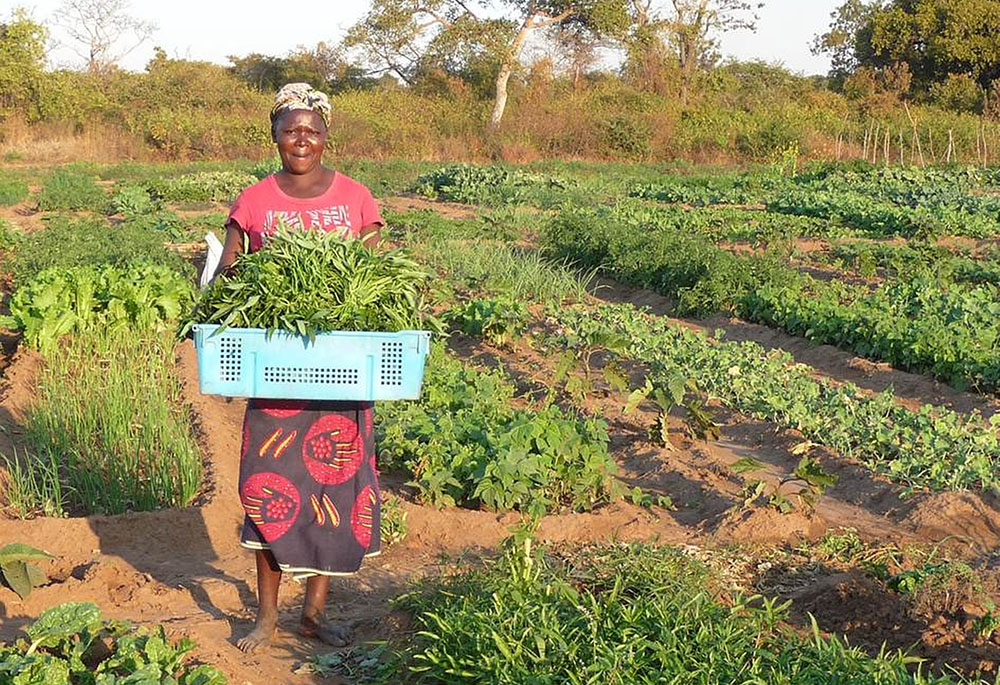 Other mitigation programs are taking shape across the African continent, helping it slow down loss of forest cover, with the 2022 Forest Declaration Assessment report noting that "deforestation rates in Tropical Latin America and Africa decreased in 2021 relative to the 2018-20 baseline," thanks to various reforestation initiatives.

The Central African Forest Initiative is helping the Democratic Republic of Congo and Gabon reform land use policies to incorporate forest preservation.

"The DRC and Cameroon are the largest contributors to deforestation in tropical Africa," according to the Forest Declaration Assessment.

Back in Zambia, the Youth Climate Champions are running reforestation programs at Katoba and Chongwe, where a primary school and a Catholic parish respectively have provided ground for a demonstration plot for reforestation.

The reforestation program is supported by Catholic Relief Services, which is also helping the youth target community households to plant trees at schools and at homes.

"We are fighting deforestation and tree burning for charcoal and it’s a bigger fight. But it’s a fight that we are winning," said 27-year-old Wali Bernard. Pointing to a dirty, almost dried up stream in Katoba, he added, "It will be good to see the seasons back to normal and predictability and the tree cover returning and climate patterns cooling and the streams flowing once again."