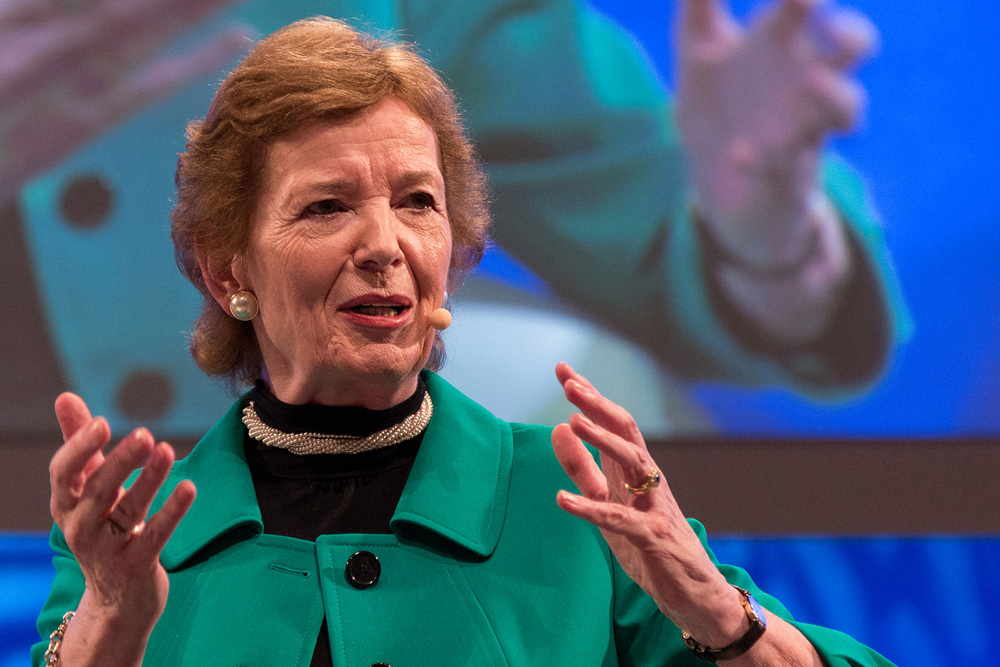 Mary Robinson, the former Irish president who has focused on climate change for the past decade, says the best way to prevent a climate catastrophe is disruption — disruption in the form of lawsuits, protests, family interventions, shareholder challenges and disinvestment in fossil fuels coupled with investment in renewable energy.

Speaking to an overflow crowd of more than 400 students and others at Boston College Sept. 11, Robinson delivered an urgent call to action laced with insistent hope.

"Every day, the news on climate change gets worse," she said, citing the latest readings of carbon dioxide in the Earth's atmosphere of 415 parts per million. The last time greenhouse gases reached that level was some 3 to 5 million years ago, before humans are believed to have first shown up on earth.

Since the world's governments have failed to take the steps outlined in the Paris agreement and the UN's 2030 report, Robinson argued that the time has arrived to replace voluntary measures with insistence on "full implementation of both."

"Get angry with those who have more power and responsibility."
—Mary Robinson

"People in all walks of life need to take three steps," Robinson said. They include:

By way of further encouragement, she said psychologists report that "climate action is the best way to get over climate anxiety."

In order to move people to take action, she said, we need to learn how to discuss the topic more effectively.

"I'd been aware that climate scientists are not good about communicating climate change," she said. "Either they talk about it in such scary ways that they frighten people or in such a dense way that nobody understands what they're talking about."

Although some analysts suggest avoiding terms such as "climate crisis" and "climate emergency," Robinson said she's decided the time has come to use precisely those words in place of "climate change." 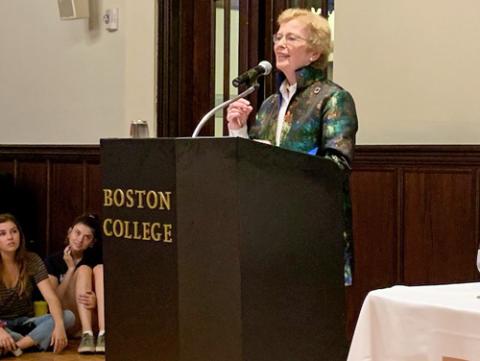 Most important in climate communications, she said, is telling the stories of people who've responded to enormous climate challenges with concrete steps aimed at addressing them.

That approach forms the backdrop for her 2018 book, Climate Justice: Hope, Resilience, and the Fight for a Sustainable Future and the framework for a podcast she's doing with Irish author and comedian Maeve Higgins called Mothers of Invention.

The podcast carries a tagline of "climate change is a man-made problem — with a feminist solution," a manifesto Robinson softened a bit by telling the audience she includes women in the term "man-made" and many men in feminist solutions.

Robinson left the Irish presidency in 1997 to become the United Nations' high commissioner for human rights and, in 2007, a member of The Elders, the group of world leaders formed by Nelson Mandela on his 89th birthday. In 2010, she founded the Mary Robinson Foundation — Climate Justice.

During a Q&A, a Boston College student drew sustained applause when she asked Robinson if she would join a student effort to persuade the school to divest its holdings in fossil fuel companies, a demand the school has rejected.

Robinson, a former chancellor of the University of Dublin, sidestepped the request to join the students' campaign. "Since I do have a microphone in my hand," she added, she called for investment in clean energy sources as well as divestment in fossil fuel companies. "I would like to encourage Boston College to move in that direction as quickly as possible."

Another student, referencing Robinson's discussion of President John F. Kennedy's leadership in putting a man on the moon, asked if she envisioned another individual playing a similar role in galvanizing action on the climate crisis.

"One 16-year-old has done more than anybody I can think of," Robinson said of Greta Thunberg, the Swedish teenager who has focused attention on the issue across the globe. She credited Thunberg with empowering young people to speak out — and go on strike on behalf of the climate — "without seeking anyone's permission."

Stressing the importance of intergenerational solidarity on the issue, she said she knows someone who is the head of a fossil fuel company — Robinson didn't name him — who has finally decided to do something about the damage his firm has caused.

The impetus? His teenage daughter, who, according to Robinson told him: "Daddy, you are responsible for destroying this world."