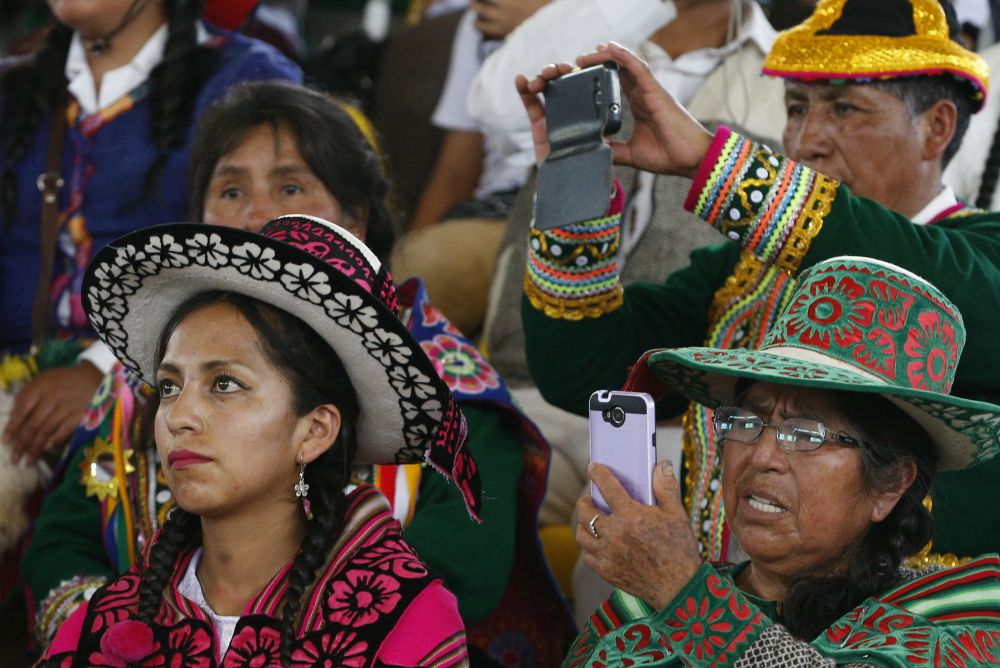 When the Amazon synod begins Sunday at the Vatican, it will mark a major milestone for the Pan-Amazon Ecclesial Network, also known by its Spanish-language acronym REPAM.

Both those concerns will be addressed by the synod, titled "Amazonia: New Paths for the Church and for an Integral Ecology." The gathering will bring the focus of the global Catholic Church to the Amazon rain forest following worldwide attention to recent wildfires burning through wide swaths of the region.

"The whole idea of REPAM as a network was to connect the different presences of the Catholic Church collaborating in a specific field of protection of human rights, indigenous peoples and a different approach into the territory of the Amazon Basin," Mauricio López Oropeza, REPAM executive secretary, told NCR. 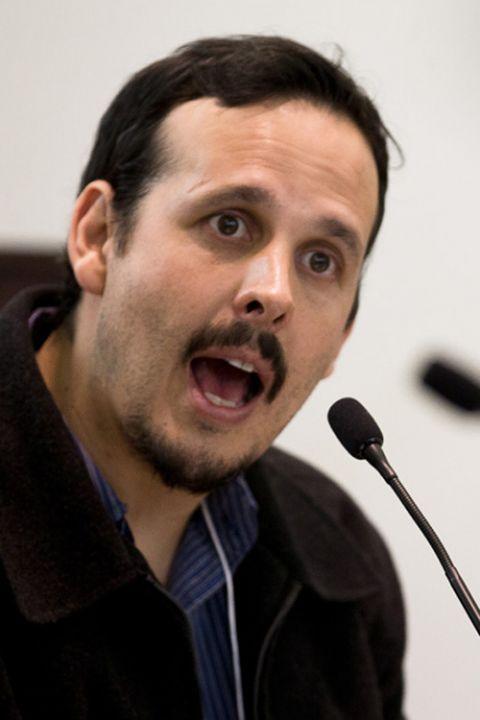 The three-week synod, the first to focus on a specific region, will bear plenty of REPAM's fingerprints.

Its president, Brazilian Cardinal Cláudio Hummes, will serve as relator general of the synod. Its vice president, Peruvian Cardinal Pedro Barreto Jimeno is one of three delegate presidents. López will be a non-voting participant, and was the only layperson on the 18-member synod preparatory council. And another half-dozen members will be engaged in the proceedings in some way.

REPAM officially formed in 2014, but the idea emerged several years earlier in Ecuador. There, numerous religious congregations were working in the Pacific-coast nation but "completely fragmented," López said. But many of the problems and challenges, from pollution to persecution of native people, were the same.

In April 2013, a month after Francis was elected pope, an international meeting was held in Ecuador of bishops, religious and episcopal congregations, indigenous leaders and Catholic development agencies all working within about six countries of the Amazon region. Eventually, they formed a commission, led in part by then-Bishop Barreto, to consider creating a full-fledged pan-Amazon organization.

Around that time, López recalled, they received a letter from the pope congratulating them on their new network.

"He had assumed that it was already moving on. And so we just decided to take his word for it, and we started it," he said. 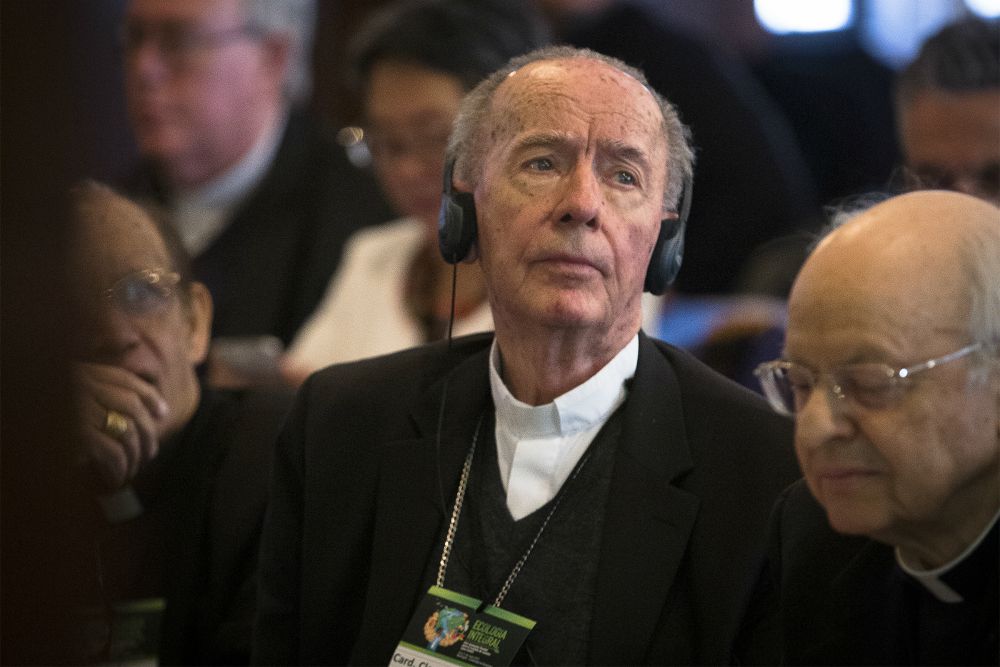 Brazilian Cardinal Claudio Hummes, president of the Pan-Amazonian Ecclesial Network, listens to a presentation in French during the Integral Ecology summit at Georgetown University in Washington March 19. (CNS/Tyler Orsburn)

When Francis in June 2015 published "Laudato Si', on Care of Our Common Home," his social encyclical on the environment and human ecology, REPAM viewed the document, and in particular its section on integral ecology, as confirmation of their work, López said. "And we made it our vision."

At the invitation of the Vatican's Dicastery for the Promotion of Integral Human Development, REPAM has since begun assisting the church set up similar networks in other important biomes of the world, including the Congo Basin in Africa and in Central America, Europe and Asia.

"I am pretty sure that Pope Francis feels that REPAM is a very relevant service toward reaching Laudato Si''s appeals for the whole church," López said.

Origins of the synod

Like REPAM, the idea for the Amazon synod predated its formation by several years.

López traces Francis' concern for the Amazon region back to 2007 at the fifth General Conference of the Bishops of Latin American and the Caribbean (CELAM) in Aparecida, Brazil. Then-Cardinal Jorge Mario Bergoglio of Buenos Aires, Argentina, was a lead writer of the final document.

The wide-ranging, 165-page document reflects on the rich biodiversity of Latin America, and in particular, the Amazon: "The traditional communities [of Latin America] have been practically excluded from decisions on the wealth of biodiversity and nature. Nature has been, and continues to be, assaulted. The land has been plundered. Water is being treated as though it were merchandise that could be traded by companies, and has been transformed into a good for which powerful nations compete. A major example of this situation is the Amazon."

"You could say that he had it [the synod] in his heart from 2007 in Aparecida," López said.

Shortly after Francis announced the synod in October 2017, Cardinal Lorenzo Baldisseri, secretary general of the Synod of Bishops, contacted REPAM asking they be collaborators in the preparation process. In response, REPAM invited Baldisseri to join the pope on his January 2018 trip to Puerto Maldonado, Peru — Francis' first papal visit to the Amazon region.

"If you want to really understand what this synod is about, you need to read and go back and listen to what the pope said in Puerto Maldonado," López told NCR.

In that speech, Francis said he "greatly looked forward to this meeting" and intentionally began his Peru visit by listening to the Amazonian people. He observed that they are more threatened on their land now than ever before, listing illegal mining, carbon emissions and threats to intentionally isolated communities, but also conservation efforts that force indigenous people from the ancestral lands.

"Thank you for being here and for helping us to see closer up, in your faces, the reflection of this land," Francis said. "It is a diverse face, one of infinite variety and enormous biological, cultural and spiritual richness. Those of us who do not live in these lands need your wisdom and knowledge to enable us to enter into, without destroying, the treasures that this region holds."

As Francis left for Lima, Baldisseri remained in Puerto Maldonado and that afternoon convened the first synod preparatory meetings. Discussions in that meeting, organized by REPAM, touched on themes for the synod and possible titles to be presented to Francis. 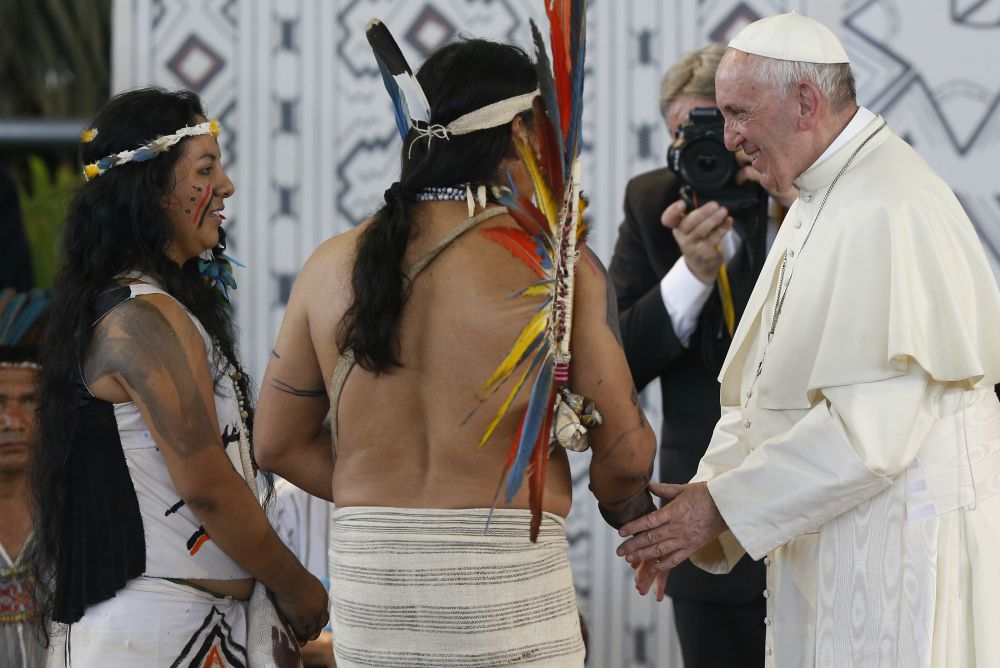 From there, REPAM's involvement grew.

A team of their experts worked with officials in the Vatican to construct the synod's preparatory document. But some of their greatest contributions came in the consultation process.

Said López: "We were asked to expand the listening process for the synod as much as we could in the territory with the people of God, and even with indigenous communities, organizations and other representatives of the territory. And so we did."

The information gleaned from the consultation process was reported back to the secretariat and used in shaping the synod's working document, known as the instrumentum laboris, with a REPAM team again working with Vatican officials to draft it. 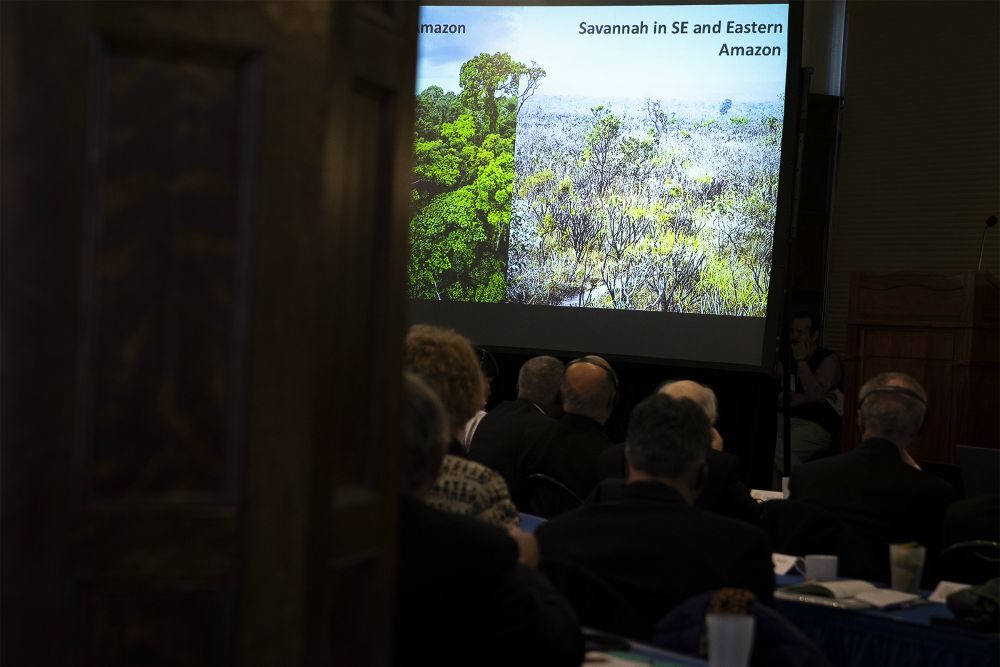 Participants listen to a presentation about indigenous cultures during the Integral Ecology summit at Georgetown University in Washington March 20. Much of the discussions at the event, co-hosted by the Pan-Amazon Ecclesial Network, or REPAM, kept in mind Pope Francis' 2015 encyclical "Laudato Si'." (CNS/Tyler Orsburn)

Ally of the Amazon

López told NCR it was critical that the synod "not to remain only in the Amazon," and that its global implications can only be understood "from the Laudato Si' perspective."

"If the Amazon does not survive … or it's entering into a process of becoming a desert, and if it continues like that it will be irreversible. Then the lack of water and what it produces and how it captures the carbon dioxide, this will have an impact for the whole planet, as we already see," he said.

From the consultation process, the REPAM executive secretary said that the Catholic Church is viewed as the institution with the greatest legitimacy in the Amazon territory, with Francis seen as a respected elder "speaking on their behalf, talking to the big powers of the world in terms of protection of their identity."

The synod, he said, will offer a chance for the full church to root itself as a prophetic ally of the Amazon. And with it, potentially form new ministries, specifically ones focused on integral ecology — what he sees as a pastoral "centerpiece" for the church everywhere.