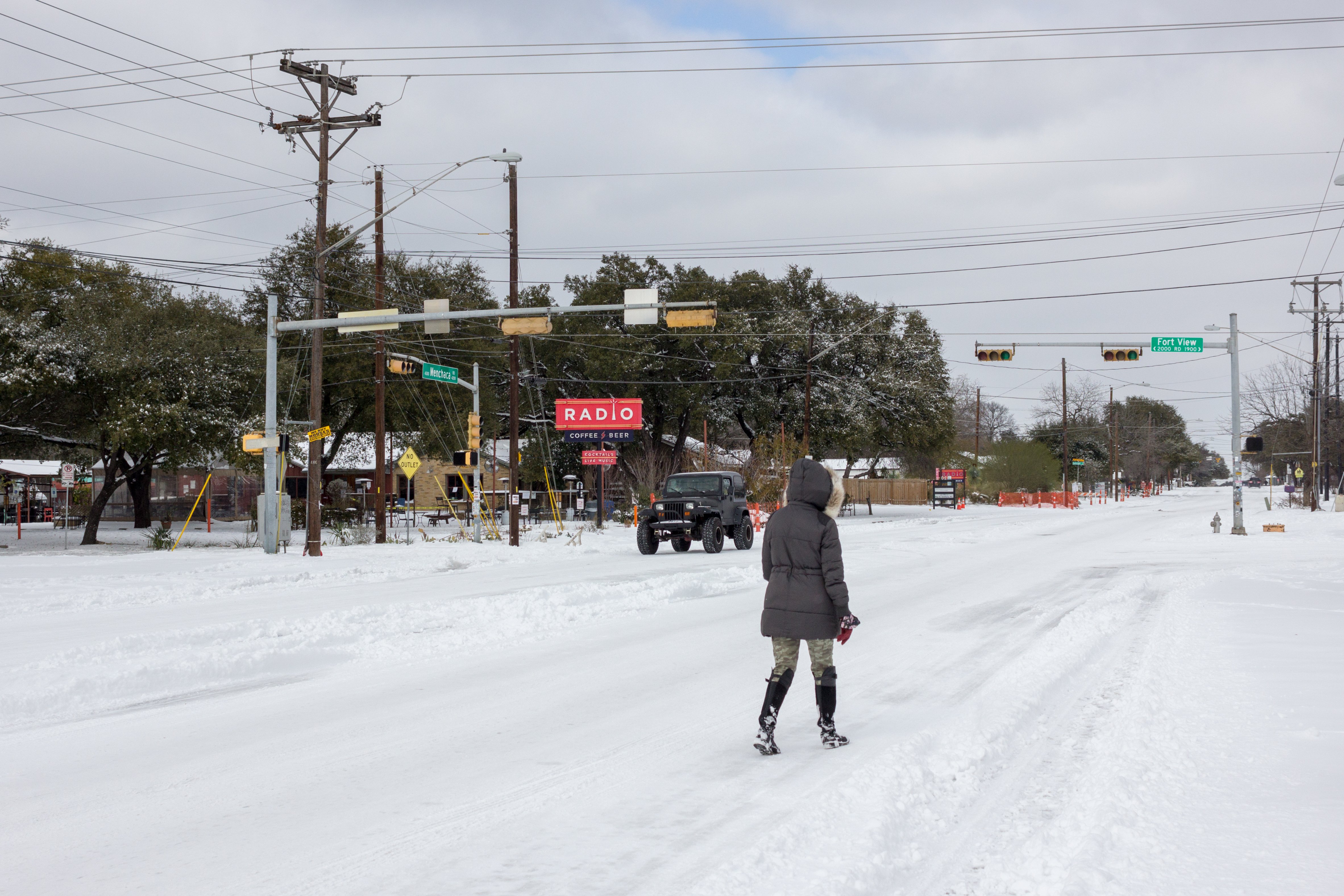 Stranded without power, a resident walks along a snow-covered road in Austin, Texas, Feb. 16, 2021. A failed attempt to provide "rotating blackouts" during Texas' historic winter storm left at least nearly 200,000 people without power in single-digits temperatures from the early hours of Feb. 14. (CNS/Isabelle Baldwin)

As families continue to suffer the effects of the winter storm that ravaged Texas and its energy grid two months ago, faith leaders across the state have vowed to hold lawmakers to pass legislation quickly to weatherize the power grid and provide financial relief for repairs.

"This was man-made — not the weather, but the response. Congregants, schools, homeowners, renters were all affected," said Jacqueline Hailey, a minister at New Hope Baptist Church, in Houston, during a press conference April 12. "This is still affecting us. We are not going to forget, and we want to ensure that this will never happen again."

The virtual press conference was organized by the Network of Texas IAF Organizations — a nonpartisan coalition of 10 primarily faith-based organizations across the state that represents more than 1 million people — and The Metropolitan Organization, a Houston-based civic group,  to keep public attention on the aftermath of the widespread power outages that occurred earlier this year.

The mid-February winter storm brought Arctic conditions that froze roads, residential pipes and a power infrastructure not equipped for such temperatures across much of the Lone Star State. Unlike the rest of the country, most of Texas relies on a state-based power grid, which makes importing energy from interconnected networks to the east and west difficult.

As energy use increased to fend off the historic cold, state power grid operators, fearing a major power failure, triggered rolling blackouts that cut electricity and water for millions of Texans, in some cases for weeks. More than 100 people died as a result of the storm and related power outages.

Despite the storm's devastating impacts, members of Texas IAF fear that local legislators are not responding quickly enough with solutions.

"One of the things I know as a Texan is we suffer amnesia very quickly," said Bill deHaas, a leader with Dallas Area Interfaith and parishioner at Holy Trinity Catholic Church. "This was a $200 billion problem, the largest crisis that has ever hit the state of Texas. … You would think some have completely forgotten it now."

Bob Fleming, a leader with The Metropolitan Organization, an affiliate of Texas IAF, added that the "almost relaxed response" to the disaster, including from Texas House Speaker Dade Phelan, has faith leaders worried, especially as their congregations continue to suffer in the aftermath. They had hoped that a plan to provide people relief would be up and running by now, but "no such luck," he said.

"We are trying to get legislators who are busy to concentrate on this matter — to understand the magnitude of the failure, not to minimize it, and to let them know we don't intend to forget," Fleming said. 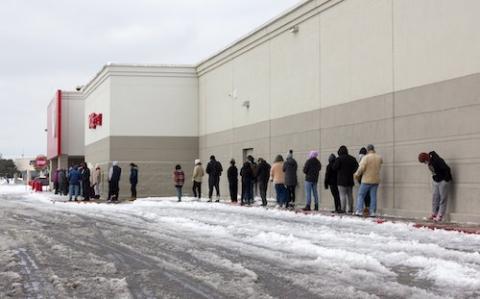 People wait in extremely cold temperatures outside a Target store in Austin, Texas, Feb. 16, 2021, as thousands neared the 48-hour mark of being without power. The South Austin location was the only Target open in the city. (CNS/Isabelle Baldwin)

To that end, faith leaders have met with state lawmakers and testified at hearings about the winter power outages.

They have called for the state legislature to mandate weatherization of the energy grid by all providers, with the costs covered by power producers and generators and through the state's $10 billion "rainy day" fund.

Faith organizations have also called for the establishment of a $2 billion fund to help families pay for home and apartment repairs, and for consumer advocates to be appointed to all state energy and utility boards. State economists have estimated the total cost of the storm could top $200 billion, or more than the combined cost of damages from hurricanes Harvey in 2017 and Ike in 2008, the state's previous most costly storms.

Texas IAF has thrown support behind Senate Bill 3, which would mandate weatherization under federal energy regulation guidelines. The bill passed on March 29 and now moves to the House. It would also impose penalties for noncompliance, increase coordination among state energy regulating bodies and create an emergency alert system.

The measure would also outlaw wholesale rate plans, in which the price per kilowatt-hour is determined by market prices and can rise sharply when demand is high, and require utility companies to offer at least one fixed-rate plan.

Faith leaders on the press call said additional legislation is needed to set up the $2 billion fund, as well as to reverse $16 billion in overcharges that residents faced. While the Texas Senate passed a bill in mid-March to reverse those charges, the House leadership has so far rejected those calls.

"Our families have already suffered enough," said the Rev. Minerva Camarena-Skeith of St. John's Episcopal Church in Austin. "They have paid more than their fair share of the cost for the mistakes of the energy industry and the unwillingness of the legislature to regulate the energy industry." 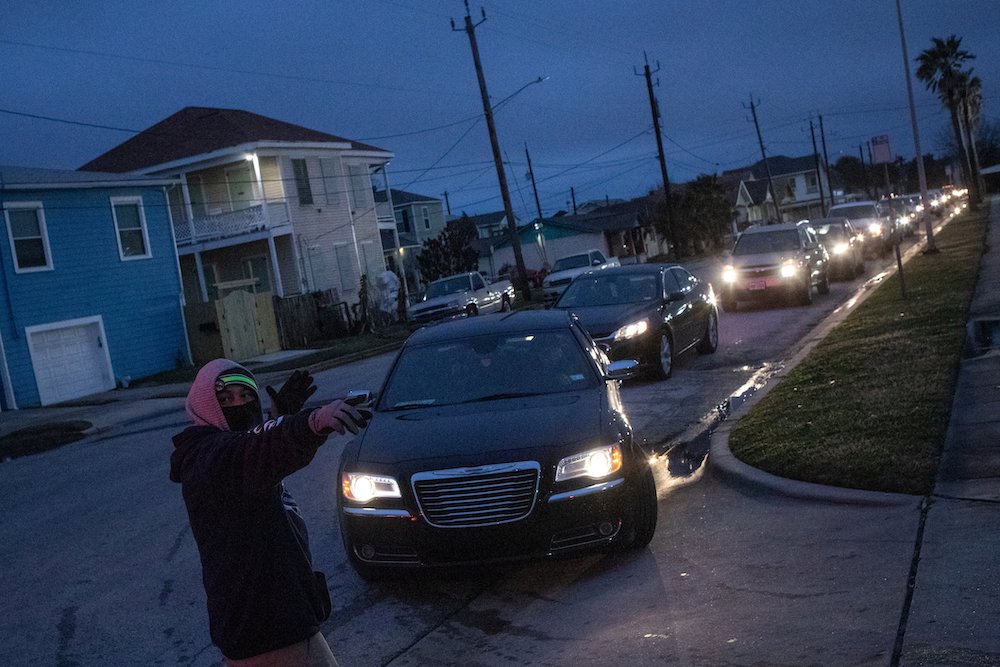 Residents of Galveston, Texas, line up in their vehicles to enter a shelter and warming center Feb. 17, 2021, after a loss of electricity throughout the region due to record-breaking winter temperatures. (CNS/Reuters/Adrees Latif)

State Rep. Jon Rosenthal, a former mechanical engineer in the oil and gas industry, joined the call to support Senate Bill 3. He added that he believed power companies and generators should at least partially fund weatherization efforts, calling it "a cost of doing business" common throughout the industry.

As legislation trudges through the legislature, the struggles continue across the state, members of The Metropolitan Organization said during the press conference. The budget strain of paying for repairs, they said, is especially felt by people living in apartments, whose landlords may not cover costs, as well as mobile home park residents and the elderly.

Many lost wages or jobs because of the coronavirus pandemic. Some are still running extension cords between homes and filling bathtubs with water, and she fears many could develop respiratory problems because of mold in their homes.

Cynthia Larkin, a parishioner at Our Mother of Mercy Catholic Church, in Houston, said her family lost electricity for three days and had no running water for three weeks after pipes in her home and garage froze and burst. As she waited for a plumber to obtain supplies, mold developed. Cleanup cost her $2,500 after her insurance company said it would not cover its removal.

Pipes also burst at the home of Sorina Serrano, who is still waiting for repairs. A leader with The Metropolitan Organization Houston and member of St. Leo the Great Catholic Church, Serrano said her home insurance coverage expired in March and other insurers have told her they won't cover the house until the repairs are made.

"What we've been through here in Texas is disaster after disaster. I have to have my home insurance," she said.

Added Hailey, "We do look like a disaster zone here. We do. And this is through our doing and not nature. It's not nature." 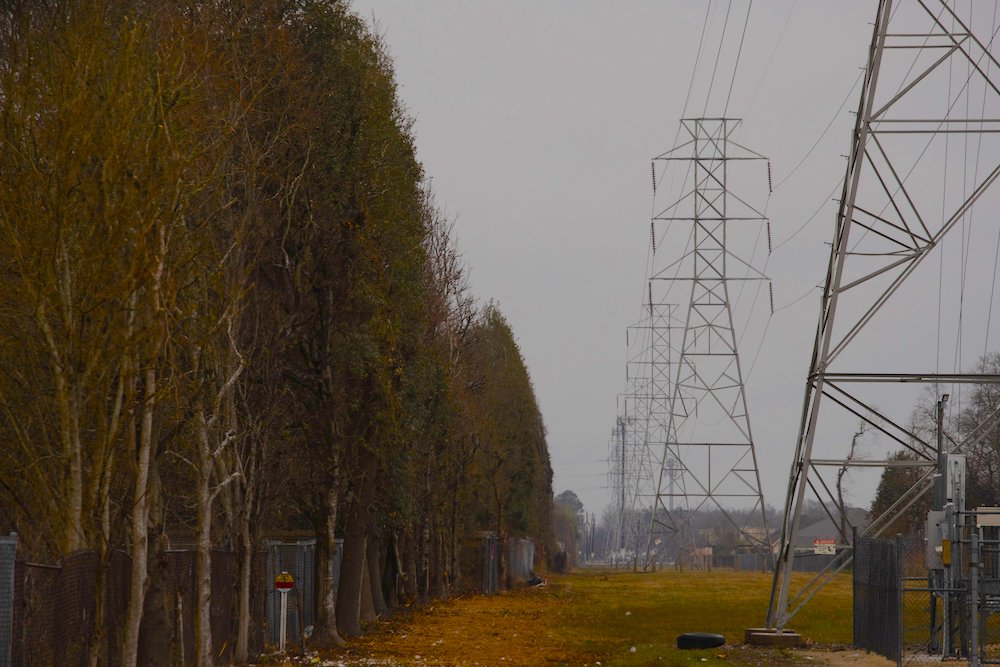