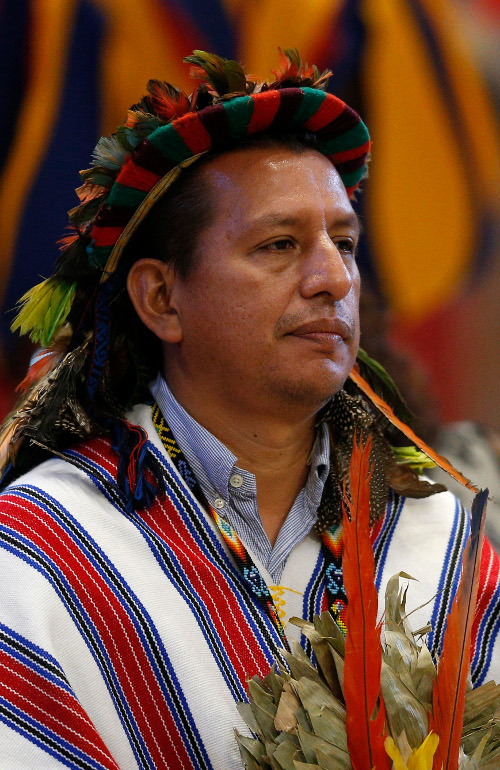 An indigenous man attends the concluding Mass of the Synod of Bishops for the Amazon celebrated by Pope Francis at the Vatican Oct. 27. (CNS/Paul Haring)

Governors from eight Amazonian states in Brazil and Peru meeting at the Vatican agreed that the Amazon is threatened and called for a "green economy" that would allow people to generate income without destroying the forest. 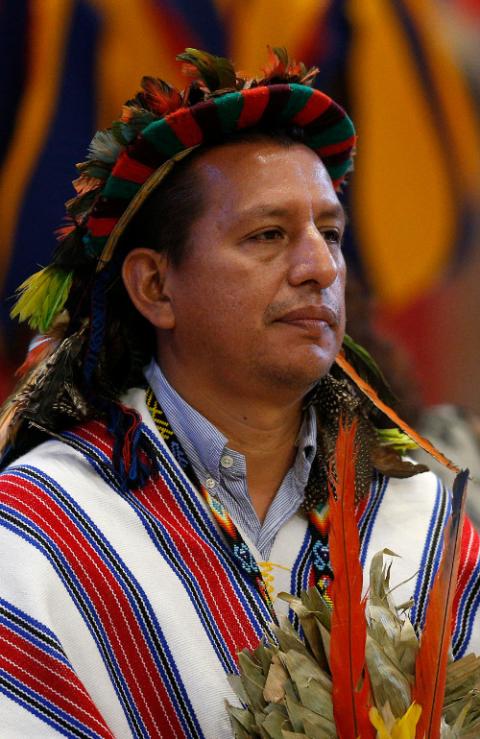 An indigenous man attends the concluding Mass of the Synod of Bishops for the Amazon celebrated by Pope Francis at the Vatican Oct. 27. (CNS/Paul Haring)

In a daylong meeting at the Pontifical Academy of Sciences Oct. 28, the governors made short presentations about steps they are taking toward sustainable development and problems they face. The meeting came a day after the end of the Synod of Bishops for the Amazon.

While the synod provided an assessment of the environmental, climatic, social, cultural and church-related situation in the Amazon basin, state governors are the ones responsible for seeking local solutions, Bishop Marcelo Sanchez Sorondo, chancellor of academy, told Catholic News Service.

In a declaration issued at the end of the meeting, the governors committed to "sustainable development of the Amazon based on a green economy, zero illegal deforestation, defense of the rights of indigenous people and traditional populations ... and the concept of integral ecology."

The governors called for a "new model of sustainable development based on giving value to environmental assets" and international support for strengthening an "Amazonian bioeconomy." Such ventures, they said, would be based on "productive chains of biodiversity, with technological innovation and valuing of traditional knowledge."

A bioeconomy involves the processing and sale of natural products other than timber — such as fruits, nuts, plant extracts and fibers — that generate an income without requiring the felling of trees.

When a similar proposal was made during the synod, critics warned that it could constitute a new form of colonialism if development projects were imposed without the consent of indigenous communities.

In remarks at the beginning of the governors' meeting, Brazilian Cardinal Claudio Hummes summarized key topics from the synod and said that indigenous people "must be subjects of history, not objects of development."

During the meeting, Thomas Lovejoy, the U.S. biologist who coined the term "biodiversity," told the governors that rainfall from the Amazon basin reaches all countries in South America except Chile.

Half of that rainfall is produced by evapotranspiration from trees, he said, so continued deforestation is expected to reduce precipitation. More frequent droughts in the past 15 years could indicate that this is already occurring, he said.

Lovejoy also urged the governors to address urban environmental issues, telling them there can be no sustainable future for the Amazon unless there is a decent, sustainable quality of life in the region's cities.

Governors are closer to the people than national government officials, who are generally in capitals far from the Amazon, and "are more likely to understand the challenges and benefits of sustainability," Lovejoy told CNS.

Because the Amazon basin affects weather patterns and climate beyond its boundaries, "what governors do and don't do can make a really big difference," he said.

The synod highlighted the "environmental crisis and its connection with the social crisis" in the region, Gov. Flavio Dino de Castro Costa of the Brazilian state of Maranhao told CNS.

"This demands practical and urgent solutions," said the governor, who met with a dozen bishops from his state when the synod ended. He added that the bishops' call for forms of development that do not destroy the forest and rivers was for Catholics and non-Catholics alike.

In their declaration, the governors said companies must monitor their supply chains to ensure that their products are socially and environmentally sustainable and to avoid "new forms of slavery."

They also called for international financing to compensate for what the synod called the "ecological debt" owed to the Amazon by industrialized countries.

Highlighting the "fundamental role" of science in promoting sustainable development, the governors also echoed a synod proposal for the creation of a scientific panel composed of Latin American experts and supported by the Pontifical Academy of Sciences and other international research bodies.

In seeking solutions for the region's problems, especially those related to climate change, "it is very important that the bishops, the bishops' conferences, the governors, politicians who work for justice and the common good, know what science says" about the issues, Sanchez Sorondo told CNS.