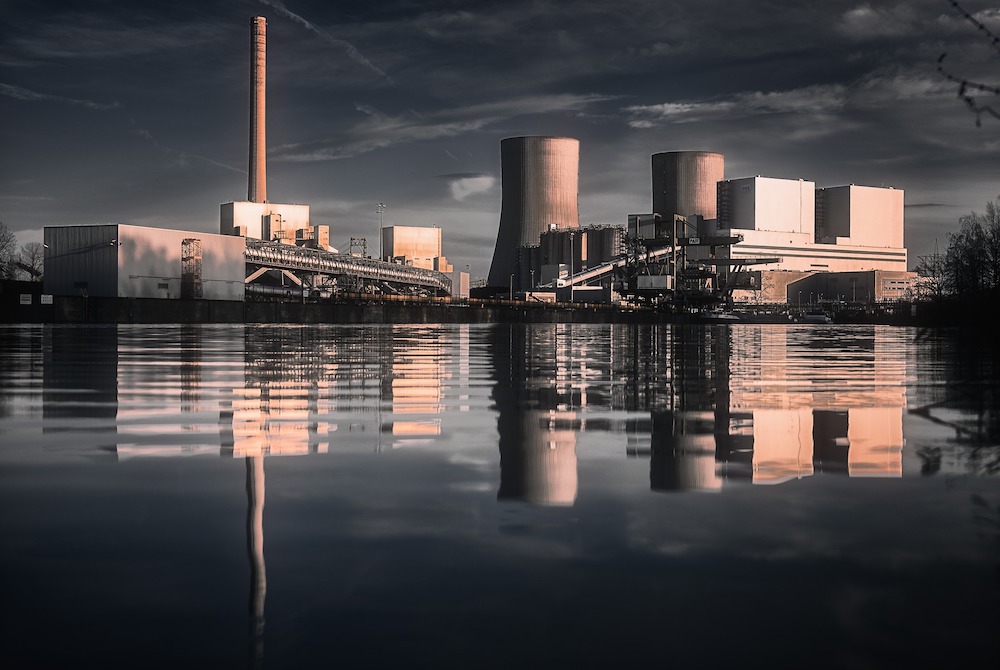 According to the U.S. Energy Information Administration, 60.3% of U.S. electricity is generated from fossil fuels, with coal being 19.3% Nuclear energy accounts for 19.7% and renewable sources — wind, hydropower, solar and biomass — 19.8%. Image: coal-fired power plant (Pixabay/Peter H.)

Catholic support for a price on carbon dioxide emissions was on display during a weekend climate change conference, where two bishops, an environmental leader and former Vatican ambassador touted it as a critical climate solution that is both effective and "eminently doable."

Bishops John Stowe of Lexington, Kentucky, and Robert McElroy of San Diego both backed the idea of a carbon tax on coal, oil and gas companies, which would be redistributed to Americans in the form of a dividend.

McElroy said it is the responsibility of people of faith to "raise the alarm" about climate change and demand real solutions from public officials.

"The carbon tax is a central element of that, because it's a way of ensuring, in an economically sound manner, that the carbon we put into the atmosphere is reduced in the years to come," he said.

Just as important, he added, "it's eminently doable."

Stowe called a price on carbon as "one very concrete and effective way of bringing action that will have an impact" and pledged to study the various initiatives and write his congressional representatives on the issue, encouraging other Catholics to do the same.

"[It is] a fair way of placing the burden on those who are responsible, as well as offering incentives for changes to a more green economy," he said.

Stowe, whose diocese covers eastern Kentucky's Appalachian region, criticized the "false promises and false excuses" of the "so-called war on coal," which he said presents people there "with the impossible choice between their own livelihood and the well-being and future of the planet."

"Clearly the choices don't seem fair," he said, adding, "Pope Francis would say why would you put the burden on the backs of the poor when the … resources that have been extracted from the land have benefited just a few of the wealthy?"

The comments came during an online conference May 15 held by Citizens Climate Lobby (CCL), a nonpartisan climate solutions advocacy organization that for years has pushed for Congress to put a price on carbon. Those efforts have led to outreach to a wide range of groups, including faith communities and Catholics. The conference, which had more than 700 people register, was its first aimed at a specific faith group, Jon Clark, CCL Appalachian regional coordinator, told EarthBeat.

Madeline Para, CCL president, said the organization's values, "to work from a place of love and respect rather than anger," mesh with Catholic principles. It has also sought bipartisan solutions and played a role in the formation of climate solutions caucuses in both chambers of Congress.

"Our goal is to reach the hearts and minds of our members of Congress, and it is good to draw strength from our faith as we do that," Para said, pointing out that roughly 30% of members of the 117th Congress are Catholic, as is President Joe Biden. "We think you can play a role in reaching their hearts and minds as fellow Catholics."

Citizens Climate Lobby has prioritized H.R. 2307, the Energy Innovation and Carbon Dividend Act of 2021, which was introduced in April. Previous versions of the bill have yet to advance far, but supporters hope its fortunes may change with a new Congress and with Biden in the White House.

The Biden administration has not stated a position on a carbon price or included it so far in its expansive climate proposals, while White House officials and Cabinet members have sent mixed messages.

Advocates of a carbon price see it as a simple and effective way to quickly reduce greenhouse gas emissions. The Carbon Dividend Act calls for an initial fee of $15 per metric ton of carbon emissions, which would increase by $10 annually. Citizens Climate Lobby members estimated that could cut U.S. carbon pollution in half by 2030 and place the country on track to net-zero emissions by 2050.

Critics of carbon taxes call them an indirect measure that undercuts the urgency of lowering emissions rapidly and say they disproportionately place the cost on poorer communities.

To hold global warming to 1.5 degrees Celsius, the Intergovernmental Panel on Climate Change, which supports a carbon price, has estimated that the price would have to be between $135 to $5,500 per metric ton by 2030, and even higher by 2100.

But proponents of the Carbon Dividend Act argue that 95% of low- and middle-income Americans would benefit or break even from the monthly redistribution payments, which they estimate at $16 to $24 per month in year one, and that the resulting emissions reduction would save 4.5 million lives over the next half-century.

Before the CCL conference, current or past iterations of the Carbon Dividend Act have garnered support from the U.S. Conference of Catholic Bishops, along with the Cincinnati Archdiocese, the Diocese of Fresno, California, three congregations of women religious and nearly a dozen Catholic universities. The Catholic Climate Covenant has also backed the bill and promoted it among its members.

Jose Aguto, Covenant associate director, told attendees he viewed a price on carbon not as a market-based solution, but "actually a prudent solution to care for our common home." He said the tax follows similar ones in place to fund solutions to "socially harmful activities," such as trash pickup, hazardous waste disposal and wastewater treatment.

Unlike other approaches, like fossil fuel divestment or a clean energy standard, Aguto said a carbon tax could be enacted quickly and would apply to a far larger portion of the U.S. fossil fuel sector — 80%, according to proponents. By taxing foreign imports, he said, it would spur similar taxes in other countries interested in collecting the revenue themselves.

"When we compare the solutions, a carbon price is a great cornerstone, in which to move forward on saving our common home," he said.

At the conclusion of a 2019 meeting with Francis at the Vatican, a group of 31 top energy and investment executives, including the CEOs of ExxonMobil, Royal Dutch Shell, BP and Chevron, signed a joint statement that encouraged governments to put a price on carbon "to significantly advance the energy transition while minimizing the costs to vulnerable communities and supporting economic growth."

"Carbon pricing is essential if humanity is to use the resources of creation wisely," Francis said in his address to the gathering.

"The failure to deal with carbon emissions has incurred a vast debt that will now have to be repaid with interest by those coming after us. Our use of the world's natural resources can only be considered ethical when the economic and social costs of using them are transparently recognized and are fully borne by those who incur them, rather than by other people or future generations," the pope said. 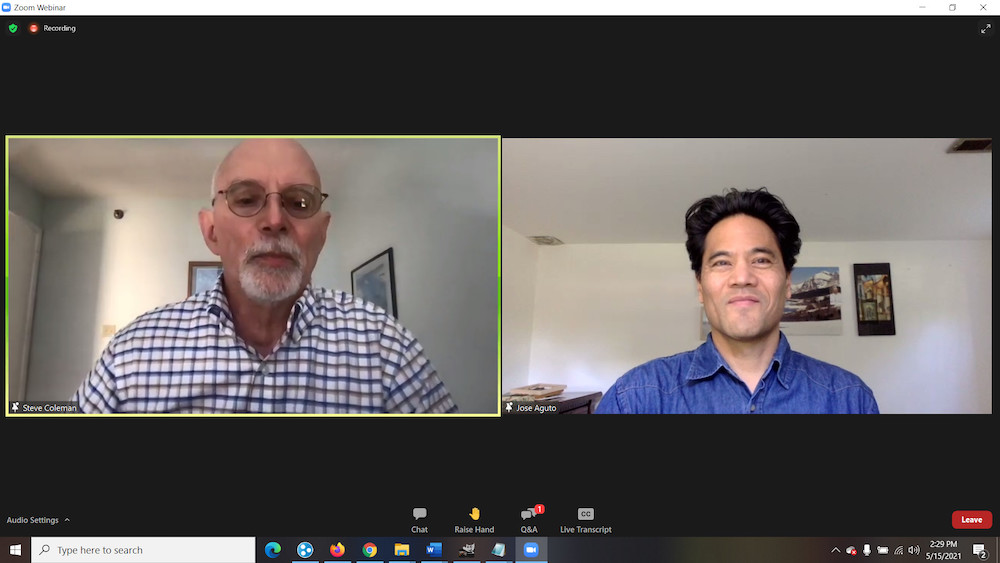 McElroy, in his video message, echoed Francis' encyclical "Laudato Si', on Care for Our Common Home," stressing that despite the ecological destruction facing the planet, people still have the ability to act. "It's not that we can't do anything to stop this; we can. We just aren't choosing to do so."

"There are smart ways to rescue the climate, and to stop climate change and to reverse it. But we have to act now, because the damage is building upon itself with every passing year," McElroy said.

Francis Rooney, a Vatican ambassador under President George W. Bush and a former Florida Republican congressman who co-sponsored one of the first carbon fee bills, praised Francis and Laudato Si' for putting science at the forefront along with the how global warming impacts the poor.

Rooney said his support for the environment is part of his overall pro-life advocacy: "You can't be pro-life in one way and not be pro-life in other ways. And the number of people who are going to have their life threatened in their environment, severely threatened by the radical climate change over the next 40 or 50 years, is quite disheartening."

Rooney said a carbon tax is "the most logical answer to pricing carbon and removing the most hostile fuels, like coal, from the marketplace." He added he was "very optimistic with President Biden's agenda" on environmental issues, particularly restoring regulations on energy production, offshore drilling, mercury and methane.

The former congressman added he believes various Republicans no longer deny climate science, "at least privately," but that they haven't shifted enough. Unlike past versions, the current Carbon Dividend Act has no Republican co-sponsor, even among members of the House Climate Solutions Caucus. 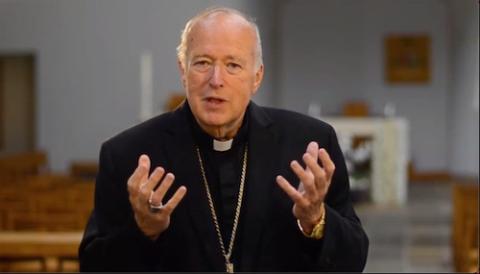 Bishop Robert McElroy: "It's not that we can't do anything to stop this; we can. We just aren't choosing to do so." (EarthBeat screenshot)

Rooney encouraged the conference participants to speak with Republican clubs in towns and on campuses, even if audiences may initially be unreceptive to the idea of a carbon tax. He said he is working with senators in energy-producing states, like Republican Lisa Murkowski of Alaska and Democrat Joe Manchin of West Virginia, to explore support for money from a carbon tax being used to retrain coal workers more quickly.

"Why not have the energy industry pay to retrain all these workers, instead of waiting 10 years and making the taxpayers do it? And Republicans like that," Rooney said.

Along with promoting carbon pricing legislation, the conference provided participants with training and resources for forming creation care teams, lobbying legislators and heads of universities and institutions, and starting conversations about climate change with groups not typically seen as concerned with climate change.

Asked how to reduce polarization in the church and country around social justice issues like climate change, Stowe suggested it is through the conversion that Pope Francis has championed. His Lexington Diocese is working on re-learning to dialogue and listen to one another.

Stowe said he is sorry to hear frequently from Catholics that their parish priests don't address climate change, and he and several other bishops have met resistance when they have urged the U.S. bishops' conference to put greater emphasis on the environment and other priorities of Francis.

"But it doesn't seem to get there. Unfortunately, I have to say that as a national church and the leadership of the national church, we're just as polarized as society in general. And that's a failure on the part of our teaching capacity," Stowe said. "This may be another one of those important places where the issue is going to rise up from the laity, even though it should be coming from the teachers."