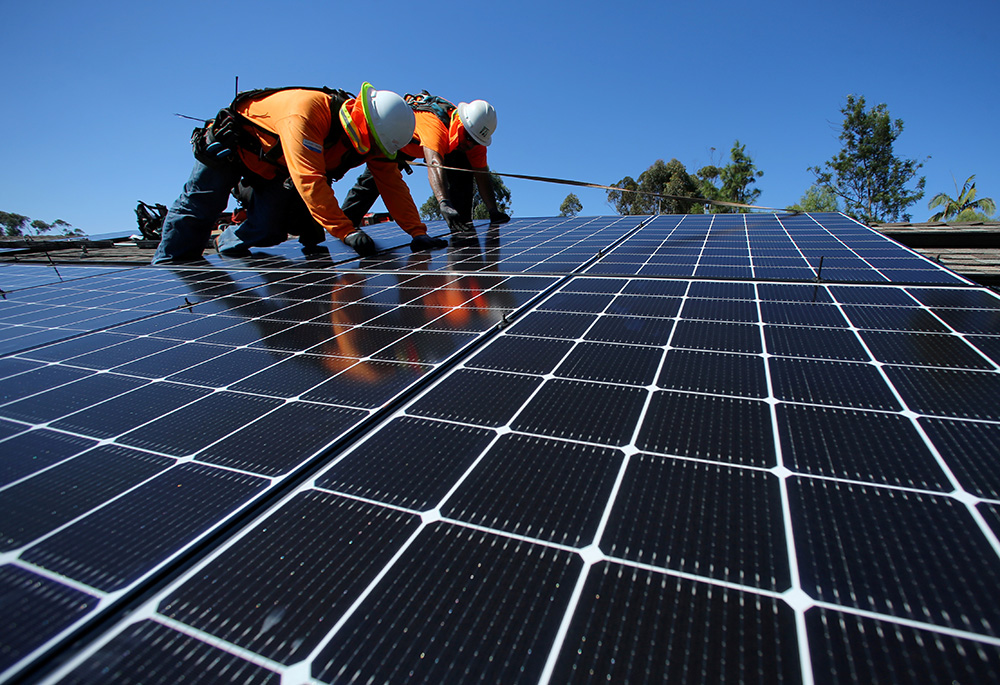 Nine days after Hurricane Fiona, a Category 1 storm, more than half a million homes and businesses in Puerto Rico were still without electricity, but many people across the rural municipality of Adjuntas never lost power thanks to local solar infrastructure.

After Casa Pueblo made headlines for maintaining power at its headquarters during Hurricane Maria in 2017, the community environmental organization installed solar power infrastructure throughout Adjuntas — at the firehouse, grocery stores, local businesses, medical facilities and more than 100 homes of residents with chronic medical conditions.

Arturo Massol-Deyá, the executive director of Casa Pueblo, said that he heard from community members who were able to continue their peritoneal dialysis during the middle of Hurricane Fiona because of Casa Pueblo's efforts.

Massol-Deyá, who is also a biology professor at the University of Puerto Rico in Mayagüez, and San Juan Archbishop Roberto González Nieves have both lent their support to the coalition Queremos Sol ("We want the sun"). González also mentioned the campaign in his pastoral letter on environmental action. 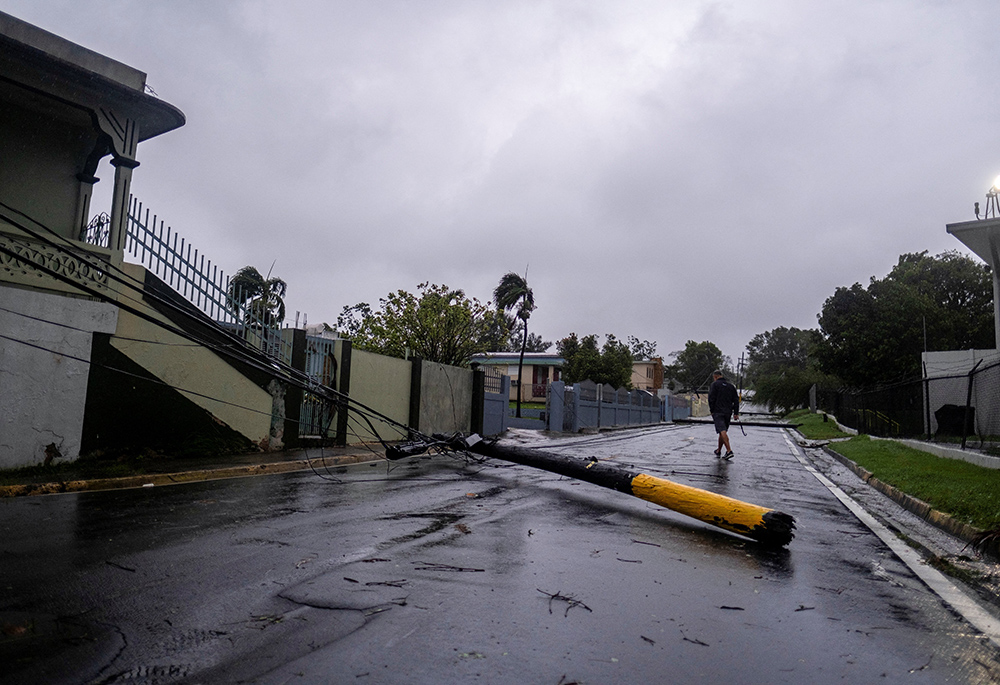 A man walks past an electricity pole that was damaged by Hurricane Fiona Sept. 18 in Yauco, Puerto Rico. The entire island was without power. (CNS/Reuters/Ricardo Arduengo)

Former Governor Ricardo Rosselló, who was later forced to resign after massive protests, announced plans to privatize Puerto Rico Electric Power Authority, the public electric utility, in early 2018 shortly after Hurricane Maria. The plan was also heavily supported by the Financial Oversight and Management Board, an unelected fiscal control board appointed by the president of the United States. Rosselló signed legislation to make the privatization go into effect in June 2018.

Austerity measures introduced before Hurricane Maria had already deprived the electricity system of necessary repairs and personnel, but after parts of Puerto Rico were without power for nearly a year after Hurricane Maria, "they used this excuse to privatize the electric system with the promise that it would be better in private hands, but what has happened with privatization is that the system is worse," said Massol-Deyá. 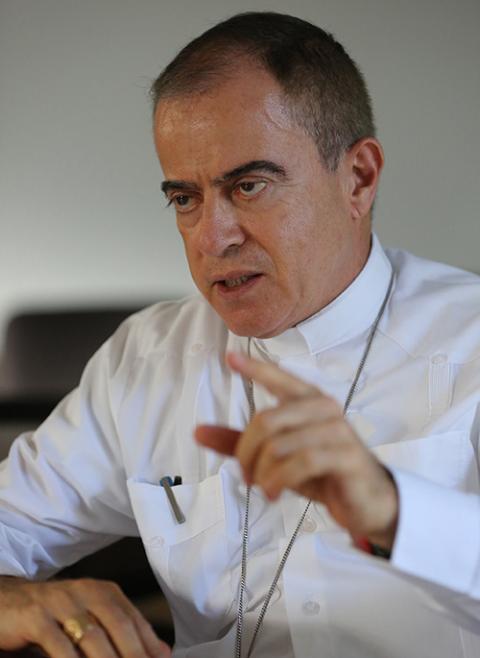 In the first year under Luma, there were seven monthly bill increases, bringing Puerto Rico's electric rate to more than twice the U.S. average. Luma officials claimed that there were 30% fewer power outages per customer this year, but the Puerto Rico Energy Bureau released a report in August saying that there was no change in the frequency and an overall increase in the duration of outages.

Queremos Sol has joined the chorus of "Fuera Luma" ("Get out Luma") coming from Puerto Rican protesters and celebrities. In one of the more creative anti-Luma protests dubbed "combative trash," activists piled household appliances ruined by the outages outside Luma offices across the island.

González called the protests "necessary," saying that "they give a sense of the suffering that people are experiencing." He highlighted that many people lose water when the power goes off. 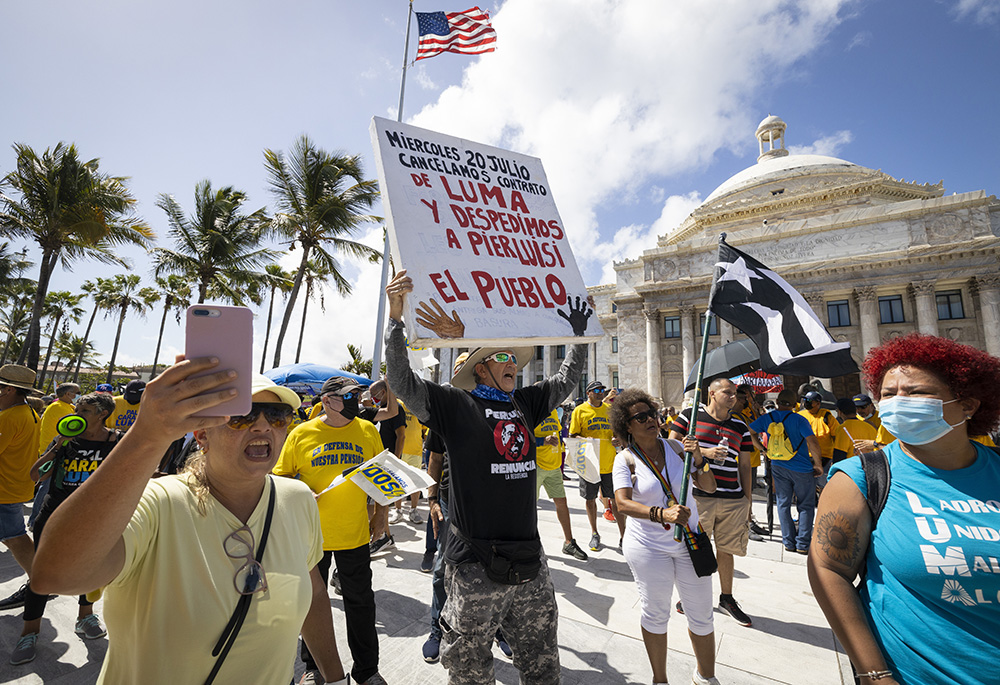 On Nov. 27, Fr. Pedro Rafael Ortíz, a diocesan priest from Caguas and spokesperson for the community organization Todos Somos Pueblo, gave the closing address at an anti-Luma protest outside the governor's mansion, according to a transcript he published online.

"This is not the end of the fight against LUMA and the dictatorial Oversight Board, which, we reiterate, are the ones who have to leave. As the popular song says: '¡Que se vayan ellos!' " Ortíz said, citing Puerto Rican superstar rapper and singer Bad Bunny.

Ortíz closed his speech with a blessing, saying, "Let us sow seeds of goodness and social justice to have a beautiful harvest of freedom."

Activists were rallying around the expiration of a temporary contract with Luma on Nov. 30, which was in place because a planned 15-year contract cannot go into effect until Puerto Rico Electric Power Authority's debt is restructured. With that restructuring scheduled to last at least until summer of 2023, the Public-Private Partnerships Authority voted Nov. 29 to extend the contract through June 2023 over the objections of Puerto Rican legislators.

Queremos Sol has been using the moment to agitate for a new governance model for the electric system and the creation of a new public energy company where board members are selected by various stakeholder groups instead of by the governor. Their proposal also includes an independent advisory committee made up of citizens that can participate in energy public policy.

Queremos Sol is not calling for the pre-Luma status quo. Puerto Rico has struggled with power problems for decades.

The electricity system is "from the last century," according to Massol-Deyá, and based around centralized thermoelectric power plants that burn fossil fuels and then distribute electricity across the island through transmission and distribution power lines. This system is vulnerable to earthquakes, hurricanes and fuel price increases because of global conflicts.

Massol-Deyá said that the system is also problematic because of its dependence on fossil fuels and contribution to climate change. Fossil fuels generate about 97% of Puerto Rico's electricity. "The Caribbean pays a higher share of the consequences of climate change," he said.

Queremos Sol is advocating to flip this system on its head by investing in decentralized rooftop solar panels and battery storage systems. 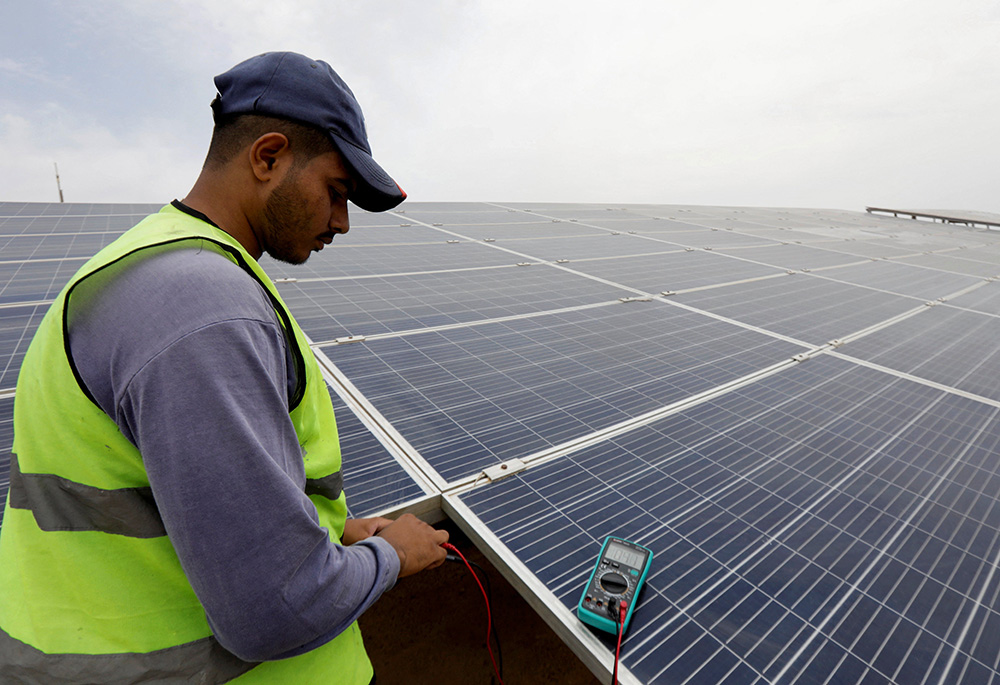 A worker checks solar cells on the rooftop of a hotel June 4 in Sharm el-Sheikh, Egypt. The hotel was working to turn to clean energy as the city prepared to host the COP27 summit Nov. 6-18. (CNS/Reuters/Mohamed Abd El Ghany)

Dominican Sr. Lissette A. Avilés-Ríos, who serves as the archbishop's delegate on ecological pastoring and as his liaison to Queremos Sol, said that the coalition is concerned that the Puerto Rico Energy Bureau has mostly approved solar farms so far.

Avilés-Ríos said centralized solar farms often consume valuable agricultural land on an island where food insecurity is common and the vast majority of food is imported.

Additionally, Queremos Sol has said rooftop solar will avoid the pitfalls of a centralized system that is vulnerable to hurricanes and where energy is lost as it is transmitted across distances. They have praised the lower cost of rooftop solar compared to solar farms and rooftop solar's ability to create local wealth and cooler buildings.

In his pastoral letter, González urged Puerto Rican churches and schools to switch to solar energy. "I'm asking each of the parish councils in all of the parishes to study ways in which their parish can make adjustments, changes to the electricity systems," he told Earthbeat.

Avilés-Ríos, who hosts a weekly radio show and podcast called "Cuidando La Creación" ("Caring for Creation"), said one of the biggest barriers for many parishes is the cost of solar panels. "There is a desire for us to move towards renewable energy," she said, "but we don't see it as attainable, right?" 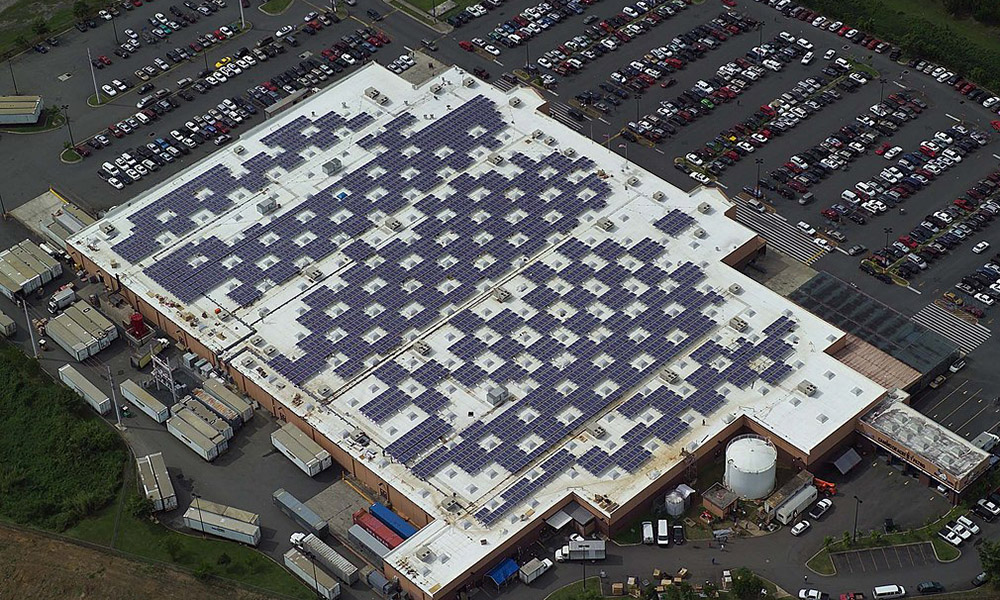 The Walmart Supercenter in Caguas, Puerto Rico, is one of five Walmart facilities on the island equipped with solar panels. (Wikimedia Commons/Walmart Corporate, CC BY 2.0)

She tries to emphasize that "it will be a bit expensive in the moment, but it will be much more affordable in the end."

Avilés-Ríos hopes to put parishes in dialogue with Solar United Neighbors, an organization that guides people through the logistics of going solar and helps cooperatives of 50 to 100 members get lower prices on solar panels through bulk purchasing.

González approaches the energy transition and his work spreading the Laudato Si' message with patience. "It's a process that will take time because it requires change of mentality," he said.

"We live in the culture of instant coffee, and, you know, things cannot just happen instantly. You cannot burn bridges, but you need to forge on one day at a time, one step at a time, and be persistent and not lose hope," González said.