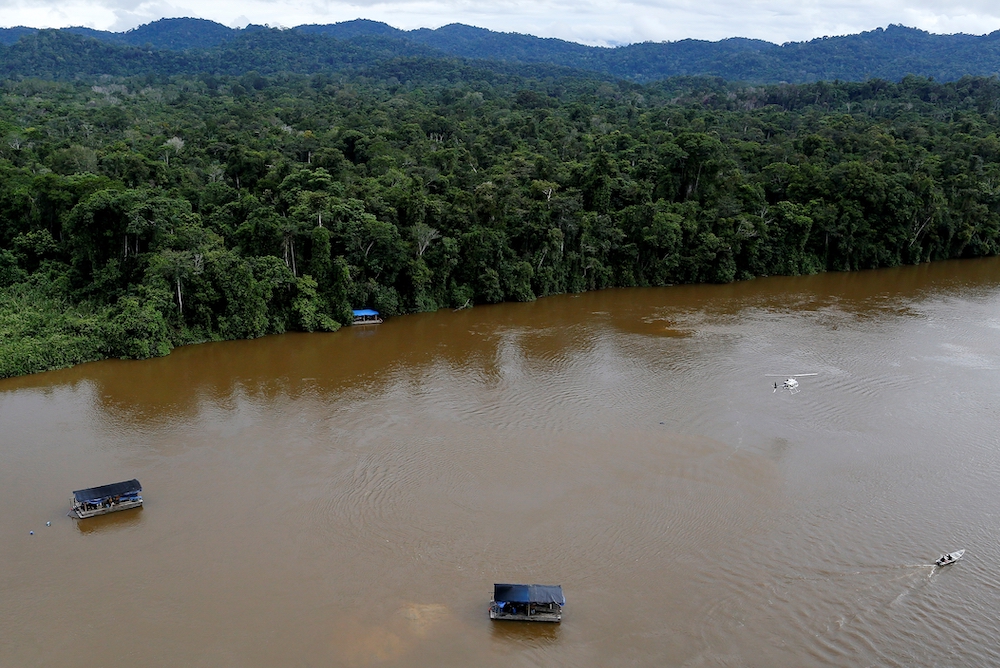 A gold dredge is seen at the banks of Uraricoera River during Brazil's environmental agency operation against illegal gold mining on indigenous land, in the heart of the Amazon rainforest, April 15, 2016. In an interreligious dialogue on Feb. 23 with Rabbi David Rosen and Imam Saffet Abid Catovic, Chicago Cardinal Blase Cupich said, "It is really up to us to challenge how so many believing people, faith-filled people, have bought into a libertarian notion of the world and the economy as something that we are to dominate for our own profit." (CNS/Reuters/Bruno Kelly)

As Catholics and other people of faith take measures to better safeguard the environment, they must be aware of the opposing tides they're up against, including libertarian strains within their own flocks, said Cardinal Blase Cupich during a recent webinar.

Cupich said that while Catholic and other religions' teachings make clear that caring for creation is central to the practice of the faith, there are many people of faith who "reinterpret the tradition in a way that is more in tune with a libertarian understanding of life and the economy." That worldview, he said, has limited some people from delving into the message of Pope Francis' 2015 encyclical on the environment, "Laudato Si', on Care for Our Common Home."

"The command in Genesis to go and make fruitful and multiply for some has been reduced to 'Go and dominate creation for your own good, for our own profit,' " Cupich said. "And I think that that is the real challenge that we as leaders of faith have with our people, because in fact there are people of faith who are not faithful to that tradition."

He continued, "It is really up to us to challenge how so many believing people, faith-filled people, have bought into a libertarian notion of the world and the economy as something that we are to dominate for our own profit," without considering the consequences "not just for the created order and material world, but also for how humanity is organized and how it contributes to human flourishing. So that is a real challenge for us."

The Chicago cardinal's comments came during an interreligious dialogue on Feb. 23 with Rabbi David Rosen and Imam Saffet Abid Catovic. The dialogue was the second in a series of interfaith conversations on ecological stewardship organized by the Catholic Association of Diocesan Ecumenical and Interreligious Officers, the U.S. Conference of Catholic Bishops and Catholic Climate Covenant.

Rosen, the international director of interreligious affairs for the American Jewish Committee, said that the widespread misinterpretation of Genesis 1:26 — where God gives humans dominion over the creatures of the earth — is at the heart of the libertarianism view of some people of faith.

He referred to Rabbi Abraham Isaac Kook, the first chief rabbi of Israel, who Rosen said spent extensive time in his writings trying to counter the idea that God gave humans "an unlimited mandate" to use creation for their benefit. For instance, Adam and Eve were restricted to vegetarian diets, and in Psalm 145, God's mercy extends to all creatures.

"He points out that what dominion obviously means is the responsibility we have as human beings created in the divine image to behave like benevolent sovereigns who behave responsibly to the rest of the cosmos, and not who exploit mercilessly, which would be totally not only to desecrate but to undermine precisely that divine charge," Rosen said.

Catovic, a longtime environmental activist who is senior Muslim adviser to GreenFaith, added that part of the problem with a lack of concern for creation is perception. Although people see houses of worship as sacred spaces, not all extend that view to the created world, nor do they see other creatures as fellow worshipers of God.

"These fellow creatures … each one has their mode of prayer and glorifying of the Lord. And when we decrease their numbers through human avarice and greed and oppression and tyranny on other creatures of this world, we are silencing the voices within our congregation, within our universal congregation," he said.

Cupich later added that religious leaders "have to realize that there is a certain amount of inertia out there that we have to overcome," from general resistance to the types of systemic changes in society that are needed to address climate change, to people's day-to-day concern with their own economic security.

"We surely can speak to them about these issues, being sensitive to their concerns. But we shouldn't be naive about the inertia that has to be overcome," Cupich said.

The event marked the latest critique of libertarianism by Cupich. In 2014, he was among the participants at the first "Erroneous Autonomy: The Catholic Case Against Libertarianism" event at the Catholic University of America. There, the cardinal said that Francis and libertarians offer "two compellingly different pathways for humanity at this moment in history."

The Feb. 23 online dialogue was part of a webinar series aiming to promote a Laudato Si' pastoral guidebook released in January on ways parishes can implement the pope's ecology encyclical and use it as a basis for interfaith connections. The next dialogue will take place on March 9.

Catovic said that Muslim leaders and scholars used the pope's encyclical as a basis for the Islamic Climate Change Declaration, which was also issued in 2015 ahead of the COP 21 United Nations climate summit, where the Paris Agreement was adopted. Similarly, Buddhists looked to the Muslim text in crafting their own climate declaration, which joined other religious environment statements ahead of COP 21.

"Without those documents and declarations and statements of faith, I don't think that the moral framework and the structure necessary for the political leaders to do what they were doing in Paris would have been achievable," Catovic said, adding that together they represented the first draft of "a common liturgy for planetary salvation."

Cupich said the connection that each of the Abrahamic traditions makes between faith and caring for creation is an element "that binds us together."

"It's in this goodness [of God's creation] that we're called to recognize not only the beauty of creation, but that we come together to oppose any actions that would bring harm to what God has made good," he said.

A version of this story appeared in the March 19-April 1, 2021 print issue under the headline: Cupich: Libertarian ideology hinders Laudato Si' adoption in the church.