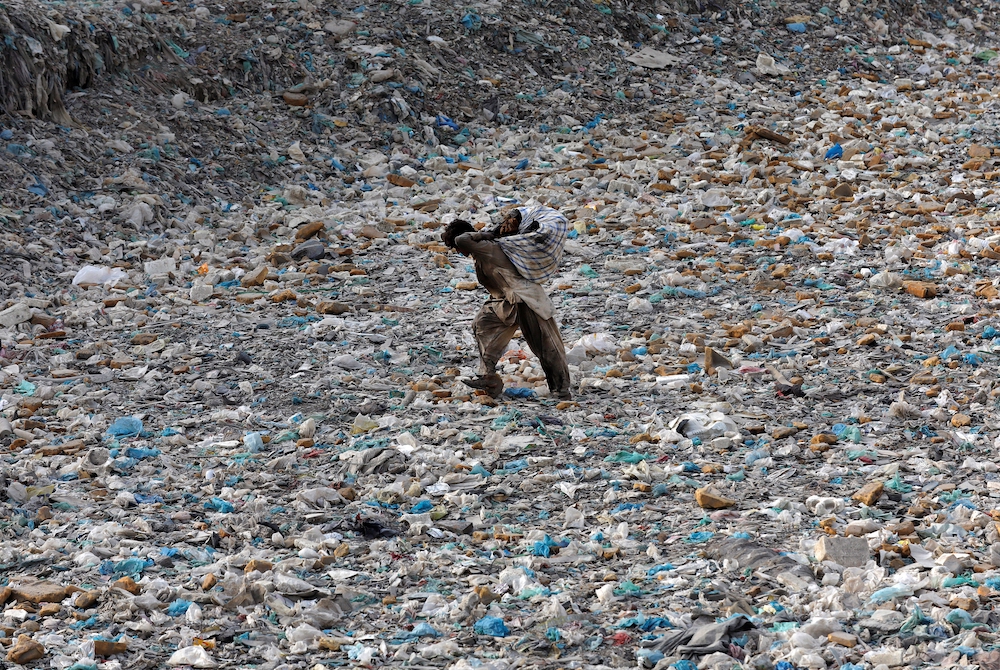 A boy carrying a sack of recyclables walks through trash in Karachi, Pakistan, June 4, 2020. (CNS/Reuters/Akhtar Soomro)

In the days leading up to Earth Day, several U.S. bishops took to church pulpits and Zoom rooms to call Catholics to do their part in ushering in the societal changes needed to counter climate change and other ecological calamities — and not just on days like Earth Day.

Three bishops over four days spoke out on the need for more than technology and policy to stunt rising global temperatures and slow destruction of ecosystems and species, saying there must be changes in lifestyles and even how living a good life is defined.

San Diego Bishop Robert McElroy, in a homily for a special Mass on April 17 to kick start Earth Week, invited those at the oceanside St. James-St. Leo Catholic Community in Solana Beach, California, to "stop and pause" to appreciate the "the beautiful, wondrous creation which lies all around us," but to also confront the perils facing it.

"We are called to come together and to witness and to sacrifice and to change the patterns of our world so that we do not destroy this precious heritage, but in fact build it up and leave it even more shining to the next generations than we inherited it," McElroy said.

That begins with the ecological conversion that Pope Francis championed in his encyclical "Laudato Si', on Care for Our Common Home," McElroy said. Such a conversion, he added, is not a one-time event but an enduring shift in how we live.

"It can't be just a series of steps we take that are disjointed. It can't be momentary. It can't be coming together once a year on Earth Day," McElroy said. "It is a way of life because it involves sacrifice. There's no way we can accomplish what needs to be done unless all of us sacrifice. And that is not easy."

He said changes in ways of living are especially needed for powerful nations, like the U.S., "not so our way of life won't be good anymore — it will still be wonderful. But it is going to require sacrifice and conversion of heart and understanding."

McElroy, who was one of two U.S. bishops who participated in the 2019 Synod for the Amazon at the Vatican, said the Indigenous leaders there spoke of the concept of "the good life." Where in the U.S. that is more likely defined by financial security and few pressures, for Indigenous peoples it means living in justice with other people, with creation and with God.

"That's the good life," the San Diego bishop said. "That's what Pope Francis is aiming us toward. And that must be the goal for all of us in our efforts to make sure that the gift that God has given to us is handed on not just intact, but better. And we can do this."

Next month, the Vatican is set to launch its Laudato Si' Action Platform, a global grassroots effort to galvanize wider portions of the Catholic Church to work toward sustainability in the mold outlined in his 2015 encyclical. The Catholic Climate Covenant is the point organization for the U.S. church.

Vatican officials have called the worldwide rebuilding effort from the coronavirus pandemic as the opportunity to reorient the globe toward a more just and sustainable future. Francis conveyed his own vision of what the world can be in his book Let Us Dream: The Path to a Better Future, written in collaboration with Austen Ivereigh.

Reflecting on the text during an April 15 webinar co-hosted by the Evangelical Environmental Network, Bishop John Stowe of Lexington, Kentucky, said the pope cautions against relying on purely technical solutions to environmental challenges.

"That seems to be our tendency right now: Let's find processes, let's find the policies, let's find the science that's going to help us to continue to consume all that we want and save the environment at the same time," Stowe said. "And he points out again and again how that eliminates the vast majority of the world's population who cannot live by our standards and can't consume, nor can the earth sustain those standards."

Stowe, who is a Conventual Franciscan, added that while a "we're all in this together" mentality took hold for a period during the pandemic, it has not persisted, and "we quickly fell back into our old divisions of haves and have-nots" and between those with and without power.

"We didn't learn the lesson of unity there," he added, noting that unity is a central theme in both Let Us Dream and Francis' most recent encyclical, Fratelli Tutti.

The Kentucky bishop said that Francis has warned divisions will persist if governments continue to be guided by profitability and technical solutions, rather than political charity and friendship. Stowe said for the U.S. that means ensuring all voices are heard, specifically calling out voter suppression efforts in numerous states.

A key lesson that Francis has sought to convey, Stowe said, is that the pandemic "could very well be the dress rehearsal for environmental catastrophe."

"If we don't learn from this situation that we all find ourselves in with the global pandemic, how to work together and how to conquer something that is affecting all of us, we're going to be in sad shape when we face even bigger disasters coming our way," Stowe said.

A day earlier, Bishop Edward Weisenburger of Tucson, Arizona, told high school students that "Pope Francis is not [just] one more environmentalist," but rather a religious leader "who realizes the ecological issues are profoundly religious issues."

"He's really asking us to renew our faith. Because in the end, he knows that men and women of faith love deeply and profoundly, and sacrificially will make the kind of choices that matter, not only for our brothers and sisters today but for future generations," he said.

The Arizona bishop said that in environmental terms, "we're in a crisis." And while science has highlighted the depth and seriousness of the ecological situation, it hasn't led to more people listening. Nor have frightening images on TV and online, the bishop added, suggesting that religion may have more power to motivate people to care about climate change.

"While we have to be informed by science and we have to look squarely at what's really happening in the world — we can't be blind or be in denial — nevertheless, we're going to respond to this crisis with good decisions that change the world when we're properly motivated," he said. "And [Pope Francis is] convinced, and I'm convinced, that's motivated by deeper belief in God, and our need to love one another, as we share a common home.