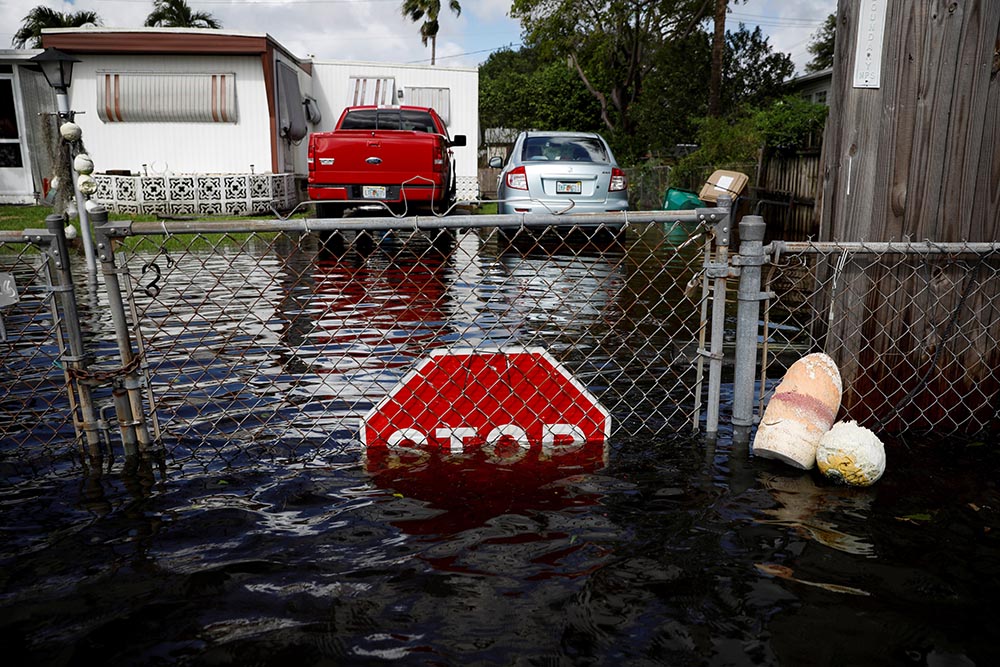 People who think the planet needs to be saved should "get down from the high horse of arrogance" and realize that in tackling global warming "we are helping ourselves, because that is the only way we'll remain viable as a species," a top United Nations official said at an event marking the fifth anniversary of Pope Francis' ecological encyclical.

Speaking March 26 at the online conference sponsored by St. John's University in New York City, Satya Tripathi, U.N. assistant secretary-general and head of the U.N. Environment Program's New York office, said that "Mother Nature will go on," regardless of what happens to humans.

At the same event, Cardinal Peter Turkson, prefect for the Vatican's Dicastery for Promoting Integral Human Development, warned that the signs of an emerging climate crisis are "on our doorsteps."

The conference was part of the yearlong celebration of the fifth anniversary of Francis' encyclical "Laudato Si', on Care for Our Common Home." It came less than a month before an international climate summit planned by President Joe Biden for Earth Day, April 22, and seven months before the next U.N. climate summit, COP26, scheduled for November in Glasgow, Scotland.

The cardinal said that in the five years since the encyclical's release, increased scientific evidence of a warming planet, signs of the sixth major species extinction, and increasing major weather-related disasters, including wildfires in California and stronger hurricanes in the Caribbean, reveal that "Mother Nature is calling to us."

That "wake-up call," the cardinal said, must lead people to recognize the role human activities have played in fueling climate change and destruction of ecosystems around the world, and to choose a new path that detours from the belief that human progress is tied to increased economic activity and power.

"Pope Francis wants to remind us that we are free, we have within us the power and capacity to turn this around, to turn the corner, to direct technology in such a way that they must preserve well-being of the Earth," Turkson said.

The cardinal called attention to Laudato Si' where Francis sought to correct the responsibility God gave to humanity in the Book of Genesis to till and keep the global garden. "The relationship of the human person toward creation is to till, but also to keep. And keeping enables the earth to always exercise its life-sustaining powers for every generation that comes," Turkson said.

That passage from the encyclical resonated with Tripathi, the U.N. official, who said, "That's what we have failed spectacularly, as the human race, is that we have tilled it to death, but we have kept nothing."

He said that while three decades of climate conferences have been dominated by discussions of how to reestablish that symbiotic balance, the November COP26 in Scotland must move beyond words.

"I sincerely hope we stop talking and start acting," Tripathi said, not just for the planet but for the sake of preserving human life.

The U.N. has dubbed the 2020s a decade of action, not only for sizable progress on climate change — scientists say emissions must be halved to place the planet on a pathway to 1.5 degrees Celsius of warming — but also the 17 Sustainable Development Goals.

But ideas and actions won't alone produce results, Tripathi said — it will also take money. He estimated that if the world's top 300 pension funds, which control an estimated $18 trillion, invested even 5% of that in environmental sustainability businesses, it would make a significant difference.

So far, global finance is going in the opposite direction. A report released in late March and funded by several environmental groups concluded that in the five years since the Paris Agreement was adopted, the world's 60 largest banks have invested $3.8 trillion in the fossil fuel industry. And while financing declined in 2020, during the pandemic, the $751 billion invested in the fossil fuel sector that year outpaced investments in 2016 and 2017, the first years after the Paris accord.

The leaders' climate summit that Biden will host in April is meant to deliver a bolt of energy ahead of the Glasgow COP. The U.S., which under Biden reentered the Paris Agreement in February, is expected to announce a new, more ambitious climate target.

Among the 40 leaders Biden has invited to the virtual gathering are the heads of top-emitting countries, past and present, including Chinese President Xi Jinping, Russian President Vladimir Putin, European Union President Ursula von der Leyen, President Jair Bolsonaro of Brazil, and Indian Prime Minister Narendra Modi, as well as the heads of numerous island nations most threatened by rising sea levels.

A month after the Biden climate summit, the Vatican plans to unveil its own efforts to catalyze action within the global Catholic Church. On May 24, the conclusion of the Laudato Si' anniversary year, the Dicastery for Promoting Integral Human Development will begin rolling out its multiyear Laudato Si' Action Platform.

The program seeks to mobilize a groundswell of Catholic institutions to achieve sustainability under the principles of Laudato Si' within seven-year time frames. Through the Vatican's COVID-19 commission, which includes an ecology task force, the dicastery is also working to build partnerships and strategies for new, sustainable models of development in a post-pandemic future.

Other parts of the St. John's conference highlighted some initiatives under way, including waste-management programs in India, a green building council in Italy that is restoring churches using sustainability criteria, and a Philadelphia architecture firm incorporating principles of integral ecology from Laudato Si' into its designs. The Vincentian-run St. John's itself has worked to integrate benchmarks from the Sustainable Development Goals into its own operations.

Turkson said that at COP21, the U.N. climate conference that produced the Paris Agreement in 2015, he witnessed finger-pointing from developing nations and the pushback from developed countries over responsibility for emission of planet-warming pollutants. The cardinal urged countries to move beyond historical disputes, prioritize equity and search for common solutions.

"We do not have time to do that," Turkson said. "The challenges before us and the crises are so imminent that it is time for all of us to just come together. In fact, that's what the Holy Father invites us all to do."

Tripathi added that while the Paris Agreement is widely lauded, that was partly because "nobody ever agreed on anything before." The accord's shortfalls include a lack of common standards or measures for countries to use in preparing their nationally determined climate targets, he said.

Although the agreement anticipated ratcheting up ambition over time, the initial goals would limit global temperature rise to 3.2 C by the end of the century — far short of the "well below" 2 C or 1.5 C goals in the text. Analyses of early secondary pledges indicated some improvement, holding temperature rise to 2.1 C if implemented.

Like Turkson, Tripathi called on countries to work together in the coming decade and to embrace equitable climate policies that require the world's historical emitters to do more.

"Let us be kind. That's what Christianity teaches us," Tripathi said. "Let us be compassionate to fellow beings, not just humans. Let us act. Because without that, we are all doomed."