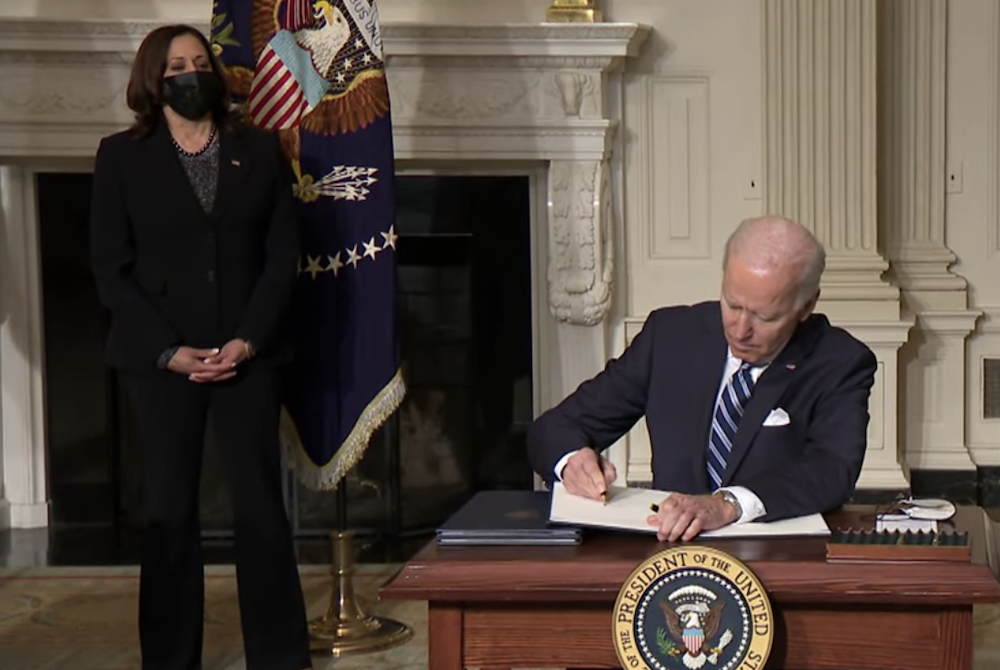 An executive order on "tackling the climate crisis at home and abroad," signed by Biden at the White House on Jan. 27, launched many of the policies he proposed during the campaign. It underscored the president's pledge that addressing the climate crisis will be central to his administration, and comes as the latest signal that he plans aggressive action despite potential roadblocks in Congress.

Biden also signed an executive order reestablishing the President's Council of Advisors on Science and Technology and a presidential memorandum directing federal agencies to base decisions on the best available science and data.

Faith groups joined others in the environmental movement in welcoming the executive actions as a sign the administration is committed to addressing climate change with the science and seriousness it requires, and in a way that doesn't leave marginalized groups on the peripheries.

"As people of faith, we are tasked with building a more just world — one that is in line with our moral values of justice, peace, and love for our neighbors and all of Creation. Today's executive actions show a commitment to bold solutions to the climate crisis, and to centering environmental justice in those solutions," said the Rev. Susan Hendershot, president of Interfaith Power & Light in a statement.

Stephen Schneck, executive director of Franciscan Action Network, commended the executive actions on what the president described as "the existential threat of climate change." He added they are "buoyed" by the administration linking the reduction of temperature-rising greenhouse gas emissions with the creation of jobs and technologies of a green economy.

"This is a moral issue for Franciscans and the Franciscan-hearted — as Pope Francis has reminded us in his encyclical, Laudato Si', and in many papal pronouncements. We are all called by the Creator to tend and steward the garden that is Creation," Schneck told EarthBeat in an email.

Biden's moves represent a sharp turn away from the approach to climate, and science in general, under the Trump administration, which rolled back more than 100 environmental regulations and wiped references to "climate" from federal websites and documents.

This is the second time Biden has signed orders on climate policy since taking office a week ago. On Inauguration Day, he began the process to rejoin the Paris Agreement and canceled the Keystone XL transnational pipeline.

At the signing event, Biden said the day — which the White House called "climate day" — was also jobs day and that the climate crisis offered an opportunity to transform the nation's economy. He added that the executive orders would "supercharge" the nation's response to climate change at a time when Americans increasingly witness the impact of global warming at home through record-setting wildfires and more destructive storms.

"There is a climate crisis. We must lead a global response" on both climate and the coronavirus pandemic, which cannot be solve by the U.S. alone, the nation's second Catholic president said, "We know what to do. We just got to do it."

Biden's new actions continue building toward his goal of achieving net-zero carbon emissions from the electricity grid by 2035 and nationwide carbon neutrality by 2050, while creating millions of high-paying union jobs in the process. 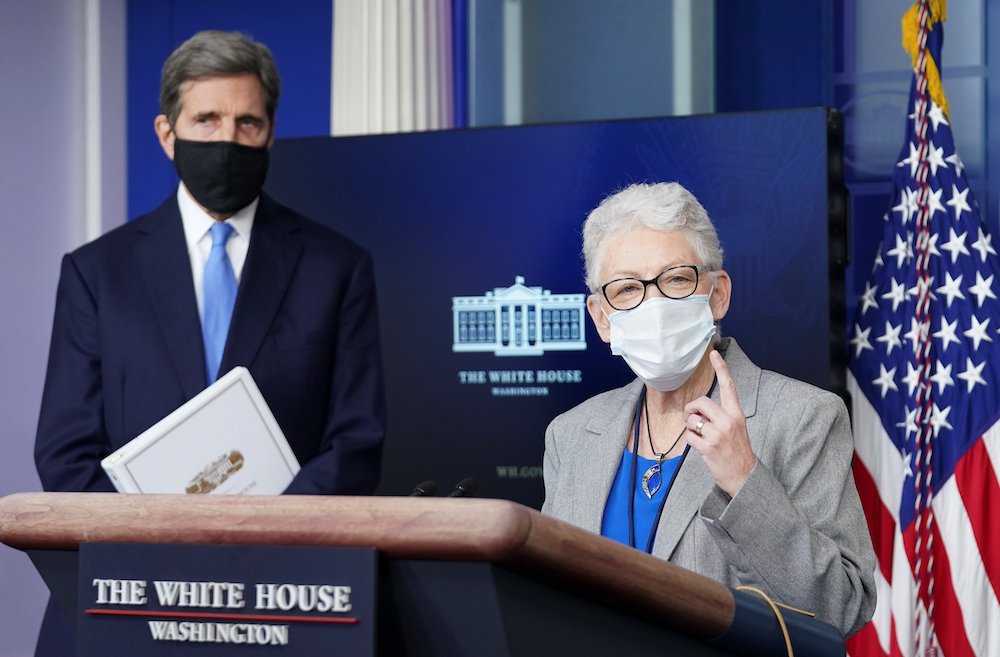 On Twitter, the Climate Justice Alliance called the steps "a much needed breath of fresh air." The coalition of frontline communities said how and what ultimately gets implemented will matter, and pressed for the government to involve such in developing climate justice plans.

One of the order's major moves directs the Interior Department to pause all new oil and natural gas leases offshore and on public lands and review all existing fossil fuel leases and permits in those areas. It comes just weeks after former President Donald Trump began auctioning leases in the Arctic National Wildlife Refuge, which Biden halted with a temporary moratorium. In his comments, the president said he would ask Congress to end subsidies for fossil fuel companies.

The order also directs the federal government to switch its fleet to U.S.-made electric vehicles and ensure that workers in clean-energy industries are paid prevailing wages and have the option to join a union. Biden also asked the Interior Department to take steps to double offshore wind energy production by 2030 and committed to the "30x30" goal of conserving at least 30% of the nation's land and oceans by 2030. As part of that, he established a Civilian Climate Corps Initiative to employ young Americans in conservation and restoration efforts.

On foreign policy, the executive order makes climate change an essential matter of national security. It sends the internationally negotiated Kigali Amendment on ozone-depleting hydrofluorocarbons to the Senate for approval. It also begins the process for the U.S. to develop a new commitment for reducing greenhouse gas emissions under the Paris Agreement, known as a nationally determined contribution, along with a climate finance plan. Nations are expected to submit new, more ambitious pledges ahead of the COP 26 U.N. climate summit later this year in Scotland.

John Kerry, the former secretary of state now serving as special envoy on climate, said the summit of world leaders is essential to ensuring that 2021 will be a year that makes up the time lost during the last four years under Trump. An aggressive domestic climate agenda will help restore U.S. credibility on the issue internationally, Kerry added, and also boost efforts abroad and "ensure climate action is global in scope and scale as well as national."

"We're going to take a whole-of-government approach," McCarthy said, adding that Biden "is continuing to move us forward at the breadth and pace that climate science demands."

Along with advisory councils on environmental justice, the executive order also creates a process for consultation with groups such as farmers, landowners, tribes, fishermen and communities economically reliant on the fossil fuel industry.

"We're never going to forget the men and women who dug the coal and built the nation. We're going to do right by them," Biden said at the signing ceremony.

Dayenu, a Jewish climate action group, celebrated the alignment of the White House "climate day" with the Jewish holiday of Tu BiShvat, or the "New Year for Trees."

A number of faith groups, including GreenFaith and the Minnesota chapter of Interfaith Power & Light, urged the Biden administration to take steps to halt the Enbridge Line 3 oil pipeline.

Kat Kramer, climate policy lead for U.K.-based Christian Aid, said in a statement that it was good to see the president "has hit the ground running on climate." She said the U.S. must help the countries most vulnerable to global warming adapt to its impacts.

The youth-led Sunrise Movement said the president's actions symbolize "a turning point in this country's climate politics and our nation's history." It highlighted how a number of the steps reflect aspects of the Green New Deal, even as Biden has sought to distance his own climate agenda from it.

Sunrise Executive Director Varshini Prakash urged Biden to press for "transformative" climate legislation, and if necessary, support abolishing the filibuster in the Senate to pass it.