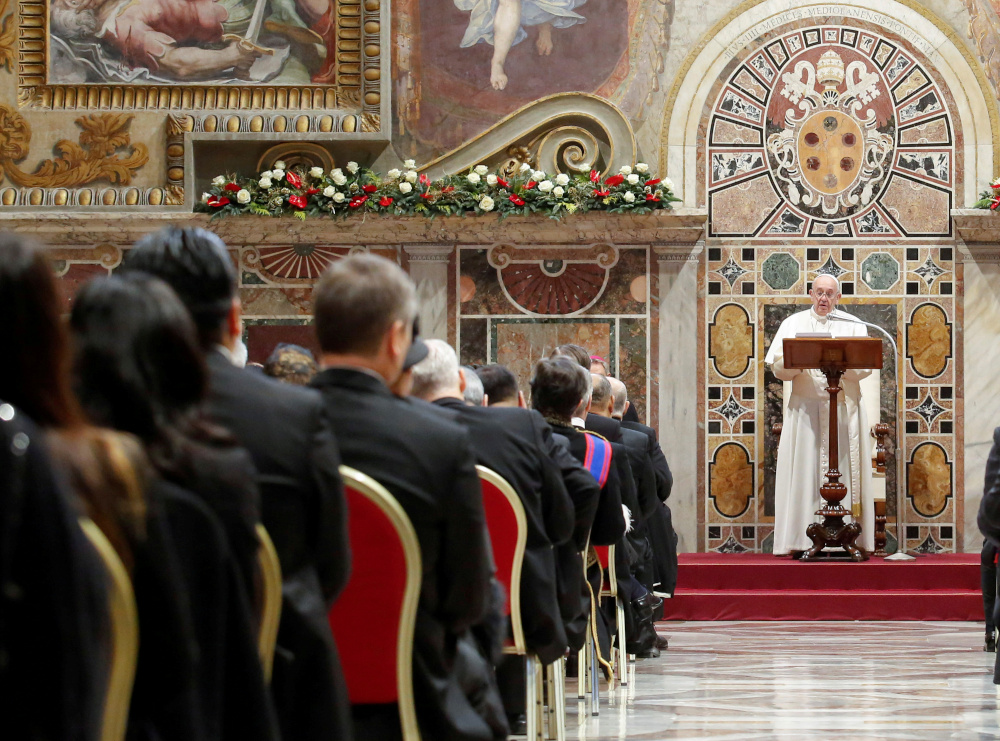 Pope Francis addresses diplomats accredited to the Holy See during an audience for the traditional exchange of new year's greetings in the Sala Regia at the Vatican Jan 9, 2020. (CNS photo/Remo Casilli, Reuters pool)

Pope Francis Jan. 9 strongly criticized the response of the world's governments to the catastrophic effects of climate change, calling their efforts in an annual address to the Vatican's diplomatic corps "very weak" and "a source of grave concern."

The pontiff also told the some 180 ambassadors accredited to the Holy See that the lack of progress during the last round of global climate talks, held in Madrid in December, "raises serious concern about the will of the international community to confront global warming with wisdom and effectiveness."

Speaking as an unprecedented number of wildfires are burning over tens of thousands of square miles in Australia, the pope instead praised the role of young people in calling attention to the ecological crisis, in an apparent nod to the movement sparked by teenage Swedish activist Greta Thunberg.

"The protection of the home given to us by the Creator cannot be neglected," said Francis. "Young people are telling us that this cannot be the case, for at every level we are being urgently challenged to protect our common home."

The younger generation, said the pontiff, "reminds us of the urgent need for an ecological conversion."

"Sadly, the urgency of this ecological conversion seems not to have been grasped by international politics, where the response to the problems raised by global issues such as climate change remains very weak and a source of grave concern," he said.

Francis was speaking Jan. 9 in an annual event in which he gives what is often called his "State of the World" address, which is closely parsed by the Vatican diplomatic corps in their reports back to their national capitals for any hints of particular issues of concern to the pope or others at the top of the church's hierarchy.

The pope calling an issue a "grave concern" would normally be seen as him sending a signal to world leaders that the matter is among the church's very highest priorities.

Francis, who has focused at length on environmental issues and dedicated his 2015 encyclical Laudato Si to the matter, had not previously commented on the results of December's U.N. Framework Convention on Climate Change.

Known by the acronym COP25, the summit ended with no overall consensus among world leaders on a proposed global carbon trading system. The leaders promised to return to the issue at the next summit, to be held in Glasgow in November.

Like in past years, the pontiff's 48-minute speech in the Vatican's 16th-century Sala Regia focused on a wide range of issues and conflicts across the world. This year, however, Francis approached his discourse as something of a travelogue -- reviewing the eleven countries he visited on his seven trips abroad in 2019, and then commenting on issues touching those regions.

Besides climate change, the pontiff reserved his strongest words for: the clergy sexual abuse crisis; what he called the "proliferation of political crises" across Latin America; the conflicts in Syria and Yemen; the treatment of global migrants; countries' continued possession of nuclear weapons; and the need for reform of the United Nations.

The pope also reiterated the call he made earlier in the week for the de-escalation of tensions between the United States and Iran, saying the situation following the U.S. drone strike that killed Iranian General Qasem Soleimani had "set the groundwork for a vaster conflict that all of us would want to avert."

"I therefore renew my appeal that all the interested parties avoid an escalation of the conflict and 'keep alive the flame of dialogue and self-restraint,' in full respect of international law," he said.

On other issues in the Middle East, Francis warned about a "pall of silence" falling over the Syrian Civil War, where ongoing battles between forces loyal to President Bashar al-Assad and opposition forces have led to hundreds of thousands of casualties.

The pope likewise called attention to the civil war in Yemen, which he said is "experiencing one of the most serious humanitarian crises of recent history amid general indifference on the part of the international community."

The pontiff thanked regional governments who have welcomed refugees fleeing both conflicts, mentioning in particular Jordan and Lebanon, who he said had done so "not without significant sacrifice."

Speaking about migrants and refugees in more general terms, Francis said "many thousands of persons in our world present legitimate requests for asylum, and have verifiable humanitarian needs and a need for protection that are not adequately identified."

"Many are risking their lives in perilous journeys by land and above all by sea," he said. "It is increasingly urgent that all states accept responsibility for finding lasting solutions."

On nuclear disarmament, Francis mentioned that during his visit to Japan in November 2019 he had visited with survivors of the U.S. atomic bombings of Hiroshima and Nagasaki.

"It became clear to me that true peace cannot be built on the threat of a possible total annihilation of humanity by nuclear weapons," said the pope. "The time has come for political leaders to realize that a safer world comes about not by the deterrent possession of powerful means of mass destruction."

The pope ended his speech by noting that 2020 marks the 75th anniversary of the founding of the United Nations at the end of the Second World War. He called for reform of the UN system, saying it should be made "more effective, taking into due account the present geopolitical context."

A version of this story appeared in the Jan 24-Feb 6, 2020 print issue under the headline: Francis criticizes world's 'very weak' response to climate change in address to diplomats.