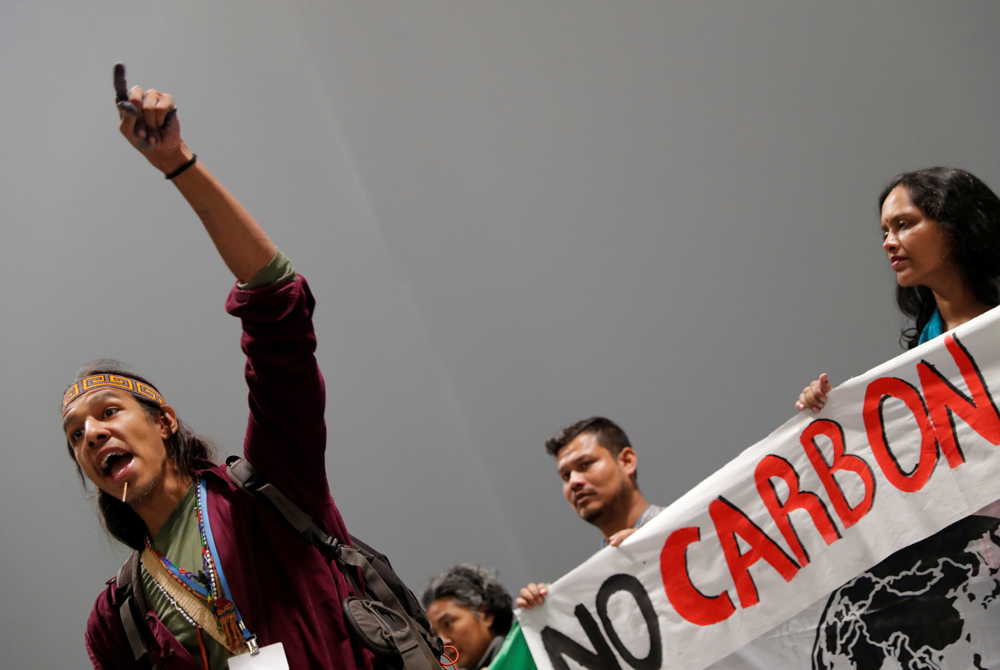 An activist gestures during a protest at the venue of the United Nations climate conference (COP 25)Dec. 5 in Madrid. (CNS/Susana Vera, Reuters)

What was billed as a launchpad ended up passing the buck.

The COP 25 United Nations climate change conference concluded Dec. 15 with little progress to show from 14 days of negotiations in Madrid. The talks, spilling into two extra days, making it the longest conference since they began 25 years ago, did not produce a desired increase of ambition from the world's major polluters, nor did diplomats reach consensus on the last, critical sticking points to implement the Paris Agreement.

The stalled progress in Madrid, serving as host after both Chile and Brazil backed out of holding the U.N. climate summit, elevates the importance of 2020 — a year when countries are expected to submit revised, and more ambitious, national climate plans in an effort to close the gulf between the planet's current warming trajectory (3 to 4 degrees Celsius by the end of the century, compared to pre-industrial times) and the goals under the Paris Agreement to hold warming to "well below" 2 C while striving toward 1.5 C.

The start of the next decade was already set to include major milestones in the fifth anniversaries of both the Paris Agreement and Pope Francis' encyclical "Laudato Si'" as well as the 50th celebration of Earth Day.

Twice during the proceedings in Madrid, Francis issued statements on the urgency that climate change poses to the planet, first calling on leaders to find "a clear, far-sighted and strong political will" to refocus global finances toward safeguarding the environment. Later, in his message for the 2020 World Day of Peace, marked on Jan. 1, he called the world to "an ecological conversion."

The Vatican sent a 60-member delegation to Madrid, led by Archbishop Bernardito Auza, the papal nuncio to Spain and previously the Holy See's permanent observer at the U.N. in New York.

Catholic organizations at COP 25 were disappointed by the lackluster outcomes, and especially the disconnect between the urgency shown by science and called for by millions in demonstrations throughout the year — including several within the conference hall — and the talk among governments. 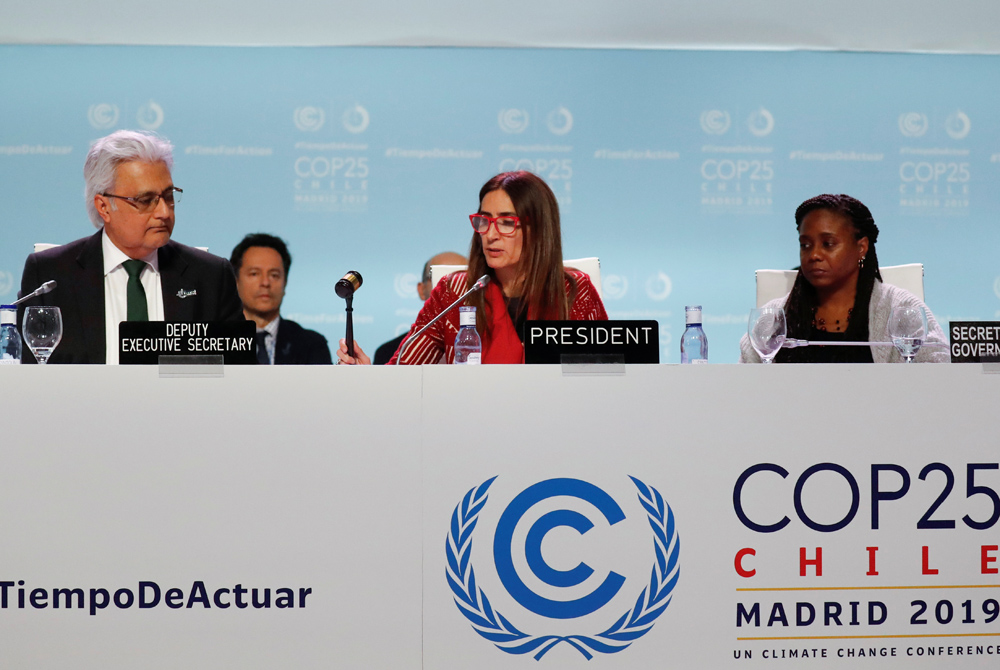 "It's unbelievable when we’ve seen people worldwide calling urgently, loudly and ever more desperately for action that the negotiators at the COP in Madrid have responded so meekly," Neil Thorns, advocacy director for CAFOD, the Catholic development agency of the United Kingdom, said in a statement.

"These conferences feel like a million miles away from the reality of those families in Zimbabwe facing the worst drought in 40 years and having to deal with their crops failing and the impact that will have on their families," he said.

CIDSE, a network of 18 Catholic development organizations, said in a statement Dec. 17 it entered COP 25 with "high hopes" for strong decisions. Instead, it said the summit fell short in shoring up human rights protections, securing financing for climate adaptation, and the overall lack of ambition by countries to enhance their national climate action plans.

"It is time for the richer nations to put their money where their mouth is and help the poorest adapt to climate change, while addressing present and future loss and damage, and promote agriculture that helps all to live gently on the earth," CIDSE said.

In a statement Dec. 15 on Twitter, U.N. Secretary-General António Guterres said, "I am disappointed with the results of #COP25. The international community lost an important opportunity to show increased ambition on mitigation, adaptation & finance to tackle the climate crisis."

Still, he expressed determination "to work for 2020 to be the year in which all countries commit to do what science tells us is necessary" to achieve carbon neutrality by mid-century and hold temperature rise to 1.5 C. 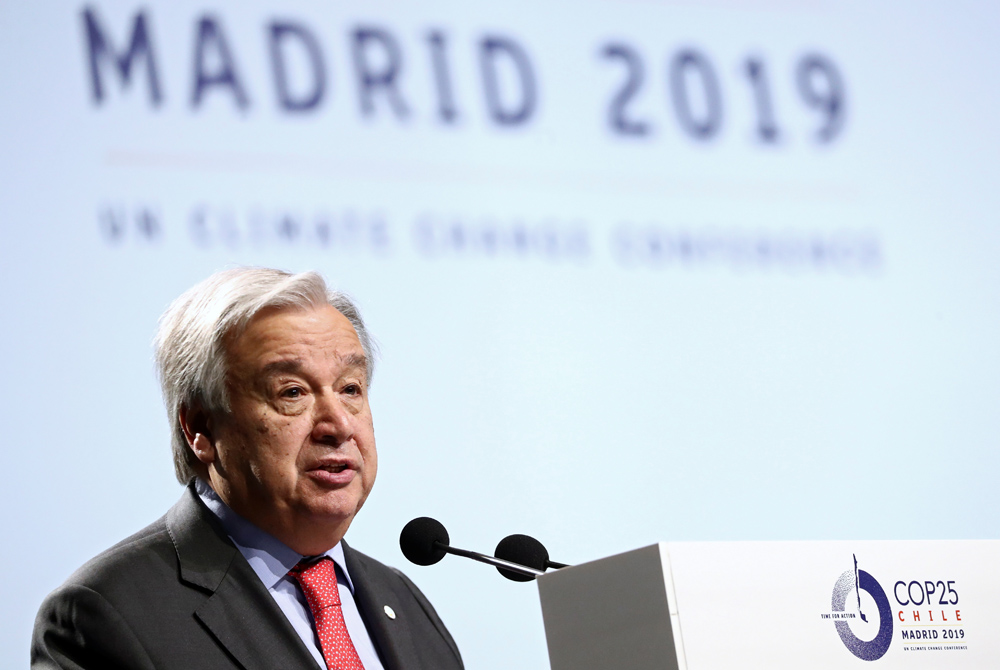 As COP 25 opened, many viewed it as an opportunity to be a launchpad to increase commitments to reduce global emissions, particularly through countries indicating intentions to put forth enhanced climate plans. While the Paris Agreement stipulates countries put forth revised plans every five years, COP 25 did not set a deadline for announcing those actions in 2020.

A total of 73 countries, largely from Africa and the Global South, announced they would increase their climate plans. Together, those nations represent just 10% of global emissions. Another 11 countries, all from Europe, stated they have begun internal processes to boost ambition in 2020.

Midway through COP 25, the European Union announced a plan to reach net-zero emissions by 2050. CIDSE, primarily based in Europe, urged the EU to "step up in its professed climate leadership role" by making public its 2030 climate pledge early in 2020.

A month before COP 25, President Donald Trump began the process to withdraw the U.S. from the Paris Agreement. The U.S. was among the nations viewed as obstructing the negotiations, which largely focused on addressing issues in Article 6 of the Paris accord.

During the first week of the climate conference, a congressional delegation led by House Speaker Nancy Pelosi announced that despite federal actions the U.S. was "still in" the Paris Agreement and committed to meeting the nation's climate pledge. The House Select Committee on the Climate Crisis is expected to present policy recommendations for congressional action by the end of March.

On Dec. 3, the congressional delegation met with a small group of faith leaders. Chloe Noël, program director on faith, economy and ecology for the Maryknoll Office for Global Concerns, participated in the meeting. She said the sides shared their commitments and goals for addressing climate change.

On our last day at #COP25, our bicameral delegation met separately with international, U.S. and faith-based NGOs, where we discussed our shared priorities in fighting the climate crisis and learned more about their critical efforts. #TimeForAction pic.twitter.com/iGJLwp0inI

"I really wanted to make sure that human rights are cornerstone of the Paris Agreement and our transition to renewable energy. And that in order to have a just transition that we need to respect human rights in the process," Noël said.

Making human rights more explicit in the structure of the Paris Agreement was a major priority for Catholic organizations at COP 25.

Noël told NCR such protections are necessary in the text to ensure renewable energy projects don't infringe on the rights of local communities and indigenous people to their land. She cited as examples of human rights violations the Barro Blanco Dam under construction in Panama, which has damaged land and food sources of the Ngäbe-Buglé people, as well as the Agua Zarca hydroelectric dam in Honduras, where disputes over the water source led to the assassination of environmental activist Berta Cáceres.

"It's impossible to have the real ambition we need to meet the goals if we don't have human rights secured in the agreement," Noël said. 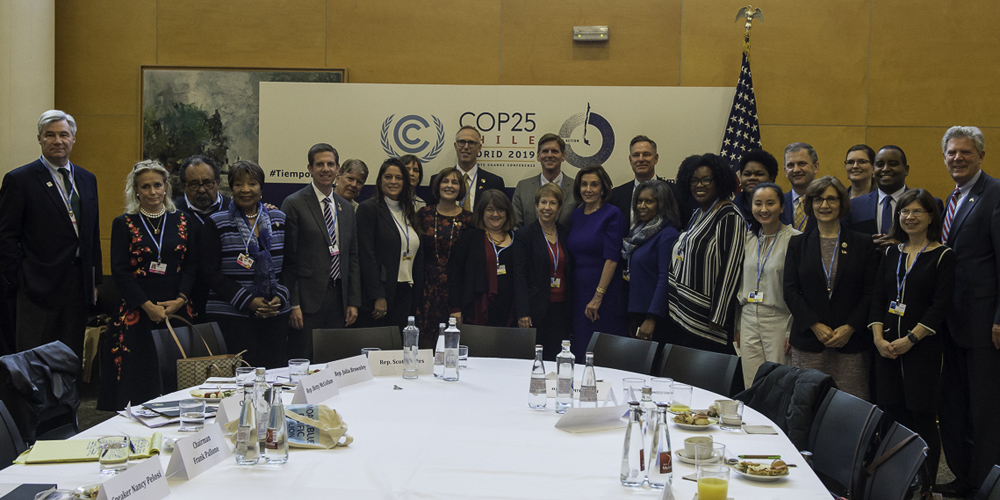 One area where Catholic organizations said human rights were sidelined was within the rules establishing global carbon markets, which would allow countries to trade emissions reduction credits.

Francis and Catholic organizations have criticized such a system as allowing developed countries to continue to pollute and consume at unsustainable levels.

While not supporting carbon trading, CIDSE joined other nongovernmental groups in welcoming the discussion on carbon trading tabled until next year, believing no deal in Madrid was better than a bad deal.

"This gives more time to establish fair, just and robust rules around carbon trading — if they are written at all," it said.

How countries ratchet up climate efforts is one reason why 2020 is shaping up as a year of major moments and milestones in the environmental movement.

The start of the next decade will mark five years since both Francis released his landmark encyclical "Laudato Si', on Care for Our Common Home" and the world's nations adopted the Paris Agreement. And April 22, 2020 will witness the 50th celebration of Earth Day.

More than 20 million Americans joined in the inaugural Earth Day in 1970, representing one-tenth of the U.S. population at the time. For the 50th anniversary, organizers hope to mobilize at least 1 billion people around the theme of increased action on climate change.

The Global Catholic Climate Movement is among the partner organizations working with the Earth Day Network to animate such calls for climate action across the globe in 2020. In addition, Catholic communities worldwide are exploring their own ways to commemorate five years since Laudato Si'.

Tomás Insua, executive director of Global Catholic Climate Movement, said the moment will enable Catholics to reflect on their efforts to protect creation, and to examine what more can be done as increasing extreme weather events endanger more and more people.

"In the five years since the publication of Laudato Si' and the signing of the Paris agreement, we've seen powerful new momentum for climate justice — and we've seen the worst of what happens when justice is left to wilt," he told NCR in an email.

Noël called it "really significant" that a year of such anticipated attention on the environment opened with a papal message that touched on ecology. She said it "reflects the strong message of both the need for dialogue and ecological conversion" not only as individuals but also in global leadership.

"In order to prevent the worst impacts of climate change and to address the harm caused to human rights defenders — especially indigenous people related to the extractive industries that are driving climate change — we must have an ecological conversion," she said.

A version of this story appeared in the Jan 10-23, 2020 print issue under the headline: With little progress at COP 25 climate summit, attention turns to 2020.