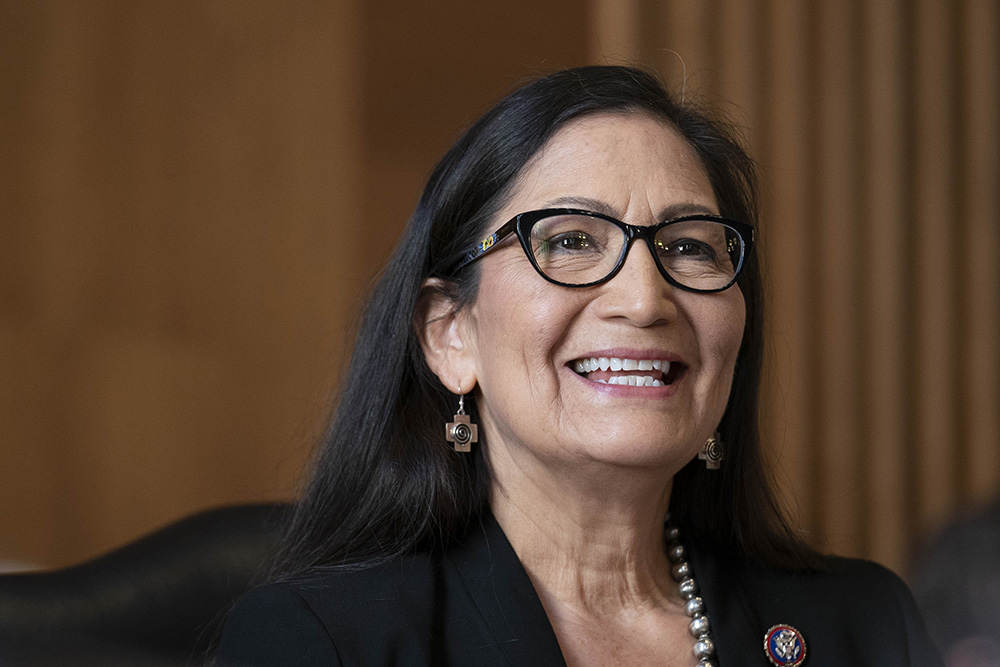 Indigenous tribes and environmental faith groups celebrated the confirmation of Deb Haaland as the next secretary of the interior, who was sworn in March 16* as the first Native American to serve in the Cabinet and as custodian of the nation's 500 million acres of public lands.

The U.S. Senate on Monday voted 50-41 in support of Haaland's appointment by President Joe Biden to head the Department of the Interior. The vote fell largely along party lines, with just four Republicans in favor.

In a statement after the vote, Haaland, a member of the Laguna Pueblo in New Mexico who in 2018 became one of the first two Native American women elected to Congress, thanked the Senate and expressed openness to working with all members.

The news was hailed by Native Americans across the country. The Indigenous Environmental Network called the Haaland confirmation "a historic and necessary step to healing the tribal relationships with the United States."

"We know that Haaland will help the administration find its path in confronting climate change, addressing the COVID-19 pandemic in Indian Country, ensuring an effective economic just recovery plan for Native nations and Indigenous communities, overseeing the protection of public lands, and fulfilling treaty and statutory obligations to the first peoples of Turtle Island," the organization said.

Terry Sloan, a member of the Navajo and Hopi people and director of Southwest Native Cultures in Albuquerque, told EarthBeat in an email that Haaland's confirmation signals "the beginning of a 'new era' of respectful land management and a new era of government-to-government relationships between Native American tribes."

Sloan, who like Haaland is Catholic and first worked with her on Barack Obama's 2008 presidential campaign, added that her upbringing in the Laguna Pueblo culture and traditions will bring a holistic Native perspective not seen before at such a high level of the federal government.

"I anticipate that the People will be heard, and action will be taken on their concerns of addressing environmental desecration to the land, air, and our sacred water," he said.

Haaland's appointment to a Cabinet position is historic in itself, but the post she will hold carries both symbolic and potentially substantial consequences for the nation's public lands and 574 Native tribes.

As head of the Department of the Interior, Haaland will have oversight of the management of one-fifth of the nation's land — first occupied by millions of Native Americans before European settlers began arriving on the continent in the 15th and 16th centuries — and how the natural resources on and below it are used. She will also oversee the Bureau of Indian Affairs, which facilitates the federal government's relationship with tribes.

Haaland is expected to be a key player in the implementation of the Biden administration's all-of-government climate plan. She represents an abrupt turn at the Interior, which under Trump appointees Ryan Zinke and David Bernhardt sought to expand mining and drilling across public lands, in national parks, including uranium mining in the Grand Canyon, and offshore.

During her confirmation hearings, Haaland pledged her support for Biden's goals of conserving 30% of U.S. lands and waters by 2030, banning new oil and gas permits and restoring land destroyed by excavation — all of which are likely to continue to draw fierce Republican opposition. She also said a personal priority would be addressing the crisis of the disappearance and murder of Indigenous women.

That an Indigenous woman will now lead the Interior Department represents a "full circle" moment, said Tashina Banks Rama, executive vice president of Red Cloud Indian School on the Pine Ridge Reservation in South Dakota, for an agency she said historically "enacted and enforced policies designed to oppress, assimilate or extinguish our ancestors" through relocation, boarding schools and declarations of war.

Maka Black Elk, a member of Oglala Lakota Nation and executive director for truth and healing at Red Cloud Indian School, said that government policies, like the underfunding of treaty obligations, continue to harm Indigenous peoples. He told EarthBeat that Haaland will respect sacred sites for Native Americans, reduce damage from unchecked extraction on tribal and public lands, and place combating climate change at the center of the Interior's mission.

Just as importantly, he said, Haaland will demonstrate that Indigenous people are not "a relic of the past" but "fully woven into the fabric of this nation."

"Change will not happen overnight. But Secretary Haaland, I believe, will represent tribal nations knowing full well what works for Native America and what doesn't," he said.

"For far too long have Native Americans, the original caretakers of America, been ignored and their calls for environmental and social justice for Mother Earth and our People been disregarded," said Sloan, adding that with Haaland in the Cabinet, "the United States has a chance to right over a hundred years of wrong to Native Americans, and adequately take care of and protect our most revered Earth Mother for seven generations to come."

GreenFaith joined in congratulating Haaland, saying her confirmation was "not just a win for Native representation — it is a win for everyone in the fight against climate catastrophe."

Interfaith Power and Light wrote on Twitter that Haaland "is dedicated to restoring equity & justice to all people on our #PublicLands, acting on climate, and fighting for science."

Franciscan Sr. Joan Brown, who as executive director of New Mexico Interfaith Power & Light worked with Haaland during her time in the U.S. House of Representatives, told EarthBeat she expects that addressing climate change will be a top priority for the new interior secretary. She expressed hope that Haaland would move to restore Bears Ears National Monument, in southern Utah, which Trump attempted to shrink by 85% of its 1.5 million acres.

"She is not afraid of confrontation or conflict if it is to care for Mother Earth, that is a first responsibility," Brown said.

The nation's leading environmental groups also welcomed Haaland's confirmation. The Sierra Club said Haaland "will bring a new era at Interior." The youth-led Sunrise Movement praised Haaland as one of the original co-sponsors of the Green New Deal and urged her to end oil drilling on public lands and in public waters.

The Global Alliance of Territorial Communities, an international coalition that represents Indigenous people in the Amazon Basin, other parts of Latin America and Indonesia, hailed Haaland for her commitment to addressing environmental injustice and economic injustice and to making sure that "tribal leaders — and all marginalized communities — have a seat at the table."

The Indigenous alliance called on Haaland in her new position not only to protect biodiversity from exploitation, but also to protect Indigenous communities around the world who seek to safeguard and restore the natural environment.

"The decision of the Biden Administration to nominate you, and of the US Senate to confirm you, represents a turning point," the alliance wrote. "With your help, we will erase the image of our peoples as obstacles to development. We are instead saviors of what remains of the natural world."

Beyond policy, the presence of a Native American woman in a presidential Cabinet is significant for other Indigenous women, said Rama, who is Oglala Lakota and Ojibwe.

"My family and I will celebrate what this means for our community, our daughters and our nieces," she said. "They will see a strong, educated and articulate woman who not only looks like them but understands the sacredness with which Indigenous people hold our lands and our traditional ways of life."

* This story has been edited to correct the date on which Haaland was sworn in.

A version of this story appeared in the April 2-15, 2021 print issue under the headline: Indigenous, environmental groups celebrate confirmation.