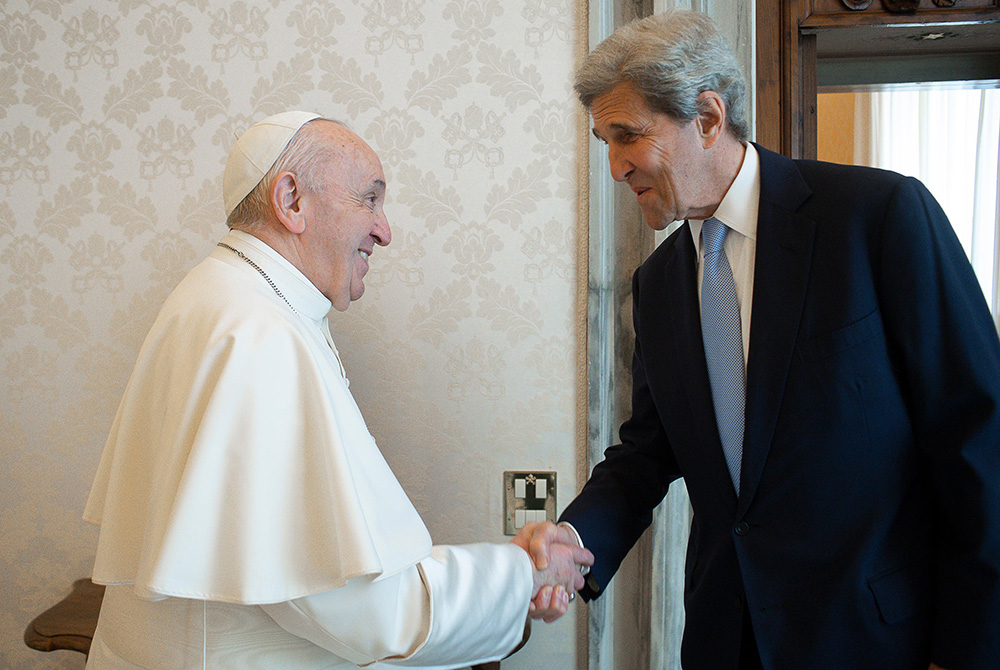 Because Kerry is not a head of state, the Vatican issued no statement about the meeting, although Vatican Media released photos and a video clip of the encounter in the papal library.

The video shows Kerry giving Pope Francis his autobiography, "Every Day Is Extra," and the Pulitzer-winning environmental novel The Overstory by Richard Powers. Pope Francis gave Kerry a signed copy of his message for World Peace Day, a collection of his encyclicals, including "Laudato Si', on Care for Our Common Home," and a sculpture of a grapevine.

In an interview later with Vatican News, Kerry said he believed Pope Francis intends to participate in the U.N. Framework Convention on Climate Change, commonly referred to as COP26, in Glasgow, Scotland, in November.

In fact, in one of the partial video clips released by the Vatican, Kerry can be heard telling his staff, "First day, he'll be there with the heads of state." Someone replied: "That's great. We've been hearing that, so it's nice to have confirmation." Kerry then said: "It will be amazing. I'm telling you it will have a profound impact."

In the Vatican News interview, Kerry said Pope Francis' moral authority and teaching on the need to address both climate change and poverty can rally more people to make a greater commitment to helping the environment.

People need to know, he said, that making a positive difference is possible and that climate change can be slowed while creating millions of new jobs.

The "concept note" for the pontifical academies' meeting, "Dreaming of a Better Restart," described "the current crisis and global state of confusion" as the result of "the globalism of selfishness, exclusion and the throwaway culture. Inequality and hunger are increasing, posing major ethical, economic and political challenges to which both policy makers and civil society must react."

"Extensive changes in international policy and financial architecture are required to address inequality," it said, and comprehensive plans must be developed to combat climate change and transform the global system of food production and distribution.

The first half of the afternoon meeting, which was conducted online and in person at the academies' headquarters in the Vatican gardens, focused on "Debt Relief for Developing Countries and International and Fiscal Architecture."

Janet Yellen, U.S. secretary of the treasury, was part of that discussion online and Kristalina Georgieva, managing director of the International Monetary Fund, gave the keynote address. Finance or economy ministers from Mexico, Germany, Spain, Italy and Argentina also were scheduled to speak.

"Many low-income countries lack the resources to pay for vaccines, support households and businesses hurt by the economic crisis, and meet their debt payments. I am concerned about a persistent spike in global poverty and a long-lasting global divergence in prosperity," Yellen told the meeting, according to a text posted on the Treasury Department website.

While progress has been made in suspending "debt service payments for the poorest countries," she said, "we must do more."

Currently, there seems to be a "race to the bottom on corporate tax rates," which may attract businesses to countries but leaves them without "stable tax systems that raise sufficient revenue to invest in essential public goods and respond to crises" and creates inequality among citizens as far as sharing the burden of financing government.

"We are working with G20 nations to agree to a global minimum corporate tax rate that can stop the race to the bottom," she said. "Together, we can use a global minimum tax to make sure the global economy thrives based on a more level playing field in the taxation of multinational corporations, and spurs innovation, growth and prosperity."

On the issue of climate, Yellen told the conference, "The cost of inaction is too great."

"We must fuel a clean energy revolution that creates good jobs, achieves justice, reduces emissions and pollution and tackles the climate crisis at home and abroad," she said. "Simply put, Treasury is focused on mobilizing finance for climate mitigation and climate adaptation and supporting the broader alignment of the financial system with net zero" emissions goals.

The second panel, for which Kerry was the keynote speaker, was on "Climate Change and Sustainable and Fair Energy and Food System Transformation," which the academies said would include a discussion about how "to mobilize public and private sector finance to drive the net-zero transition and to help vulnerable countries cope with climate impacts on their people's health."

Kerry's office did not release the text of his remarks.

The envoy was traveling to Rome, London and Berlin, May 13-19 to discuss ways to ramp up action to stem climate change even before world leaders meet at COP26.

Meeting with Italian government officials May 13, Kerry said that all countries must begin cutting emissions immediately if they are to have any hope of meeting the goal of keeping global warming under 1.5 degrees Celsius.

"It's not enough to say, 'zero emissions by 2050,' " Kerry said, according to ANSA, the Italian news agency. "We must do the things now that will make it possible to arrive at what we need by 2050."