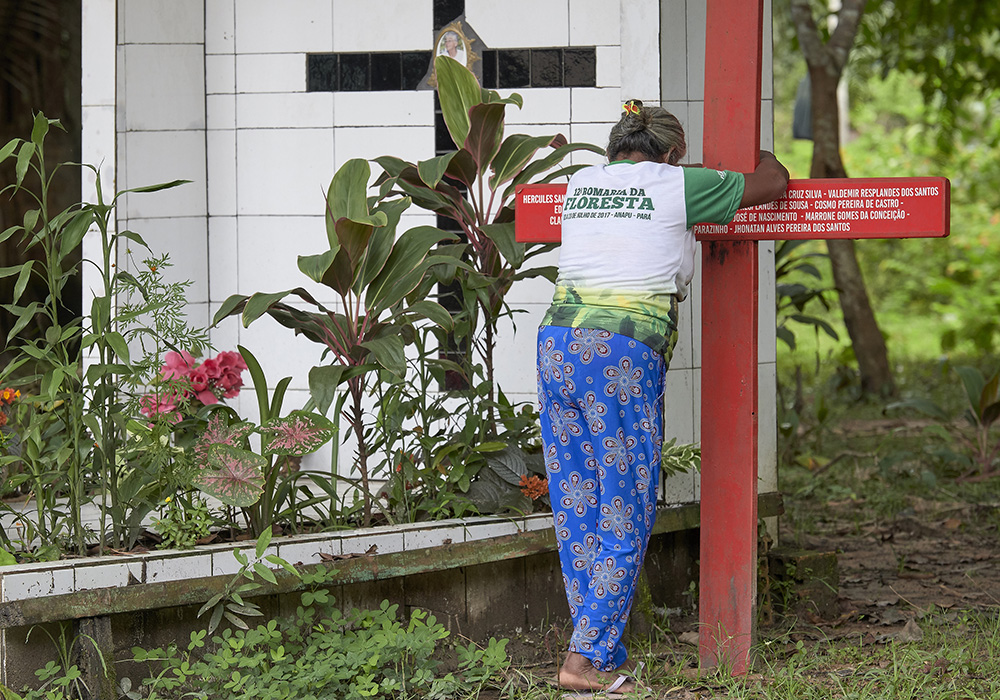 Antonia Silva Lima, a farmer in the Brazilian Amazon, prays at the grave of U.S.-born Sister Dorothy Stang in 2019, in Anapu, Brazil. Stang was assassinated in 2005. The red cross beside her grave bears the names of 16 local rights activists who have been murdered since her killing. Anapú is an area with a high number of murders because of land conflicts. (CNS/Paul Jeffrey)

An average of more than four people a week were murdered last year for defending their land against criminal groups, land grabbers or large-scale infrastructure projects, according to a new report from the London-based nonprofit Global Witness.

In a report released Sept. 13, the watchdog group reported 227 killings around the world, from Colombia to Congo to Kiribati. Colombia had the highest number, at 65, and joined Nicaragua, Guatemala, Honduras and the Philippines on the list of the five countries with the highest murder rate per capita. The number of murders recorded by Global Witness has grown steadily in recent years.

But the report does not reflect the full extent of the problem, the authors caution. Some killings go unreported or there is insufficient information for inclusion in the list. And the effect of the murders spreads even farther, as it has a chilling effect on others who are also standing up for land rights.

That "seems unlikely to change," she added, despite U.N. guidelines issued in 2011 to help ensure that businesses protect human rights in the countries where they work. "The figures are getting worse."

Of the cases in which causes were clear, most were related to logging, water and dams; mining and other extractive industries; illegal crops such as coca (the raw material used to make cocaine) and opium poppies; and industrial farming or ranching, the report said.

Many conflicts are related to dams and mining involve transnational companies, or domestic industries such as timber or agriculture that ship their products to foreign markets. Threats often follow protests by communities affected by those operations, said the Global Witness report, which called for companies and governments to do more to protect the communities' rights and the lives of their leaders. 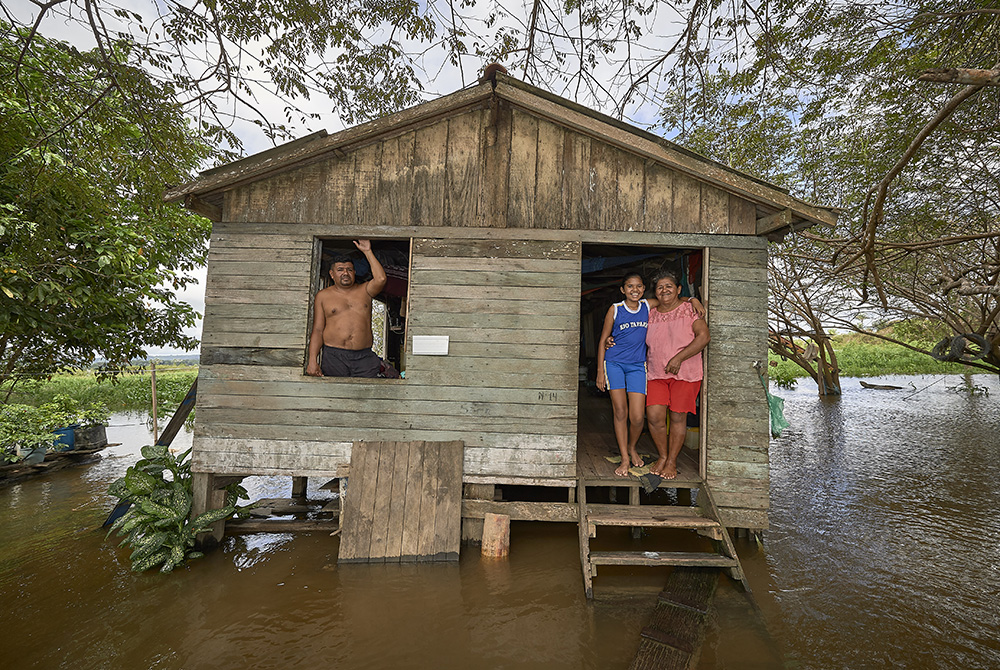 Juscelina Silva Batista (right), 54, her daughter Geovana Batista de Sousa, 11, and her partner Cantidio Rego, 69, stand in their home in a seasonally flooded area of the Amazon River near Santarem, Brazil, in 2019. The family is one of the last holdouts in an area where land is being bought up to build a large port facility. Failure to respect human and environmental rights leads to conflicts that sometimes turn deadly. (CNS/Paul Jeffrey)

Many countries in Africa, Asia and Latin America were once colonies, "and in a good number of places today, the relationship to the major industrial countries of Europe and America is still one of colonialism," Sr. Jean Bellini, a member of the Sisters of St. Joseph of Rochester, New York, and former national coordinator of the Brazilian bishops' Pastoral Land Commission, told EarthBeat.

"Those who have more wealth, more power, look to the other parts of the world with less infrastructure, less development, less tried and true democracies," said Bellini, a Long Island native who has worked in Brazil since 1976. "They look to them to find easy money, easy natural resources. The major countries [look] to somewhere else to get what they need and get it cheaply and close their eyes to the violence that might happen along the way."

More than a third of the fatal attacks were against Indigenous people, including massacres that opened and closed the year. In Nicaragua, where non-Indigenous settlers have been encroaching on Indigenous territory around the Bosawás Biosphere Reserve, an armed group murdered four Mayangna men in January 2020.

And in December, on the island of Panay in the Philippines, police killed nine Tumandok leaders and arrested others, claiming they were communist rebels. Human rights and environmental groups say the men, who had participated two weeks earlier in a protest against a large dam in their territory, were targeted because of their opposition to that project.

Brazil, where the report recorded 20 murders, has also seen an increase in killings of Indigenous leaders, Bellini said. Farmers and ranchers in the south seeking to expand their landholdings have been pushing steadily northward into the Amazon forest, where there are more protected areas and Indigenous territories. Under President Jair Bolsonaro, deforestation has reached its highest level since 2012, according to the nonprofit Institute of Man and Environment of the Amazon.

After taking office in 2019, Bolsonaro suspended the formal registration of Indigenous territories. He also said publicly that Indigenous peoples, who number about half a million in rural Brazil, should not have such large expanses of land. About 13.8% of the country is in Indigenous territories, mainly in the Amazon region, where scientists say those are among the areas where ecosystems are best protected.

Efforts by the government to reduce the size of some of those territories, with support from pro-industrial agriculture legislators known as ruralistas, have been challenged in court. Indigenous groups have been protesting in Brasília, the nation's capital, while a ruling from the Supreme Court is pending.

In Colombia, as in the rest of the world, attacks mainly target Indigenous leaders and leaders of communities of African descent on the Pacific coast, Luis Guillermo Guerrero, outgoing director of the Jesuit-run Centro de Investigación y Educación Popular in Bogotá, told EarthBeat.

"The reasons have been the same for many years," he said. "They are mainly because of the exploitation of natural resources, raw materials," including minerals such as coal, gold and emeralds, or water "because water is needed for the extraction of oil by fracking."

Individuals or companies seeking access to land are aided by unscrupulous notary offices that draw up legal documents in criminal webs that Guerrero called "mafias."

"They use illegal means to legalize land titles," he said. "It's a rather complex mechanism, but fairly common in the country since the last century."

Guerrero added that the land grabbing is driven by "interests that are purely economic and that ignore the history of these communities, their spiritual values and their values of life, of rootedness and of relationship with their territory."

Communities of African descent on the Colombia's Pacific coast are among those targeted by mining companies, as well as paramilitaries, drug traffickers and sometimes members of the military, said Jaime Díaz, director of the Bogotá-based nonprofit Corporación Podion, which works with grassroots groups.

Díaz was a friend of Company of Mary Sr. Yolanda Cerón, who, as director of the social ministry office of the Tumaco Diocese on the border between Colombia and Ecuador, was murdered in the doorway of the local church after she denounced collusion between paramilitaries and the Colombian military to appropriate land from communities for a company seeking land for an oil palm plantation.

Land grabbers often begin by gaining title to land that traditionally has been inhabited by communities that lack legal documents showing possession of their territory, Díaz said. Forced off their land, those communities then join Colombia's nearly 5 million displaced people, a number that has continued to grow despite the 2016 peace agreement between the government and the country's largest guerrilla group. 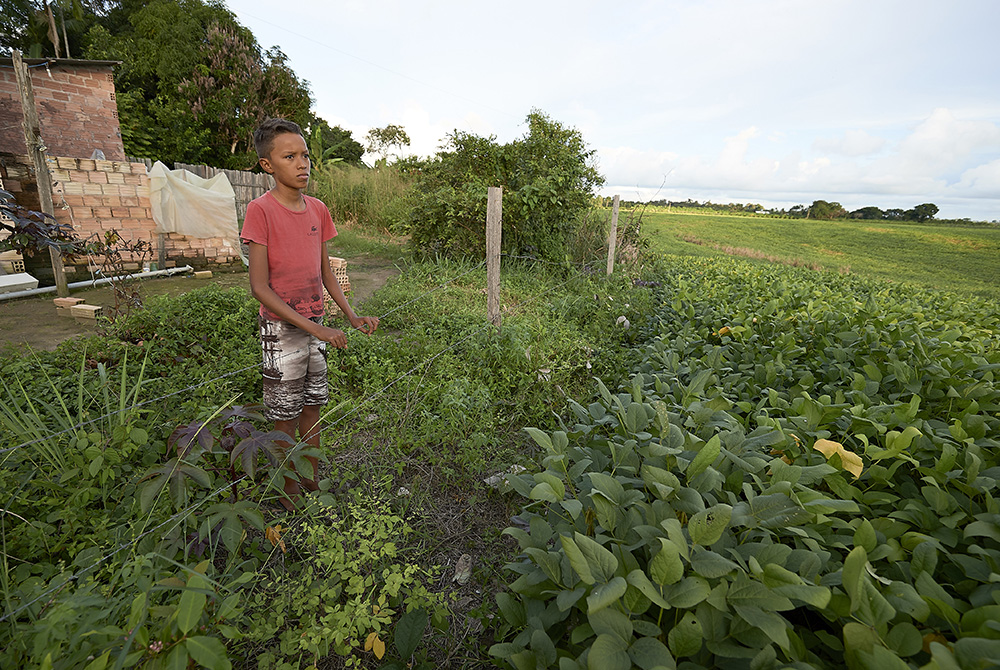 Rostan Gustavo Oliveira do Santos, 14, stands at a fence separating his family's home from fields of soybeans that have taken over community land outside Santarem, Brazil, in 2019. Expansion of industrial agriculture in the Amazon often comes at the expense of small communities, leading to land conflicts that sometimes turn deadly. (CNS/Paul Jeffrey)

Despite the threats, grassroots groups continue to denounce efforts to take their land, and are often supported by Catholic Church organizations, including the national pastoral ministry office, Díaz and Guerrero said. They also have their own proposals for implementing the peace agreement, which called for more equitable distribution of land, Guerrero said.

The Global Witness report urges governments to hold companies headquartered in their countries accountable for their operations in other countries, an effort in which consumers can also bring pressure to bear.

Legislation proposed in the European Union would require companies to conduct "due diligence," ensuring that not only their own operations but those of their suppliers and subcontractors take steps to protect human and environmental rights in the countries where they operate.

"The risks to human rights defenders should be considered in this process, and they should be monitored over the lifetime of the project," she said, adding, "There must be accessible paths to accountability through civil and criminal liability."