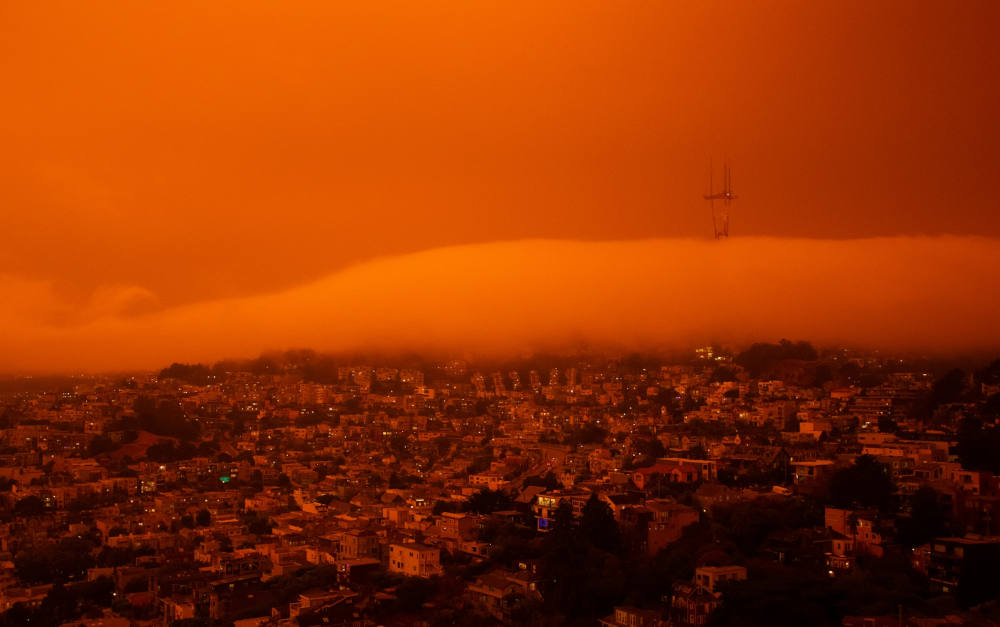 San Francisco is seen around noontime on Sept. 9, 2020, as wildfires in the Pacific Northwest turned the sky an ominious orange haze, and blanketed the city in darkness. (Unsplash/Patrick Perkins)

This would be a good moment for U.S. Catholic bishops to write a public letter to the faithful supporting the urgency for action to fight man-made climate change.

After floods in which people in New York have drowned in their homes, and as California residents breathe poisonous smoke from wildfires hundreds of miles away, U.S. legislators are debating laws meant to put a brake on temperatures rising too fast for the world as we know it to survive.

The United States is among the top contributors to the warming of the earth; global leaders, meeting Oct. 31-Nov. 12 in Glasgow, Scotland, at the United Nations climate conference called COP26, will take a cue for their decisions from what U.S. lawmakers do. The bishops, using their respected collective voice, can influence thoughtful legislators and the public by speaking out as they have so eloquently on other pro-life issues.

Once before, U.S. bishops issued a collective public address on an existential issue from the point of faith and morals when the future of the world hung in the balance: the 1983 pastoral letter, "The Challenge of War and Peace: God’s Promise and Our Response."

The teaching document, which argued against the use of nuclear weapons, was hugely controversial in an atmosphere of global arms' buildup during the Cold War, even though the bishops said they wrote as "pastors, not politicians."

George Kennan, the diplomat who successfully advocated the post-World War II policy of "containment" toward Soviet expansionism, called the letter "the most profound and searching inquiry [into nuclear ethics] yet conducted by any responsible collective body." Andrew Greeley, the Catholic priest, sociologist and widely known author, declared the U.S. bishops' stand to be "the most successful intervention to change attitudes ever measured by social science."

In the introduction to his 2015 encyclical about the ecological emergency, "Laudato Si', on Care for Our Common Home," Pope Francis said he addressed his words to “every living person on this planet." He said he did so just as St. John XXIII had addressed his Pacem in Terris encyclical in 1963 "to all men and women of good will" at a time that Francis described as when the world was "teetering on the brink of nuclear crisis."

The crisis that humanity faces right now is no less menacing.

Nations are way off track to meet the goals set in the Paris Agreement, reached in December 2015 at COP21, of reducing greenhouse gas emissions from fossil fuels so that global warming is held to "well below" 2 degrees Celsius by the decade's end, while aggressively working to limit it to no more than 1.5 C. Only slowing the earth's heat-up now will prevent more catastrophe — deadly heat waves and shocking floods, crop failures, water shortage, ecological collapse.

This would be a good time to hear from the U.S. bishops, while Congress is considering legislation to fortify U.S. action to curb climate change and resilience to its impacts and while the world is going to Glasgow with an eye on Washington.

It will take courage for representatives of Catholics in the largest capitalist economy in the world, and the globe's biggest consumer, to speak of curbing unchecked growth as a moral issue. But their words could be pivotal. More than 70 million Americans identify as Catholic, the largest individual religious denomination in the country, and the stand of the United States Conference of Catholic Bishops would be taken into account during these crucial legislative debates.

What are the chances we will hear from our bishops?

If we do, they will have to change course.

This would be a good time to hear from the U.S. bishops, while Congress is considering legislation to fortify U.S. action to curb climate change ... and while the world is going to Glasgow with an eye on Washington.

The bishops commonly express their thoughts and teaching to the faithful in columns carried by official diocesan publications. But a new eye-opening report by researchers from Creighton University, using a dataset of 12,077 columns written by bishops from 171 dioceses from June 2014 to June 2019 — or the year before, and the four years after Laudato Si' was issued — found that so far U.S. bishops have mostly ignored the crisis. Only 93 columns, a mere 0.8%, mentioned climate change at all, and of these, just 56 described it "in terms that suggest it is real or currently happening," according to the researchers.

Some of the columns downplayed the pope's authority to teach about climate change, while others "minimized focus on climate change within the Church's broader ecological teachings," the report concluded. Compared to 14 columns on climate change politics, the data showed that bishops opined in 495 total columns on the politics of abortion (284), healthcare (118) and immigration (93).

Meanwhile, the need for care for "our common home," as Francis calls it, has caught fire among many ordinary Catholics.

"I realized how much faith is part of environmental awareness, of creation," 22-year-old Kyle Rosenthal of Rochester, New York, told me recently by phone.

A recent graduate of Boston College, Rosenthal coordinates the Catholic Divestment Network of 27 Jesuit colleges in which students lobby their university administrations to take investments out of the fossil fuel industry. Rosenthal is urging change in USCCB investment guidelines, too, which haven't been updated since 2003.

"It's not just the youth, but the bulk of people are frustrated that the environment is not prioritized," Rosenthal said. "The bishops' 'pre-eminent' issue is abortion, while environmental destruction is actively killing people daily. They can hold multiple issues in mind."

At my local parish, Mary Rose LeBaron, 48, moderates an environmental concern circle of about 20 members. They meet every two weeks to pray and reflect, as well as share information about changing consumer habits, plant food gardens, organize beach clean-ups, and lobby government representatives on issues like destructive mining. In individual encounters, LeBaron told me, people have spoken to her of their grandchildren, wondering whether there will be a future for them.

"I saw tears welling up in their eyes," she said.

The end of the world as we know it is certainly the equivalent of the possibility of nuclear war that U.S. bishops faced so wisely and bravely almost 40 years ago. The bishops have the key document before them: Laudato Sí. To ignore it, especially in this moment, would be to act within a theoretical "conspiracy of silence," as the Creighton researchers describe it, whereby a group of people tacitly agree to outwardly overlook something of which they are all personally aware.

We individual Catholics and "people of good will" need the support of our church.

To the bishops: Hear our voices and join us, lead us.