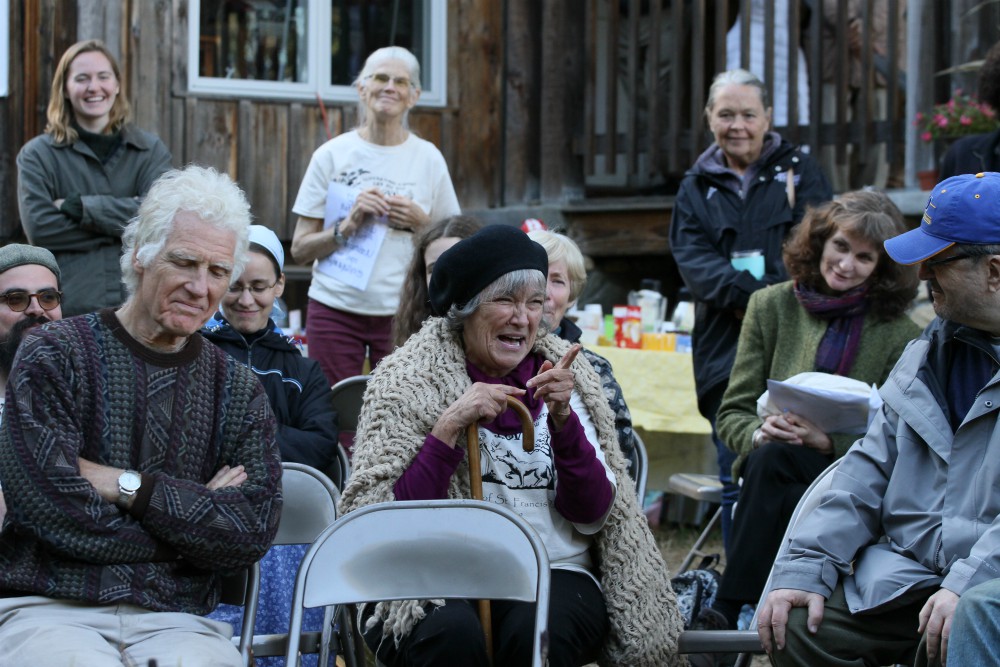 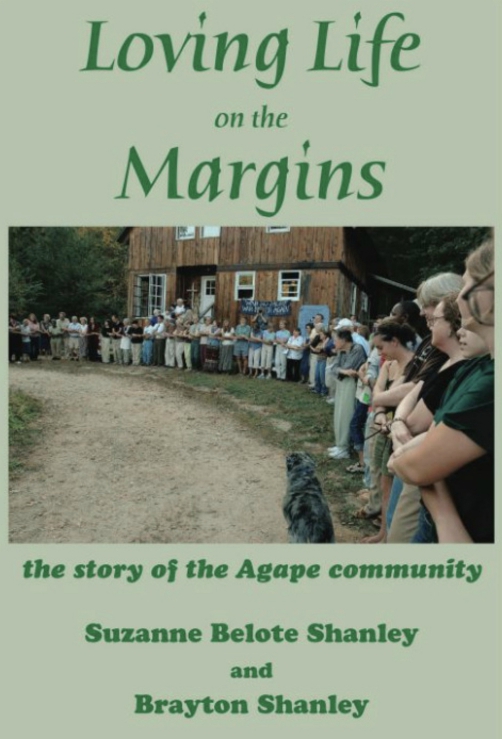 Loving Life on the Margins: The Story of the Agape Community
Suzanne Belote Shanley and Brayton Shanley
336 pages; Haley's
$24.95

For progressive Catholics of a certain age, Suzanne and Brayton Shanley have mapped an array of roads perhaps once considered, but for the most part not taken.

Those of us who stepped out into the world in the '60s and '70s were presented with such radical role models as the Berrigans, Elizabeth McAllister and Dorothy Day. As compelling as their stories were, most of us admired them and moved on.

The Shanleys chose the bolder option, making one decision after another to follow in those footsteps and pursue a life that had them, in the words of their book title, loving life on the margins.

Over the years, their work has included persistent resistance to the forces they see as inconsistent with the Gospels, including war, systemic racism and desecration of the planet. But Loving Life on the Margins: The Story of the Agape Community is more than a story of what they would do. It's a tale of how they would live. One way to avoid paying taxes that help support the military, for example, is to live so simply you have no taxable income.

Theirs also is a narrative of unconventional choices rendered all the more compelling by the previously unthinkable disruptions forced by the pandemic. Not to mention the upheaval almost certain to accompany the climate crisis before long.

Making reference to Luke 12:56, they describe their book as an "attempt to do what Jesus asked: 'Interpret the present time,' " expressing the hope that readers "will find in the Agape story something worthy of interpretation as a commentary on the lineage and future of small faith communities like ours."

They eschew the term "memoir" as "too self-referential" and instead present themselves as "co-authors of a spiritual journal," with alternating entries by each of them.

It was the late '80s when they set up Agape as an intentional community on 34 acres in rural western Massachusetts, a center where hundreds of volunteers have gathered since to help build and sustain the place and its work. The Shanleys adopted a lifestyle they describe on the Agape Community's website as an effort "to create and to preserve a morally coherent life in fidelity to our faith and to the calling of people of all faiths."

At the point that they decided to settle in the woods, Suzanne was 39 and Brayton, 37.

"Up to then," Brayton writes, "neither of us had ever planted a seed in the ground nor pounded a nail into a piece of wood. ... Our skills — or lack thereof — did not prepare us for our rural plunge. No way. We may as well have been rocketing to Mars."

But with the help of friends, they cleared enough land for a dwelling they built and called "Francis House." It became home to Brayton, Suzanne, daughter Teresa, and a series of interns who live there for extended periods while doing the work of the community — growing food, demonstrating for peace, speaking up on behalf of prisoners.

Not everything has worked out the way they expected, but that seems beside the point of their lodestar: living intentionally not only with each other and their community but with the rest of creation.

Consider their relationship with automotive fuel, a story that begins with rigging up a 4-year-old Volkswagen Jetta to run on vegetable oil instead of diesel.

Brayton recalls thinking that, even across a lifetime of unorthodox decisions, this one risked tipping the scales too far.

"It takes one and a half hours to filter a twelve-gallon tank's worth of grease plus clean up," he writes. "It would take me five minutes to fill my tank at the downtown Exxon Mobil. I don't care what gasoline costs — [the grease option] is too much work."

For most of us, that would have been the end of it. Brayton explains why it wasn't for Agape:

Thankfully, a wider voice counters: I do care what it costs both to pocketbook and to planet. I am reminded that, in our environmental age, to retrieve the planet back from inevitable climate-change Armageddon requires hard, creative work that is going to hurt and challenge our comfortable routines. The idols of convenience, efficiency, comfort and pleasure serve as the drugs of choice for Americans living in our high-tech modern world — some expensive narcotics.

So the couple spent $1,500 to convert their Jetta and, in place of ExxonMobil, persuaded a local restaurant to pass along its Fryolator french-fry grease. 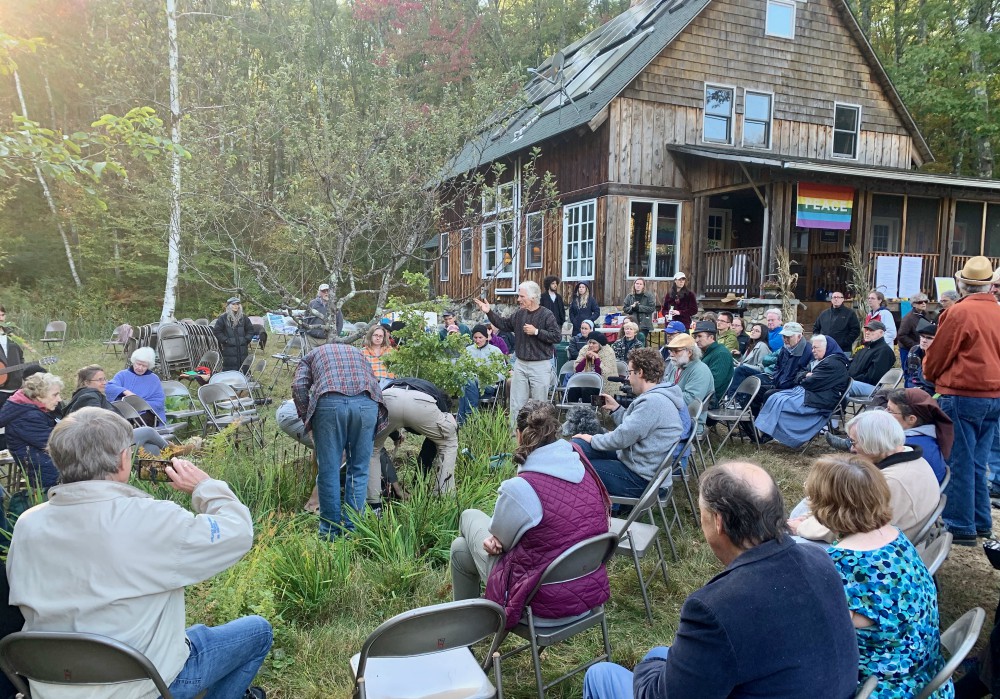 Even if you've never for a minute considered powering your car with food waste, Loving Life on the Margins suggests a provocative framework for weighing whatever options life presents.

Ten years into their time at Agape, the Shanleys hit a snag. Their daughter, Teresa, took a stand: "Mom, I'm done with community life in Francis House. We need a new house."

Sharing Francis House with non-family members had proven too much for a 13-year-old, and her parents understood. But what to do?

Among the possibilities was a separate family home like the straw house built by Dominican Sr. Miriam Therese MacGillis, a founder of Genesis Farm and a student of the late "geologian" Passionist Fr. Thomas Berry.

Intriguing, but the prospect of straw bales in place of the stone and wood holding up Francis House seemed, like the grease-powered Jetta, a bit much. A friend sent a straw bale design, but Brayton said he "stuck it deep into our files under 'too strange to imagine building.' "

But build it they did, complete with five off-grid solar panels on the roof and a composting toilet off the living room.

In a foreword, historian David O'Brien likens the Shanleys' life "on the margins" to what Pope Francis describes as "the periphery," that place where people who have been marginalized for whatever reason find themselves trapped.

Living there — and loving it — is rooted in what Brayton describes as a journey by two cradle Catholics in pursuit of "a new way of being Catholic." 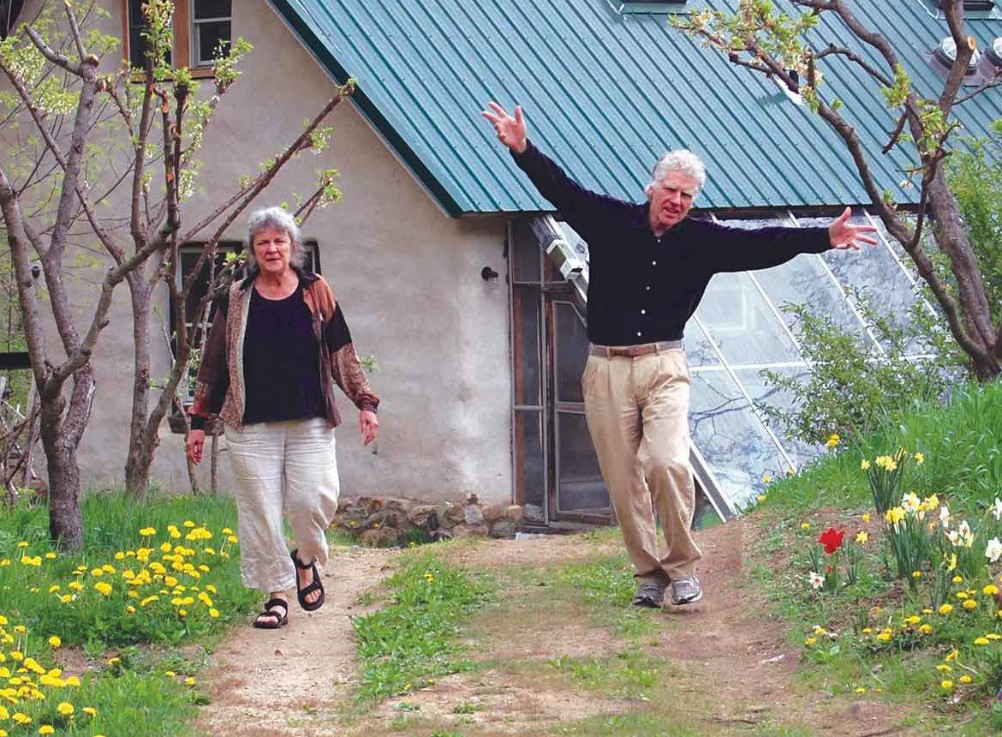 Suzanne Belote Shanley and Brayton Shanley of the Agape Community, with a house constructed of bales of straw in the background (Claudia McNeil)

They began with "the image of God as the Divine Feminine, that God's heart and ungraspable power is Mother as well as Father," adding:

We have come to believe that the womb-love of God gives birth to voices joined in prayer and song, souls born into longing and pain, struggling to be reflections of what is possible in our short time on this imperiled, glorious planet.

But how to reconcile such a foundation with a church that relegates women to second-class membership?

"I have thought long and hard about the question," Suzanne writes, "especially as so many young women who come to Agape deal with feelings of alienation from church structures."

Since we are not part of traditional church structures at Agape, I have broad autonomy. Brayton and the other men in leadership roles in the community support me in preaching and leading prayer and liturgy. Fortunately, the structure of our community life allows me freedom of faith practice that remains steadfastly within the Gospel tradition of Jesus, who challenged existing structures of religion while paying a steep price for his inevitable marginalization.

As Brayton puts it, "Our relationship to church authority and church tradition grew horizontally, not vertically."

It turns out that when your destination is a life on the margins, moving horizontally rather than vertically might be just the way to go.