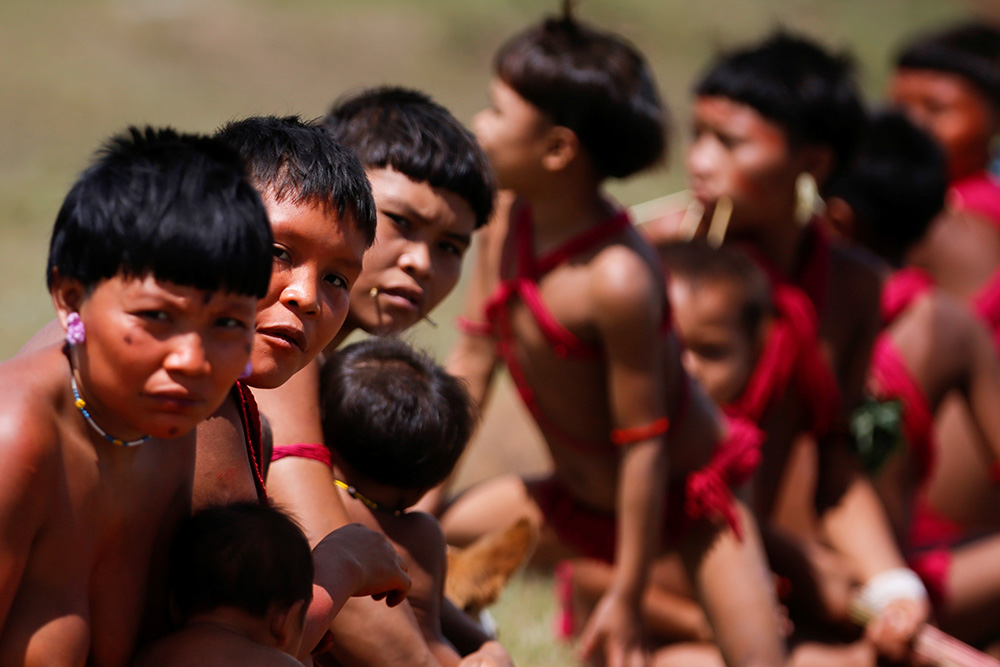 Young Yanomami look on as members of a medical team with the Brazilian army examine members of the Indigenous tribe in the state of Roraima July 1, 2020, during the COVID-19 pandemic. (CNS/Reuters/Adriano Machado)

Bishop Roque Paloschi of Porto Velho, Brazil, recalls attending a meeting about development in the Amazonian state of Roraima, home of the Indigenous Yanomami people, at which a government official commented that indigenous people were very poor.

Davi Kopenawa, a Yanomami leader and shaman, stood up and replied, "We are not poor. We have the entire forest. We do not oppose development, but my question for you, ladies and gentlemen, is what kind of development is it that destroys nature and poisons the land and the water to concentrate profit in the hands of a few?" 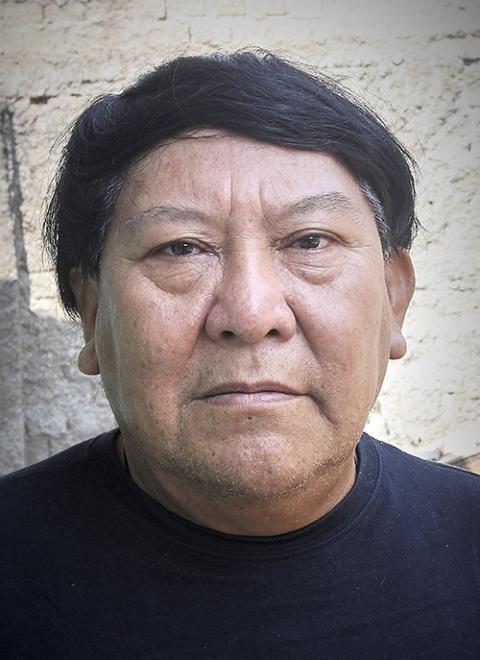 Now Kopenawa has become the first Indigenous leader elected to the century-old Brazilian Academy of Sciences.

"We would like to congratulate the academy, which had the courage to elect a member of the original peoples of Brazil," Paloschi, who is president of the Brazilian bishops' Indigenous Missionary Council, told EarthBeat.

"It's good that the academy has recognized the ancestral wisdom of indigenous peoples, especially at this time, when humanity is experiencing a socio-environmental crisis that is unprecedented in history, the planet is sick, and Indigenous peoples are the teachers who teach us to have a harmonious and respectful relationship with all of creation," he said.

"For centuries, Indigenous peoples in Brazil and throughout the world have denounced the violation of their rights and the rights of nature," Paloschi said. "In Brazil, those peoples are threatened physically, and their culture and territory are also threatened" by an economic model that turns the goods of nature into commodities, he added.

Kopenawa has gained international recognition for speaking out about massacres of his people and environmental destruction by wildcat gold miners who have invaded the Yanomami territory that straddles the border between Brazil and Venezuela. Last year, he and other leaders warned that miners had carried the new coronavirus into the territory.

"Davi Kopenawa has been a great hero of sustainability of the Amazon forests, and we are completely aligned with what he has been saying worldwide," Luiz Davidovich, president of the Brazilian Academy of Sciences, told EarthBeat. "We also think that maybe he is better known outside of Brazil than in Brazil — he has received very distinguished prizes outside of Brazil — and we think it is about time to have him recognized in Brazil."

The Brazilian Academy of Sciences has three membership categories — one for older, more experienced scientists; one for scientists under age 40; and one for "collaborators," who are recognized for their contribution to science. Kopenawa was elected as a collaborator in November and officially became a member on Jan. 1, Davidovich said.

In December 2019, Kopenawa won the Right Livelihood Award, sometimes called the "alternative Nobel," for his defense of his people's culture, lives and territory. Not long afterward, the COVID-19 pandemic began sweeping through Amazonian Indigenous communities, and in April 2020, a teenage boy became the first Yanomami to die of the disease.

So far, the coronavirus has killed at least 2,300 Indigenous people in the Amazon, according to Gregorio Díaz, who heads the Coordinator of Indigenous Organizations of the Amazon River Basin, a regionwide umbrella group. Brazilian health officials are investigating reports that nine Yanomami children may have died recently of COVID-19.

Kopenawa is a "not only a political leader, but also a cultural and spiritual leader of his people," said Márcia de Oliveira, a social sciences professor at the Federal University of Roraima in Boa Vista, Brazil, who participated in the 2019 Synod of Bishops for the Amazon as an expert.

In a region where scattered communities have little access to medical care, Kopenawa "has stood out because of his fight against the pandemic, especially in the quest for medicines and solutions … based on Indigenous people's traditional knowledge," Oliveira said.

In a 2019 interview, Kopenawa said his people's creator, Omame, gave the Yanomami the forests of the Earth and all the plants and creatures that inhabit them.

"The Yanomami thought, 'We will care for our planet Earth, because there is no other land where we can go,'" he said, adding that the game animals, wild honey and trees that bear fruit like açaí and Brazil nuts "are very important, so our children have food."

White people "invaded our Amazonia" to despoil the land and turn its water, timber, minerals, animals and plants into merchandise, he said. And it was white people who gave the region its name. 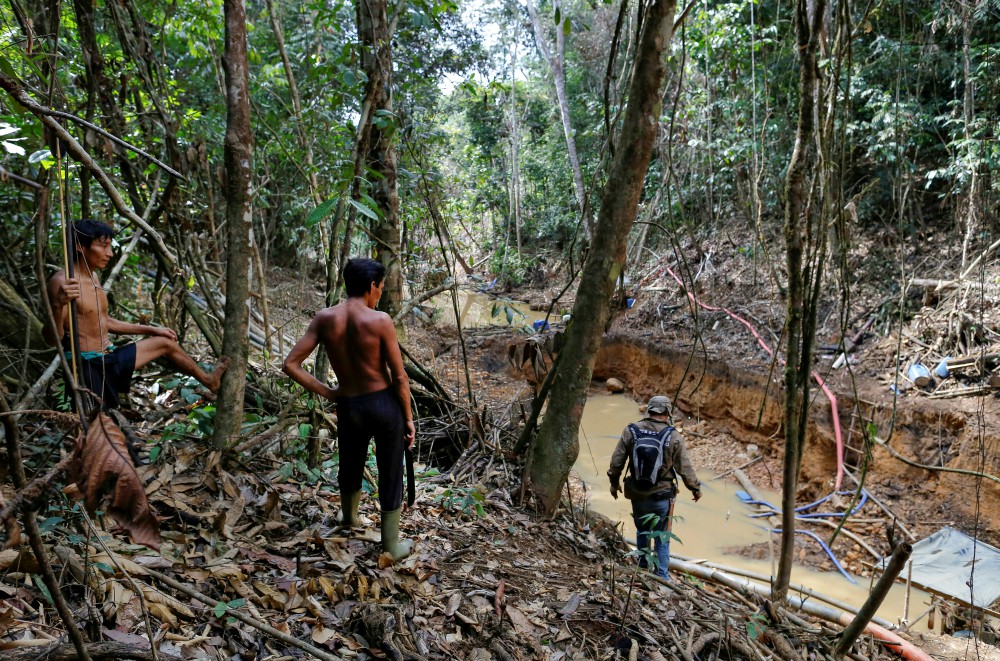 Yanomami are seen in a file photo following members of Brazil's environmental agency during an operation against illegal gold mining on indigenous land in the heart of the Amazon rainforest. (CNS/Reuters/Bruno Kelly)

As climate change grows more intense, "the whole world is looking to the Amazon," he said, adding, "Future generations need the forest."

Both Davidovich and Paloschi see Kopenawa's inclusion in the Academy of Sciences as an acknowledgement that the worldview of the Amazon's Indigenous people is valuable for Western scientists.

That is particularly true now, during the pandemic, when scientists are becoming increasingly aware that human health is closely tied to the health of ecosystems, Davidovich said.

"Many people of the white civilization say [Indigenous] knowledge is not as rich as ours, but it's a different kind of knowledge, so we should have a look at that and try to learn something," he said. "Let's agree that the way our civilization is going, we cannot really be proud of it — wars and leaders who don't believe in science."