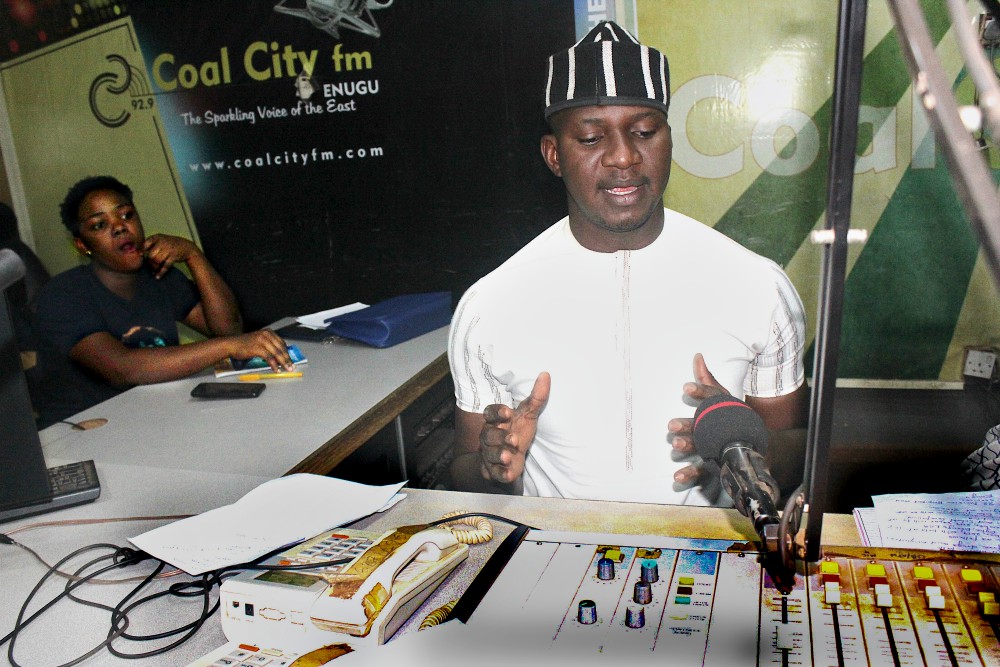 "Hello, good morning and welcome to 'Climate Time' on Coal City 92.9 FM," Ekene Odigwe's voice thundered from the studio in Enugu, South East Nigeria. "My name is Ekene Odigwe and it's a beautiful Monday morning. On 'Climate Time' today, we shall be discussing the climate, the weather and how we can take care of our environment."

Odigwe is a popular presenter with Radio Nigeria — Nigeria's first national public radio station that reaches up to 3 million listeners across 11 states. He's also one of Nigeria's leading young climate champions. Every Monday, from 10:30 a.m. to 11 a.m., Odigwe, who is in his early 30s, uses the radio to advocate for positive action on climate change in Nigeria.

"We shall talk about scalable solutions that we can use to make sure that we are friendly to the environment and the environment is friendly to us as well," he said on his show Aug. 5, 2019. "Today's edition of the program will focus on nondegradable plastics and how they affect us all."

Odigwe's radio program focuses on raising awareness on climate change issues as a way of calling for urgent steps to reduce the societal impacts of climate change in Nigeria.

During the program, listeners call in through a designated telephone number and ask questions, such as what climate change is all about and how they can be involved in creating awareness in their communities. Through this interactivity, listeners learn about climate change issues and how to adapt to practices that protect the environment.

On this special edition on the effect of plastics on our environment, Odigwe explains to his listeners how the proliferation of plastic contributes to greenhouse gas emissions.

"They find their way into the rivers and oceans and help in polluting our environment and the fish we eat," he says.

In May 2019, Nigerian lawmakers passed a law banning the use and production of plastic bags in the country in order "to address harmful impacts to oceans, rivers, lakes, forests, environment as well as human beings."

Odigwe, who has worked at the station since 2011, says that most of his efforts "are focused on advocacy and development journalism and I champion a lot of works around the [U.N. Sustainable Development Goals] on climate action and health." 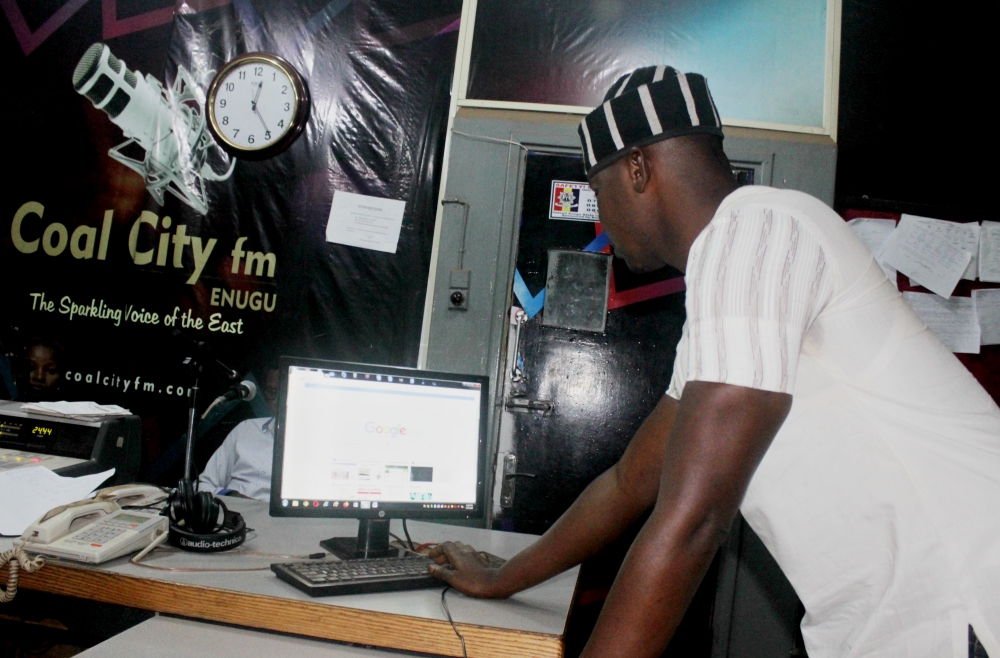 Odigwe's interest in the climate crisis started in 2014, when he visited communities in South East Nigeria that witnessed damaging flooding some months earlier. He had received a report about the effect of flooding in the communities. More than 1,000 people were displaced. The government promised to rehabilitate those affected but failed to keep its word.

A new United Nations report says climate change is the greatest threat to sustainable development. According to the World Health Organization, nine out of 10 people breathe polluted air, which a Stockholm Environment Institute report says causes up to 33 million asthma-related visits to hospitals globally. Odigwe is using the power of radio to spread the message on climate change so as to counter these consequences.

"I want to use this platform [radio] to contribute to the growing debate on climate change," he says.

Odigwe regularly visits communities in Nigeria battling with climate change effects like erosion and flooding. When he returns, he prepares his script and uses his airtime to discuss these issues.

Specifically, Odigwe said he wants to use his voice to draw the government's attention to take action. "The communities are always submerged in water and no one is doing anything to help them," Odigwe said. "When this happens, they leave their homes and migrate to another community and do not return afterwards."

To achieve positive outcomes, Odigwe adopts the human-interest approach by telling the stories of people forced to flee their homes when the flooding starts.

Samuel Idoko, 40, was one of the victims whose home was swept off during heavy flooding in July 2019 in Nsukka, a farming community in South East Nigeria.

"We escaped that night by luck," Idoko told NCR. "In the morning, we saw that our neighbors' houses have all gone and three people were killed in the process."

Idoko is not alone. Each year, thousands of Nigerians, especially those living in riverine communities, are affected by flooding following heavy rainfall. In July 2012, Nigeria witnessed the worst flooding in 40 years, killing 363 people and displacing more than 2.1 million others, according to the National Emergency Management Agency.

In August 2012, one month after flooding swept away Idoko's home, Eunice Oju woke up in the middle of the night, cuddling her 2-year-old baby, when she found out that her room had been flooded. With her wrapper girdled around her waist, she held her baby firmly at her back and escaped through the window, she told NCR.

"I was very scared that night," she said. "This is how we normally live during rainy season, and our farmlands and animals are all affected."

Nigeria has an Ecological Fund Office established in 1981 to have a pool of funds that would be solely devoted to the funding of projects to tackle serious ecological problems like climate change disasters in the country. However, these funds are often embezzled by corrupt government officials, according to an investigation by the International Centre for Investigative Reporting. 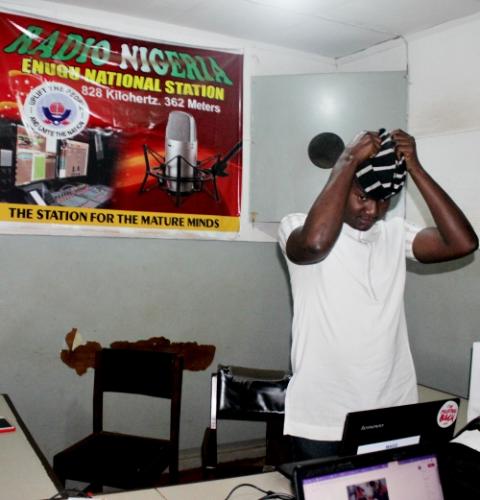 Ekene Odigwe gets ready to record his weekly show in a Radio Nigeria studio. (Patrick Egwu)

Odigwe said he wants his radio advocacy to hold those responsible for the embezzlement to account.

Apart from "Climate Time" on Radio Nigeria, Odigwe uses another online radio program he founded called the "Red Carpet Show" to advocate for climate change action. On that program, he invites experts to speak on climate change and educate the public.

As world leaders deliberated on global implications of the climate change crisis during COP 25 in Spain, Odigwe said he hopes his little effort helps create change in local communities affected by climate crises in Nigeria.

"I want to use what I do to provide solutions to these issues and change the narrative," he said. "People somewhere are embezzling these funds to the detriment of the communities."

"The whole world debate now is centered towards climate change and how we are gradually losing our environment," said Emeka Kalu, a scientist and climate advocate. "So when people are informed about climate change issues and how to save their environments, then the purpose of the program has been achieved."

"Thank you all for being a part of this program," Odigwe said toward the end of his show. "It's been an interactive edition and we now know that wrong usage and disposal of plastics, for instance, threatens the environment and puts human lives at risk. To make our environment healthy, we need to dispose our plastic waste properly through recycling."

He continues: "Until people begin to see themselves as part of the process, they won't be able to do anything," he said. "With this platform, I can be able to speak more and reach a wider audience to join in this call to action."