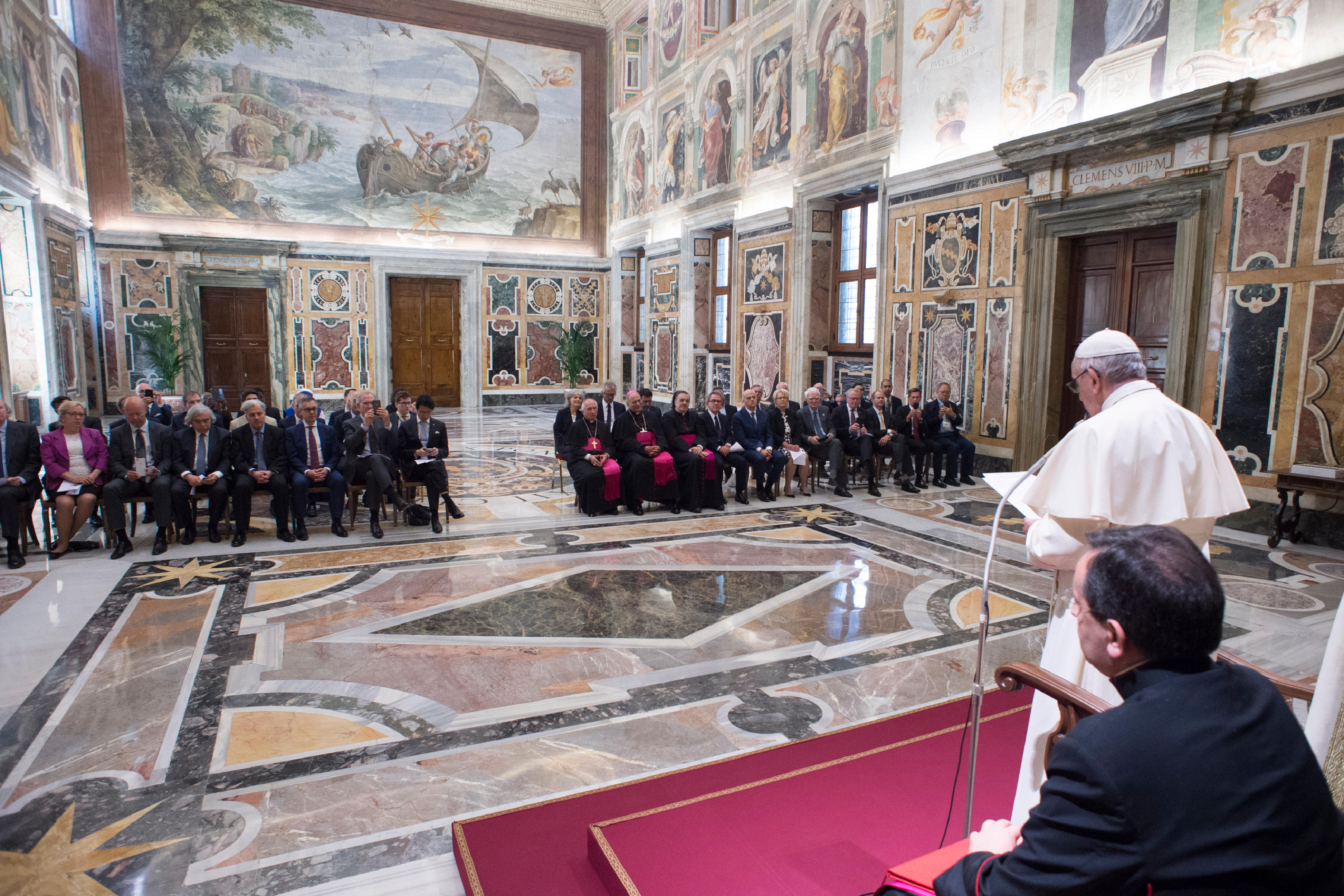 Pope Francis speaks during an audience with executives of oil and gas companies at the Vatican June 9. The executives were attending a symposium organized by the Vatican Dicastery for Promoting Integral Human Development and the Mendoza College of Business at the University of Notre Dame in Indiana. (CNS/Vatican Media)

The world needs a new kind of leadership that believes in building up the whole human family and protecting the environment, Pope Francis told a group of energy and oil executives and global investors.

That also means using alternatives to fossil fuels for meeting everyone's energy needs and mitigating the effects of global warming, he said.

"Civilization requires energy, but energy use must not destroy civilization," he said in his address June 9 at the Vatican.

The pope spoke to leaders taking part in a conference June 8-9 on "Energy Transition and Care for Our Common Home," sponsored by the Vatican's Dicastery for Promoting Integral Human Development and the University of Notre Dame's Mendoza College of Business in the United States.

Francis thanked the attendees for participating in the meeting and said he hoped they had been able to "re-examine old assumptions and gain new perspectives."

"We are challenged to find ways of ensuring the immense supply of energy required to meet the needs of all," including the estimated more than 1 billion people who lack access to electricity, "while at the same time developing means of using natural resources that avoid creating environmental imbalances resulting in deterioration and pollution gravely harmful to our human family, both now and in the future," he said.

It is not right that satisfying the "thirst" for energy of some parts of the world results in pollution, scarcer resources, poverty and social exclusion for others.

There is an urgent need, he said, "to devise a long-term global strategy able to provide energy security and, by laying down precise commitments to meet the problem of climate change, to encourage economic stability, public health, the protection of the environment and integral human development." There needs to be a serious effort to transition to energy sources that are highly efficient while producing low levels of pollution, he added.

"This is a challenge of epochal proportions. At the same time, it is an immense opportunity to encourage efforts to ensure fuller access to energy by less-developed countries," the pope said, "as well as to diversify energy sources and promote the sustainable development of renewable forms of energy."

"Our desire to ensure energy for all must not lead to the undesired effect of a spiral of extreme climate changes due to a catastrophic rise in global temperatures, harsher environments and increased levels of poverty," he said.

However, despite nations agreeing to cut back on greenhouse gas emissions with the Paris Agreement, such emissions and concentrations of gases in the atmosphere still remain very high, which is "disturbing and a cause for real concern," he said.

"Yet even more worrying is the continued search for new fossil fuel reserves" when nations were asked to keep most fossil fuels underground, he said. "This is why we need to talk together -- industry, investors, researchers and consumers -- about transition and the search for alternatives."

Praising progress made by oil and gas companies in developing new approaches that assess "climate risk" and by investment companies in taking sustainability into account, the pope asked if that was still enough: "Will we turn the corner in time?"

Business, investment and government decisions must "be guided by the pursuit of the long-term common good and concrete solidarity between generations. There should be no room for opportunistic and cynical efforts to gain small partial results in the short run, while shifting equally significant costs and damages to future generations," he said.

"We must acknowledge that the demand for continuous economic growth has led to severe ecological and social consequences, since our current economic system thrives on ever increasing extraction, consumption and waste," the pope said.

The problem, he said, is a cultural one, a "lack leadership capable of striking out on new paths in meeting the needs of the present with concern for all and without prejudice toward coming generations."

People must renew the way they relate to nature and each other, he said, calling for "a new form of leadership" in which leaders "have a clear and profound realization that the earth is a single system and that humanity, likewise, is a single whole."

The pope told the leaders, "There is no time to lose." He said the talent, creativity and experience that have made them successful are the same skills that are needed for improving the lives of the poor and caring for the environment.

"I invite you to be the core of a group of leaders who envision the global energy transition in a way that will take into account all the peoples of the earth, as well as future generations and all species and ecosystems," he said.