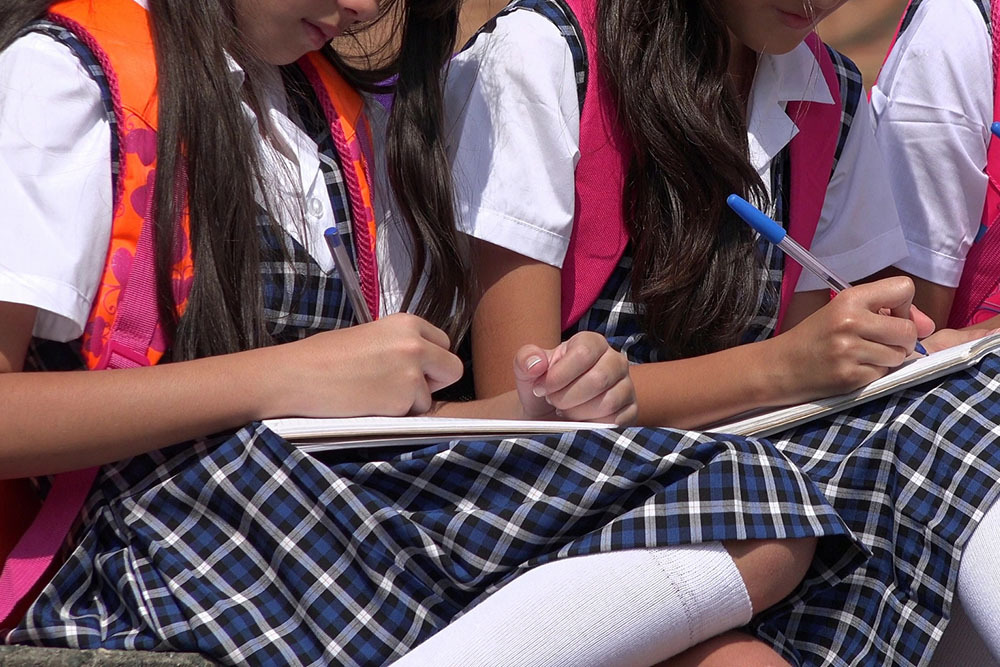 Clothing items typical of uniforms in Catholic schools, like polo shirts and plaid skirts, could be sources of high levels of toxic "forever chemicals" and pose potentially serious health risks for the millions of students wearing them, according to a new study.

A team of researchers from Indiana University, the University of Toronto and the University of Notre Dame found high levels of PFAS chemicals in school uniforms tested as part of a study published Sept. 21 in the journal Environmental Science and Technology.

Perfluoroalkyl and polyfluoroalkyl compounds, or PFAS, are human-made chemicals often referred to as "forever chemicals" because of their slow breakdown and buildup in people, animals and the environment. Some of the more than 12,000 different compounds have been linked to a number of health effects, including cancer and fertility issues in adults, and developmental delays in children. Used since the 1940s, they are commonly found in products like nonstick cookware, fast-food packaging, some personal care products, firefighting foam and textiles, especially in water- and stain-repellent items.

The study, supported by the Green Science Policy Institute, examined 72 products from nine major manufacturing brands, 34 from the United States and 38 from Canada, that were purchased between November 2020 and March 2021. The study did not specify the names of the brands. Researchers selected clothing items labeled as waterproof or stainproof, water-, wrinkle- or stain-resistant, water-repellent, windproof or easy-care stain release. Such items, they posited, were likely to contain PFAS since the chemicals are often used in outdoor clothing like jackets, rain gear and snowsuits.

Analyses of the items found high levels of PFAS concentrations in school uniforms, and roughly on par with outdoor wear that was also tested. Despite similar levels, the concern for exposure and health risk is greater with school uniforms due to their closer contact to children's skin than outer layers and the long time frames that students are wearing them, often 8-10 hours a day for a majority of the year, said Marta Venier, a co-author of the study and environmental chemist at Indiana University.

While research is limited on how much chemicals are absorbed through the skin, the study stated that chances of exposure come also through inhalation or ingestion, as children breathe the chemicals on their clothes or put their hands in their mouth or on food after touching their clothes.

Venier said that PFAS represent a different category of chemicals because of their long lifespan and more significant health impacts. "Once we have them in our body, they will stay in our bodies forever and that's why they are called forever chemicals," she said.

Approximately 25% of school children in the U.S. and Canada could be exposed to PFAS through their schools' uniform policy, researchers estimated based on 2018 data. That would include a majority of Catholic schools, where 92% have a uniform policy, according to the National Catholic Education Association. In the 2021-22 school year, more than 1.6 million children attended Catholic schools.

Venier said the PFAS levels in school uniforms were higher than researchers anticipated. They found greater concentrations of PFAS in 100% cotton and cotton-spandex uniforms than in cotton-polyester blends, likely because cotton clothing may require additional PFAS treatment to make it water-repellent or stain-repellent. The study said additional research is needed to provide more insight on the differences in PFAS levels in cotton versus other materials, as well as the degree that PFAS can absorb through the skin and how much of the chemicals is released through washing.

Venier told EarthBeat the research team hopes the study will raise awareness among parents that clothing labeled as water- or stain-resistant is likely to contain PFAS and to avoid purchasing those items. She added they hoped school administrators would reevaluate policies and contracts, and that clothing manufacturers will ultimately phase out or replace their use of PFAS.

In the meantime, Venier suggested that parents not throw out their children's uniforms, but instead when they replace items to avoid apparel labeled as stain-resistant. She added that PFAS levels should slowly decline with multiple wash cycles, which could make used clothing another option.

"Knowing what we know about PFAS and the toxic effects, we know enough. … We think that they should be removed. This is not a necessary use of PFAS. We could certainly live without stain-resistant clothes," Venier said.

"I don't think anybody would knowingly want to expose their children to a chemical that could cause cancer for the sake of making their shirt stain-resistant," he told EarthBeat.

Landrigan, who has studied how toxic chemicals impact children's health, said that like most chemicals PFAS pose greater risks to children because of their increased exposure — "they drink more water, they eat more food, they breathe more air pound for pound of body weight every day" — and due to higher biological vulnerability as their bodies grow and develop.

A July report compiled by the National Academies of Sciences, Engineering and Medicine summarized the health risks posed by PFAS. It indicated strong evidence between children's exposure to PFAS and suppressed immune systems, including reduced vaccine response, as well as decreased infant and fetal growth, liver damage and dyslipidemia, or elevated cholesterol and lipid levels in the blood.

"Those are significant harms," Landrigan said.

The epidemiologist, who was not part of the school uniform study but reviewed its findings, said "these chemicals have no place in school uniforms" and he supported the researchers' conclusion that making children's products stain-resistant should be reevaluated, or safer alternatives than PFAS should be used.

"For a chemical like [PFAS] that causes cancer, that causes problems with fetal growth, I would argue that the only safe level of exposure is zero," he said. "This is a totally unnecessary use of the chemical."

Recent legislation has sought to limit the use of PFAS in clothing and other products.

The House bill drew support from the U.S. Conference of Catholic Bishops. Ahead of its passage, the bishops in a letter to lawmakers expressed concern about the impact of PFAS on children and pregnant and nursing mothers, saying the proposed legislation "upholds the dignity of human life and preserves ecological health" by regulating PFAS, enacting drinking water standards and designating contaminated sites as eligible for Superfund cleanups.

In mid-September, the California Legislature passed the Safer Clothes and Textiles Act that bans the use of PFAS and other chemicals in the production of new textiles and fabrics beginning in 2025. Gov. Gavin Newsom is expected to sign the bill into law.

In addition to posing risks to children's health, PFAS chemicals can also be environmental threats as they are released into water, air and soil, and spread around the globe.

"It is clear that a fraction of these PFAS flows will enter the environment throughout the life cycle of a school uniform and will contribute to human and environmental exposures," the researchers said.

Landrigan said the health concerns with PFAS sheds light on a larger problem where hundreds of new chemicals enter the market each year often with little testing to determine whether they're safe or toxic.

"Historically, that's been true of chemicals like DDT and lead and asbestos," he said. Today, chemicals like PFAS are following a similar path, he added, "and we now know we're damaging kids in the womb and damaging children as they grow up."

A version of this story appeared in the Oct 14-27, 2022 print issue under the headline: 'Forever chemicals' found in school uniforms.