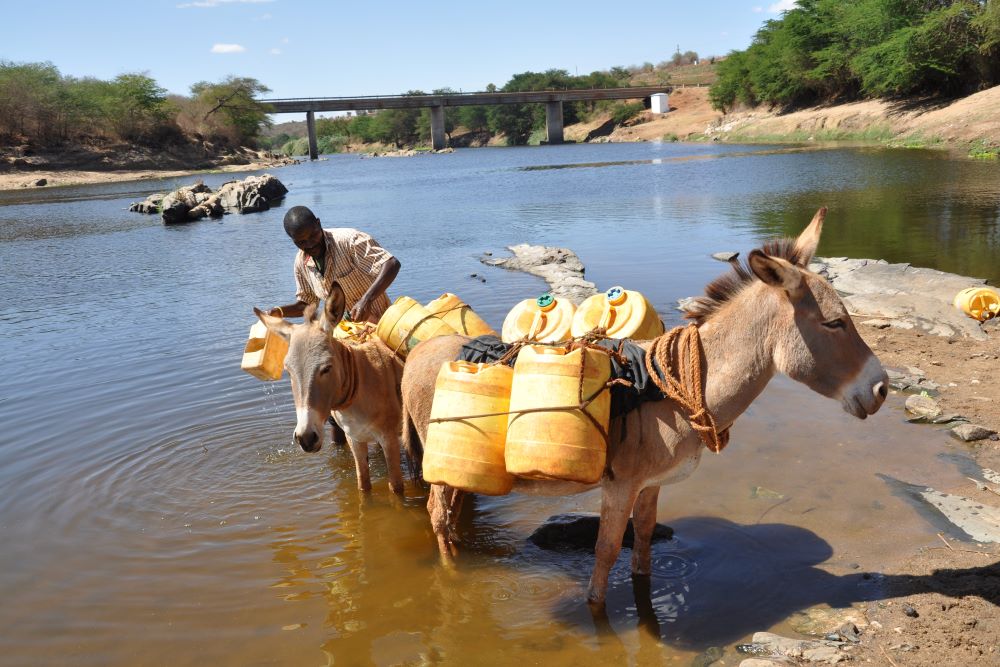 A man collects water from the Athi River near Yathui, Kenya, Oct. 27, 2021. He will use the water to irrigate crops on dry farmland. Erratic climate patterns across the African continent, including droughts and typhoons, are disrupting people's lives, especially the poor and most vulnerable. (CNS/Fredrick Nzwili)

The picture emerging from this week's major scientific report on climate change reaffirmed what Catholic development agencies have observed across the globe for years and they say supports their calls for transformational measures to reverse course and limit the suffering.

The United Nations Intergovernmental Panel on Climate Change, or IPCC, on Feb. 28 issued a sweeping report on the present and future impacts of climate change, which it said "has caused widespread adverse impacts and related losses and damages to nature and people, beyond natural climate variability." Those impacts have disproportionately impacted the world's most vulnerable people and systems, it added, and has pushed some beyond their ability to adapt.

Still, the report emphasized that humanity has the ability to change course, and that greater efforts to adapt to rising temperatures can blunt suffering. Each degree of warming avoided can lower the loss of lives and economic and social costs.

"Climate change is a threat to human well-being and planetary health. Any further delay in concerted anticipatory global action on adaptation and mitigation will miss a brief and rapidly closing window of opportunity to secure a liveable and sustainable future for all," the report authors said. 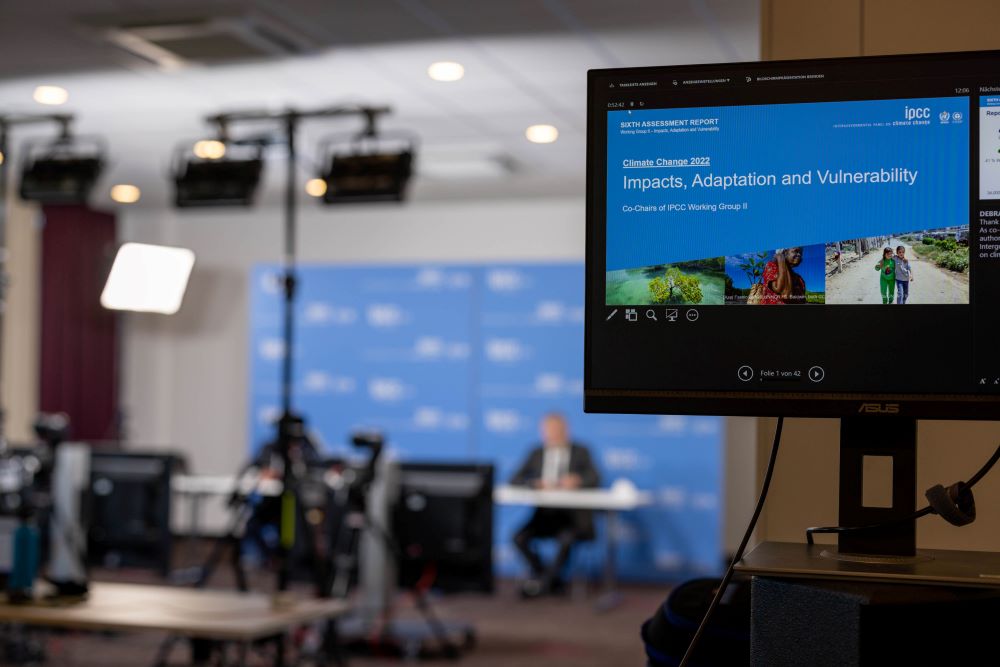 Human-driven climate change "has caused widespread adverse impacts" to both people and nature, and more than 3 billion people live in areas highly vulnerable to global warming, according to a new report from the United Nations Intergovernmental Panel on Climate Change released Feb. 28. (IPCC/Bernd Lammel)

Prepared by 270 authors, the 3,600-page report reviewed thousands of scientific studies on climate impacts, adaptation and vulnerability. It is the second issued by the IPCC in the past six months; the first focused on the physical science of climate change. A third report, on climate mitigation, will be released in April. All three are part of the IPCC's sixth assessment report, prepared to guide governments in their responses to climate change.

The report found that nearly every part of the globe and every facet of society has been impacted by climate change. It estimated more than 3 billion people live in areas highly vulnerable to climate change, and millions now face food insecurity due to rising temperatures.

In a statement, the Maryknoll Office for Global Concerns said the report "rings the latest alarm bell" for urgent action to curb global warming but also respond to mounting loss and damages.

"With a report like this, world leaders cannot say they didn’t know a deadly future is at hand," said Chloe Noel, the faith, economy and ecology project coordinator for Maryknoll. She added it "exposes what the world can no longer deny — the incalculable loss of life, culture, livelihoods and biodiversity from the climate crisis."

"How many crystal-clear red alerts on the climate crisis do we need before we take the urgent and meaningful action?" Neil Thorns, director of advocacy for CAFOD, the overseas development agency for the bishops in England and Wales, said in a statement.

Already, the planet has heated roughly 1 degree Celsius above pre-industrial levels. Government plans to reduce emissions project to hold average temperature rise to 2.7 C — well above the goals outlined in the Paris Agreement to limit global warming, which are "well below" 2 C and ideally 1.5 C. Some parts of the globe have already seen temperatures exceed the 1.5 C threshold.

'With a report like this, world leaders cannot say they didn’t know a deadly future is at hand.'
—Chloe Noel

Regions especially vulnerable to climate impacts — such as vast parts of Africa, South Asia, Central and South America, and island nations — are often parts of the world facing development constraints and where poverty, governance challenges and limited access to resources are prevalent, the report said.

The authors added that actions in the next two decades to hold temperature rise to 1.5 C "would substantially reduce projected losses and damages related to climate change in human systems and ecosystems" though not fully eliminate them. For instance, the difference between 1.5 C and 2 C could be 65 million fewer people exposed to extreme heat events every five years.

U.N. Secretary-General Antonio Guterres called the report "an atlas of human suffering and a damning indictment of failed climate leadership."

CAFOD and other Catholic development agencies said the report reinforces the need to meet the 1.5 C goal in the Paris Agreement, and also for governments to prioritize adaptation measures and financial compensation for loss and damages that have occurred.

"Climate change is real for us," said Bishop Peter Kihara Kariuki of Marsabit, Kenya, in a press release from CAFOD.

Parts of his north Kenyan region face severe drought, he said, and some people walk miles to the nearest water source.

"Suffering from the impacts of climate change, they are now dependent on aid from the church, the government, and NGOs for the basics of life: to be able to eat and drink clean water," Kariuki said.

The IPCC report stated that Africa, while responsible for just 3% of global greenhouse emissions, faces disproportionate risks, including more than half of excess deaths from climate-related illnesses and far greater exposure to extreme heat compared to other continents.

More erratic climate patterns across the African continent, including droughts and typhoons, are "creating so much havoc on many people's lives, especially the poor and most vulnerable," Fr. Germain Rajoelison of the Symposium of Episcopal Conferences of Africa and Madagascar said in a press release issued by CIDSE, a network of mostly European-based Catholic development agencies.

"Many of them are reaching the limits of adaptation," he added. 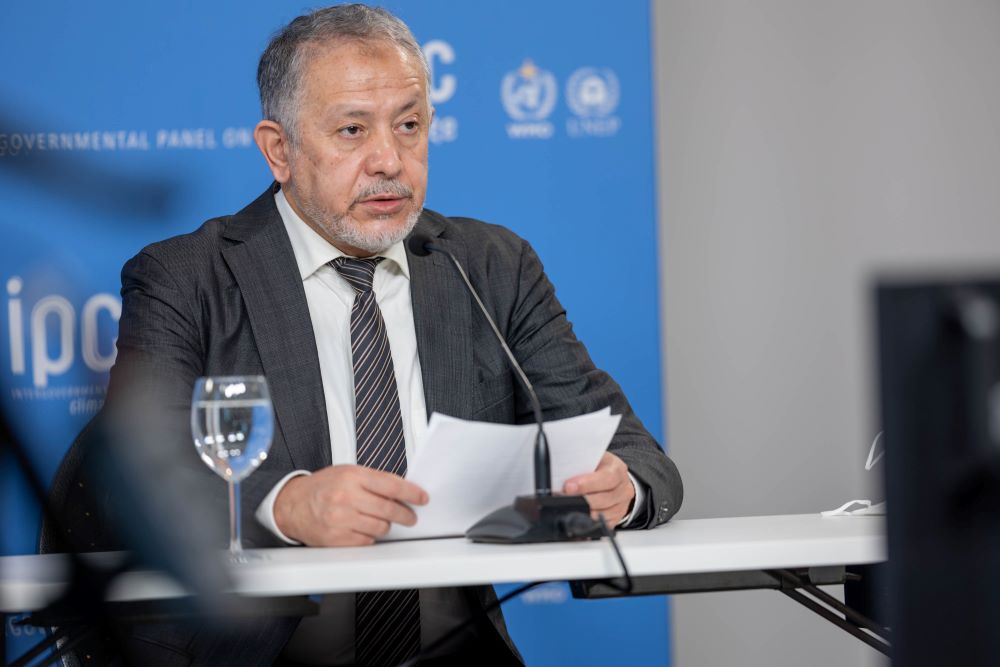 Abdalah Mokssit, secretary of the Intergovernmental Panel on Climate Change, speaks during a press conference Feb. 28 on the scientific body's report on climate change impacts and adaptation measures. (IPCC/Bernd Lammel)

CIDSE called on governments to adopt "urgent and transformative measures" to combat climate change, including greater use of agroecology techniques, increased climate finance and for nations to submit new climate pledges in line with the 1.5 C target.

Noel of Maryknoll said that the U.S., as the largest historical emitter and richest nation, has particular responsibility to lead not just in mitigating climate change by rapidly transitioning from fossil fuels to clean energy but also by helping communities and countries that are facing increasing droughts, flooding and extreme weather now.

She added that remaining dependent on burning fossil fuels for energy — the primary driver of climate change — not only puts the 1.5 C target further out of reach but "will continue to fuel violent conflicts, as we are seeing play out around the world today."

The Laudato Si' Movement said the IPCC report shows that addressing climate change must go hand in hand with efforts to safeguard biodiversity. The coalition of nearly 800 Catholic organizations encouraged Catholics to sign onto its Healthy Planet, Healthy People petition, a copy of which was delivered to world leaders at the COP26 climate summit in Glasgow and which will also be shared at the upcoming COP15 U.N. biodiversity conference scheduled for the spring in Kunming, China.

The IPCC report noted that less than 15% of land, 21% of freshwater and 8% of oceans are considered protected areas, and even in those locations, "there is insufficient stewardship to contribute to reducing damage from, or increasing resilience to, climate change."

The report found that between 3% and 14% of species face "very high risk of extinction" under a 1.5 C scenario, with more at risk as temperatures rise. The authors wrote that "safeguarding biodiversity and ecosystems is fundamental to climate resilient development, in light of the threats climate change poses to them and their roles in adaptation and mitigation."

In a press release issued by Laudato Si' Movement, Salesian Fr. Joshtrom Kureethadam, coordinator of the ecology and creation sector for the Vatican Dicastery for Promoting Integral Human Development, said the IPCC report "makes painfully clear that the cry of the Earth is at its highest pitch yet."

"God's creation is groaning for our help, and God's creation is ready to help us, but only if we are able to look beyond ourselves and care for our common home as Pope Francis calls us to do in Laudato Si'," he said.

A version of this story appeared in the March 18-31, 2022 print issue under the headline: 'Climate change is real'.