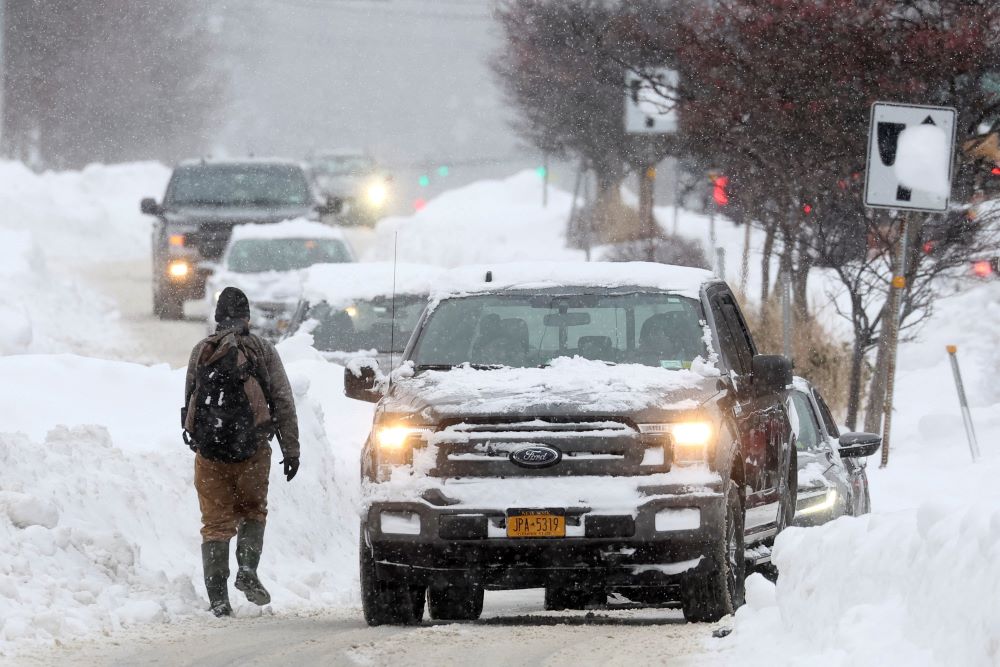 A man walks on the street as cars pass by in Amherst, N.Y., Dec. 26, 2022, during a deadly winter storm that hit the Buffalo region. (CNS/Reuters/Brendan McDermid)

As Buffalo, New York, and surrounding communities braced for a couple more inches of snow Dec. 27, after enduring 4 feet of snow dumped over a six-day period in what Buffalo's mayor called a "once-in-a-generation storm," much of the rest of the country also was digging out from record snowfall.

That included all of South Dakota, which "was very badly hit," said Clare Willrodt, director of communications and outreach at St. Joseph's Indian School in Chamberlain.

The residential school houses approximately 180 students, whom staff struggled to return to their families — many of whom live within one to two hours of the school — due to the storm.

"We were absolutely shut for four days," Willrodt told Catholic News Service Dec. 27 by telephone. "It was too difficult for staff to get to campus, and too difficult to get around campus, with the blizzard. We got down to temperatures of 40 below."

Staff managed to transport students to their homes by Dec. 19, taking advantage of a "pocket of time before the bad winds and plummeting temperatures," she said.

However, pipes at the school ruptured due to the extreme cold, with "thousands of gallons of water" flooding the basement, where classrooms and assembly areas were located.

St. Joseph's board member Larry Jandreau, the emergency services director of the Lower Brule Sioux Tribe in Lower Brule, South Dakota, said he had seen drifts ranging from 10 to 15 feet.

"We have so much (snow) piled up on the sides, and every time a plow comes through it gets higher," he said. "The winds come through and dump the snow right on the highway."

On Dec. 26, Gov. Kristi Noem activated the South Dakota National Guard to respond to the winter storms across the state by helping with snow removal and hauling available firewood from the Black Hills Forest Service to tribes in need of it.

Jandreau — whose said his community only experienced "one power glitch" at the storm's beginning — credited his state colleagues for their assistance.

"Throughout the whole storm, they were with us, asking if we needed resources," he said. "It was everybody working together, and that's God's plan."