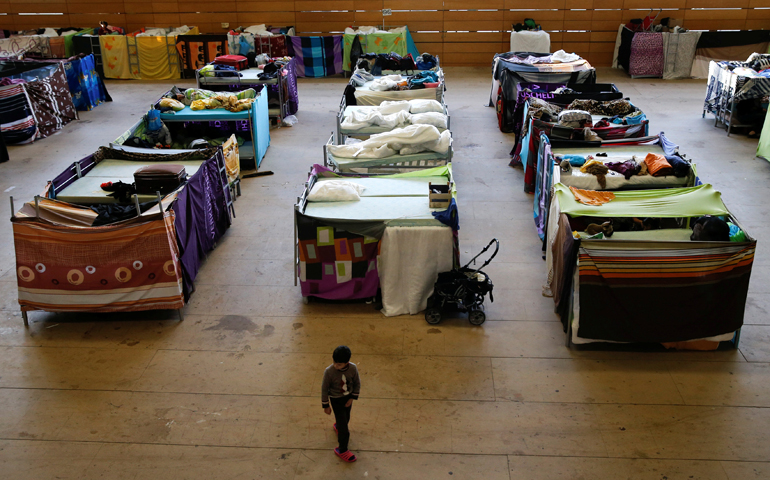 A migrant child walks in a refugee shelter in a school gym in Berlin in this Feb. 2, 2016, file photo. (CNS/Fabrizio Bensch, Reuters)

When church leaders from the Czech Republic and Slovakia met recently to discuss Europe's refugee crisis, their reluctance to help appeared to confirm a negative picture that's emerged over the past year.

The Feb. 21 meeting at the Catholic seminary in Bratislava, Slovakia, took place as human rights groups criticized East European bishops for failing to defend refugee rights, and for urging that displaced Christians be given preference in resettlement programs. But it brought no sign of a shift in attitudes, and made clear that talk of open borders would continue to be resisted.

"The current situation in the countries of Western Europe is a warning to us," said Cardinal Dominik Duka of Prague, president of the Czech bishops' conference. "The whole history of humanity shows how uncontrolled migration causes violence and conflict, as well as economic and cultural collapse."

"The larger the Muslim community, the likelier the violence — in such a situation, it's legitimate to ask about the religion these people profess, and how beneficial it is to our society," the Slovak bishops' conference president added. "We shouldn't forget that Christianity and Islam are, despite all efforts at dialogue, in permanent conflict. Once one side gains the upper hand, there's always conflict."

Although the crisis has receded from media headlines during 2017, European Union data suggest the flood of refugees is still rising, with over 370,000 people seeking asylum across the EU's 28 member-states in the third quarter of 2016. While 87,900 came from war-torn Syria, and large numbers came from Iraq and Afghanistan, the exodus is now growing from other countries too, according to the EU's Eurostat agency, which collects data from government departments.​

Since 1999, the EU has worked towards creating a common European asylum regime in accordance with the Geneva Convention via a series of directives, including the 2013 Dublin Regulation, establishing which member-state should take responsibility. However, rules and procedures have been left in disarray by the mass upsurge of arrivals since 2015, adding to pressure for aid agencies, non-governmental organizations and churches to get involved.

Catholic organizations such as the Jesuit Refugee Service and Caritas Europa have insisted migrants and refugees deserve protection, while the Commission of the Bishops' Conferences of the European Community, the Brussels-based commission representing the EU's Catholic bishops, has warned Christians they have a duty to help.

Some Catholic bishops, especially in Germany and Austria, have duly stepped up to the mark, inspired especially by a September 2015 appeal by Pope Francis for all parishes to "express the Gospel in concrete terms" by taking in at least one family.

Church sources estimate that at least 20,000 refugees are still being housed by parishes and religious orders in Germany, helped by at least 100,000 Catholic volunteers, while the church's 27 dioceses have disbursed over 300 million Euros ($318 million) in refugee aid since 2014.

In neighboring Austria, where the bishops' conference set up a website, Asylhilfe (Asylum-Help) in 2015, as well as a special coordinating group, thousands have been similarly sheltered, while the church's Caritas charity has also helped those seeking permanent residence under the country's Grundversorgungs program.

"Help for people on the run is a non-negotiable Christian duty," the conference, headed by Cardinal Christoph Schönborn, declared in a message during the crisis. "The human right to asylum is a valuable asset and an obligation under international law. It thereby allows for no compromises."

The sheer numbers, however, have placed growing pressure on national governments. Although EU heads of government agreed in 2015 to assign national quotas for refugee admissions, these have been protested by anti-immigrant groups.

Germany's Chancellor Angela Merkel set up "transit zones" for asylum applicants and imposed a two-year wait for reunifying refugee families, after more than a million entered the country in a single year. Austria began constructing fences on its southern frontiers with Italy and Slovenia, and announced plans for a parallel fence with Hungary in its eastern Burgenland province.

Such moves have been vigorously opposed by church leaders, while across Western Europe, support for refugees has remained strong in Catholic communities.

In Portugal, half of the 115 organizations and institutions now sheltering refugees are church-owned, while France's National Solidarity Council, grouping the church's Secours Catholique and other aid groups, is similarly coordinating parish responses.

"Integration and acceptance are key concerns for our societies — and Catholics have a special mission in this area," Bernhard Kellner, spokesman for Germany's southern Munich-Freising archdiocese, told NCR. "Although some groups have objected to this huge influx, there's also been a great wave of sympathy — indeed, we can say with some certainty the whole refugee aid system would have collapsed without the church's engagement."

In Eastern Europe, the reaction has been different.

Romania's bishops' conference has said little about the refugees. Bishops in Slovakia endorsed a government decision in August 2015 to bar Muslims who might "not feel at home" in a predominantly Catholic country. In the Czech Republic, where human rights groups criticized police for stamping numbers on refugees' hands, the bishops' conference's previous president, Archbishop Jan Graubner, has demanded his country take only "Christian refugees."

Even in the Polish church, traditionally noted for fierce loyalty to Rome, appeals by the pope have been treated with reserve. Bishop Henryk Tomasik of Radom, who also heads the Vatican's Pontifical Council for Pastoral Care of Health Care Workers, has insisted Poland is too poor to help, and that Polish parishes would have trouble "communicating with refugees."

Supporters of a closed-border policy say the church is reflecting public reluctance to admit Muslims, and point to U.S. President Donald Trump's efforts to bar refugees from Syria and other Muslim states. They say Merkel's open-door policy in 2015 fueled a right-wing backlash which could cost her dearly in Germany's upcoming August elections.

As in the U.S., however, human rights groups reject claims of a link between refugees and terrorism, and say hostility to Muslim refugees merely fuels intolerance — as well as disregarding the generous welcome given in the West to generations of refugees from Eastern Europe itself.

Controversy over the refugees has been most marked in Hungary, where most church leaders have avoided contesting the harsh stance of Prime Minister Viktor Orban. In 2015, when Orban warned Germany daily newspaper Frankfurter Allgemeine of a "Muslim invasion of Europe," no Catholic bishop dissented.

When work was completed on a razor-wire fence sealing Hungary's southern frontier with Serbia, and beleaguered refugees were roughed up and arrested, the bishops' conference and its newly elected president, Bishop Andras Veres of Győr, similarly said nothing.

In a keynote March 2016 speech, Orban accused "globalist schemers in Brussels" of plotting to destroy Europe's nation-states, and using the "gigantic lie" of a refugee crisis in a "treasonous conspiracy" to undermine Christianity and destroy Western civilization. The controversial prime minister has since sought to deflate criticisms by pledging to protect Europe's Christian heritage, and making his center-right government Europe's first to set up a special department to help persecuted Christians.

The tough stance on refugees has nevertheless continued.

Last September, Orban again urged priority to be given to Christian refugees and in December, after a militant Islamist attacked a Berlin Christmas market, he demanded firmer EU action to protect Christians.

After an inconclusive October referendum, the Hungarian government refused to accept a new EU quota system and gave notice it would detain any newly arriving refugees. Although some 29,432 refugees sought asylum in Hungary last year, according to official data, only 425 received any protection.

Some opposition is stirring belatedly in the Catholic church. Government billboards during last October's referendum campaign were criticized for their "anti-Gospel message" by linking refugees to terrorism and crime, while Hungary's Catholic Sant'Egidio Community has voiced "deep concern" about a planned new tightening of asylum laws. The country's Catholic religious orders have deplored the Orban government's "lack of compassion," while at least one bishop, Miklos Beer of Vác, has voiced "shame" at the silence of fellow Catholics.

"One can immediately list a thousand reasons why we want nothing to do with the refugees — that they're lazy, dirty, primitive and ungrateful, that many are certainly terrorists and Islamists, people of a different culture who don't want to integrate," the 72-year-old bishop told Hungary's Hirado TV News channel. "But we have to ask what makes us Christians, and what Jesus would have done? If He'd come knocking at our door, would we also have shouted 'keep out?' "

There've been signs of possible movement elsewhere, too.

Catholic parishes and dioceses in Croatia gave what help they could to the hundreds of thousands who transited their country in 2015 and 2016 on the "Balkan route" into Europe, while the church's Justice and Peace Commission, headed by Bishop Vjekoslav Huzjak of Bjelovar-Križevci, has joined others in vigorously asserting the duty of Christians to extend assistance.

The president of Poland's bishops' conference, Archbishop Stanislaw Gadecki, has warned those rejecting refugees that they "lack the spirit of Christ," and Cardinal Kazimierz Nycz of Warsaw urged his country's center-right government in a Lenten pastoral to open "humanitarian corridors" for refugees from Syria.

The church's Caritas organization claimed last December to have secured pledges of 18 million zlotys ($4.4 million) from Polish Catholics for refugee aid projects in Syria and Iraq. Only 1.5 million zlotys ($370,000) have been delivered, however, according to a March 6 report.

Hopes of a change of tack in Eastern Europe could have been dispelled further by the recent meeting of Czech and Slovak church leaders. The Bratislava conference was intended, according to the Slovak bishops' conference, "to look at the phenomenon of migration through the eyes of Holy Scripture, theology, sociology, political science, psychology and philosophy."

In that case, the warnings delivered by Duka and Zvolensky will have disappointed Catholics hoping for a more generous, trustful and inclusive attitude from their bishops.

[Jonathan Luxmoore is a freelance writer covering church news from Oxford, England, and Warsaw, Poland, and serving as a staff commentator for Polish Radio. He is the author of several books, including a two-volume study of communist-era martyrs, The God of the Gulag (Gracewing, 2016).]