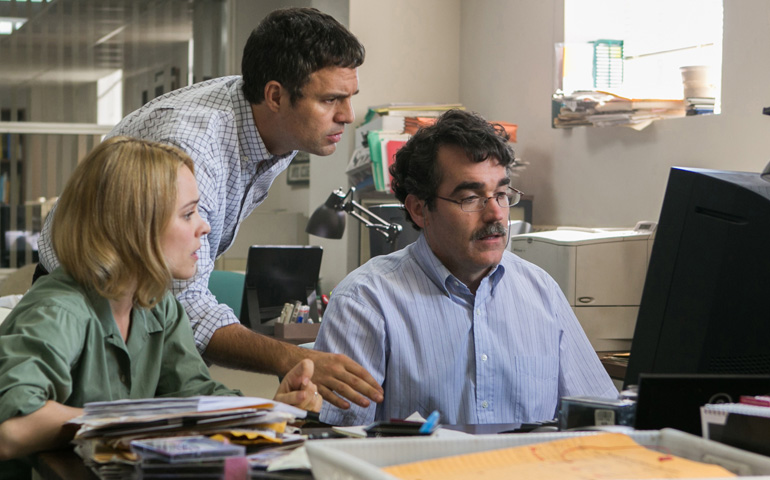 With "Spotlight" awarded the Oscar for best motion picture, the public humiliation for the Catholic church is now as thorough as one might expect in a culture where what is on screen is often the most persuasive element in fashioning public opinion.

In the case of priests sexually abusing children and bishops and others hiding their crimes, the biblical resonance might now finally be felt: the first have been ushered, publicly, to their place in the last seats. The last have been made first -- and given a special place (even on stage with Lady Gaga). No longer need victims hide or fear to explain themselves. The mighty, indeed, have fallen from their thrones; the humble have been exalted.

As Barbara Blaine, founder of Survivors Network of those Abused by Priests, said on Oscar night: "Exposing hundreds of thousands of people across the planet to a compelling, reality-based film about this crisis -- people who might otherwise not pick up a book, go hear a speech or search the Internet for information about abuse -- is, in itself, an incredible achievement and a real, life-changing 'win' for countless children."

The movie powerfully illustrates what the church utterly failed to realize about itself: that the act of abuse, horrible as it is in any circumstance, was magnified in its unspeakable specifics because an all-male, celibate culture was so protective of its own status and privilege, so closed in on itself, that it was deaf to the searing pleas of children, parents, congregations and the few souls within its ranks who dared to speak the truth.

In the end it was, indeed, about a "system," one presumed to be about the pursuit of holiness, that turned out to be despicably corrupt. It took outsiders -- journalists, particularly -- to question the institution’s rationale and turn it on its head. It took as well those who removed themselves from the worst of the clerical culture, notably Dominican Fr. Thomas Doyle, who understood he was dooming his clerical career when he decided not to turn away from victims, and former Benedictine priest Richard Sipe, a psychotherapist who deeply studied the priesthood and understood the dynamics of the scandal.

Most of all, it took the courage of victims who came forward and withstood the often withering arrogance of bishops and their lawyers who tried to dismiss the disturbing truth.

Much remains to be done at multiple levels, especially in assuring survivors of paths to healing. But for those who, for very understandable reasons, might never sit with the millions of words that have been written about the scandal, the miles of documents that have been unearthed, nor hear the endless hours of testimony accrued over three decades, "Spotlight" provides a way to quickly grasp the essential reality of this chapter of church life.

The humiliation is stunning and fitting, given the immensity of the betrayal. It is no small irony that the Academy Awards, often a display of cultural superficiality, should be the vehicle for this Lenten truth.

What Hollywood can’t do, of course, is tap into the church’s sacramental tradition, wherein one finds all of the resources necessary to understand the humiliation and to use it as a point of conversion. Bishops and the rest of the clerical culture have the language and the training to understand that sacramental tradition and the need for true repentance. Here and there we see individuals making this attempt. But a community-wide effort has never been attempted. Writing to this newspaper in July, Bishop Edward J. Burns of Juneau, Alaska, chairman of the U.S. bishops’ Committee for the Protection of Children and Young People, made mention of this:

We should not regard the clerical sexual abuse scandal as a distraction from the church’s mission, as if, once we have somehow "rectified the problem," we can continue on as before. Rather, our shepherds, myself included, need to face and repent of the betrayal of trust. Authentic and heartfelt repentance by the shepherds of our church is not a distraction from our mission: It is the mission at this moment in the life of the church and her leaders.

The community yearns for healing. We wait to see if today’s church leaders have the will to truly engage this moment in the life of the church.

*An incomplete draft of this editorial was published earlier today. This is the complete, final version of the editorial.