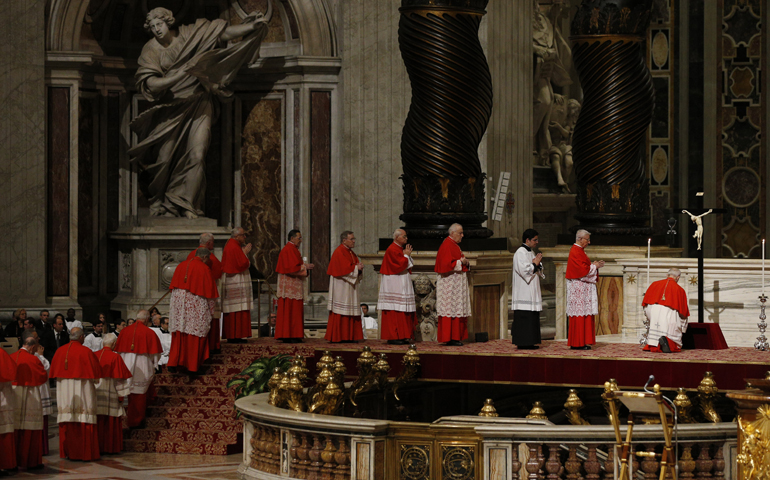 Rarely is change in the church proclaimed with any fanfare. The daily Vatican bollettini don't announce policy changes; members of the Curia aren't invited to seminars on "new directions" for the church. Catholics are left to discern newness in other ways, like noticing the first hint of a changing season in the subtle alteration of sunlight.

The light's angle just became a little clearer with Pope Francis' appointment of 17 new cardinals from 11 different countries, including three from the United States. These appointments should dispel any doubt that a new season is upon us, one that expands our views of the peripheries in several ways: in terms of geography, in terms of what sees are considered important, and in terms of how leaders think about and approach building the church in this era of Francis.

Expansion of the College of Cardinals, particularly for areas of the developing world, has been underway for some time, but Francis has taken that project to a new level, appointing in 2014 a cardinal from Burkina Faso and another from an obscure diocese in Haiti.

This time around, 11 of the cardinals named came from places that never before had a cardinal, including Bangui, Central African Republic; Dhaka, Bangladesh; Mérida, Venezuela; and Tlalnepantla, Mexico.

Francis is walking past some of the old established sees that expect to have a cardinal at the helm. He is going to the peripheries of the church, selecting leaders who understand by experience the pastoral needs of the poor and how the church operates far away from the entrenched palace culture of the Vatican.

In the United States, the change of seasons is apparent with the selections of Chicago Archbishop Blase Cupich, Indianapolis Archbishop Joseph Tobin, and Bishop Kevin Farrell, last of Dallas and just appointed to head the newly created Vatican Dicastery for Laity, Family and Life.

It is not a surprise that Farrell and Cupich will receive red hats. It's a natural move for Farrell since he will be a Vatican official and for Cupich because Chicago's archbishop traditionally has been named a cardinal. The surprise was in their initial appointments -- clear signals that Francis was selecting men who rejected the culture-warrior model and exemplified a pastoral, not a legal, approach to church leadership.

The real surprise was the choice of Tobin. Philadelphia and Baltimore, traditional cardinalatial sees, were overlooked yet again, this time in favor of Indianapolis, an archdiocese that has never been represented in the College of Cardinals.

Tobin, a member of the Redemptorist religious order, is in many ways a leading indicator of the change afoot. He became head of the Vatican's congregation for religious when the investigations of the U.S. women religious were already underway. It is said that he argued against the investigations and lost that fight, but retained the respect of Pope Benedict XVI, who appointed him to Indianapolis.

The combination of Cupich, widely regarded as a model of pastoral leadership, with Tobin, means that the U.S. Conference of Catholic Bishops will now have among its members two more cardinals who strongly represent Francis' vision of church leadership. That is significant, given the resistance to adopting Francis' approach, evident in the bishops' recent national meetings.

In his 2014 address to the U.S. bishops in Washington, Francis insistently called for dialogue -- in all directions and with everyone -- and rejected "harsh and divisive language" while appealing for a culture of encounter among church leaders. It was a clear repudiation of the kind of leadership that had been ascendant in the U.S. church for decades and under which the church had experienced significant losses of traditional members and their children. The losses were not felt as keenly in some places because of demographic shifts nationally and because of an influx of immigrants.

The church, however, faces a headwind of crises in the coming years, the principal one stemming from the decline in the number of priests and sisters since the 1960s. Nuns and priests provided a workforce for the local communities from the mid-1940s to around the mid-1960s. It turns out that those years of full convents and rectories, often viewed as a norm to replicate, were actually an anomaly. Such numbers never existed prior to that period and the demographers are fairly certain they will not occur again. In 2009, researchers at the Center for Applied Research in the Apostolate (CARA) at Georgetown University projected that half the priests available for service at that time would be either retired or deceased by 2019.

If the Catholic community in the United States is to survive as a coherent community, it will require leadership able to imagine new forms and structures to sustain the church in this new reality. It will take pastors such as Cupich and Tobin, leaders who have shown themselves to be unafraid of the new questions and willing to accompany the flock in order to understand its needs.

Diktats from the pulpit and the threat of law will not inspire people to holiness or lead them to take a seat in the pews. Francis' deep insight is his recognition of the need for a theology of accompaniment. It is a new season, not fully in bloom, but well underway.

A version of this story appeared in the Oct 21-Nov 3, 2016 print issue under the headline: Editorial: Cardinals herald church's changing season.