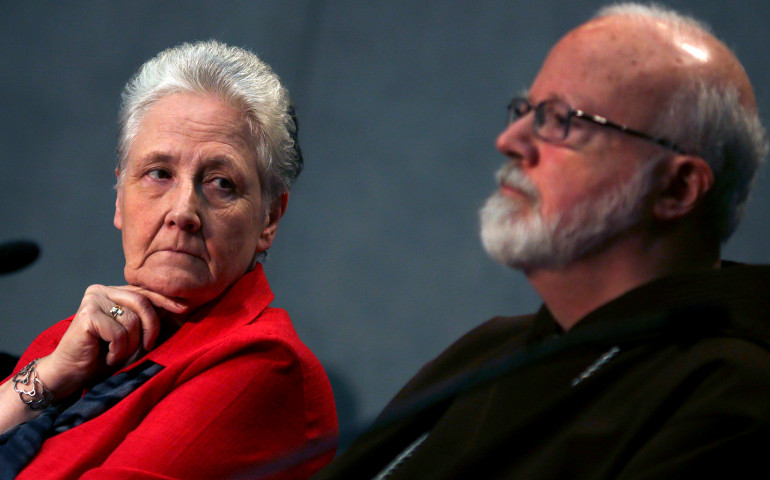 Irish abuse victim Marie Collins looks at Boston Cardinal Sean O'Malley during the first briefing of the Pontifical Commission for the Protection of Minors at the Vatican May 3, 2016. (CNS/Reuters/Alessandro Bianchi)

The resignation of Marie Collins from the Pontifical Commission for the Protection of Minors is a turning point in Pope Francis’ pontificate. It cannot be seen any other way. For all the hope and promise that we find in Francis and his vision for the church, we believe his pontificate teeters on the brink of failure on the issue of sexual abuse by the clergy.

For three and a half years, Francis has promised to take real action to bring accountability to the highest structures of the church and to help heal survivors. Now the commission he created to do that must confront serious questions about its credibility.

For his part, Francis must take some decisive, public action here. He must empower the commission with authority — a fully functioning commission cannot operate without a budget, permanent staff and the power to hire outside expertise. Beyond that, Francis must act to guarantee that the Vatican dicasteries and their personnel cooperate fully with the commission. Those who deliberately frustrate the commission’s work, no matter what level of the Curia they represent, must be replaced with personnel who will claim the eradication of this scandal as part of their mission.

But something deeper is at play here. If all we get are stronger managerial presences and dedicated staff and office space, we may not get the full reform of structures this issue calls out for. A resistance to change that is planted deep within the all-male clerical culture is the largely unaddressed issue at the heart of the scandal and has been since the first major story about it appeared in these pages more than 30 years ago.

Bishop Vincent Long Van Nguyen states this clearly, but Australia has been through three years of public soul-searching that others in the church have avoided. Francis’ urgent task is to change this elite, clerical culture. He has been outspoken on this, but now is the time for action.

We should stipulate a few points here for those who might still think that calling out the clerical culture once again is overstating the matter. It is clear that sexual abuse of children does not happen solely, or even primarily, within the confines of the Catholic priesthood. In fact, most abuse occurs in the wider society and in family settings among those whom children are taught to trust.

Abuse within the Catholic church, however, is a unique crime — and sin — for several reasons having to do with the clerical culture.

First, the perpetrators claim, by dint of ordination, an ontological difference from the rest of humanity, a separateness expressed in the belief that they stand “in persona Christi,” specially anointed channels of God’s grace and forgiveness.

Second, the perpetrators belong to a closed and exclusive culture, with its own archaic laws and largely hidden legal proceedings, a culture that enjoyed enormous deference from law enforcement and the courts as well as from ordinary Catholics.

Finally, the culture was long led by men who, it has been shown beyond any dispute, looked first to the preservation of their privileged status and the reputation of their culture before taking into consideration the deep destruction occurring to the most vulnerable in the community.

What we know now is that all of the emotional and intellectual investment of victims, all the lofty words and intentions of countless bishops forced to acknowledge the deep corruption of the institution, all of the straining for some manner of justice by those in the wider, secular culture, mean nothing inside the community if the clergy culture continues to refuse to confront itself and its entrenched and unyielding role in sustaining the sexual abuse scandal.

There is no denying the progress — and Collins herself gives high marks to Francis for dealing forcefully with the problem at the top level of the church. But if, as she reports, his efforts are consistently frustrated at lower levels, nothing will change.

We are at a crucial point when it comes to the issue of clergy sex abuse. Yes, the buck stops with Francis, but the burden is not just on the pope but also on everyone inside the Vatican to forcefully address the repercussions of past abuses and wipe out the atmosphere that has allowed this crime, and this sin, to occur for centuries.

What is necessary to finally put this scandal behind us is a chorus of clerical voices demanding reform of their own culture, demanding that the all-male clerical caste engage in the painful work of understanding what their culture has become, how it could be so deformed that it was able to justify what some have termed the “soul-killing” of the community’s children.

It is that culture that thwarts the work of the pontifical commission and that led to Marie Collins’ resignation. And until that culture changes, children will remain in harm’s way within this church.