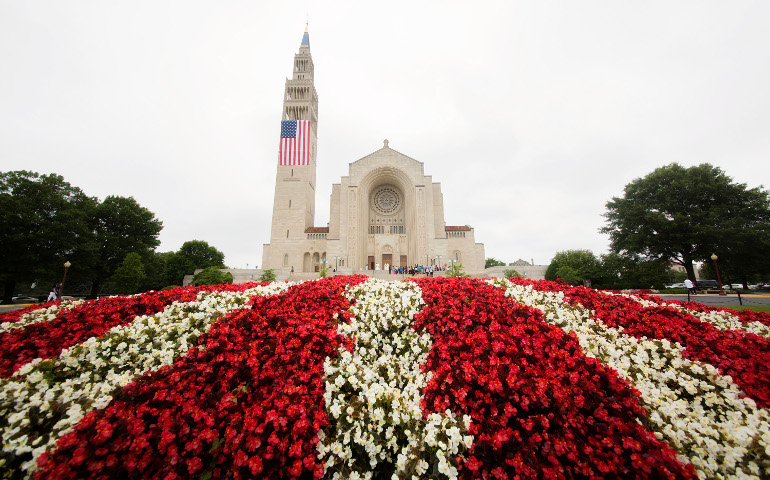 The Basilica of the National Shrine of the Immaculate Conception in Washington is seen July 4 prior to the closing Mass of the Fortnight for Freedom. (CNS/Jaclyn Lippelmann, Catholic Standard)

The recent article in the Italian Jesuit magazine La Civiltà Cattolica, a stinging critique of the “strange form” of ecumenism that exists between some conservative Catholics and fundamentalist evangelicals, provides a welcome and overdue reality check on what has become a staple of U.S. politics.

Since the rise of the religious right in U.S. politics in the late 1970s, religion has been wrapped around national ambitions that have relied on war-making and accumulation of others’ national resources and on campaigns against perceived threats from the LGBT community, Muslims, and assorted migrant and refugee populations.

The article, “Evangelical Fundamentalism and Catholic Integralism in the USA: A Surprising Ecumenism,” pokes holes in that religious veneer — too often a malleable, Christian-tinged religiosity — and names its characteristics most at odds with Catholic teaching:

• “It does not take into account the bond between capital and profits and arms sales,” write the authors. “Quite the opposite, often war itself is assimilated to the heroic conquests of the ‘Lord of Hosts’ of Gideon and David. In this Manichaean vision, belligerence can acquire a theological justification and there are pastors who seek a biblical foundation for it, using the scriptural texts out of context.”

• The “strange form” of ecumenism also fashions “a sort of ‘anesthetic’ with regard to ecological disasters and problems generated by climate change,” rationalizing its position from a “literalist understanding of the creation narratives,” subjecting creation “to human will in biblical submission.”

• The writers follow the narrative from Pastor Rousas John Rushdoony, father of dominion theology, a belief of some highly ideological and extremely conservative Christians that they have a mandate to take dominion over the earth spiritually and politically. They see a U.S. theocracy in the future. The Rushdoony doctrine “feeds political organizations and networks such as the Council for National Policy and the thoughts of their exponents such as Steve Bannon,” President Donald Trump’s chief strategist.

• The article also takes on an extension of evangelical fundamentalism — and Catholic cooperation with it (think the Napa Institute and its wine-drenched, luxury-resort religious conferences) — the prosperity gospel. The prosperity gospel is an American original that perhaps is one of the greatest distortions of the Christian endeavor, in which grace equals wealth. The article further critiques the “particular form of proclamation of the defense of ‘religious liberty,’ “ when it is distorted to mean “religion in total freedom,” an idea used as a direct “challenge to the secularity of the state.” We hope that the U.S. bishops, who have been pounding that very theme — religion in total freedom — take notice.

The Civiltà Cattolica article is significant for several reasons. Editor in chief Jesuit Fr. Antonio Spadaro, one of the authors, is a close associate of Pope Francis. Marcelo Figueroa, a Presbyterian pastor in Argentina, is editor of that country’s edition of the Vatican newspaper L’Osservatore Romano. The magazine itself, historically quite important, is reviewed by the Vatican before publication.

The distortion of Christianity in America for political purposes took hold in its latest form with the development of the religious right in such organizations as the Rev. Jerry Falwell’s Moral Majority, Ralph Reed’s Christian Coalition and a host of satellite organizations zeroed in on specific issues.

One of the clear markers of Catholic complicity in the politicization of the faith was the 1994 document “Evangelicals and Catholics Together.” The document itself had the high gloss of purpose and theological language that only the late Fr. Richard John Neuhaus could bring to it. It was, at bedrock, a political document that now serves as an example of the reductionism necessary to engage in such an effort.

The title itself suggests something momentous involving two large religious bodies in the United States. In reality, the document, evident in its signatories, is the work of very narrow representations of each group, the segment on the outer conservative edges just before the landscape fades to irrational extremes. Its language would lead some to conclude that in the Catholic and evangelical world there was no alternative to the political positions and strategy outlined in the document. None of that, of course, is true, but in the moment it is often difficult to argue with such authoritative-sounding certitude.

Catholics and evangelicals, both groups far more textured and diverse in view and imagination than that document would suggest, were ill-served by it.

One of the most significant aspects of the Francis papacy has been his willingness to pull back the façade of so many institutional presumptions — the Curia, priestly training, the nature of the episcopacy, legal rigorists and absolutists among them — to reveal a deeper truth. Often the revelations raise more challenges to the Catholic community to work toward greater authenticity and truth.

In recent decades, too many of our bishops and those who staff their offices have conceded to the vision of ideologues in think tanks and institutes with an absolutist and narrow agenda. As a result, they have squandered their standing and credibility in the wider culture. It is time the church regain its balance and earn anew legitimate authority in the political arena. The Civiltà Cattolica article would be a good starting point for discussing how to proceed.