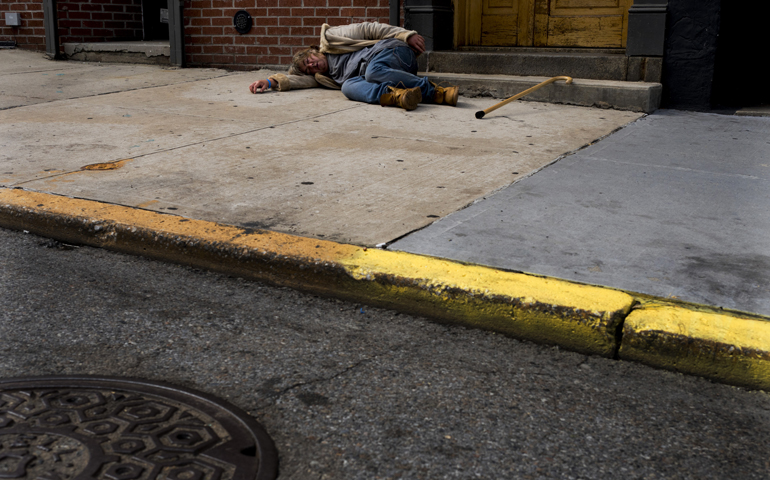 These insightful words from Miami Archbishop Thomas Wenski, chair of the U.S. bishop's Committee on Domestic Justice and Human Development, strike at the heart of the problem of poverty today in the United States. Nobody wants to talk about it.

Twenty years after President Bill Clinton ushered in a new era of welfare reform, we are reminded of the scriptural truth that the poor are with us always. Instead of seeing that as a challenge, our society has taken it as an inevitability, and seemingly candidates running for elected office either don't want to touch the issue or don't know what to do about it.

Major political parties focus on rhetoric that aims at soothing the middle class: promises of high-tech manufacturing jobs or restoring steel and coal jobs. Work in these fields makes up just 10 percent of the labor force. What about the vast majority of workers who toil in the service industry, most often at below a living wage? The lack of opportunity and the acute fear among working-class folks of losing what they have, a loss that is often one illness or one recession away, fuel the anger that fuels the current presidential campaign.

Since 2011, faith-based organizations like Catholic Charities USA, the U.S. Conference of Catholic Bishops, Sojourners and Bread for the World have rallied behind an ad hoc coalition called the Circle of Protection. Formed amid a scorched-earth budget battle between the Republican-controlled Congress and the Obama administration, this coalition fought mightily to save poverty programs -- like the Children's Health Insurance Program, food stamps and school nutrition programs -- from major reductions. For the most part, this has worked.

Even with the Circle of Protection, the most vulnerable among us are not faring all that well. About 3.55 million American children live in households with incomes of less than $2 per person per day, which is the measure of extreme poverty used by international development agencies. This data comes from the recent book $2.00 a Day: Living on Almost Nothing in America, by Kathryn Edin and Luke Shaefer, which traces this rise in extreme poverty.

Edin, a sociologist at Johns Hopkins University, spelled out for Catholic News Service the consequences of ignoring poverty. People aren't linking "what's happening in our cities to the unbelievable disparities we're seeing across the country," Edin said.

"Why did Baltimore burn? What's going on in Milwaukee, Ferguson? It's not frustration with the police, while that's important. It's anger and dissatisfaction with the lack of opportunity and living in poverty," she said.

Since the launch of this presidential election cycle a year ago, the Circle of Protection coalition has sought "a new bipartisan dialog on what it will take to end hunger and poverty." In July, the group reached out to the presidential candidates asking to meet with them. Progress against poverty and hunger won't happen "unless our next president takes a strong leadership role in making that progress a priority," they said. The group has heard from one of the campaigns, but to date none have set meetings.

Those of us who want action on poverty as a national priority can do two things ahead of Election Day. When interacting with political campaigns, encourage the presidential candidates to meet with leaders of the Circle of Protection, and encourage other national office candidates to do the same.

Political scientists tell us that politicians don't talk about people living in poverty because such people as a group don't vote. So join a local voter registration drive. PICO National Network, a faith-based organizing network, and its "Together We Vote" campaign, is one example. (See www.piconetwork.org/campaigns/together-we-vote.) Registering more voters from among people living in poverty will give the politicians a reason to talk about poverty.

A version of this story appeared in the Sept 9-22, 2016 print issue under the headline: Editorial: Make action on poverty a national priority.