Skip to main content
News
Opinion
Editorial
This story appears in the NCR's Person of the Year feature series. View the full series. 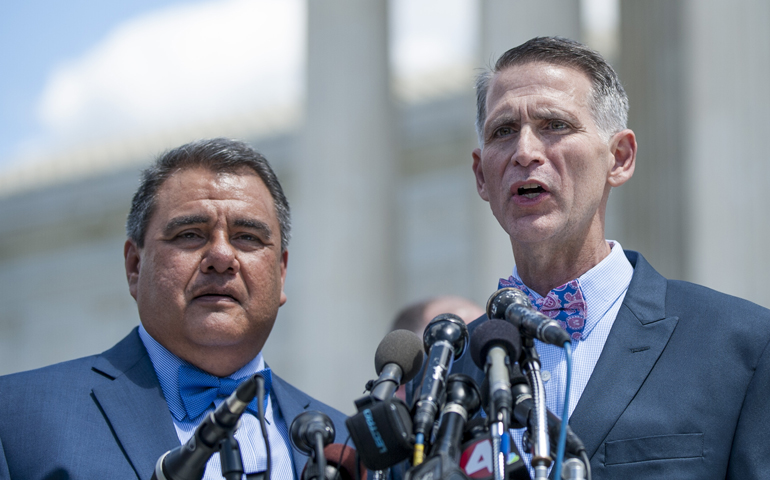 As we live through them, it is often difficult to rec­ognize truly important, history-changing events, events that will touch future generations intimately and profoundly. Very likely, though, the U.S. Supreme Court decision of June 26, 2015, in the Obergefell v. Hodges case, which found same-sex marriage a con­stitutional right, is one of those events.

"The nature of marriage is that, through its en­during bond, two persons together can find other freedoms, such as expression, intimacy, and spiritu­ality. This is true for all persons, whatever their sex­ual orientation," Justice Anthony Kennedy wrote for the 5-4 majority.

Catholic moral theologian Lisa Fullam was struck by "how strongly" the four principles and traditions the court cited as the foundation for its decision "echo Catholic doctrine on marriage."

As the church formulates a response to this new reality, she suggested, "a good first step for Church leaders would be to applaud the Court's decision in light of its overlap with Catholic values … and take note of the powerful spirit of love and commit­ment vivifying lesbian and gay marriages as well as straight marriages."

The divided court, though, reflects divides in the nation. The day of the decision, NCR reported that the political and religious response ran the gamut from despair and anger to jubilation.

The court's decision did not surprise Philadelphia Archbishop Charles Chaput, he said. "The surprise will come," Chaput continued, "as ordinary people begin to experience, firsthand and painfully, the im­pact of today's action on everything they thought they knew about marriage, family life, our laws and our social institutions."

Marianne Duddy-Burke, executive director of Dig­nityUSA, on the other hand, celebrated "the increase in justice that this ruling ushers in" and noted that Catholics were at the forefront of the marriage equality movement. "Our commitment to the values of love, inclusion, family, and justice have inspired millions of Catholics -- both straight and LGBT. … It is wonderful to see the true values of our faith and our country affirmed today."

Between exuberance and bitter disappointment lies a vast middle ground, the ordinary days that suc­ceed the history-changing event, as we truly begin to live this new reality.

The question remains whether these days will be painful as Chaput suggests or, as Arthur Fitzmau­rice, resource director for the Catholic Association for Lesbian and Gay Ministry, told NCR June 26, "a chance for us to step away from the charged political debate to a pastoral dialogue on what it means to be LGBT and Catholic."

Changing the law was a one-time event. Change comes to peoples and communities slowly. As ordi­nary people -- and one hopes Catholic bishops -- come to know more people in same-sex marriages, hearts and minds will change. Acceptance will re­place fear.

One Catholic couple who can -- and do -- tell the story of the benefits of same-sex marriage are Greg Bourke and Michael DeLeon of Louisville. In a com­mitted relationship for 33 years (and married in Can­ada in 2004), Bourke and DeLeon are lifelong prac­ticing Catholics and active members of Our Lady of Lourdes Parish for 28 years. Together, they are rais­ing two children. By all accounts, they have become vital to their community.

Interviewed by the Huffington Post last March just before the Supreme Court heard oral arguments in Obergefell v. Hodges, Fr. Scott Wimsett, pastor of Our Lady of Lourdes, described Bourke and DeLeon as "loved and respected. … You see how they fit in."

The reporters had met Bourke and DeLeon as they were taking orders and serving meals at a parish Lenten fish fry.

"They're just good people," Wimsett said. "And that's kind of what it's all about, isn't it?"

The timing of that story is important, because Bourke and DeLeon were lead plaintiffs in the Su­preme Court case.

Bourke and DeLeon had their marriage involun­tarily thrust into the spotlight almost four years ago when Bourke lost his position as a Boy Scout troop leader because of his sexual orientation. Bourke had volunteered with the troop sponsored by his parish for eight years, six as a registered leader. His oust­er was widely reported in the local media, which brought the couple to the attention of the Louisville legal team looking for plaintiffs to challenge Ken­tucky's marriage equality ban.

Bourke and DeLeon agreed, and, well, history was made. But the story doesn't end there.

In July 2015, with same-sex marriage legal nation­wide, the Boy Scouts of America rescinded its ban on gay adult leaders and Bourke reapplied for lead­ership with his son's troop. In August, he was reject­ed again, this time not by the Boy Scouts but by his parish.

When the Boy Scouts lifted its ban on gay adult leaders, it included a provision to allow church-spon­sored units to choose local leaders based on church teaching. Bourke learned that Louisville's Kurtz had instructed pastors to continue the ban on gay leaders in parish troops.

"My heart is broken that my church would now present the barrier to my returning to my Boy Scout unit," Bourke wrote on his Facebook page.

Bourke and DeLeon are lucky in that they are only parishioners and volunteers. Their livelihoods do not depend on the institutional church. In 2015, at least 10 church employees in the United States lost their jobs because of sexual orientation. In nearly all cases, these were long-standing employees who were deeply respected by their school and parish commu­nities. In most cases, their orientation and even their partners were known by the community. They expe­rienced no difficulties until they entered civil mar­riages.

NCR is already on record advocating for church personnel policies that ensure that employees can en­ter into legal, civil marriages without fear of losing their jobs.

Related: Editorial: Gay marriage should not be a job impediment

Today, we address a more fundamental issue: How will we as a church live with our gay, lesbian and transgender brothers and sisters? We are past the time of "love the sinner" platitudes.

Some Catholic leaders have expressed a willing­ness to find a way through this time of change, rec­ognizing that all change is difficult. Bishop Gregory Hartmayer of Savannah, Ga., urged calm and civil­ity after the June 26 decision, denouncing before­hand "venomous language or vile behavior against those whose opinions differ from our own." He not­ed that the decision "is primarily a declaration of civil rights and not a redefinition of marriage as the Church teaches."

Chicago Archbishop Blase Cupich called for "ma­ture and serene reflections as we move forward to­gether." He noted that the wisdom of the Catholic church is "rooted in faith and a wide range of hu­man experience." He quoted the Catechism of the Catholic Church that gay persons "must be accepted with respect, compassion, and sensitivity. Every sign of unjust discrimination in their regard should be avoided." He continues:

This respect must be real, not rhetorical, and ever reflective of the Church's commitment to accompanying all people. For this reason, the Church must extend support to all families, no matter their circumstances, recognizing that we are all relatives, journeying through life un­der the careful watch of a loving God.

Reflective of this time of change, Cupich has his own challenges. The Chicago archdiocese is the sub­ject of two complaints filed with the Illinois Depart­ment of Human Rights and the federal Equal Em­ployment Opportunity Commission alleging unfair dismissal based on sexual orientation.

Bourke and DeLeon are emblematic of this major challenge facing the church today, because they force us to ask not how will we live out a hypothetical situ­ation, but how will we live with Greg and Michael. They give flesh to an abstraction.

The answers the church is giving now are con­fused, uneven and often cruel. Greg and Michael -- and countless gay, lesbian and transgender Catholics -- deserve better.

For their historic roles as plaintiffs in Obergefell v. Hodges and for their faithful public witness as gay Catholics, we name Greg Bourke and Michael DeLe­on NCR's persons of the year for 2015.