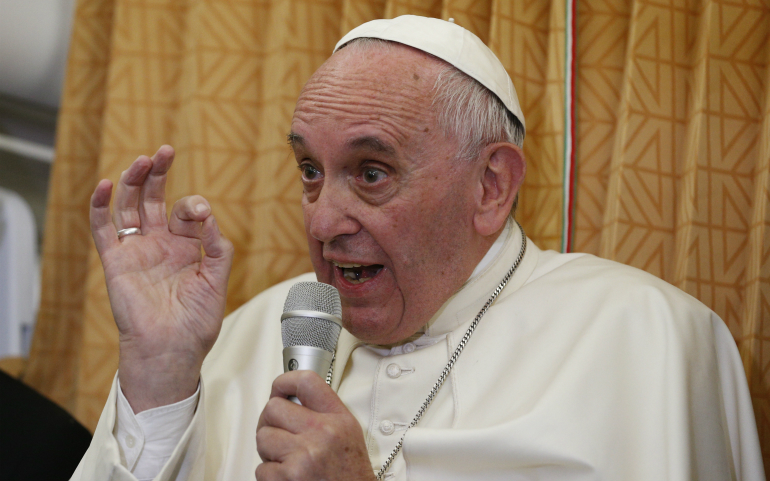 Pope Francis has said that Catholics must discern difficult situations of sexual morality on a case-by-case basis, even when presented with a person who is considering or has had gender reassignment surgery.

In a lengthy press conference aboard the papal flight back to Rome Oct. 2 after a weekend visit to Georgia and Azerbaijan, the pope said "you must take things as they come" and give time to accompany and discern individually with the various situations people are facing.

Francis recounted a meeting at the Vatican he had last year with a Spanish transgender man who had written to the pontiff to describe his own case and had asked for a personal encounter together.

The woman, Francis said, had undergone gender reassignment surgery and had then married a woman. "He wrote me a letter saying that, for him, it would be a consolation to come [see me] with his wife," the pope said, clarifying: "He that was her but is he."

The pope said that during the meeting the transgender man spoke of his experience in his parish in Spain, where a younger priest had recently replaced his former pastor, who had turned 80.

"When the new pastor would see him, he would shout to him from the sidewalk: 'You will go to Hell.'" Francis said. "But when the old pastor would come find him, he asked: 'How long has it been since you confessed? Come and confess so you can have communion.' "

"Do you understand?" the pope asked the journalists aboard the flight. "Life is life and you must take things as they come."

"We must be attentive, not saying all are the same," he continued. "Every case: Welcome it, accompany it, study it, discerning and integrating."

"This is what Jesus would do today," said the pope.

Francis spoke about transgender people in response to a question from a journalist about his frequent criticism of what he has called "gender theory." In a meeting with Catholics in Georgia Saturday evening, the pontiff had called gender theory "a great enemy" of marriage.

During the press conference, the journalist asked what the pope would say to someone who had struggled for years with their sexuality and felt that their physical appearance did not correspond with their sexual identity.

Francis first responded by revealing that as a priest, bishop "and even as pope" he has accompanied gay people in trying to help them get closer to God.

"People must be accompanied, as Jesus accompanied," the pope continued. "When a person who has this situation comes before Jesus, Jesus will surely not say: 'Go away because you're homosexual.' "

Continuing to explain his views on so-called gender theory, the pontiff made a distinction between what he called "indoctrination" of young persons and accompaniment of people in pastoral situations.

Francis recalled a conversation he had with a French father whose ten-year-old son had told him he wanted to be a girl when he grew up.

"In their schoolbooks gender theory was being taught," said the pope. "This is against natural things."

"It is one thing for a person who has this tendency ... and also changes their sex," the pontiff continued. "It is another thing to teach in schools along this line. Changing the mentality: I call this ideological colonization."

Francis also spoke at the press conference about the upcoming U.S. election and his travel plans for 2017, and he gave hints to when he might create more cardinals for the Catholic church.