Skip to main content
Vatican
News
This story appears in the Francis in Georgia and Azerbaijan feature series. View the full series. 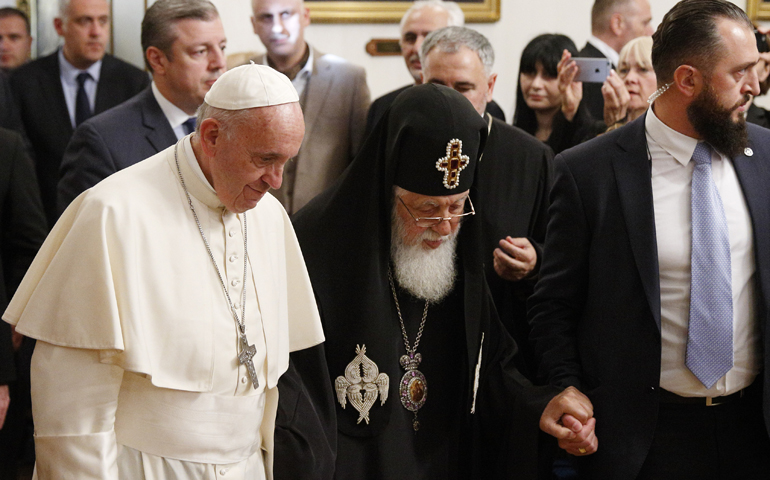 Pope Francis and Orthodox Patriarch Ilia II of Georgia arrive for a meeting at the patriarchal palace Sept. 30 in Tbilisi, Georgia. (CNS/Paul Haring)

Pope Francis made a veiled criticism of continued Russian aggression towards its neighboring countries on the first stop on a two-day visit to this Caucasus country, calling for more respect for the "sovereign rights" of nations under international law.

Speaking in a welcoming ceremony Friday after Georgian President Giorgi Margvelashvili sharply criticized Russia's actions following a 2008 war between the countries, which left two regions of Georgia occupied by Russian-backed separatists, the pontiff also called for freedom of movement between the occupied areas and the rest of the country.

Francis told Margvelashvili and Georgia's political leaders during the event at the country's presidential palace that peaceful coexistence between countries requires "mutual esteem and consideration, which can never lay aside respect for the sovereign rights of every country within the framework of international law."

A diverse, multicultural society requires that people "coexist peacefully in their homeland, or are free to return to that land, if for some reason they have been forced to leave it," the pope added.

In 2008, Russian troops crossed the northern border of Georgia, which had been part of the former Soviet Union, to prop up separatists in two regions of the country, South Ossetia and Abkhazia, which now claim independence and have separate de facto administrations.

South Ossetia is located only about 25 miles north of Tbilisi, the capital of Georgia, and is bordered now by several-feet-high barbed-wire fences that have cut off access between communities and even families.

Margvelashvili made note of that fact in his welcome to Francis, telling the pontiff that just north of the presidential palace "there are human beings that every day commit acts of violence, kidnapping people, killing, and committing wounds that deeply harm dignity."

"Today you are in a country ... that is the victim of military aggression by another state," the president told the pope. "Twenty percent of our territory is occupied and 15 percent of the population are internally displaced persons."

"Yet, despite everything, we do not look for payback but only for the way that will bring our country to liberation from foreign occupation and to peace," Margvelashvili said.

"The return of the internally displaced persons is our first and fundamental work," he said. "Human persons must not suffer due to political situations and must have the right to return to their homes."

Francis is visiting Georgia Friday and Saturday as part of a three-day visit to the Caucasus region, which is between the Black and Caspian Seas on Turkey's northeast border and Russia's southwest. The pope will travel Sunday to neighboring Azerbaijan before returning to Rome that evening.

In the weeks leading up to Francis' visit, Georgian diplomats had expressed hopes that the pope would speak out against the Russian-backed occupation in order to draw international attention to the continuing political situation in the country.

Margvelashvili nodded to those hopes in a reference to the upcoming 26th anniversary of the formal reunification of East and West Germany following the collapse of the Soviet Union, which will be celebrated Monday.

"Unification was made possible thanks to the unity and involvement of the wider international community," said the Georgian president. "Humanity was able to resolve an important political question and restore historical justice without violence."

"I believe that the involvement of the international community ... to not recognize this state of things and to not tolerate aggression will be the guarantors of liberation of the occupied zones of our country and of peace in our region," he said.

Beyond political dimensions, Francis' visit to Georgia has been mainly organized as an ecumenical encounter. While the country has a historic Catholic community, about 83 percent of its population of some 3.7 million belongs to the Georgian Orthodox church, an autocephalous Eastern Orthodox community.

Relations between the Catholic and Orthodox communities have been strained at times.

Paulist Fr. Ronald Roberson, associate director of the U.S. bishops' Secretariat for Ecumenical and Interreligious Affairs, said in an interview earlier in the month that the Catholic church's relationship with the Georgian Orthodox is "one of the most difficult" among its relations with other Christian communities.

Roberson noted that some in the Georgian Orthodox community subscribe to a school of thought that "there is nothing outside the visible Orthodox church but darkness."

Such thinking was put on display during the pope's arrival at Tbilisi airport Friday, with groups of protestors holding signs against Francis' visit. One bluntly read: "Pope arch heretic, you are not welcome in Orthodox Georgia."

In a meeting Friday afternoon with Patriarch Ilia II, who has led the Georgian Orthodox since 1977, Francis said both faith communities are confronted with a world "thirsting for mercy, unity and peace" that calls them to "ardently renew our commitment to the bonds which exist between us."

"The love of the Lord raises us up, because it enables us to rise above the misunderstandings of the past, above the calculations of the present and fears for the future," said the pontiff. "The multitude of saints ... encourages us to put the Gospel before all else and to evangelize as in the past, even more so, free from the restraints of prejudice and open to the perennial newness of God."

For his part, Ilia said that over the past decades the Georgian Orthodox and Catholic communities "have lived with brotherly love and we will continue this affection."

The patriarch, who has Parkinson's disease and struggled to speak, also noted the political separation of his country. Mentioning that he served as the head of the metropolitan see of now-occupied Abkhazia before being elected patriarch, Ilia said: "I can hardly recall any conflict between the Abkhazians and the Georgians."

"This is an artificially created and concocted conflict," said the patriarch. "We believe these conflicts will be overcome."

Francis' visit to Georgia continues Friday evening with a visit to the local Assyrian-Chaldean community, one of three Catholic groups in the country. On Saturday he will celebrate a Mass at a local soccer stadium in the morning before visiting the Georgian Orthodox's Svetitskhoveli Cathedral, the spiritual center of their community.