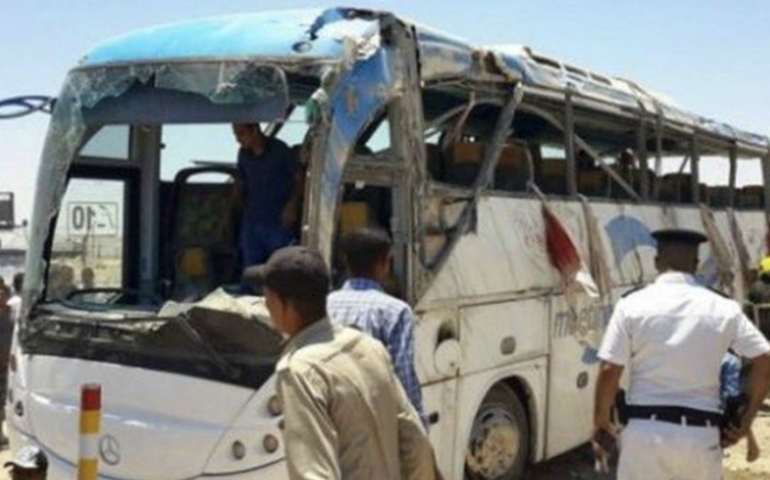 Authorities inspect the aftermath of an attack on buses and a truck carrying Coptic Christians in Minya Province, Egypt, on May 26, 2017. (Screenshot from video)

Gunmen attacked buses and a truck taking a group of Coptic Christians to a monastery in southern Egypt on Friday, killing 26 people and wounding 25 others, witnesses and the Health Ministry said.

Eyewitnesses said masked men stopped the two buses and a truck and opened fire on a road leading to the monastery of Saint Samuel the Confessor in Minya province, which is home to a sizeable Christian minority.

Security forces launched a hunt for the attackers, setting up dozens of checkpoints and patrols on the desert road.

The grand imam of al-Azhar, Egypt's 1,000-year-old center of Islamic learning, said the attack was intended to destabilize the country.

"I call on Egyptians to unite in the face of this brutal terrorism," Ahmed al-Tayeb said from Germany, where he was on a visit.

Coptic Christians, who make up about 10 percent of Egypt's population of 92 million, have been the subject of a series of deadly attacks in recent months.

About 70 have been killed since December in bomb attacks on churches in the cities of Cairo, Alexandria and Tanta.

Those attacks were claimed by Islamic State. There was no immediate claim of responsibility for Friday’s attack.