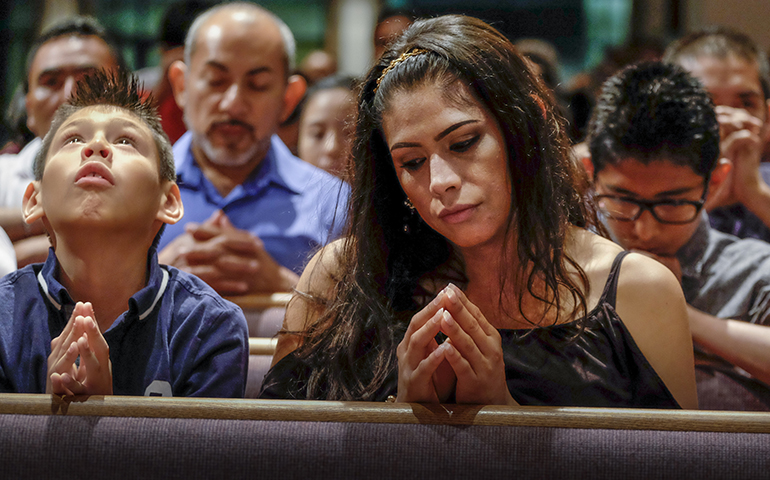 Xavier Albarran, 9, and his mother, Erika Albarran, pray during the Litany of Saints at a Mass celebrated July 27 by Bishop David Choby of Nashville, Tenn., for the dedication of Sagrado Corazon Church at the Catholic Pastoral Center in Nashville. (CNS/Tennessee Register/Rick Musacchio)

Hispanic Catholics have an inconvenient truth for the church in the United States: We are no longer the minority.

And this emerging majority is organizing the largest evangelization effort the U.S. church has yet to see, as Latinos prepare for the V Encuentro -- a four-year conversation beginning at the parish level and ending on a national stage in 2018.

With guidelines distributed to 5,000 parishes throughout 175 dioceses, the process is meant to gauge pastoral realities within Hispanic communities while inspiring new leaders among youth.

Though 40 percent of U.S. Catholics are Hispanic, that number spikes to 60 percent when looking at those younger than 18 -- making these conversations not just relevant to the Hispanic community, but to the future of the entire U.S. church, too.

The Encuentro is a process. It begins with conversations in parishes conducted throughout five sessions and then reported to the diocesan level. Each diocese then sends representatives to their respective regions, and regional delegates are later sent to the national event, where all the reports and conversations are discussed and reflected upon with the thousands in attendance, this time in Dallas in 2018.

In response to needs articulated by priests and Hispanics throughout the country, the U.S. Conference of Catholic Bishops helped initiate the first Encuentro in 1972, as a way to establish leadership among a demographic that had, until then, felt like they were merely in the church's background, said Helper of the Holy Souls Sr. Dominga Zapata.

"By the second Encuentro [in the mid-1970s], no longer was that the reality. We had awakened all those people," she said of the bishops' conference and subsequent assignments of Hispanic bishops. "We took over."

By 1985, the focus of the III Encuentro had shifted away from Hispanic ministry; integration, rather than assimilation, became the objective. From this Encuentro came a pastoral plan, as Latinos (typically a "spontaneous culture," Zapata noted) also attempted to relate to the larger culture by getting organized.

"We have grown so much," said Estela Villagrán Manancero, director of the Office of Latino Ministry for the St. Paul-Minneapolis archdiocese, and president of the National Catholic Association of Diocesan Directors for Hispanic Ministry.

So much that, for the IV Encuentro in 2000, the bishops' conference suggested that Latinos invite all U.S. Catholics to participate in the four-year conversations leading up to that event.

"We can put goals and objectives toward the Encuentro, but what is exciting is that we really don't know what is going to come up -- not until we do the consultations with the people," Villagrán Manancero said.

The V Encuentro brings Latinos together in ways that Anglos do not get together and couldn't if they wanted to, ridden with ideological divisions.

Why is that? After all, Latinos are also citizens, participating in the country's political discourse with their own biases and ideologies. In fact, their ideological disagreements are on top of the vast cultural differences they're already working through as Hispanics.

Hosffman Ospino, director of graduate programs in Hispanic ministry at Boston College School of Theology and Ministry, summed it up with one word: privilege.

"When you are educated, when you find yourself entitled to express your voice and to be listened to, when you find yourself in a position that you know through your role or your participation in the democratic process or in the church dynamic process that you are heard, then people feel that whatever ideological perspective or stance they have in life will be important to make a difference."

Not to suggest that Latinos don't have agendas, he added.

"However, most Latinos in the U.S. -- still the case in 2016 -- are on a survival mode, in society and in the church. In the Catholic church, we still treat Hispanics as a minority," he said. "We still treat Latinos kind [of] like the small child: Latinos don't get consulted, few people write about us, few invite us to write or engage in conversation, and so forth."

"So Latinos, in a sense, are relegated as a community to the margins of society, even within our own church," said Ospino, who was instrumental in developing the consultation guide for the V Encuentro. "Being perceived as a minority kind of takes away a lot of the voice that we have. ... This Encuentro process is going to provide a voice for Latinos."

Just as the U.S. church in the past was built upon by the efforts of Irish, Italian or German immigrants, said Fr. Rafael Capó, executive director of the Southeast Pastoral Institute, it is now time for Hispanics to feel supported and recognized by their fellow Catholics, as they become the new generation of leaders.

"If we don't empower them and create structures and spaces for them, we're going to have big problems in the Catholic church," he said. "We're running late. The numbers are here. But we can still do a great lot, and the process of Encuentros can help."

Previous conversations from Encuentros have focused on immigrants; this time, it will be on second and third generations, as immigration to the U.S. slows while Latino families grow. Of the 60 percent of Hispanic Catholics under the age of 18, 90 percent of them are U.S.-born.

"That's the population that is for some reason falling into a little bit of a gap, because they are not being reached out as immigrants, and then mainstream Catholicism pretty much assumes they've become Americanized, and that's not the case either," said Ospino. "Through this process, we want to figure out a strategy, an alternative to ministry, that engages them in the best possible way."

In 2006, a special Encuentro was devoted to youth ministry, intended to discern how to best respond to their needs and aspirations. But 90 percent of those who participated consisted of first-generation Americans, Fr. Alejandro López-Cardinale said, adding the need to revisit those conversations.

"This is a 'shake it up' time for all institutions working in Hispanic ministry. The structures respond to needs that we had 10 years ago. That was fine, but we're not 10 years ago. Now we have new challenges," he said, adding that it's also imperative for ministry to look at professional, not just pastoral, outreach. "Areas of business, politics, economics -- the whole spectrum of civil society."

Santiago Cortés, director of curricula development at Loyola Press, said he hopes the discussions leading up to 2018 will allow Hispanic Catholics to "see themselves differently in this country. It's a change of awareness, of identity, so we don't see ourselves anymore as, 'We're not being served.' Instead, that we're here, with gifts, so how can we serve the church?"

Lumped into the catchall "Hispanic" or "Latino" label are people from 22 countries throughout Latin America, those ties ranging from first- to fifth-generation Americans. As the Midwest deals with absorbing new arrivals of Mexicans or Central Americans, Villagrán Manancero said, California is tending to the third generation, where English is already a custom.

"While California has been dealing with this for decades, we're just getting started," she said of her archdiocese in Minnesota. "And we're still learning how to adapt to understand these new realities. Me, being from Uruguay -- I had to learn how to speak the Mexican Spanish because most of my community is Mexican."

Such diversity of backgrounds, cultures and experiences not only poses ministerial challenges, but also questions related to identity.

At the 25th annual conference of the National Catholic Association of Diocesan Directors for Hispanic Ministry, held in St. Louis July 18-21, Bishop Gerald Barnes of San Bernardino, Calif., illustrated that complexity. He recalled growing up as a third-generation in the 1960s, when discrimination against Latinos was unabashed, but when church ministry catered to the immigrant population -- leaving him in a cultural limbo.

"There's this spectrum of being Hispanic," he said. "Some are born on the Hispanic side, others on the American side, and that poses a difficulty for us wanting to work with catering to Hispanics: Who are we talking about? Who are the Hispanics? Who do we want to listen to for this Encuentro? Which group?"

Hispanic youth today, he said, are more familiar with El Chapo than they are with César Chávez -- demonstrating their profound lack of understanding of the realities that previous generations have lived, as well as the lives of immigrants arriving today. "They don't know the Hispanic story," he said. "Nor do their parents. So who is telling them the story?"

"Even though we identify and know there are differences, there's much more in common, that differences aren't really an obstacle when we need to sit at the table and work on what's important to create communion," said Capó. "We celebrate the differences as part of our colorful spectrum of life and heritage, language and cultures. And faith is a common thread that unites us."

A version of this story appeared in the Aug 26-Sept 8, 2016 print issue under the headline: Hispanics chart pastoral direction.